A week and a day since we made landfall in Vanuatu on the island of Tanna. It feels like a month. Rahmasan nup nup-an means, “Hello, good morning!” in Port Resolution (the dialects are specific to each village, so this particular greeting doesn’t work a few kilometres away). Here’s our anchorage – that’s us on the far left. 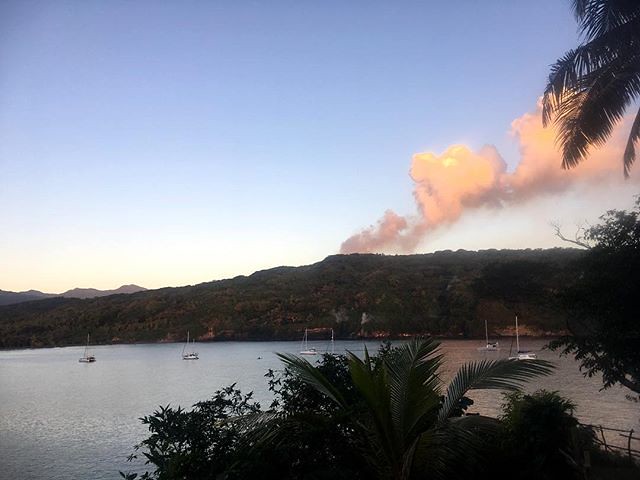 And this is where we come ashore in Foamy, pulling up on the coral alongside the local’s outrigger canoes – carved from breadfruit trees. 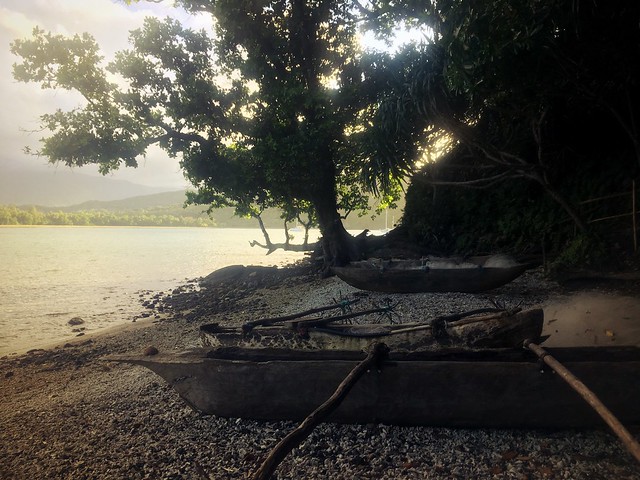 We’d applied for prior permission to enter the country at Port Resolution – not one of the official check in points. This was granted, and our check in was island style. This is the Port Resolution Yacht Club where our passports were stamped and forms filled out. It did remind me irresistably of the A-Frame on Middle Percy Island. 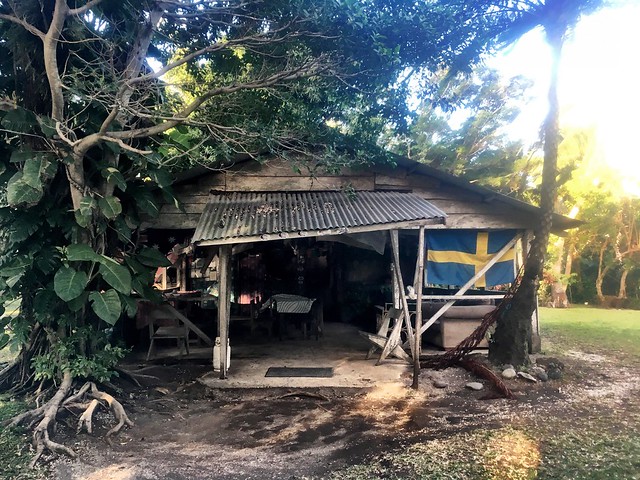 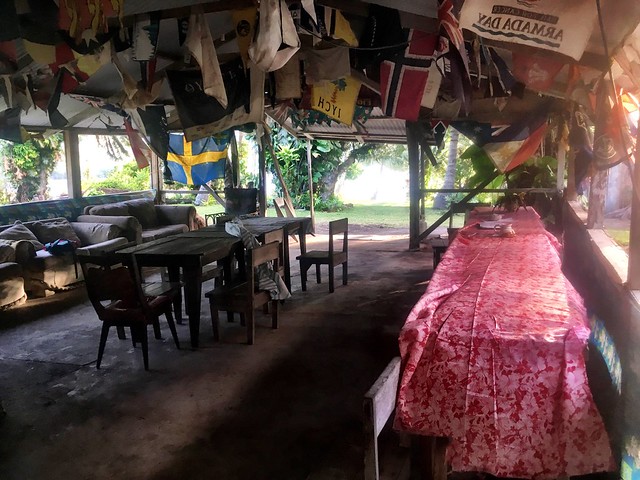 The captains took care of the admin. The rest of us watched a guy scale a 50 foot coconut tree, send about eight coconuts plopping to the ground – then he did some super nifty machete work and we were all drinking amazing coconut water. More nifty machete work, and using a spoon cut from the coconut, we were able to eat the flesh. DELICIOUS. 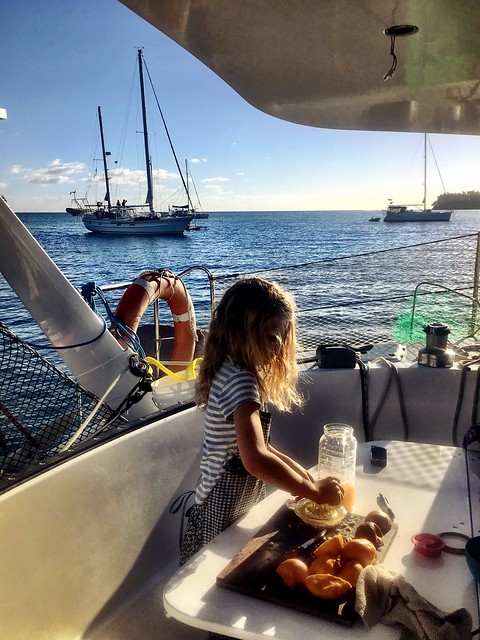 [The above photo is of Small DB, squeezing all our oranges, because we thought they might be confiscated by biosecurity. Pandion is in the background – double masted ketch.] 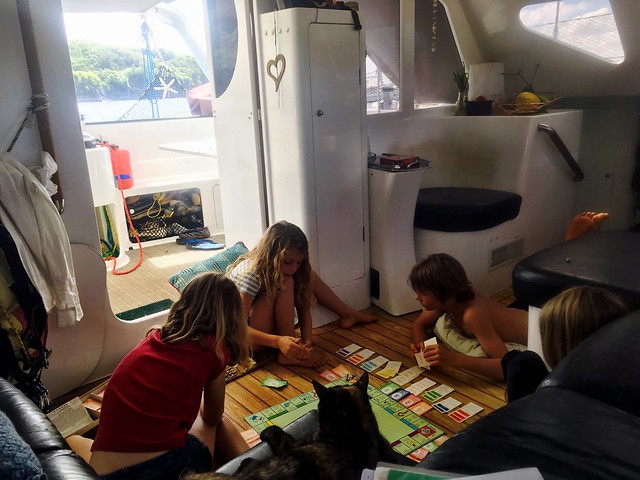 The morning after our arrival our friends on Paws and Pandion had also dropped anchor. Andi (captain of the former) has vast reservoirs of enthusiasm, which is good for people like me, who get to surf along the edges of it. He organised to get a ride into Lenakel, the main town on Tanna, with the intention being to go to the market and get Vanuatu SIM cards.

Along with Andi, and his wife Gemma, Miles (Pandion), Stanley and George (locals), I hopped in the backseat of the ute and was driven the 90 minutes to Lenakel. I was glued to the window the whole time – we passed many little villages, and the vehicle stopped several times to let people jump in the back with Gemma and Andi. I saw a house in a tree (literally, not a treehouse, but a house that had been very obviously PUT up a tree) and scenery that was lushly fecund.

Which was in TOTAL contrast to the area directly around Mt Yasur, the active volcano. The whole mountain is a dark slate grey, covered in ash that runs down into ash plains that are bordered by foliage that looks all the more green for being in contrast. 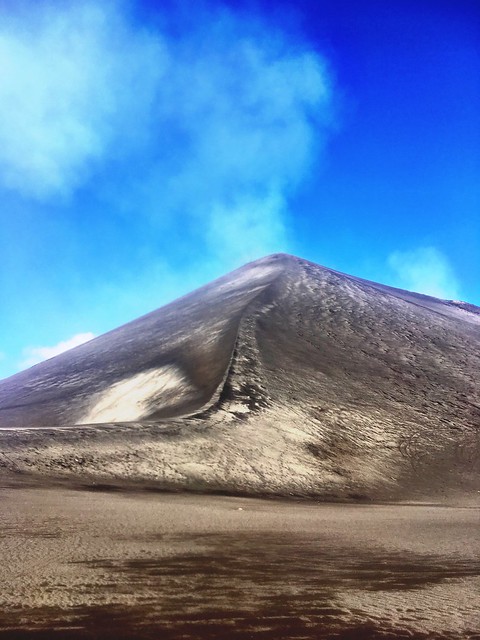 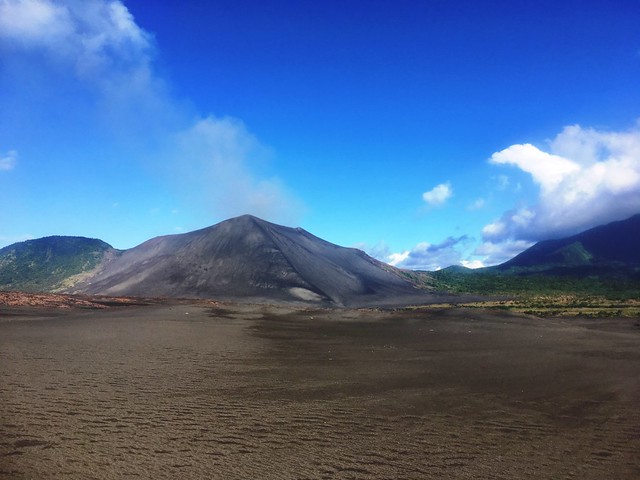 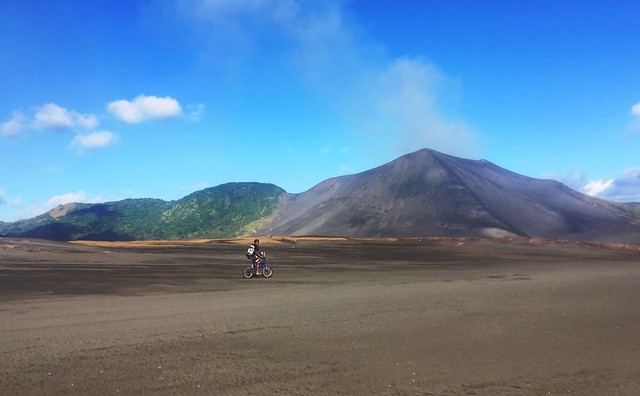 The road to Lenakel was a mixture – from a bush track, to tyre-marks on the ash plain, to steel reinforced concrete to an unsealed surface high on a hill —-> there were roadworks going on in a few different spots. I saw some evidence of Australian aid, but a lot of the work was being done by a company called ‘Downer, which, on idle googling, is a global company with links to Adani. Which I can’t imagine is a good thing. However…

I had no idea what to expect in Lenakel, but had come up with an idea anyway, informed by absolutely nothing. I assumed it would be quite urban, with sealed roads, cheap bargain shops with plasticky crud, and maybe a few seedy looking internet cafes.

There less than ten shops in Lenakel, one being a hardware shop, the customs office, another being a shiny new bank, and the others appearing to be general stores. The roads are dirt. It was all quite awesomely ramshackle and beautiful. Bougainvillea in all shades, huges trees… Miles and I were standing in the shade when an imposing looking man approached us, shook our hands very firmly, and welcomed us to the town.

The market was a revelation – particularly coming from Noumea, where we had shopped regularly at the market, wincing at the prices. A large amount of the produce in Noumea was imported from New Zealand, and to a lesser extent, Australia. Here on Tanna – it was local all the way baby! And VERY cheap. 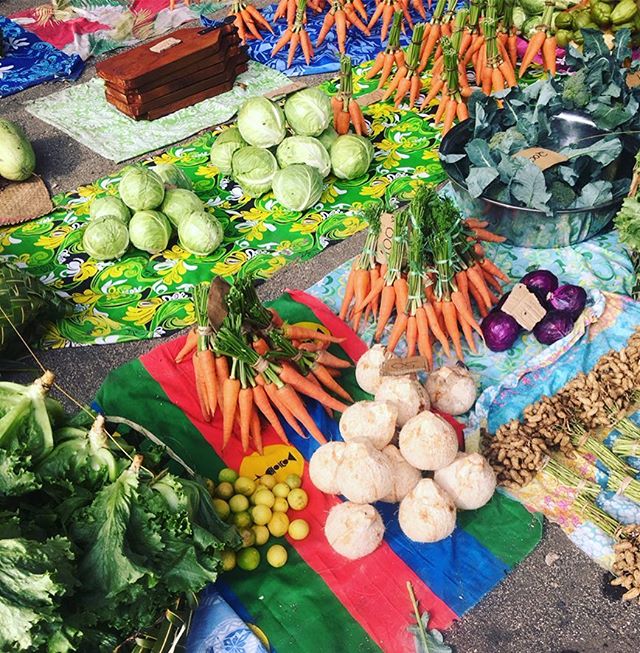 See that pile of cutting boards? I knew they were something to do with coconuts, but it wasn’t until I saw a guy back in a village in Port Resolution that I understood that you put the board on a stump/stool, sit on it, and then scrape the coconut from the shell on the metal at the end. Impressive.

We walked about 1.5km to get to the Tanna Coffee factory. On the way, we asked directions from a guy in his front garden. When I say ‘front garden’ – it seems that a lot of people on Tanna live with their extended family, all having huts on the same piece of land with a large area of common space in the middle. We had a lovely chat with the man, whose brother used to manage Tanna Coffee, and he said we could wait a while at his place because the factory would be closed for lunch.

We eventually made it to the factory and belatedly discovered that not only can you not get a coffee there, that the beans are dehusked and dried there, but are then shipped to Port Vila to be roasted. D’oh! It was interesting to look around the little factory though, and see all the beans drying in the sun. They were the colour of a strong latte… 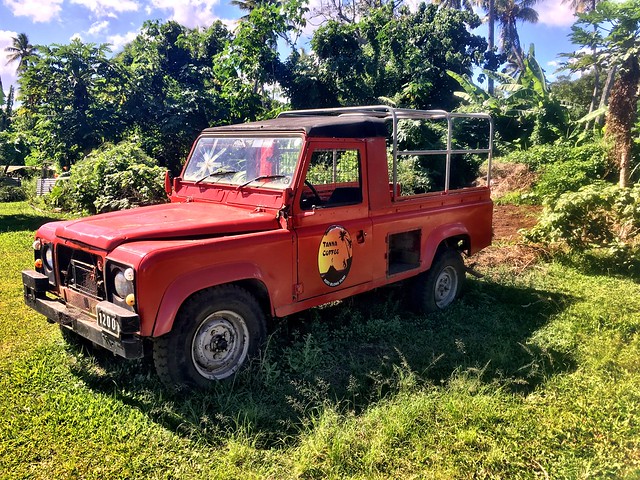 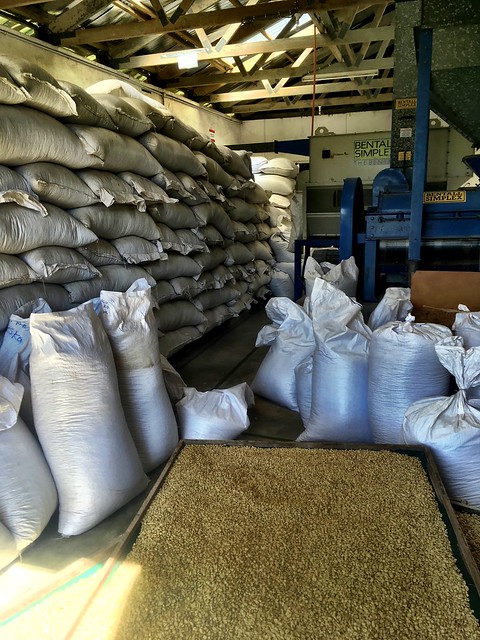 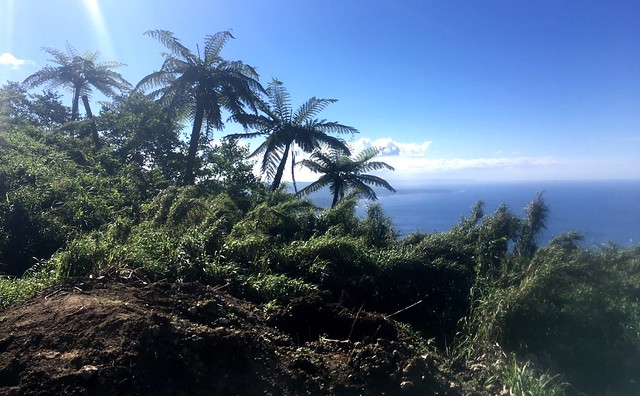 Once we got home from our very long day, we all went out to dinner a little restaurant we had booked the day before. I won’t post which one it was – the food was great, and the hosts were wonderful. However, ten out of twelve of us slowly succumbed over the following three days to fever, chills, vomiting and diarrhoea (it’s scary how easily I type that last word – all those years of typing medical histories leave some things ingrained).

The worst bit was staggering out into the cockpit to be sick over the side, not making it and vomiting into a bucket – in between heaves I could hear M snoring through the hatch. I’m not sure what would have to happen to me to make him wake up and assist – a degloving perhaps? A broken limb?

Anyway, I remained on the boat for at least three days, flat out, having my very own pity party. The Smalls and M recovered before I did, and went on an amazing excursion to see into the heart of Mt Yasur. Their geology lesson for the year…

The morning after their grand adventure, I went and spent the morning just sitting on the couches in the yacht club, while the Smalls played with the kittens, and made their own hilarious documentaries called ‘CatFinder’ and ‘ChickenFinder’.

The other inhabitants of the Port Resolution Yacht Club… 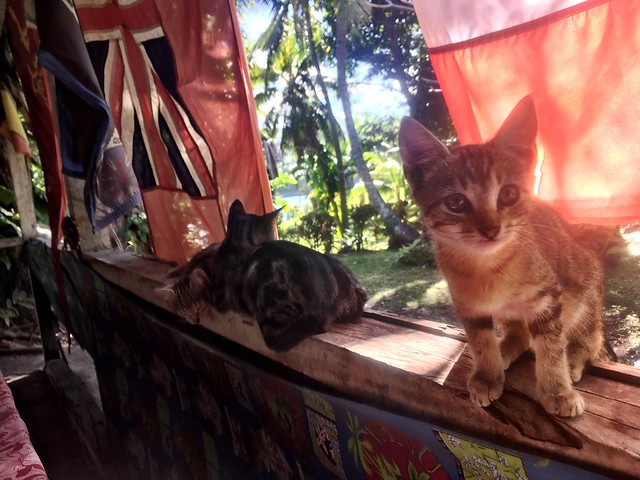 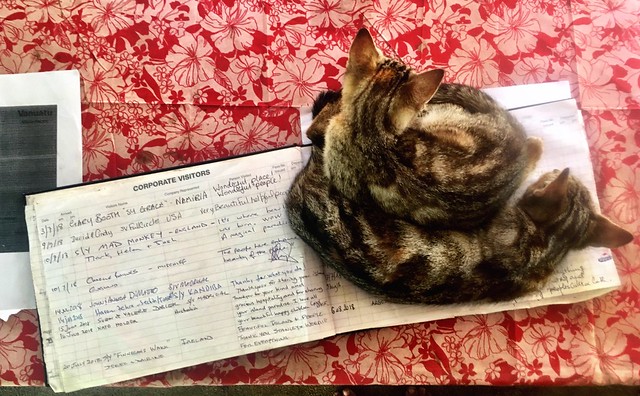 The huge tree with the rope swing in the village just behind the yacht club. 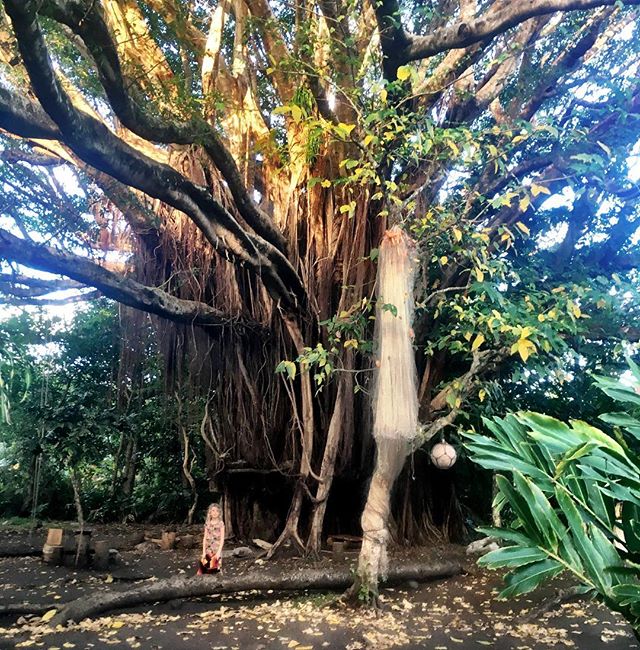 The view from inside Leah’s Restaurant… 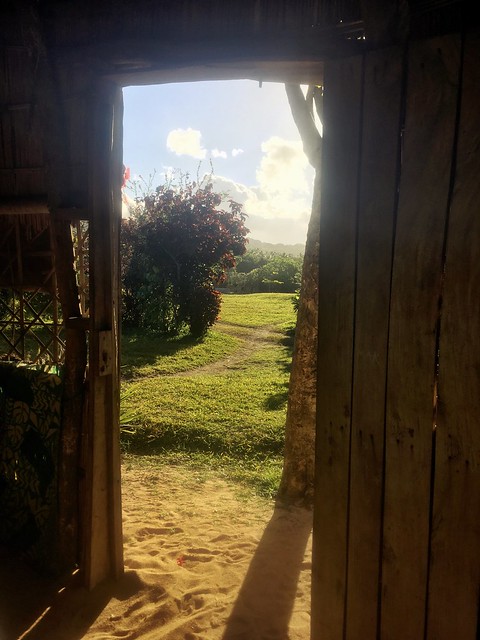 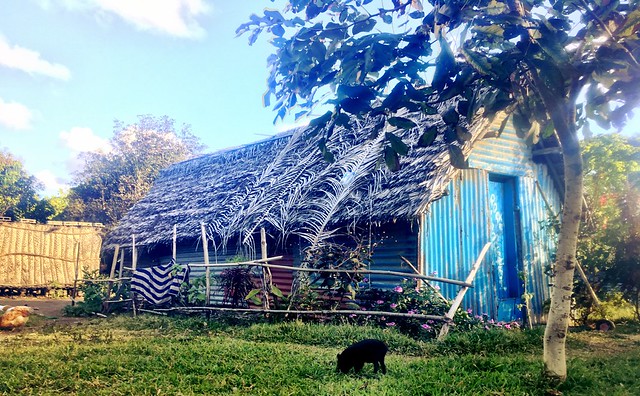 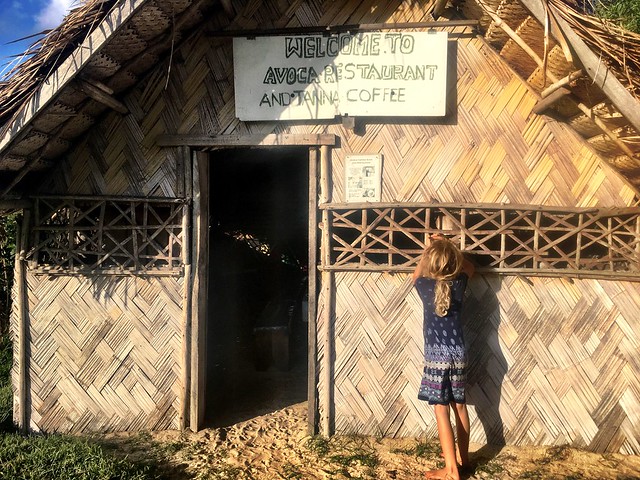 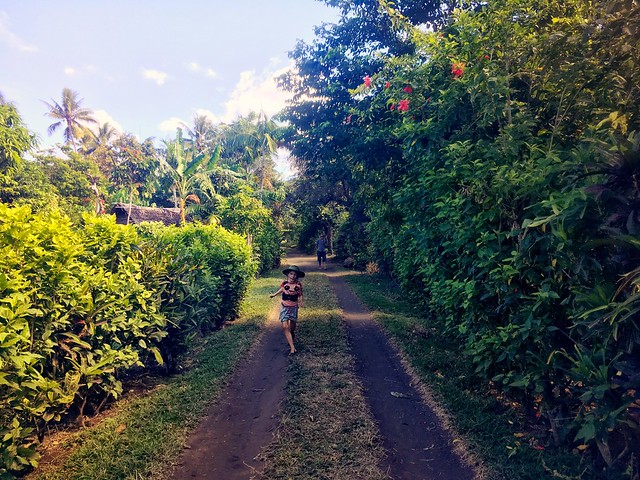 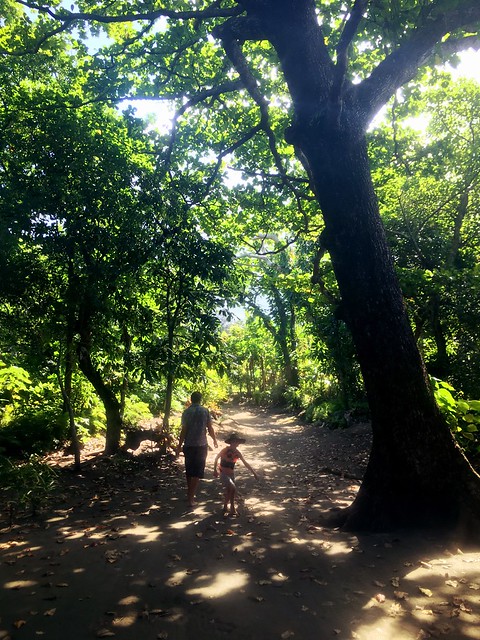