“We’ve got a couple of choices,” said M, as we sat on the sand at Bayview yesterday afternoon. “The weather is pretty much going to be ballistic for the next week, which means we’ll have to stay in Pittwater, or…”

“Or we can leave early in the morning before the ballistic really kicks in and head around to Manly.”

“Well, it will be a pretty full on passage. We’ll be heading to windward. It won’t be comfortable. But it will be a good experience for heading overseas – and we’ll be in Manly by mid-afternoon.”

“OK,” I said blithely, knowing that was his preference and also unable to ignore the logic, “Let’s do that then.”

And so it was that early this morning (but not early enough) we were up trying to make everything shipshape and secure. Just before 7am as we were about to leave, we discovered that we were out of drinking water. BAH! #fail

M rowed over to the park with our 20L container, I made banana porridge and hard boiled some eggs for the journey. Normally, for a potentially suspect passage, I would have some museli bars, corn chips – easy munchy things – but not this time.

But no matter – it was only going to be four or five hours, right? Right.

To cut an epic story a little shorter, here’s list of what we DIDN’T do and SHOULD have: 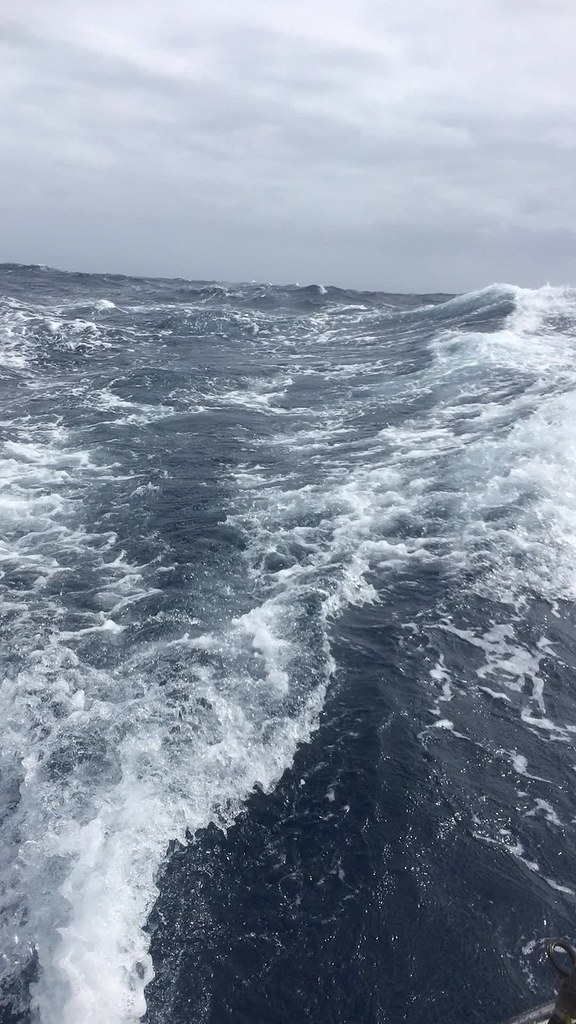 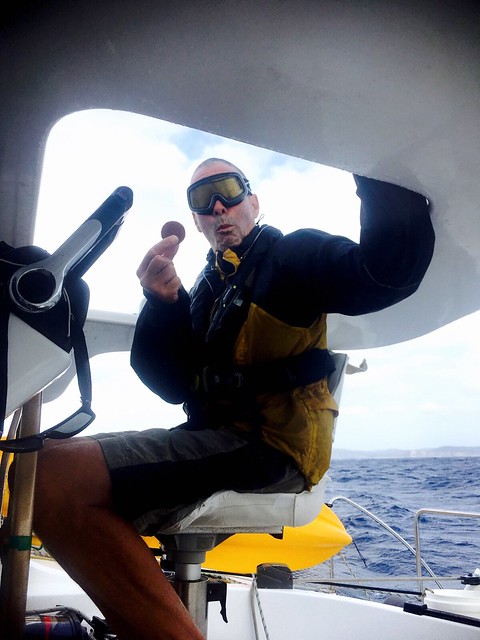 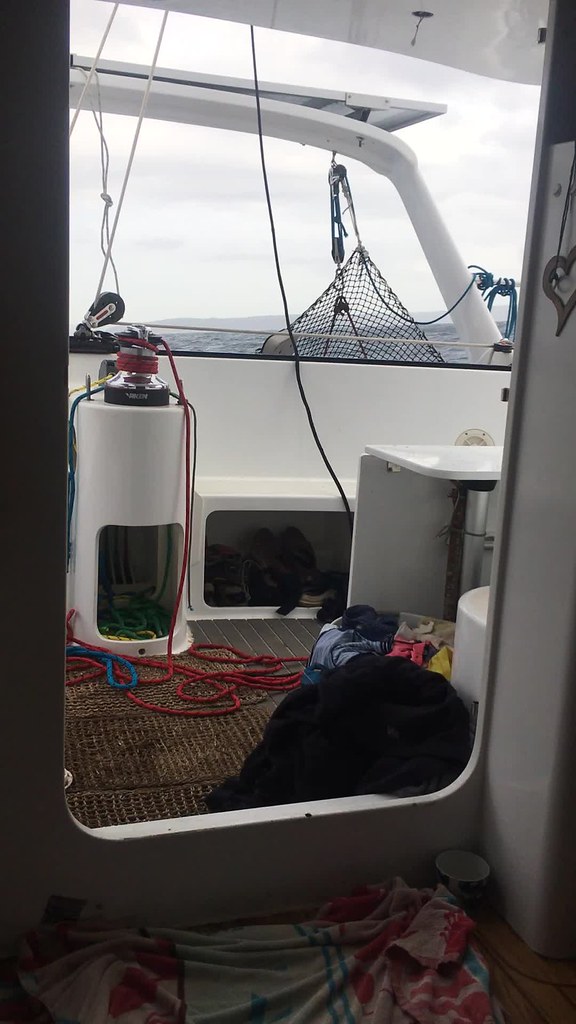 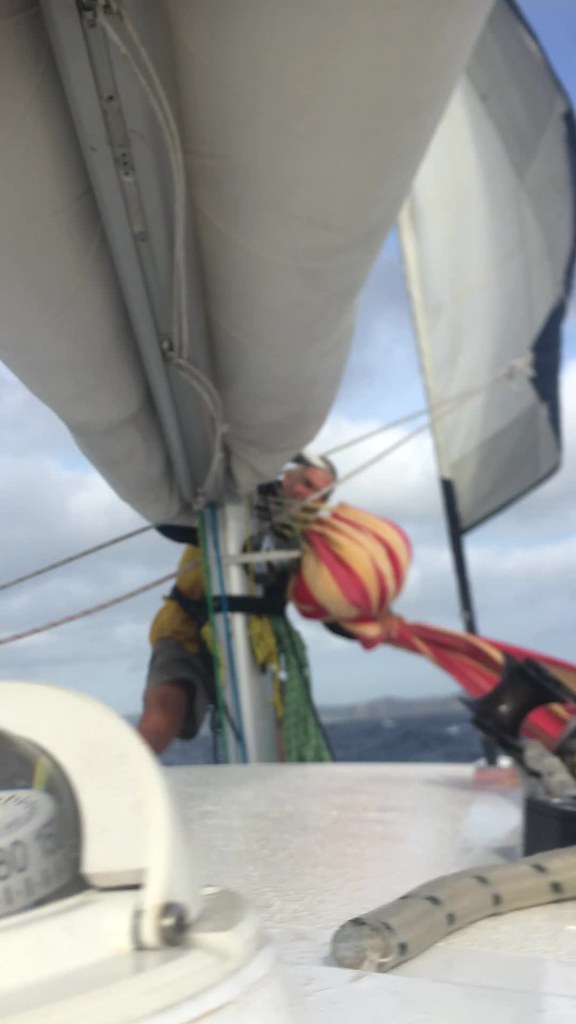 Words from Captain M
[as dutifully transcribed by moi]

The boat handled it beautifully, averaging eight knots to windward, fully reefed in breaking waves. It gave us great confidence in the boat – not that we would ever go to windward by choice, ever. It gave us a good window into how lazy/complacent we have become.

Far better to happen en route to Manly than between Middleton Reef and New Caledonia. It was pretty epic today, but the whole idea (I did enjoy the sailing – I like to sail) is that you get yourself out there in 25 to 30 knots, get over your anxiety when you work out the boat is doing well, and the next time you find yourself in that situation, have everything a lot more sorted – we’ll be more dry, warm and comfortable and less anxious about the boat.

Autopilot worked really well with the new steering system. It coped with hours of big crashing waves. The boat didn’t slam much at all* because it’s quite light. The humans definitely got trashed, but the boat excelled. And Honey the Cat did really well. And I just want to put a really positive spin on it, because we learnt a lot. 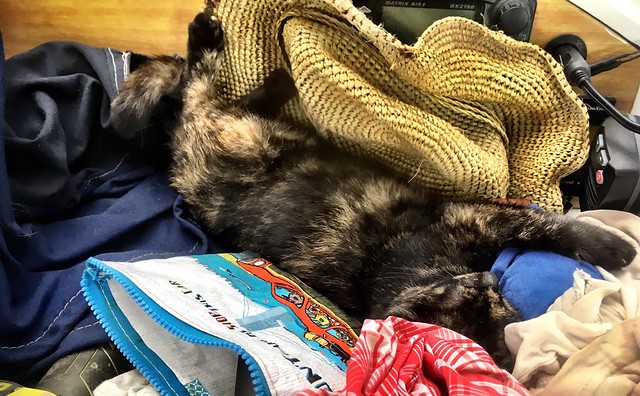 Far be it from me to detract from any positive spin, but Small Z pointed out that today broke her 18 month no-vomit record. Small DB spent the day (before and after hurling) looking like a gaunt and whey-faced plague victim, clutching her bunny and patting Honey. I heaved over the side a few times, but nothing came up. During the last hour the two Smalls (stomachs purged) fell asleep on the couch and I fell asleep on a wet towel on the cabin floor while M steered bravely onward. 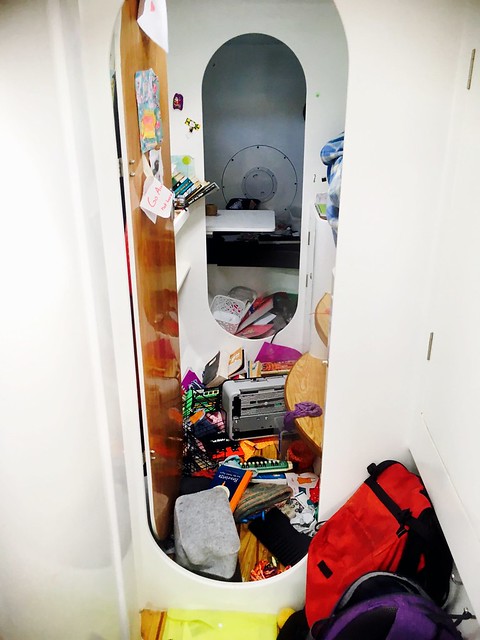