Boat life, for me, has always felt incomplete without a cat. In many of the books I have read about people living on boats, there has been a cat – sunning itself on deck, occasionally doing an acrobatic leap for a flying fish, sitting on your lap under starry night skies as you scan the horizon for Large Ships, check your progress and sip hot tea.

The incomple feeling was exacerbated last March, when we were privy to the discovery and capture of four wild kittens under our friend’s house in Franklin, Tasmania. I coveted one of them, but M was firm. No cats. It would, in no particular order:

…not to mention the fact that we already have two Small creatures to take care of, so why add another?

The result being that Juleen, Ian and Rory snaffled a wild kitten they named Calamity, and we sailed away still with the cat-shaped gap.

In Nara Inlet and Hill Inlet in the Whitsundays the Smalls and I unabashedly visited other vessels that we heard had a cat onboard. I quizzed the owners, all who had varying reasons for having a feline crew-member:

By the time we got to Brunswick Heads, my cat shaped hole had taken on an obsessive quality. I signed up for alerts on PetRescue, compulsively read about #boatcats , lurked on Gatos del Mar (FB group for cats who sail/navigate) – but in spite of all my dreaming and yearning I still hoped that fate would hand me a little fuzzball, miaowing feebly on a pier, looking for love and adventures in far off lands.

Fate ignored me. Multiple messages each day from PetRescue tormented me. I began losing significant chunks of time to my hopeless #boatcat addiction. Most blogging was abandoned. (Anyone who has ever fallen in love with a pair of stupidexpenso boots and has stalked them online, trying to find them on sale or secondhand, will know of my compulsion…)

I began to scale up my hypothetical price range and boggled at what pure bred ragdolls, Devon Rexes, Tonkinese, Seal Point Siamese cost. Hundreds and hundreds of dollars. All I desired was a rescue kitten – as dark as possible (so as not to get sunburnt nose/ears) – that I could train not to fall in the water.

I would have preferred one that came with an invisibility booster (in order to hide from customs officials and save us a lot of money) but was willing to be flexible on that point. None were forthcoming.

Once we got to Yamba and decided to stay for a month or two over Summer, I was toast. Gluten free toast. It was have a boatcat or languish away on Gatos del Mar forever.

I decided it was BOATCAT TIME. Very quietly. After several deadends (some people who run cat shelters do not want one of their furries to have a life on the sea) I found two little ragdoll cross kittens in Ballina. I spoke to their owner and she was thrilled that one of them might have a career as a boatcat.

On a Friday, with two more days of the year to go, Belinda drove me, her Smalls and Small DB to Ballina. Ostensibly to do a shop at Aldi, but to also drop by and check out the kittens. By this time the male black one had proved so enchanting that the owners older son refused to let it go – which was fine with me. The remaining kitten was female and brindled kind of tortoiseshell.

The owner was not at the house when we pulled up out the front. I tapped on the sliding side door. A coffee coloured dude of about 19 appeared from a mattress on the floor. He wore a towel and a smile.

“Yeah, come in. I don’t know where she is. Running around exploring somewhere.”

He flipped on the stereo and walked around into the open plan kitchen. Meanwhile, I saw a titchy little ball of fuzz with bright blue eyes stalking its way along the carpet.

“Does she go outside?”

“Nah. The door’s always open, but she never goes out there.”

I asked the question that I later realised made the whole decision for me. “Can I take her out to show the kids in the car?”

“No worries. Just don’t let her run away.”

I carried soft tinyness out to the car – all the Smalls melted where they sat.

To cut a long story short, we took the kitten back, and then went for a mammoth Aldi stocking-up shop. Over lunch at a playground by the Richmond River Belinda and I discussed all the positives and negatives of boatcat. In the end, it didn’t really matter, it was just delaying the inevitable.

We swung back past the house and went inside. Now, in addition to cute-towel-dude, there was the kitten owner, her husband, five small kids (three of whom were triplets from down the street), and ALL of them were passing the little kitten around to say goodbye. The kitten was unfazed…the music was pumping…they all looked sad as we drove away.

Tiny gorgeous kitten sat on my lap (having rejected a ride in my basket) looking at everything. Her journey included an hours drive back and then a dinghy ride from the jetty to Bella Luna. M, who had to come and collect us from the jetty, was wildly unimpressed. But I was like the water. He ranted that we would never go overseas now, the boat would stink and it was cruel to the cat to give it a life at sea. But I was like the water…

The Smalls were transported with delight. I named her Honey. The boatcat of Bella Luna. She’s divine. And M loves her to bits… Truly. 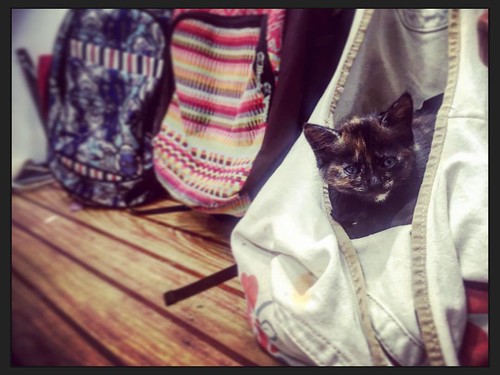 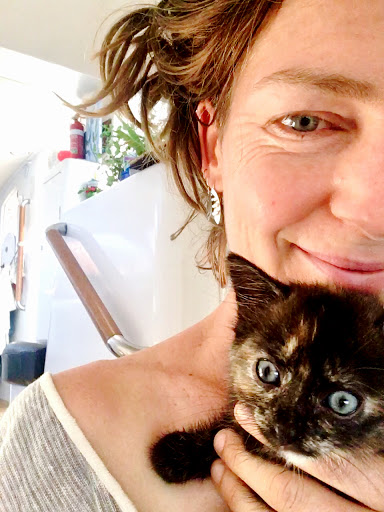