Brunswick Heads to Maclean via Yamba, a snake and Iluka

The day we left Brunswick Heads was like a reward for the many days we had waited until conditions were just right for our departure. The bar was incredibly benign and there was hardly any wind.

We were particularly excited because we had an extra crew member on board – our nine-year-old friend Marco – who was to sail with us to Yamba where we would hook up with his dad. Marco’s mum, the lovely Jen, waved us off from the breakwater as we left the Brunswick River and headed out into the ocean… Jen took the following three photos, and I’m SO GLAD SHE DID. Because we NEVER get to see pictures of ourselves from far away!! 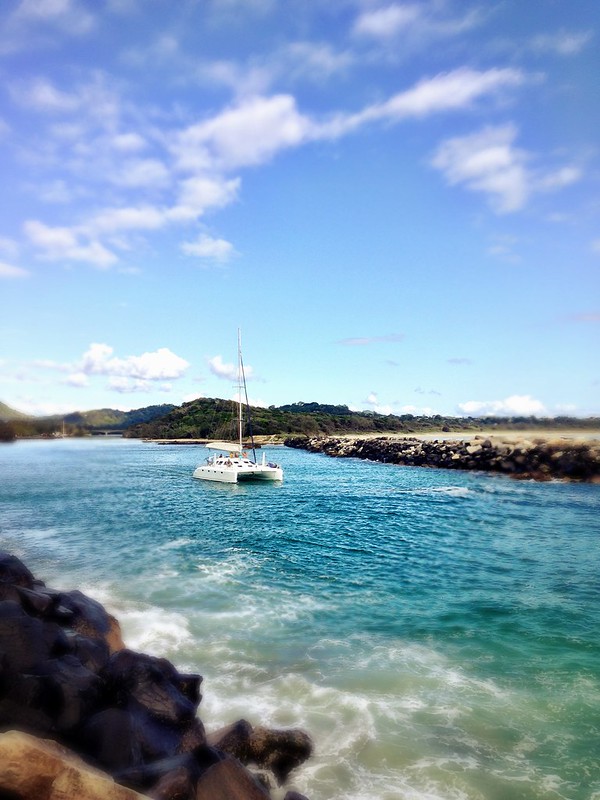 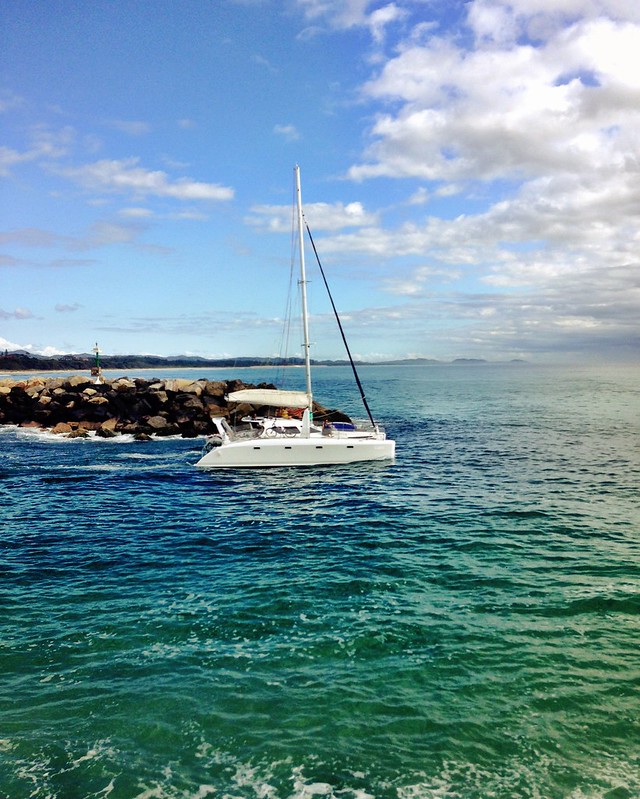 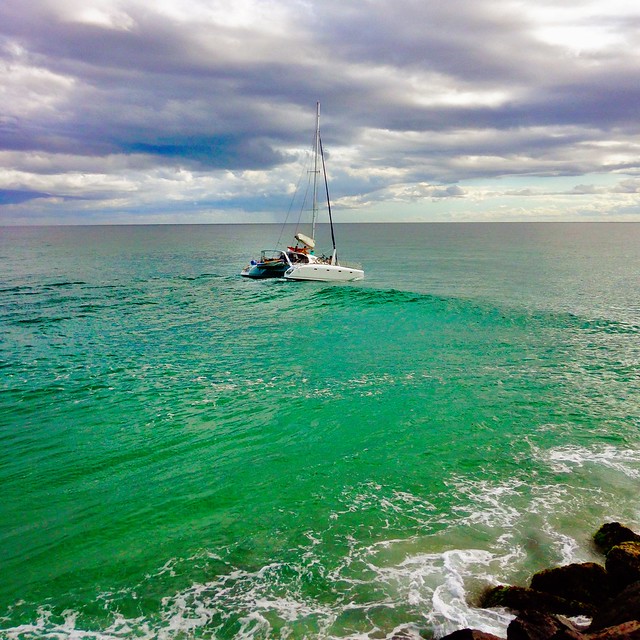 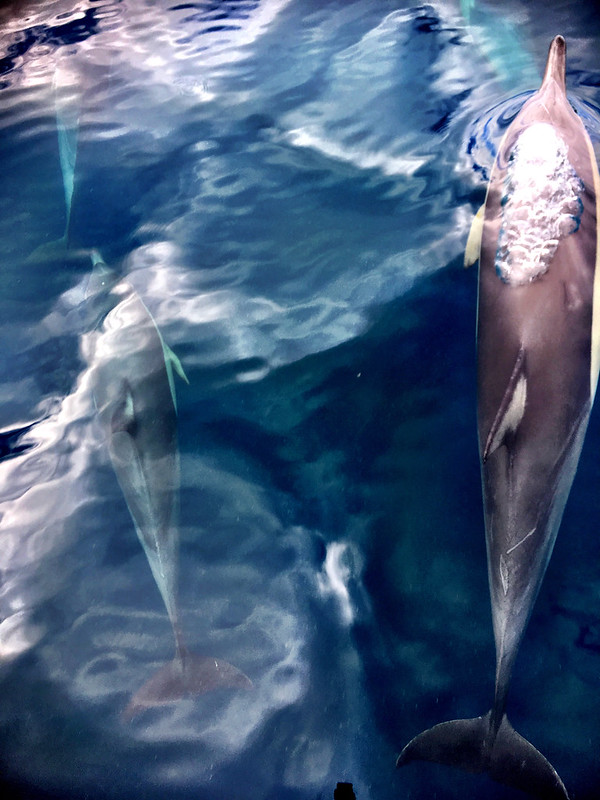 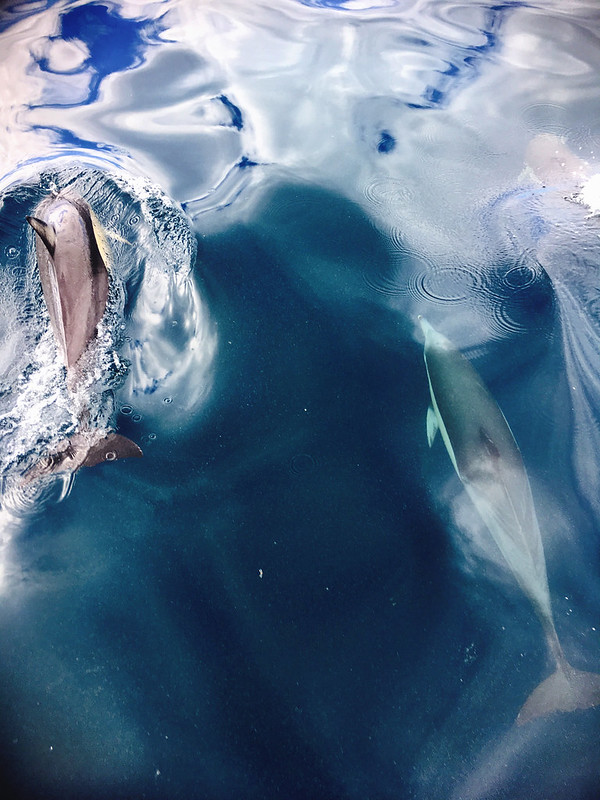 But we only went as far as Byron Bay, where we pulled in at the Pass, and took all the Smalls surfing at Watego’s. BEST. LEARNER. WAVES. EVER. Small DB busted her moves and was riding the board about 100 metres into shore (and then having to schlep herself and her board all the way back) – Marco and Small Z BOTH stood up on their surfboards for the first time…

After about two hours, the wind kicked in, which is what we’d been waiting for.

“Now,” said M to Marco, as we motored out of the way of the eastern most point of Australia, “Now you’ll see what I mean when I say that the wind will make us go faster than the motors.”

Marco and Small DB were sitting up the front of the boat, hanging on for dear life – we had the boat pointed into the wind to hoist the mainsail, spray was going everywhere – it was all a bit crazy for a little person who had never been on a boat before!!

It was only just past midday, but he had already crossed a bar, seen some dolphins, steered Foamy ashore, stood up on a surfboard and then clung to the boat as it got whacked about in the wind… He proved very adaptable, though I probably should have warned him that the whole getting-the-sails-up up stuff can seem a bit rambunctious…

The wind was our boon! Our Plan B was to pull in at Ballina, spend the night there, and then sail to Yamba the following day, but we spent a fair amount of time bowling along at about 10 knots (when we make our plans, we always estimate how long passages will take by assuming an average of five knots, so this was A Very Good Thing). 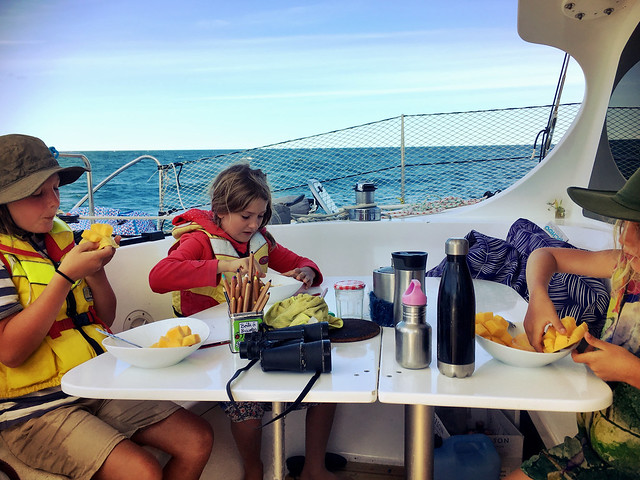 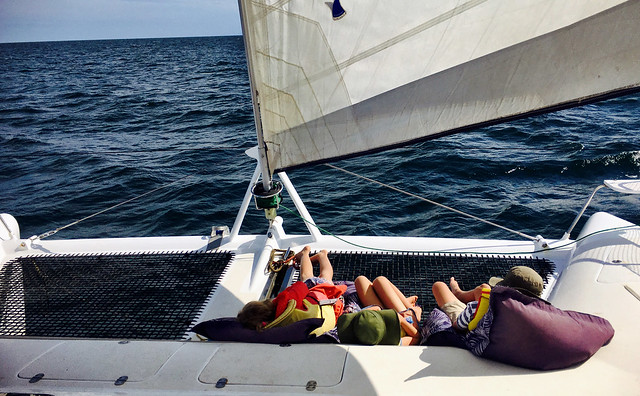 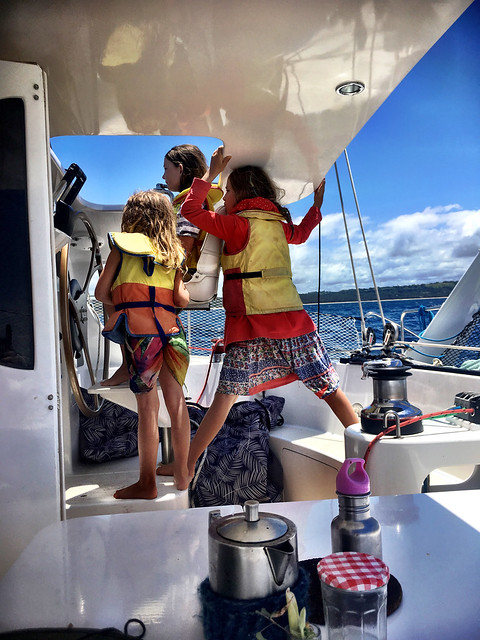 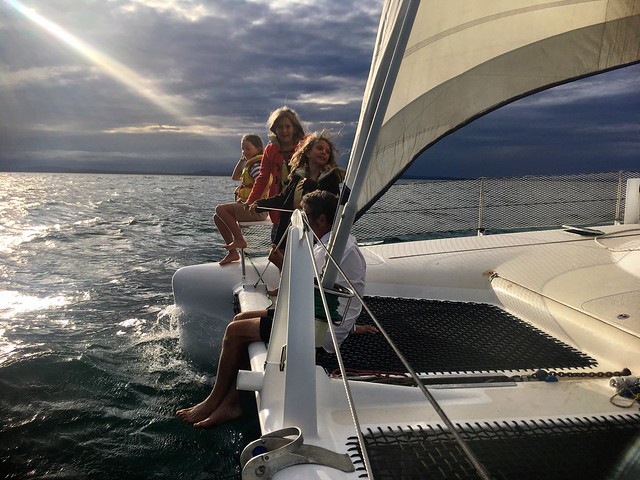 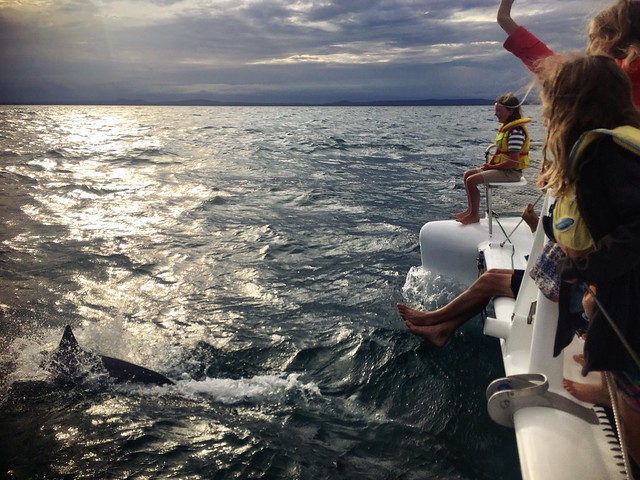 We made good time and were able to reach Yamba at about 6.30pm, crossing the bar there without a drama. 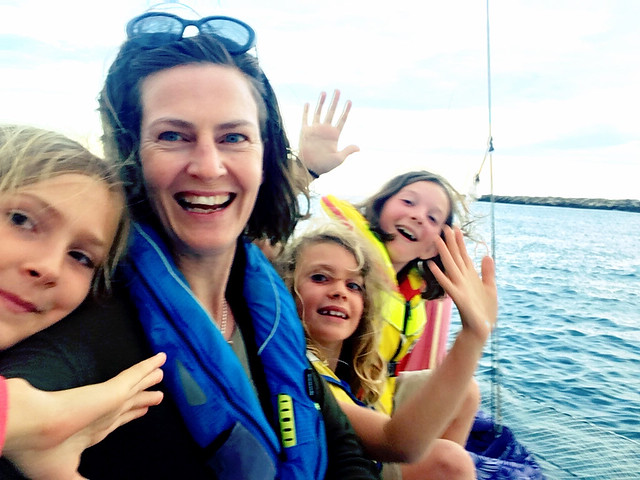 It had been a very long day – it was cheese and tomato toasties for dinner and then BED.

All Smalls were abed by 8.30pm – and just after that Jen called me to see how her baby had fared on his first day at sea. “Oh hai!” I said to her, “He’s been so great! They’re all in bed right now, so I’ll just go out into the cockpit and aaaaAAAAAHHHHHHH!!”

I trod on a snake.

I still had the presence of mind to shriek into the phone, “Marco is fine BUT I HAVE TO HANG UP NOW!”

M suspected that someone had boarded the boat, or that there was an enormous bear. Really. Then he got a grip and shone the torch outside… 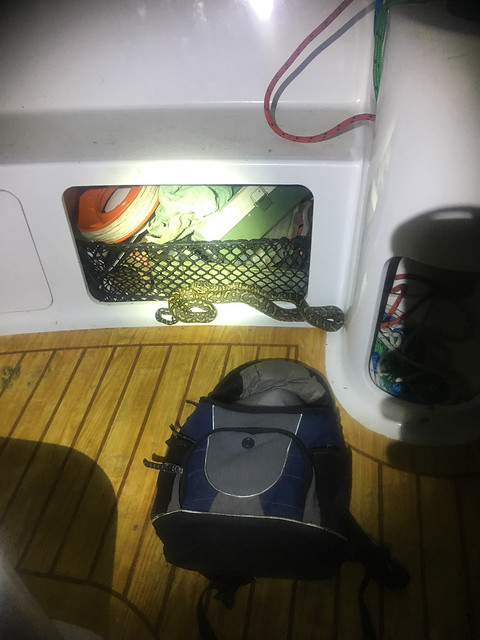 SNAKE ON A BOAT!!

Seriously. I called Jen back to reassure her that the boat had not sunk. Then I texted a photo of the snake to Ian to find out what it was (and whether it was going to try and eat us and/or poison us).

Ian. I have few words for how hilariously unperturbed his response was. M and I were sitting tensely, waiting for his message…

WHAT THE?! In true nerdly fashion he assumed we knew whether a carpet python was deadly or not. WTF? This is AUSTRALIA! Very uncharacteristically, I used the phone to actually call him. The poor thing probably missed some of Rosehaven as I shrieked mutedly (sleeping Smalls) in his ear. “IS IT DEADLY? CAN WE PICK IT UP? WHY IS IT ON OUR BOAT?”

He responded by saying it was benign. M and I had him on speakerphone as M picked up the snake and I held a pillowcase open. Yike. We were swift and successful. It was decided that we would take our snake friend ashore in the morning and Marco (who has considerable experience with carpet pythons – and who later confessed to being awake in his bunk the whole time) would pick it a suitable habitat.

I slept in with Small Z who had snake-on-a-boat fear. M slept solo. Marco and Small DB had the bunks. Snake slept in a tightly knotted pillowcase in the cockpit. And all was well. 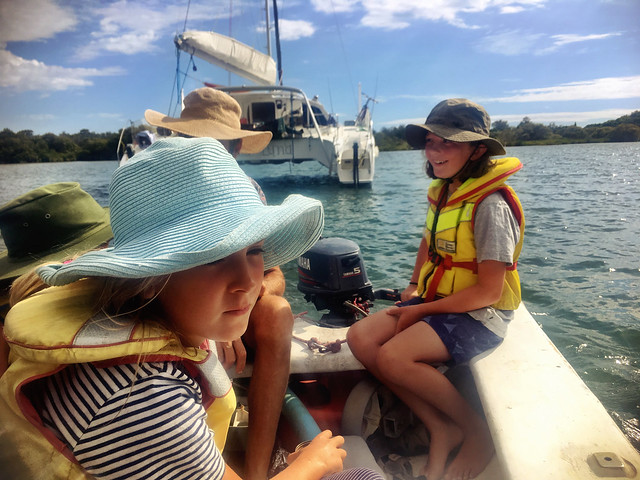 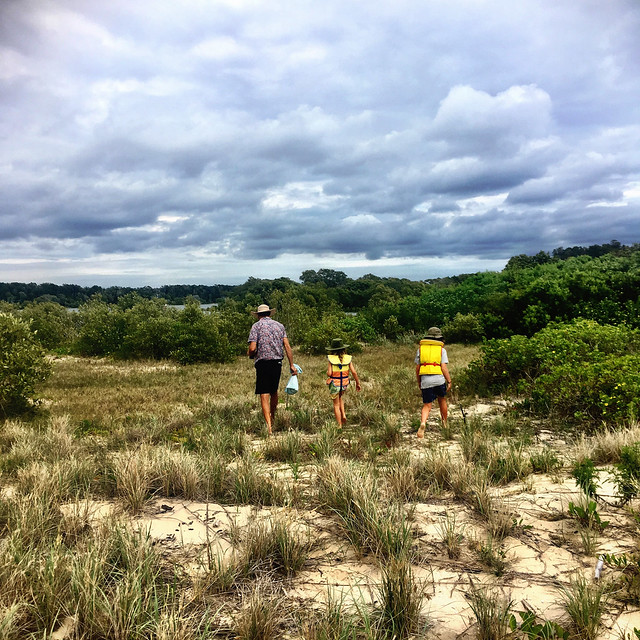 Marco identified a good spot – and Snake seemed happy enough and immediately climbed up into a small bushy tree. 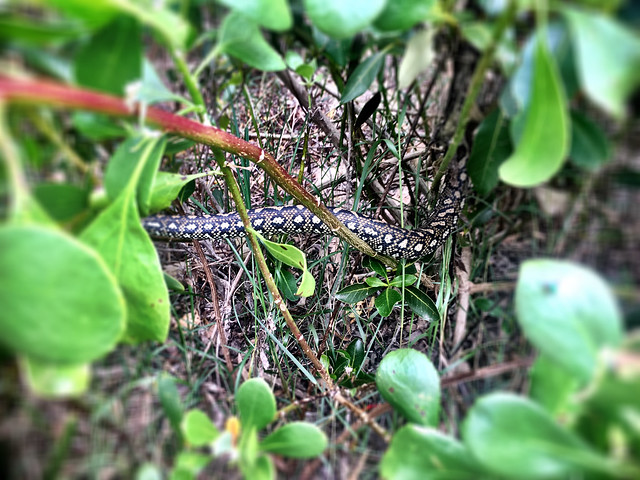 Yamba! Yamba is delightful 🙂 I took the Smalls through town (via the op-shop) and down to the beach. Last time we were here the water was fah-reezing – on this occasion, it was far more bearable. We swam in the ocean pool! 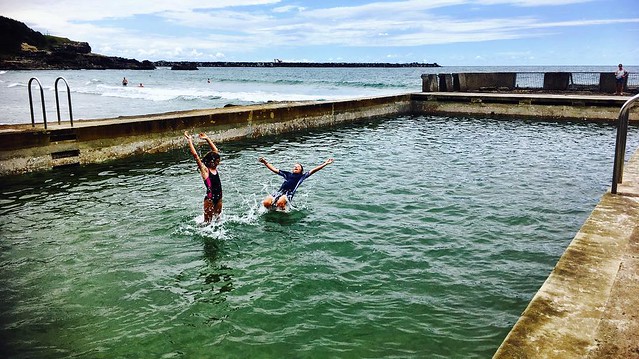 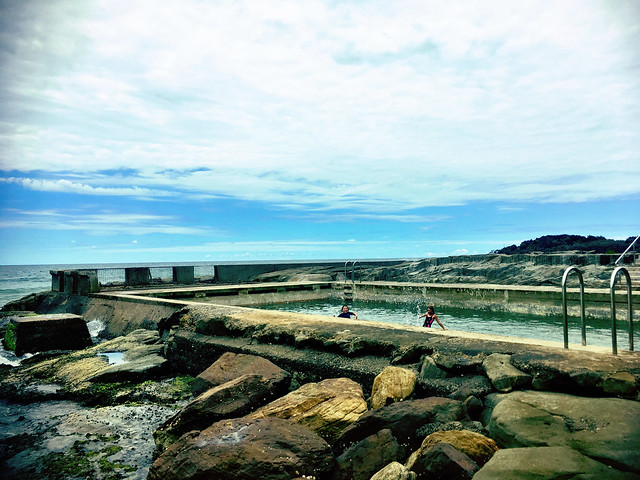 Back to Bella Luna for lunch and then M clocked on for his kid-shift and took the three of them surfing. 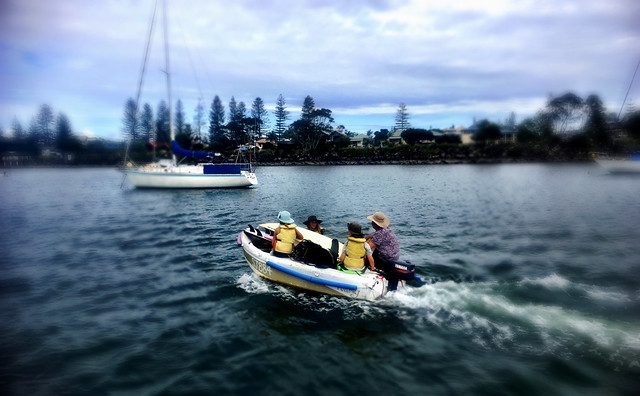 Later that afternoon we saw three kangaroos that had hopped out on to a nearby sandbank… I was wondering whether it was because they had smelled what I had cooking… roo bolognese.

Ian, father of Marco, turned up weary of soul, just in time for dinner on the outside table. Gosh, we had a lovely night. A couple of beers and then collapsed into bed. We spent the following day exploring Iluka – which boasts a truly fabulous op-shop ($2 Esky cooler bag and $3 woollen blanket) and a fishing co-op that sells cheap F&C and fantastic prawns.

Upon discovering that because of major bridge-works it’s currently opening on weekends, I called up and asked if we were able to go through later in the day! I was told, “After 18:00.” After lunch we sailed all the way down to Harwood with the jib!! It was quite blissful… 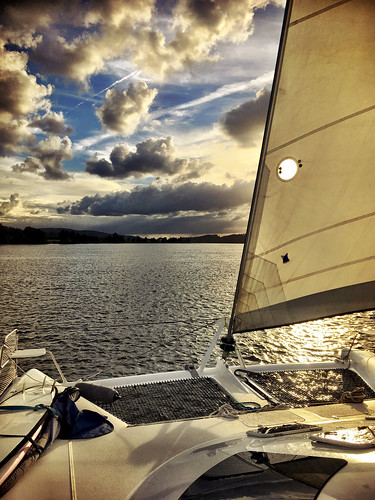 We had an hour to spare and sat at anchor waiting for 6pm near the sugar mill. 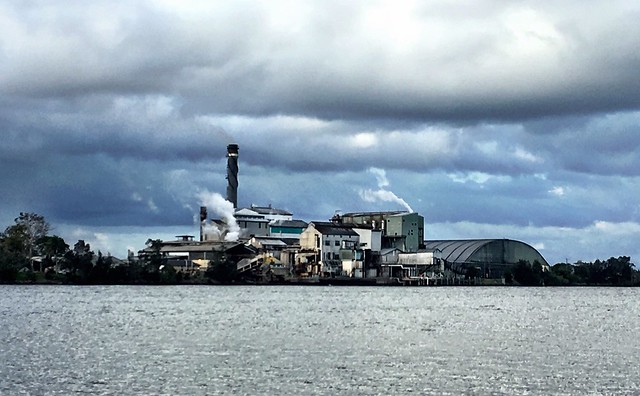 At about 12 minutes past six I texted the bridge-opener. “We’re anchored and ready. Will we get any warning when you’re about to lift it?”

I got a text straight back. Two words. “Lifting now.”

Never has an anchor been hauled in faster. The bridge (which had been a mystery to me because I could not figure out how it was going to open) began to rise up – the middle section of it – and we held all the vehicles on the Pacific Highway at our mercy – MWAH HA HA HA HA!!

It was super excito! I was all full of thrilled adrenaline and texted the bridge-opener to thank him. This is only the second opening-bridge we have encountered (the first being in the Denison Canal).

It didn’t take long from there to get to Maclean – and it looks gorgeous from the river!! 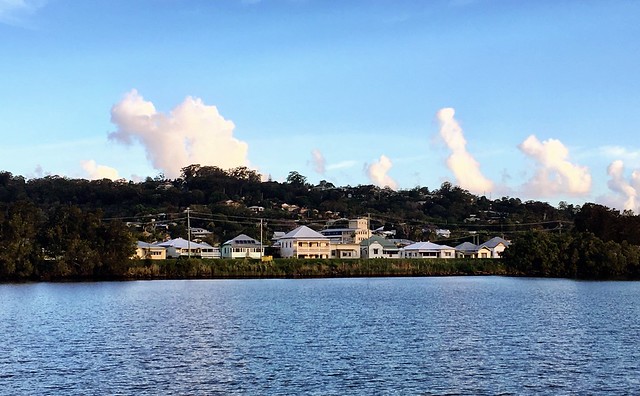 There are two new pontoons there – one was free and we tied up there with some help from Des, a local who used to work on a fishing trawler. It was a bit disappointing that the power and water were not available (they were there only in a decorative capacity) – but in between rainstorms the next day we moved to the other (now vacant) pontoon and were able to fill the water tanks.

Then the Smalls and I walked off into the sunset to find the house we are lucky enough to be able to use. But that’s a whole other post…