Poor Small Z has been struggling with the fact that Z-Mow is really gone. We hoped so much she would somehow magically reappear; rescued from a lost and found or discovered hiding out in an op-shop.

I had (in retrospect) suggested I could make her another cat far too early in the piece. She had never really morning for anything/anyone before… for weeks she would say, appropos of nothing,
“Do Nana and T have Z-Mow?” and
“We need to do a really thorough search of the boat.”

It has taken her brain almost two months to bend around the fact that Z-Mow was really not going to return. There were tears at night when she was overtired, and pleas to take her back to Bundaberg to search in person, put up posters, shake down suspects…

I bided my time until two days ago when she was upset. I broached the subject again.

“Yes. I did. And guess what – I bet I can born another – not Z-Mow obviously, because she can’t be born twice, but I could probably born…her sister?”

I was tentative. The first time I had suggested such a thing, it had triggered a large explosion.

“Not a sister.” Her little caramel eyes were still wet. “Maybe a… cousin?”

“A cousin? I could definitely do that.”

“It might make me feel a little bit happier,” she said, “but I will always have a sad place in me. Z-Mow was my best. I had her since I was one. She wasn’t even furry anymore, I loved all her fur off. Why!? Why hasn’t anyone found her?!”

I knew that thoughts of Z-Mow either lost in a ditch, or thrown into the back of a toybox by some kid ignorant of her magic, were awful for her.

“Listen. Do you want to know what I think happened?”

A sniffle. A nod.

“I think you put Z-Mow down somewhere – in a park, or on a fence as you were climbing, or balancing, or running. An older lady – a grandma – probably picked her up so she didn’t get wet in the rain. And lots of the time, grandma’s don’t really use Facebook – so she wouldn’t have seen Z-Mow’s picture on the Bundaberg Lost & Found page. But she would easily be able to see how much Z-Mow was loved. Your love protects Z-Mow wherever she is – you don’t have to worry.”

Yesterday afternoon, as the rain bucketed on the boat for hours and hours, I began to create Z-Mow’s cousin. Part of the $5 pure wool, cream king size blanket that I bought at a garage sale when I was pregnant with Small Z in 2007 is now a mattress protecto on Small DB’s bunk. It’s what I used to make Z-Mow.

I trimmed the end off, cut out a cat shape, selected some buttons for eye, and my hands somehow remembered the decorative stitching taught to me by Mrs H many moons ago.

Z-Mow’s cousin appeared as if she had been waiting to do so. 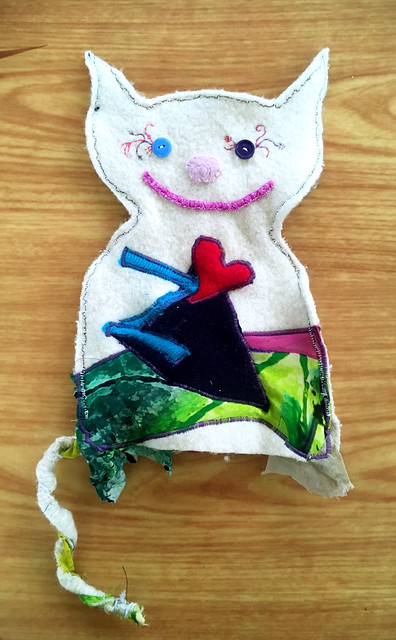 Last time I had used some fuzzy pink fabric for the nose that was from a onesie Z’s great grandmother had bought her. This time I found a scrap from the pink alpaca troucsers that tiny Z wore until M put them through the dryer and made them a mini felted version of their former selves.

I had the same kind of hot pink microfibre cleaning cloth hanging about that I’d previously used for a mouth. I included scraps left over from dresses I’ve concocted.

What took me a-g-e-s when I had a 12 month old baby, came together over the space of a wet afternoon. She is loved. 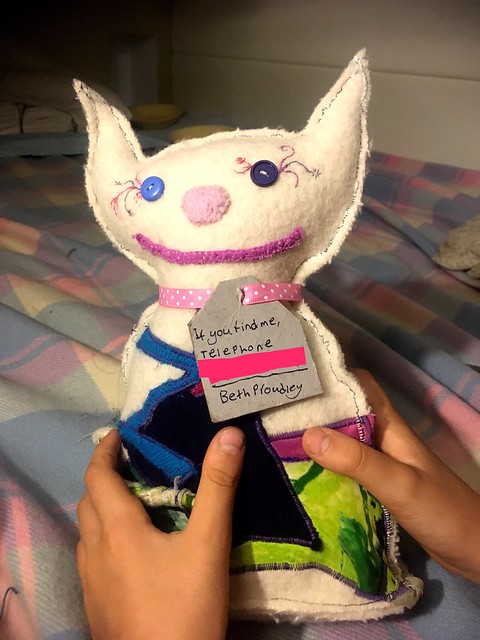