It is a delectable feeling to be back in a place you know and love. None of the trepidation that comes with a new anchorage, a comfortable knowledge of what to expect once you go ashore. After the previous few days, it was a very soothing prospect.

Our first morning we motored Foamy into the lagoon – and did a little exploring into the mangroves as the tide continued to flood in. 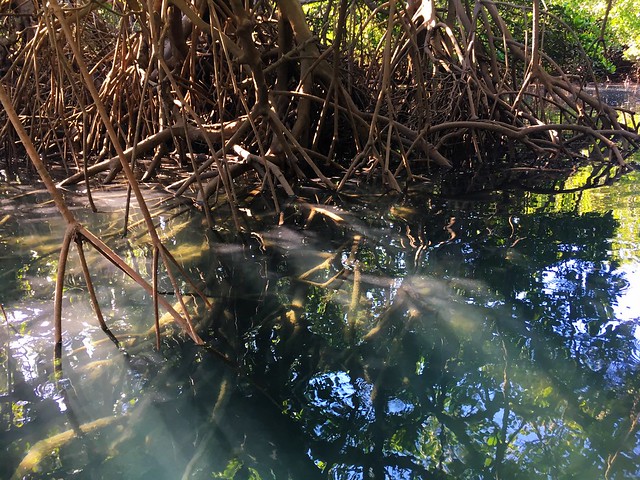 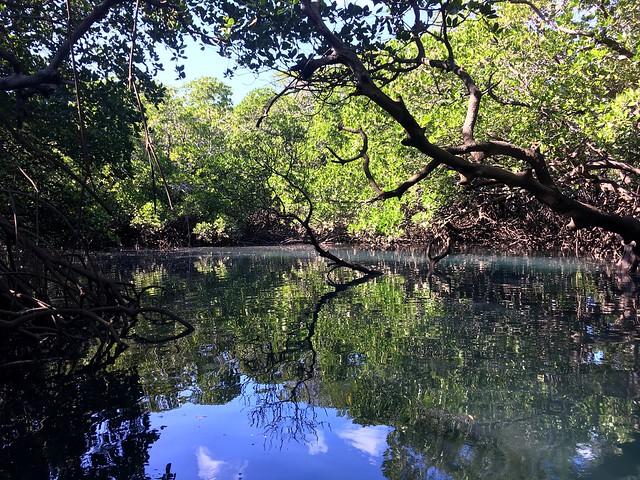 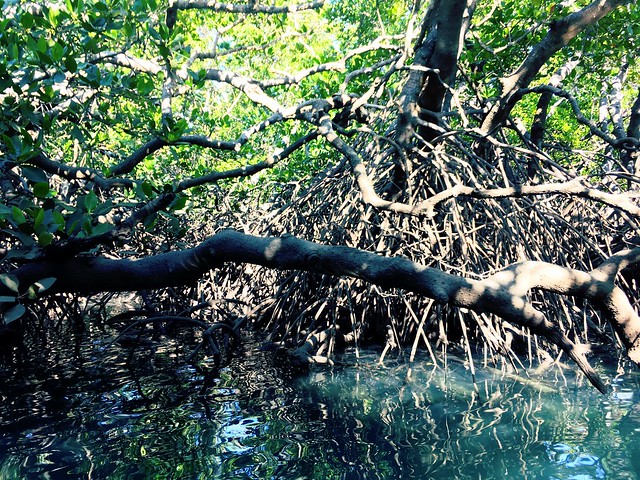 We tied up near the dock – no one was around, and the goat-boat had still not reached the level of the dock that would ensure easy goat transfer between shore and vessel. We started walking up the hill and Steve, the other island resident, appeared on his quadbike, Diamond (a border collie and dingo cross) and Bronte (old chocolate labrador) on there with him.

He turned off the motor and we scrambled down to the dock to meet him. He took off his backpack as we gathered around him. Inside was a titchy little baby goat. I died. I got to take it out of the bag and give it a little bottle of milk, with some help from the Smalls. 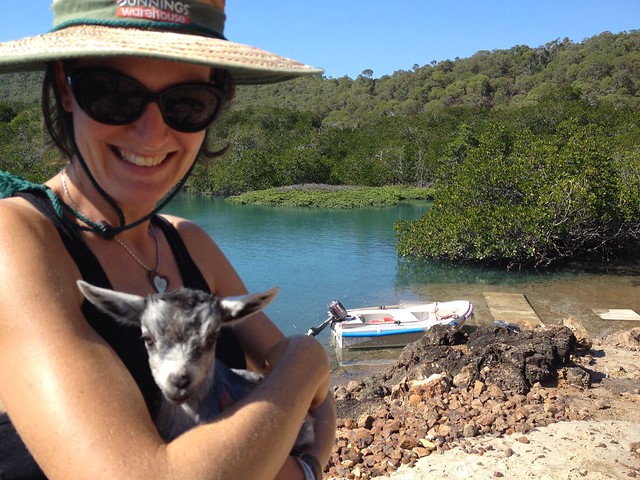 It was a divine little creature… 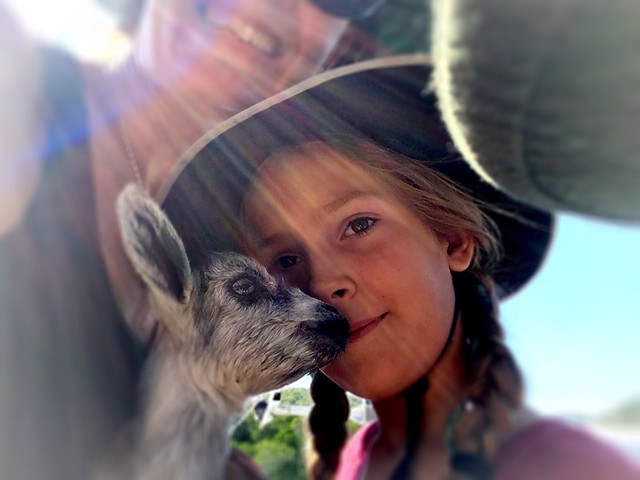 It was my job to hold the baby goatlet while M helped the others load cages holding mothers and babies from the ute that had just arrived, on to the deck of the boat.

I was slightly disappointed, as I had spent the night imagining that all the goats would trip-trap-trop on to the boat one by one and stand around the bow, looking out to sea, musing on their journey to a new non-island life. 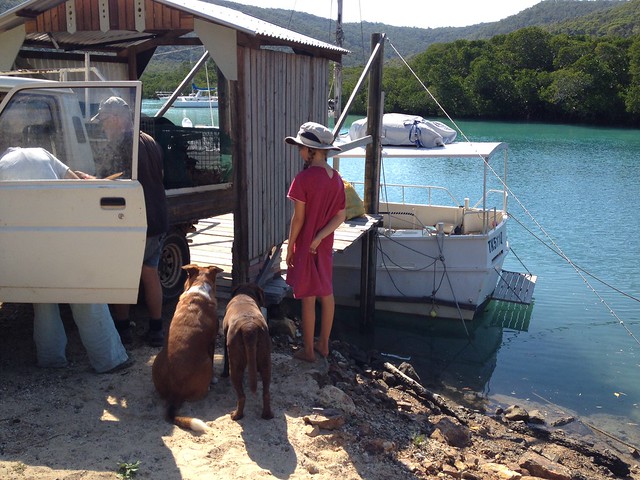 Anyway, secured in their cages was probably the less dicey option for all concerned – but less of a storybook ideal. My baby goat was the last one on, and she was given a comforting banana.

The tide hit the right height and John motored the boat goat out of the lagoon, as we waved goodbye. Goodbye goats… 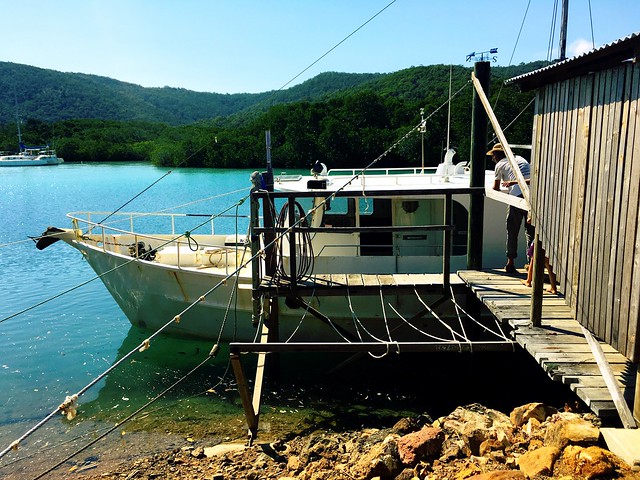 Down at the beach we had a natter at the A-Frame and then I went for a swim with the Smalls, leaving M to chat with Katy and Rob. This was Small DB’s first swim since she sliced her legX on an oyster shell over a fortnight ago – it has been healing beautifully, so we figured a dip at this stage wouldn’t be a drama.

She was SO HAPPY to be back in the water! Hooray Small DB!!

We snacked on coconuts we found on the ground, returned to Bella Luna to get a few things sorted, and made our way back to the A-Frame for a fire. In the meantime, our friends Rosie and Doug from Eagles Wings had turned up, as had another catamaran. So the crews of four sailing boats, plus Donny and Rhythym, all sat down together after we had cooked our dinners on the fire.

We had the end of Sashimi II with sweet potato in foil topped with sour cream, cheese and butter on the side. M and I busted out our last bottle of cheap red in honour of the occasion – we all stayed until Small DB passed out on M’s lap at around 8.30pm.

The next two days were spent in much the same manner, although we moved Bella Luna into the lagoon for a night because the conditions in West Bay were something we wanted to avoid. Too much roll. 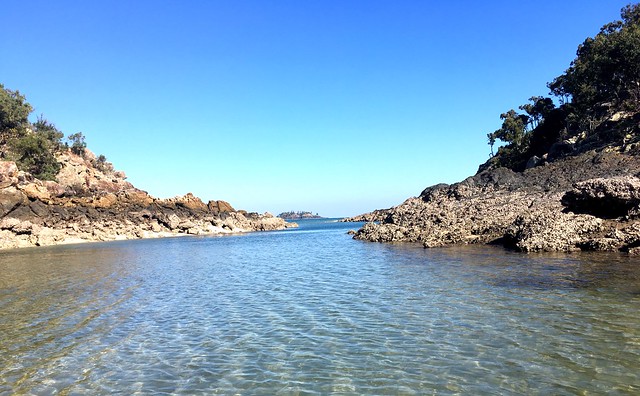 Oh gosh – that lagoon… The wind was blowing, nullifying the sandflies and we watched the tide ripple out from under us and felt Bella Luna settle on the sand.

We were left again on a sand plateau, high and dry – there was still water like a moat around us a little way out, and that creates my favoured scenario… wandering off the boat on to the sand and swimming off the edge of the sandbank (keeping out a wary eye for stingrays). 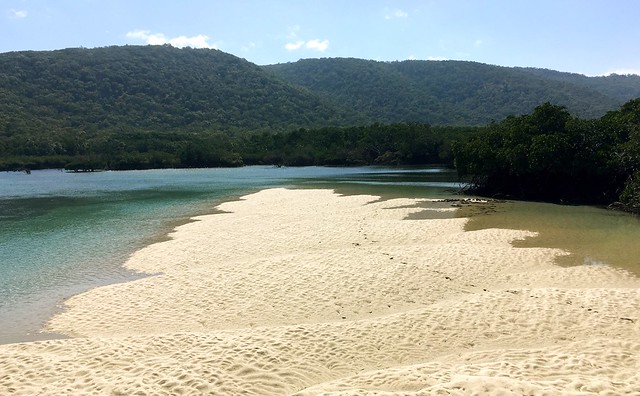 The Smalls came wandering with me at the lowest point of the tide – we were all marvelling that we were walking on the bottom of the lagoon, that had just been about three metres deep. We got near to where a whole lot of rocks were covered with oysters — Small Z, who had accidentally left her shoes in the park at Airlie Beach, whined briefly about the $30 beach shoes we had bought her from a dive shop – they’d lasted two weeks before the first hole had appeared.

Shoes. Let me just run with this for a bit:

“Mum,” said Small Z, looking at me with pleading chocolate caramels, “Please can I get some new Keens when we get back to Hervey Bay? These shoes…they’re the worst $30 we ever spent!”

“Well, you just have to think that we’ve paid about $10 a week to protect your feet, so it’s not too bad. You wouldn’t have been able to do all the exploring you have without them.”

“Probably, but I usually get them on Amazon – they’re half price when I do it that way, but if we have to get them in Hervey Bay, they’ll be expensive.”

“I know. It was an accident. But if you lose the next ones we get, you’ll be paying for half the pair after that. That might teach you to be a bit more vigilant.”

A bit later M and I dropped the Smalls at the A-Frame, where they hung out with Doug and Rosie, while we tramped up the nearby cliff on the daily quest for phone reception.

I really do need an antenna specialist to explain to me how and why when standing in one spot and getting enough mobile signal to receive a text message, I can remain like a statue and try to send one back, or try and check the weather…but the signal has disolved; thus I am doomed to wander the clifftop like Cathy on the moor, arm to the sky, seeking where it might have moved to.

Often I find it again, for about one minute and 47 seconds – just the time it takes for the Bureau of Meteorology site to load ‘MetEye‘ – then it chokes as it tries to load the forecast for your actual location and you throw the phone over the cliff and into the crashing waves below. Or something like that.

M managed to pull in some kind of three day forecast, and over the following hour swung like a pendulum. “We should leave tomorrow morning… No. We should stay until Wednesday…”

As ever, I could have remained on Percy Island almost indefinitely, so I wasn’t much help. As we came down the cliff I had a creeping realisation, a kind of karmic massage… Just after I had spoken to Small Z about shoes in the lagoon, I had got back into the boat. I did not recall bringing my shoes off the sandbank. F!@$. Another pair gone… and my Small Z-lecture rendered instantly irrelevant. *Jesus*.

There were a pair of Sperry boat shoes that had been left behind/abandone in the A-Frame, and I was forced to adopt them. And now I’ll be hunted down and killed by the fashion police, and their wrath will be just.

We chatted a little to our A-Frame friends and then M seemed to come to some kind of internal resolution.

“Right – let’s go. We’ll leave tomorrow. So we have to get Bella Luna out of the lagoon NOW because it’s high tide – otherwise we’ll be stuck in there and won’t be able to leave.”

What sorrow that would have been.

Anyway, we zoomed around to the lagoon in Foamy, again leaving the Smalls behind (a novel new habit we are growing to love), hoisted the dinghy into place, put the rudders down, warmed up the motors, untied the back bridle from the mangroves and pulled up the anchor – all with the tide snapping at our heels.

A good exit. We spent the rest of the afternoon doing little, hanging with Rosie and Doug – we sailed away the following morning, ostensibly to Island Head Creek.