All the people on this boat who are not M agree that the sail from Brampton Island was hideous. It was as if the universe had decided to give us a shake – get that lazy Whitsunday perfection out of our systems.

The sea was muddled and messy, the wind felt considerable and the sky was overcast. M, of course, was loving ‘proper sailing’ – while I had one of those mornings where getting out of bed just felt too damn hard.

I was up early to pull up the anchor and make us all a breakfast smoothie, but then returned to bed with Small Z. I lay prone for an hour or so, and then we started watching an episode of Seinfeld.

Halfway through, a waterfall of water cascaded elegantly from the ceiling – through the half-opened hatch at the end of the bed.

“AAAAAAAAH!” we shrieked. I began some robust swearing about why and how we NEVER get this CLOSE ALL THE HATCHES thing right until we get taught a lesson that keeps us alert to such things, until… until we slack off a bit.

Only one of the two catches had been locked down properly. It was surprising it hadn’t happened sooner as we had been getting waves over the front of the boat all morning.

We continued to lurch along as I whacked a towel down on the floor – instantly soaked. Instead I used a chamois and a saucepan to get most of the water gone – thankfully I had not had much crap on the floor. The end of the bed got a bit of a splash, as did my handbag and the bag of wool – otherwise we were OK.

Two hours later there was a scream from Small Z, who had ventured into her bedroom in the other hull for the first time that morning. The same thing had happened, but worse. Much worse.

One of the catches on a side hatch had not been secured and water had seemingly poured in, although to look at it, you would have thought the hatch was actually closed. The water went on to her shelf containing all her treasures and then overflowed on to the floor…where all her books had fallen…

AAAAAAAAHHHHHHH. The stuff on her shelf had intermingled with the clay bowl she had made on Middle Percy Island, which disintergrated in the water and formed a muddy sludge. Thankfully M dealt with all this, as I am not at my best with wet books and the boat continued to slap her way through the seas.

Thankfully the wind was not going to allow us to get to Middle Percy Island that day. I say thankfully because I had thought it was too far to go, and the alternative – Curlew Island – I had heard good things about.

In addition to sorting out the mudslide in Small Z’s cabin, M had also had to go up to the front starboard hull, where the storage locker (spare water containers, the yabby net, the shopping trolley etc) had filled with water and was altering the weight of the boat. Not good.

This had occurred because we had put a bag of rubbish in the locker, the bag had split and rubbish had blocked the locker drainhole. Poor M had to bail out all the water and rubbish as waves sluiced over the top of him and the boat smooshed up and down – the only saving grace being that we weren’t in the southern ocean and so the water was 25 degrees.

After all this we were all slightly strung out – it was like we’d been fast-tracked back to our first few months of cruising when it felt like this kind of thing happened at least every few days.

It was with extreme relief that got inside the sandbank at Curlew Island and finally anchored at around 3.30pm. Within about five minutes we had lowered Foamy into the water and were heading ashore – all in need of some off-the-boat time, having been jangled around on the waves since the early morning. 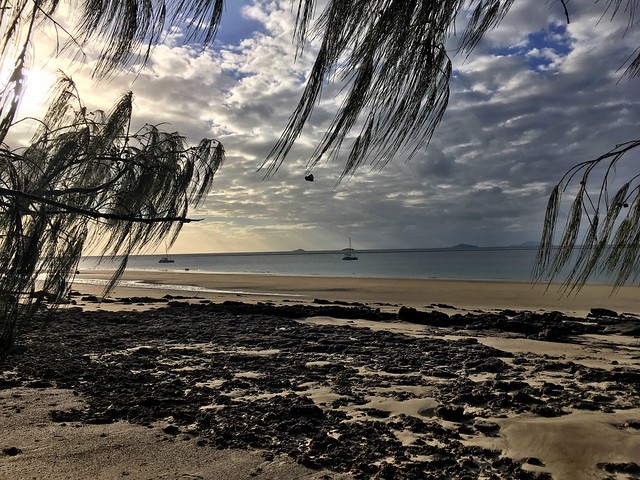 There was a cliffy-mountainy looking thing, so naturally M went off to scale it. The Smalls and I explored the beach and made rock stacks… 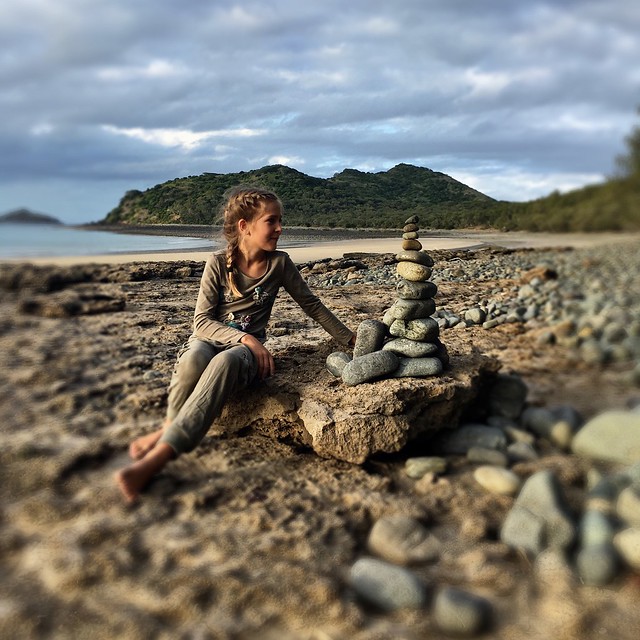 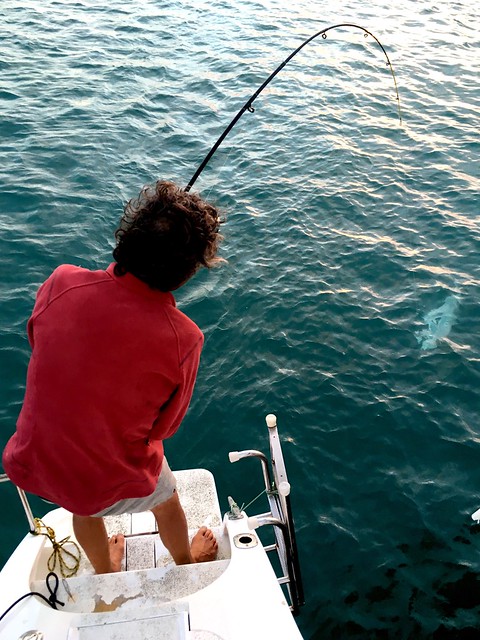 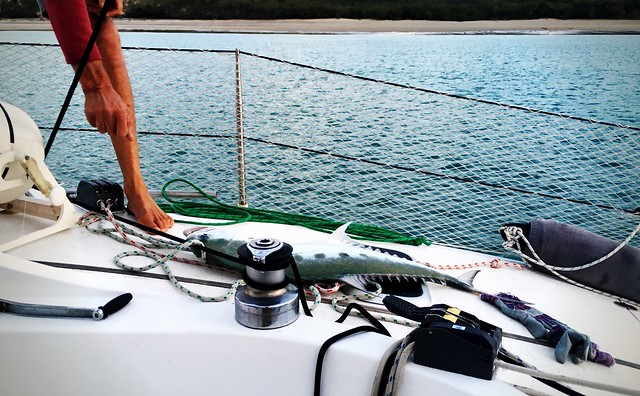 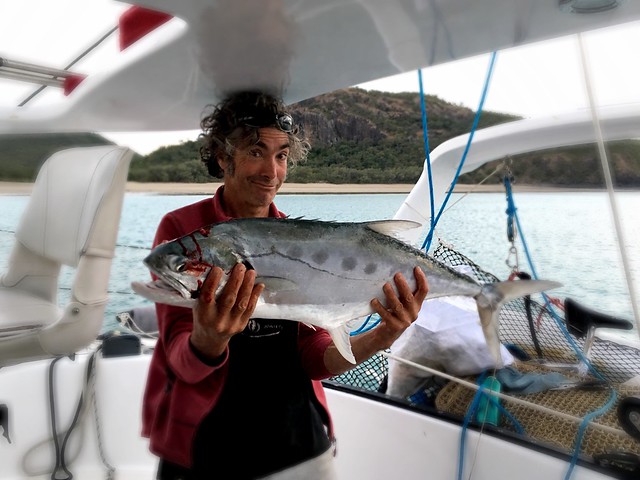 I named him, Sashimi II. He was, and continues to be, delicious. It felt like a reward for getting through the day.