We left Goldsmith Island, aiming for Scawfell Island, but the wind dropped out and we diverted to Brampton Island instead. We needed somewhere to hide from a large south easterly wind for a few days – I was glad that the wind had decided the destination for us, because M and I could not.

I gave the crew members a short report on the history of Brampton Island before we went ashore. This included the following facts:

– it was originally a coconut plantation, grown from seeds imported from Indonesia, and most of the coconut trees in the Whitsundays resulted from Brampton Island…

– around the time of WWI the Busuttin family lived on the island and had a go at breeding CHINCHILLA RABBITS. They really did. It didn’t work out, and M and I are at a loss to understand why the island is not besieged by clouds of jumping puffballs, but it isn’t.

– when the rabbit scenario did not take off, they had a go at breeding cavalry horses, which they sold to the Indian Army…

– strangely, the demand for cavalry horses began to dwindle, and in 1933 they began a little resort…

From our lofty pedestal of having wandered around the island, they should have kept the bloody resort just like that. Little. The Busuttin family sold out in 1959. From about 1962 development increased and the resort grew – they laid down tram tracks to convey people from the jetty to the resort… 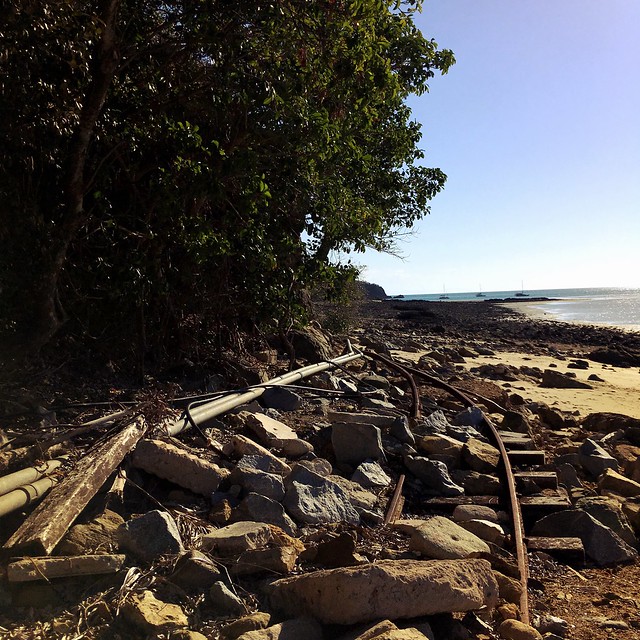 They put in an airstrip. And from what we can see today, there are at least 50 or 60 little units – all abandoned except for one. The money they must have spent on the resort is quite boggling once you walk around it.

There is what must have been a gorgeous saltwater pool set out on the shoreline, which is now sludge-filled and decrepit. 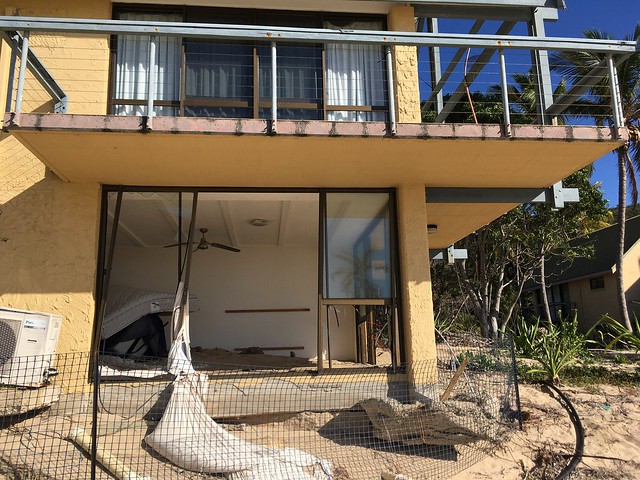 Beyond the “Keep Out” signs there are all the things a resort might require – trolleys, bins, forklifts, old catamarans, jetskis – the units have been built close enough to the beach that a couple have had their windows smashed and the floors are now full of sand.

The first morning we explored, I was awed at how such infrastructure could just been left to rot. It’s as if an illness swept through and everyone got out.

The second day I was less awed and more annoyed. The wind had blown hard through the night and rectangles of glass were now exposed, sticking out of the sand on different parts of the beach.

We walked through the bush on tracks that had obviously once been coiffed and well cared for – with much of side adjoining the hill lined with handmade stone walls. Every few hundred metres clouds of butterflies surrounded us – impossible to capture on video, although I tried repeatedly.

In some parts we had to climb under trees that had fallen or grown over the track. The Smalls, not wearing long trousers, had their legs scratched by grasses and brambles. Spiderwebs were many, though the butterflies did not seem to succumb to them. 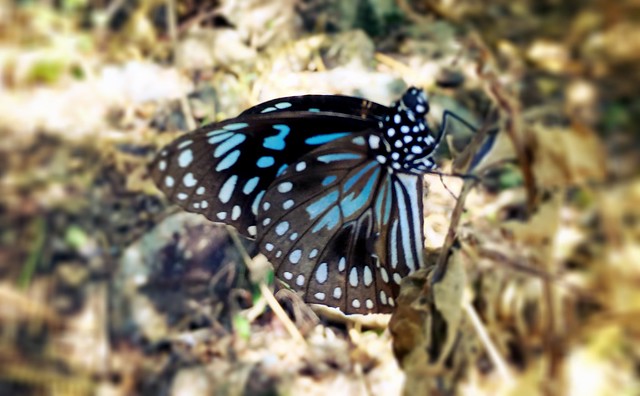 Back in the bush, away from the beach, it was easier to imagine a more magical island with butterfly clouds, sculpted pathways leading to different bays or to the top of the island itself. We found stone steps, old information signs… 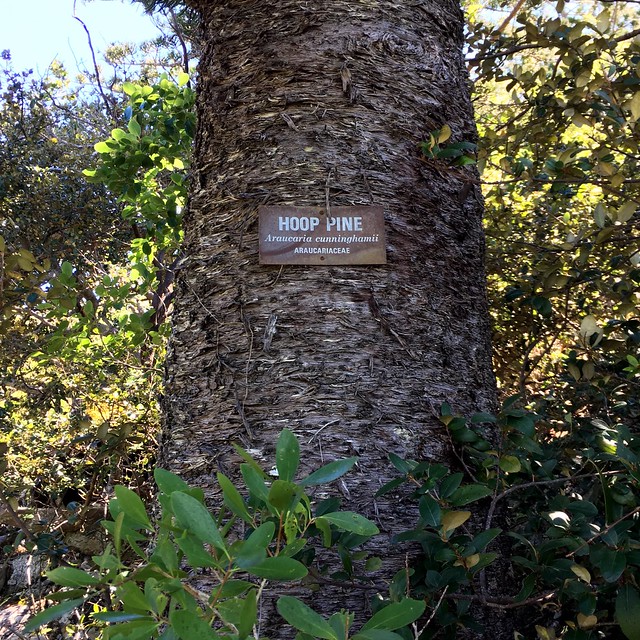 Scrambling down on to the beach after being surrounded by the bush made me think of our walk from Spain Bay. Again, the WildMob had got there before us – thank goodness – the bag they left was half full, so we were able to add a lot more plastic detritus to it that we would not have been able to carry back.

The walk had been quite long, and none of us were very keen to return the same way. We explored Turtle Bay, and then roamed around the point to Saddle Bay?? and back again. Down the resort end of Turtle Bay the Smalls and I looked over the seaglass we had collected, while M scaled the bank of sand above us, and came back down grinning.

“If we just walk up here, there’s the runway – we can follow it down to the resort and we’re back!”

Huzzah! I wanted to get away from that end of the beach – the amount of rubbish was depressing, a large amount of it obviously from the resort, looking as if it had been tipped over the side leading to the airstrip.

We began walking, and I reassured worried Smalls, who had seen a sign saying that the runway was on a private lease and there was no access.

“Don’t worry. If anyone stops us, I will tell them that we walked the long way here and that you guys were too tired to walk all the way back. It’s fine – this airstrip probably hardly ever gets used.”

We must have walked halfway down the runway – the sun was hot, and felt hotter still while we were on the asphalt. By that time the beach that led around to the front of the resort was adjacent and we went down to walk along the sand.

My phone peeped as we neared the resort and I found I had some reception. I called the Mothership, who had returned to Australian soil the previous day. We’d been chatting for about seven minutes when a large shadow passed slowly over head. I looked up as a light plane skimmed down from the skies and made a perfect landing on the runway. Where we had just been walking. ? 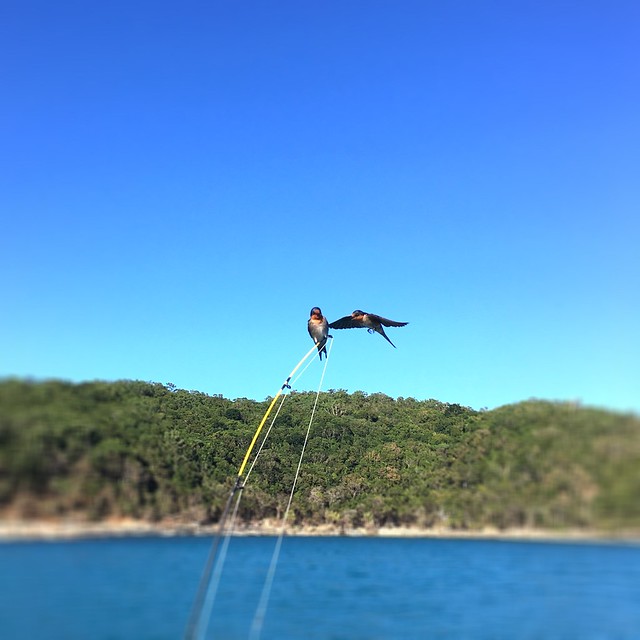 A picture for our friends – Jess and Chris… 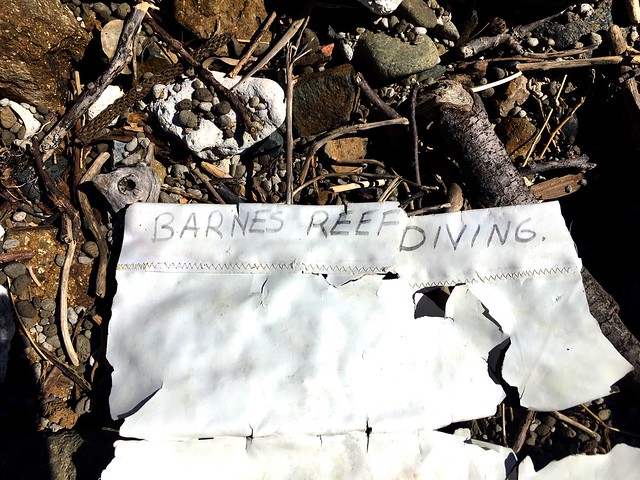 Our last day on Brampton Island (we were waiting for the weather to sort itself out) M went and climbed the hill to the top of the island, while the Smalls and I investigated another stretch of beach that we hadn’t yet seen.

We wandered down, following the old and twisted tram-tracks to where, we guessed, the old pier must have been. We found many cowrie shells – my beach treasure of the day was an unused roll of sticky tape – perfectly usable!

Once the tide retreated we walked over to Pelican Rock to see what we could see. It’s only accessible at low tide – as is Carlisle Island – and it was rocky, scrubby and lonely. There were birds there that wanted us GONE so we didn’t linger long… 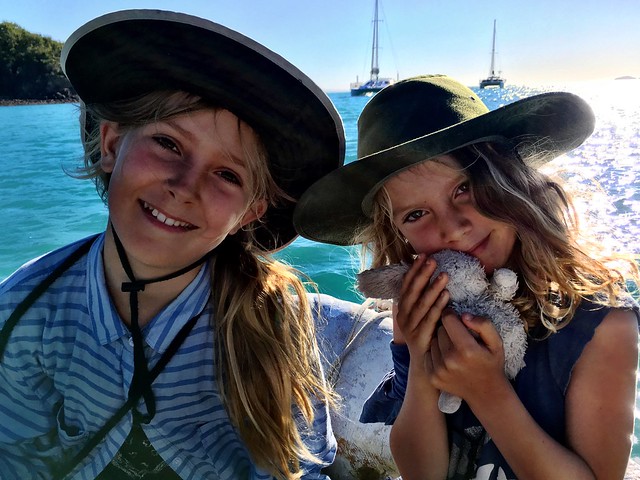