Should I ever need to disappear myself from society in general, I could do worse than live on a boat attached to a pile mooring in Bowen. It would set me back $64 a week and I would just have to cope with the occasional cyclone. (All this rests upon the supposition that I would be able to tolerate the heat of summer, which I wouldn’t, which is why this is all purely hypothetical.) 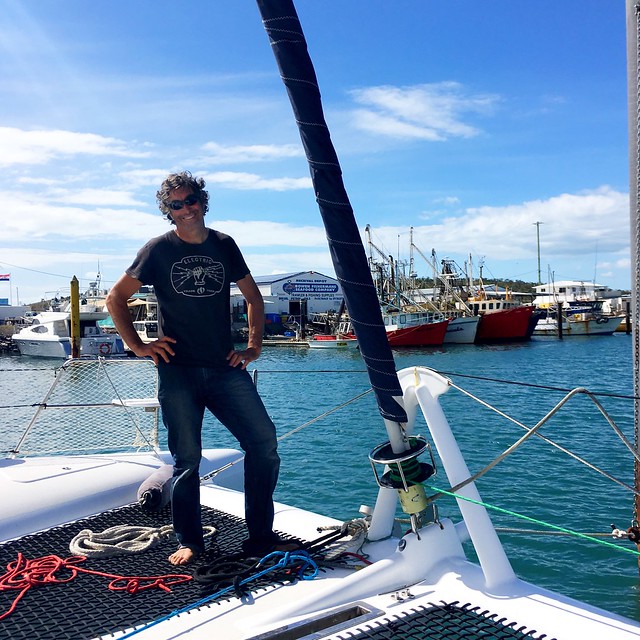 We had never tied up to a pile mooring before – imagine a wooden telephone pole (remember them?) sticking out of the water, about 50 feet away from the next one – we had to slot Bella Luna in between them and tie the front and back of the boat to each one. Such was our trepidation (I had read the night before about a guy trying to do the same thing in the same harbour and needing someone in an inflatable dinghy to nudge him into position) that, when it came to it, we were very careful and it was quite straightforward (probably because there was very little wind). 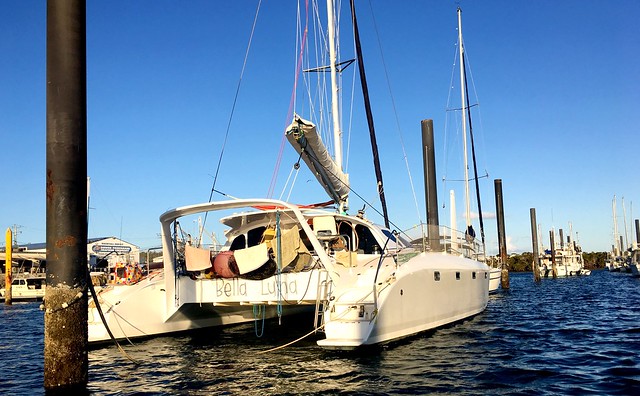 I’d had quite a bit of anticipation about Bowen. In my head, Bowen was to Airlie Beach what Maryborough is to Hervey Bay. Less bling, more Queenslander houses, less tourists… The harbour where we were moored felt like a working harbour – the prawn boats, with their big mechanical arms folded up, came and went.

There were many boats that had come off badly in Cyclone Debbie – one was the same model as ours and had a huge chunk ripped out of the side. Apparently the waiting list to get boats pulled out of the water and repaired is longer than a year, so there were a lot of temporary-looking patch up jobs.

The North Queensland Cruising Yacht club was something that we walked past daily – it was friendly, not intimidating and had a lovely little garden. However, the cheapest over-the-counter bottle of red was $28 so we didn’t actually buy anything from there.

After walking along the wasteland area to the esplanade along the beachfront we spied a pretty awesome skateramp, but this paled into insignificance as we walked a bit further along and found A FREE WATER PARK!!! That was it – each day we were in Bowen, the Smalls had an hour or so there – SO. MUCH. FUN! And because all the other kids were at school, they often had it to themselves. 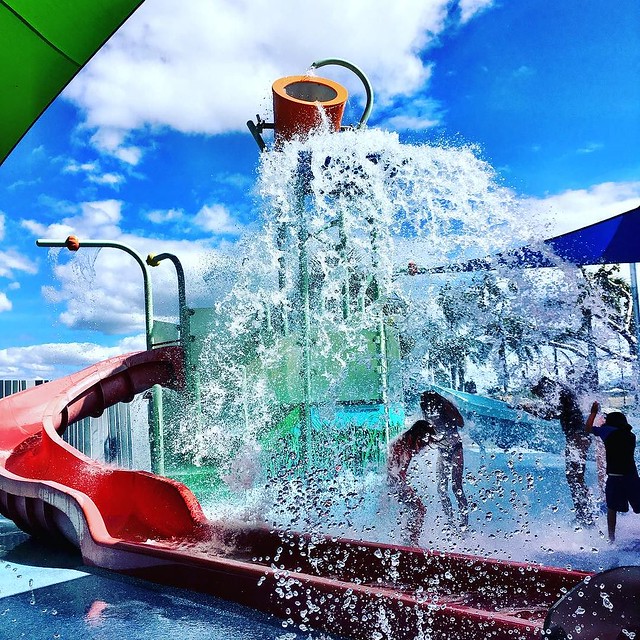 Bowen itself puzzled us – the streets there are so wide – take your normal suburban street width and double it – and it just didn’t make a lot of sense. Until we found out that a long time ago, Bowen was all jiggy to be the capital of Queensland. It was the pre-Brisbane! 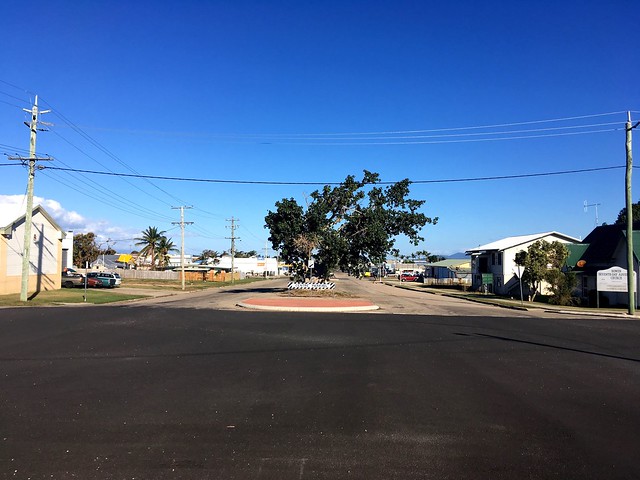 However, someone like me probably pointed out that it was too darn hot in the summertime and they schlepped the idea down toward the NSW border where it’s at least a few degrees cooler. 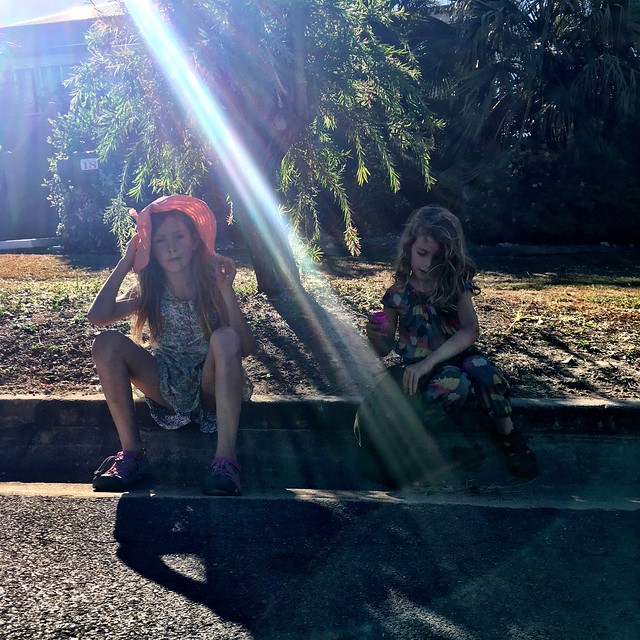 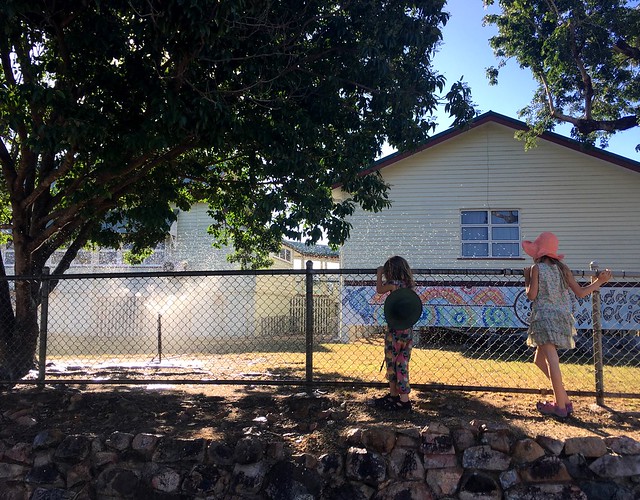 Now Bowen gets to focus on growing mangoes and tomatoes instead of malls and ‘burbs. We cruised the (very wide) main street and the four op-shops. Small DB got a very cute playsuit, a $5 stinger suit and Small Z got a new dress. I bought a voluminous full length silk skirt for a dollar with the intention of upcycling it into baggy Small pants.

I had envisioned us frollicking through shaded wide streets ooohing and ahhhhing at old beautiful Queensland homes, luxuriating in the warm, and only mildly humid, tropical air. Bowen, however, was quite untropical. It was about 27 degrees everyday, with a dry heat – lawns were parched – and many of the houses were sad and kind of dilapidated. There weren’t a lot of people getting around. I suspect a high unemployment rate/economic sadness – we had our bags searched each time we went to the supermarket to get icy-poles. 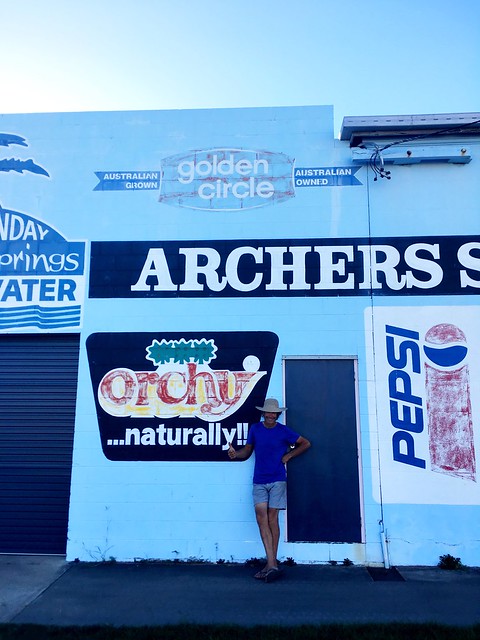 Although it was not how I imagined it, Bowen was a lovely place to stop, and seems to be quite a hub for cruisers on their way up the coast. Cheap prawns were a highlight! But the best thing about Bowen was an area M discovered while out on a Solo Manly Bike Ride… 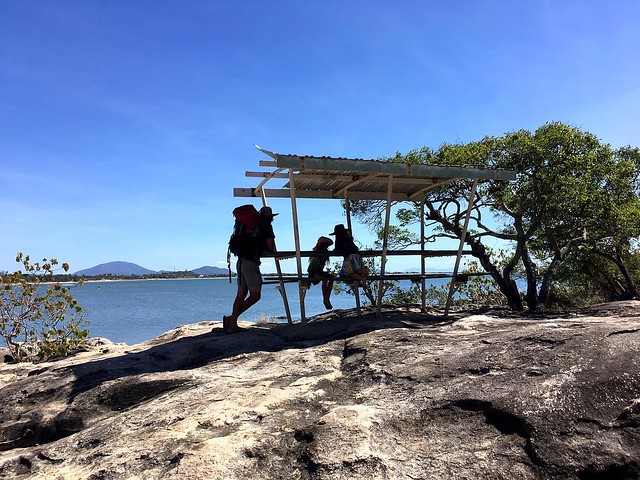 We left our mooring after five nights, and sailed around to M’s Discovery – also known as Greys Bay. We were the only boat anchored there. Walking along the track that follows the coast to Queens Bay, we saw fantastically positioned picnic tables – obviously cemented in place many years ago by a member of the local Lions Club with an eye for the picturesque. 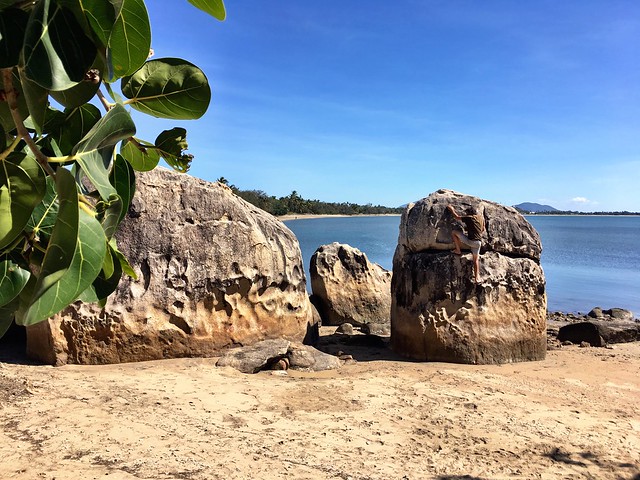 Then there was this crazy tree – I don’t know if it is some kind of fig? Whatever – it is truly investigative. One of its branches – the one Small Z is on – has arced over the footpath, joined to an enormous boulder and has started a whole new life. 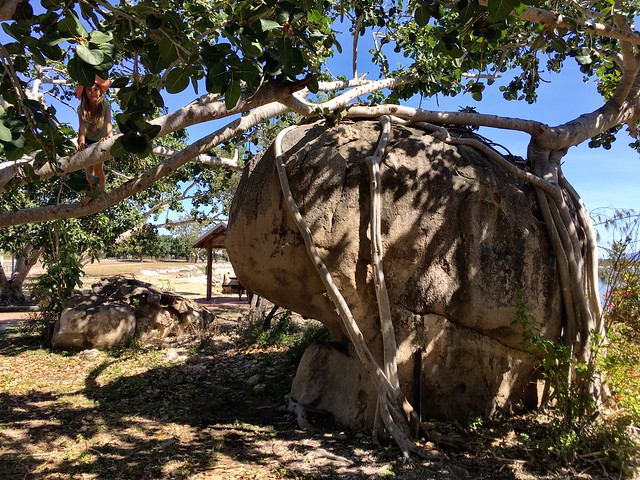 The sun was quite bitingly hot, and the Smalls were keen to swim, so we reversed our track, headed back past where Bella Luna lay at anchor and up the road to Horseshoe Bay. We didn’t end up going straight there, because I saw a fluttery spangled sign that said: “Art Show – Gold Coin Donation”.

I ignored him and entered Horseshoe Bay Resort with the Smalls bounding around us.

“…I don’t think,” continued M, “that there will be something on in here – this is like a caravan park and….”

And there, nestled just between the amenities block and the pool was a little shed that had been transformed by plastic milk bottle sculptures, fishing nets, mermaids, shells and corals. About three grey-nomad looking people were sitting at a little table, taking the gold coin donations and filling out complimentary raffle tickets. One of them was Graham Brownell, sometime resident of Sandy Bay, Tasmania. It only took M about four minutes of labradoring to find that they had a mutual acquaintance – Graham had painted many of the pictures that were for sale, including one of the Huon River.

The Smalls and I looked at all the art, each of us finding a favourite or two. This was mine… Her name is Esm, and I bought her! She now resides in the Catskills… 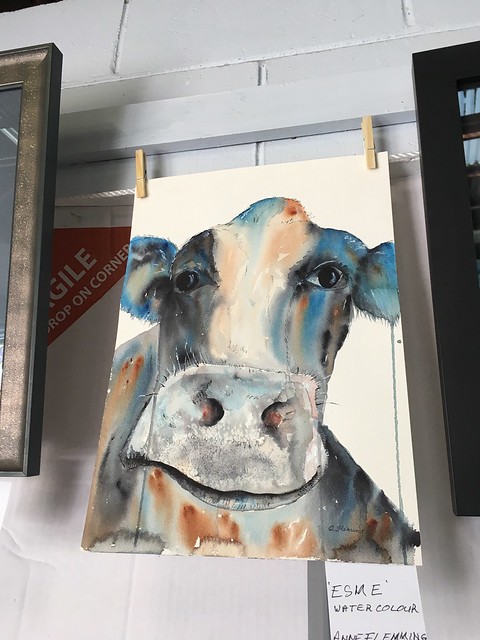 When we finally left we found ourselves promising to return the next afternoon for music, dancing and the raffle draw…. And so we, by default, appeared to be staying an extra night. And Horseshoe Bay! So beautiful! It reminded us quite a bit of the babies beach at Brunswick Heads – it was just lovely. 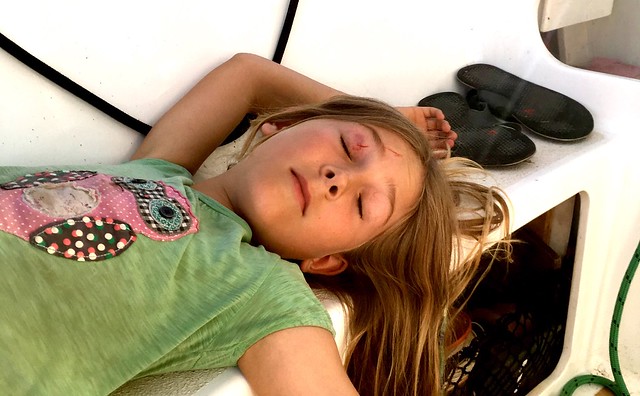 There is a fantastic cafe that overlooks the beach – I had my first iced coffee since being in Hobart. M – with both beach and cafe at hand, was in heaven. It was the first place we had found in Bowen where it was great to just hang out (apart from the water park).

The following day we did it all again, and then I returned to Bella Luna while M took the Smalls back to closing party at the art show. They had a blast….