Someone who will remain nameless forgot to get diesel in Hervey Bay. We are not like many boats – our outboard motors run on petrol. But our stove… my precioussssss Wallas Nordic DT – it runs on diesel. And thank god it’s very economical with its fuel use, because we’ve got less than a quarter tank left.

Which, by necessity, points us in the direction of civilisation. Makay? Yepoon? Sarina Beach? After extensive discussion M and I decide to sail for the following two days and nights to Mackay. We bade fond farewell to Lady Musgrave – the wind was picking up and we were one of several boats making an exit before things got too bouncy.

Before things got too bouncy… right. We flollopped along. A few things actually fell over. It was a messy kind of progress – we had to wait it out until we passed by a few more islands, and then things steadied.

A little while later we realised we had entered a whale thoroughfare – although, for some reason, they seemed to be going the opposite direction to us. We imagined they were heading to Hervey Bay.

Whales are big. Did you know? If there was any doubt about it you just need to be on a boat with a couple of them about half a kilometre away, jumping out of the water in sheer joy at being TOO BIG TO BE ALLOWED. I was very excited. M, builder of our boat, was less so. We must’ve seen about six or seven of them – plus one maverick dolphin. Maverick? I could say ‘podless’, but I will go with maverick. And here’s a whale… 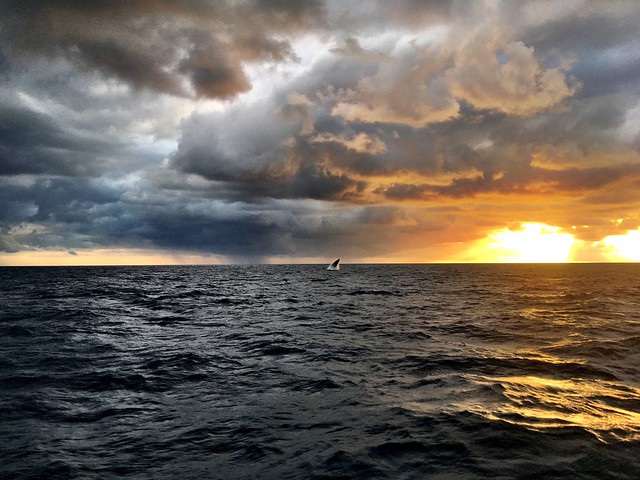 The other crazy thing was the Fish of Weirdness. Seriously. It has a suction cup on its head – I think they often stick themselves to whales, but obviously the whales, as I said, were going in the wrong direction and the Fish decided to hitch a ride with us.

M and I were at the back of the boat, looking at the handline and musing on the absence of tuna. TooooonAHHH. And I saw what I thought was a fish tail swishing in our wake – protruding out behind us from under the hull. What THE?? I had heard of little friendly cleaning fish that hang around with larger creatures of the deep – but this was not small.

We went over to the other hull to try and get a better view. Bella Luna was travelling quite fast so it was hard to get a good look at a fish that was hanging by its head off the bottom of the boat – but (it has been previously noted) I am patient, and I got one picture of it. 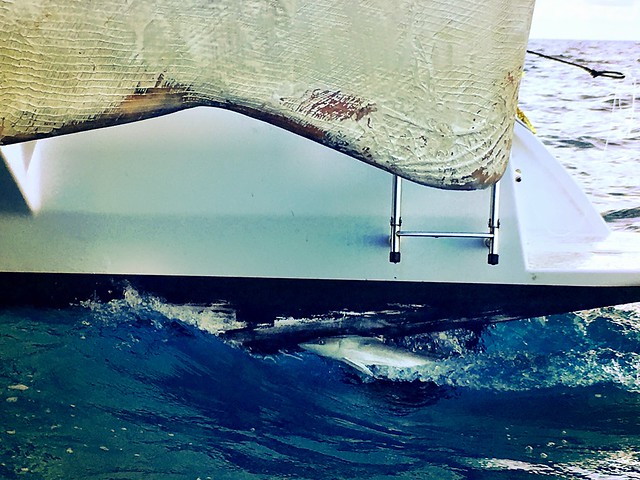 Seriously. It stayed there for hours. M tells me he knows it as a ‘ramora’.

{Tangent —> Small Z, always a night owl, has the occasional habit of catastrophising when she leaves it a little too late to go to bed. She fixates on something, inflates it out of proportion, and I always (so helpfully) tell her to reconsider it in the light of day. The same way they tell you not to rip your baby from your breast in the middle of the billionth sleepless night and start bottle feeding it formula – wait until the sun rises and see if you feel the same way. /end tangent}

Whales. After night had fallen, somehow, M got on to a patch of mobile coverage. He started reading about ‘Whales At Night While Cruising’ – until he started discussing such things with me – in the dark of the night – I had felt quite confident in the sonar radar system of Whales. This confidence began to crumble as M mused on running the motors…

“No!” I insisted. “I would rather meet a whale than run the motors all bloody night when we have a reasonable wind to use.”

“Some people,” mused M, sidetracking, “play loud music to send it through the water so they know you’re approaching. But I might start the generator – at least it will be topping up our batteries while broadcasting our presence to whales…”

I had an immediate vision of standing out on the bow, Titanic-style, as glorious music poured from my speaker, both thrilling and warning any of the larger inattentive sea mammals.

Bloody M and his sound engineering knowledge. He said stuff about water density and soundwaves and air and various other things, prompting my Titanic vision to die a short death. I ended up putting the speaker facedown to the floor on the lowest part of the boat (right near the sleeping Smalls) and thought it was only fair to blast out Suzuki Violin Volume 2 – everything on the boat needs two uses, and blasting violin would imprint upon the Smalls as they slept, and warn off whales at the same time. Two birds. Stone. And this is what we did.

After my regulation 11pm to 2am slot, I lay down and tried to sleep through the blaring (though muffled by three blankets and a pillow) strains of The Two Grenadiers backed by the thrum of the Honda. Back up at 5am.

With the dawn came a realisation of quite how RIDICULOUS M and I had been in the night. Once I had silenced the violin and turned off the generator – in the bright light of morning it was bleedingly OBVIOUS how much noise Bella Luna makes as she sails along. The slapping of the hulls on the water, the rattle and clunk of the centreboards – any whale worth its sonar, asleep or awake, would have heard us trundling along.

However, the hangover from the Mysterious Affair of the Whales in the Night was that neither of us wanted to do another overnighter. We decided, instead, to pull in at Middle Percy Island – one that our books say should not be missed. We would stretch our last bit of diesel, and try to find water.

As we approached it was as if Lady Musgrave Island hadn’t been quite tropical-islandy enough for me. “No,” said Middle Percy. “Lady Musgrave is coral and guano, but I… I am a proper Tropical Island.” 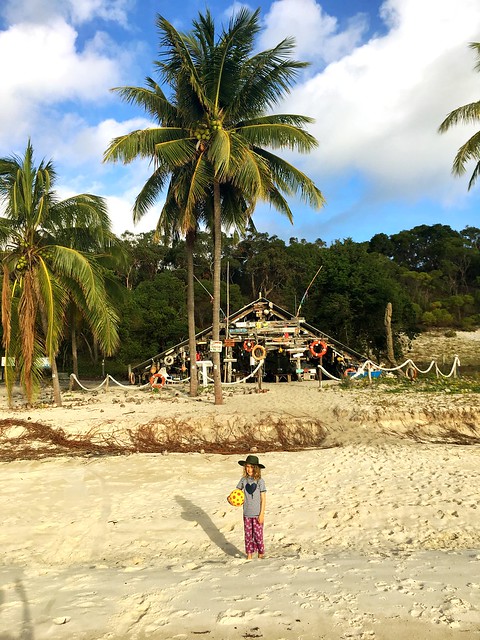