Not until half an hour before we dropped anchor did we know for sure that we would make it to Moreton Island. We wouldn’t have been so keen to stop there if my cousin (who until a year or so ago, lived with her family in the lighthouse accommodation there) hadn’t been there on a family camping trip. She had given me the dates a week or two back, but of course, we are unable to plan very far ahead being so very weather dependent and I hadn’t been able to say whether we would make it or not. 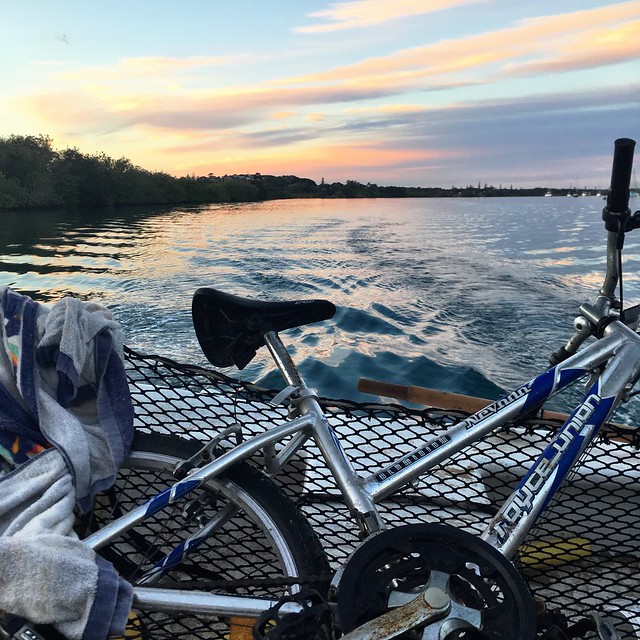 Tweed Heads disappeared behind us early in the morning and we had put in about 11 hours, sitting on eight to ten knots all the way until the last hour or so, when the wind largely disappeared with the daylight. I was SO excited to see their lighthouse (and I do still think of it as their lighthouse) – it guided us (along with the iPad) through the dark to our anchorage…

It was only a sheltered anchorage because the wind was offshore, and forecasted to stay that way for at least 24 hours, which is all we needed. 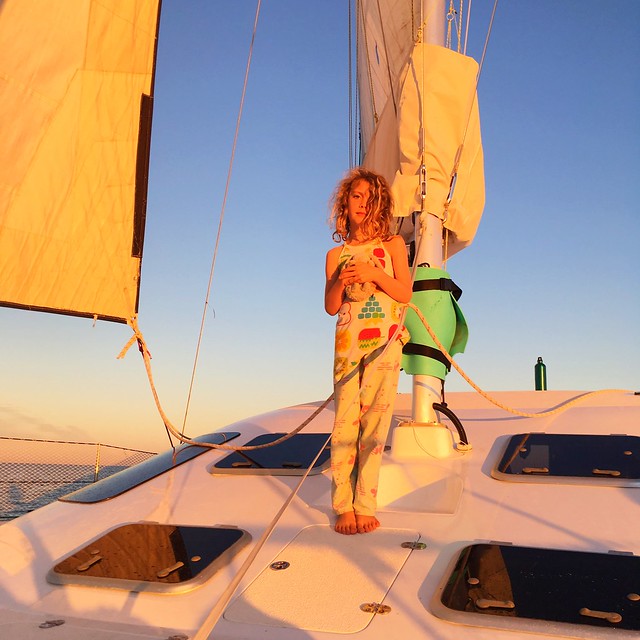 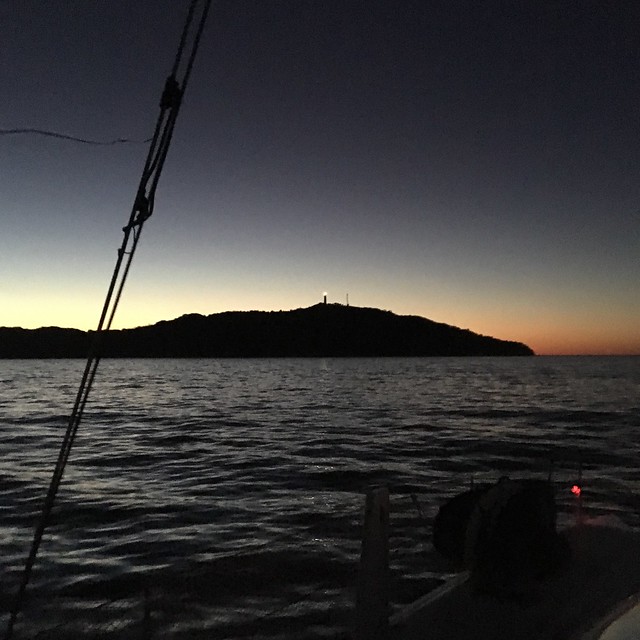 It remains a buzz to wake up somewhere that you haven’t seen because you arrived in the dark. Going ashore (M doing a sterling job of nosing us through the waves into the shallows) we landed on Boulder Beach. Moreton Island is big. MASSIVE. And purely by chance we had turned up on what, I was reliably informed, is one of the most beautiful beaches on it. 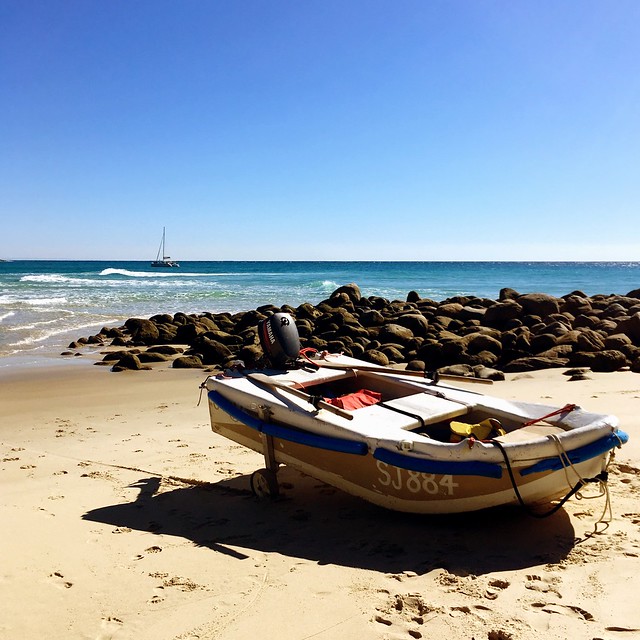 Being there – with no phone reception, no one on the beach, nothing but three prawn trawlers anchored way out, resting – my body took a deep breath that I hadn’t known it needed. Not since Tasmania have we been mostly uninhabited while places – out of necessity as we have been coming up the coast, we have stopped in where we needed to provision and/or rest.

“Oh my gosh,” I said to M, as the Smalls ran away down the sand and began climbing the rocks, “It must be killing them, having to leave this for the city!!”

Of course, I was speaking as a sparkly eyed new arrival in the warm winter sunshine – summer on Moreton Island is a whole other story. For one thing, it’s TOO. DAMN. HOT.

The Smalls were almost manically obsessed with finding their cousins (well, second cousins, but I’m trying for brevity) – not having any phone coverage made it an exercise in exploration. Which made them even more impatient. “WHERE ARE THEY?” they kept chorusing, in an endlessly wearying manner. 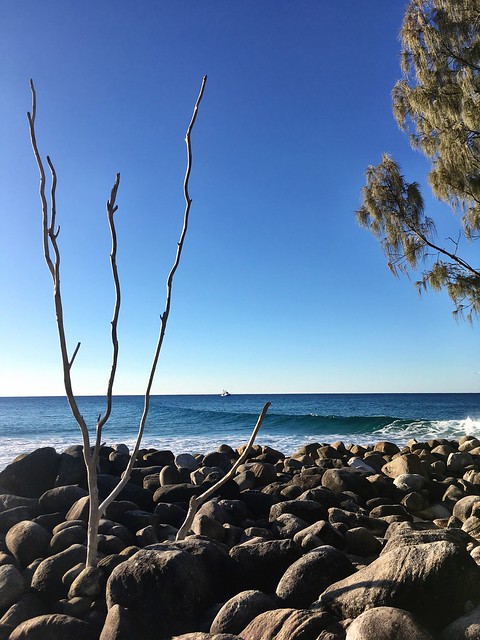 In no way had I expected, even a day or two before, that I would be spending my Wednesday morning hunting for my cousin on an island that sticks out into the Coral Sea. Ha! 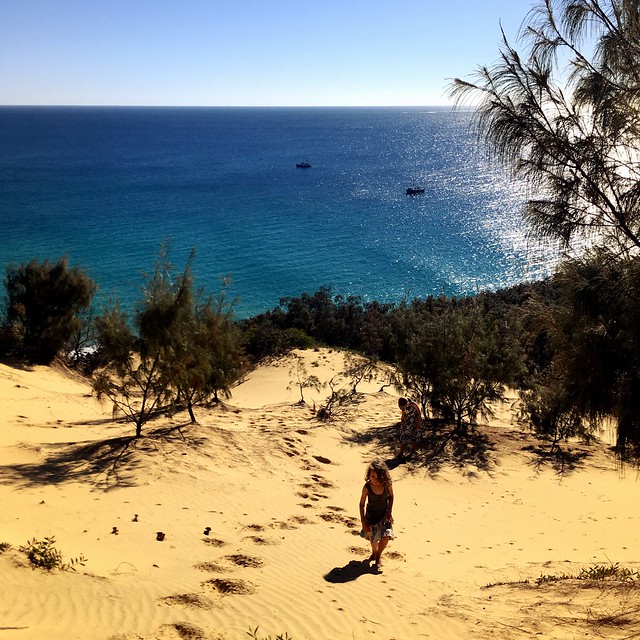 We scaled a sand dune or two, looking for them, and eventually came to their lighthouse just as they pulled up in the carpark. HUZZAH!! The last time we had seen Sam and Keiran and their two boy Smalls, they had visited us while we were living in the boatyard – we walked past their old lighthouse accommodation home…. 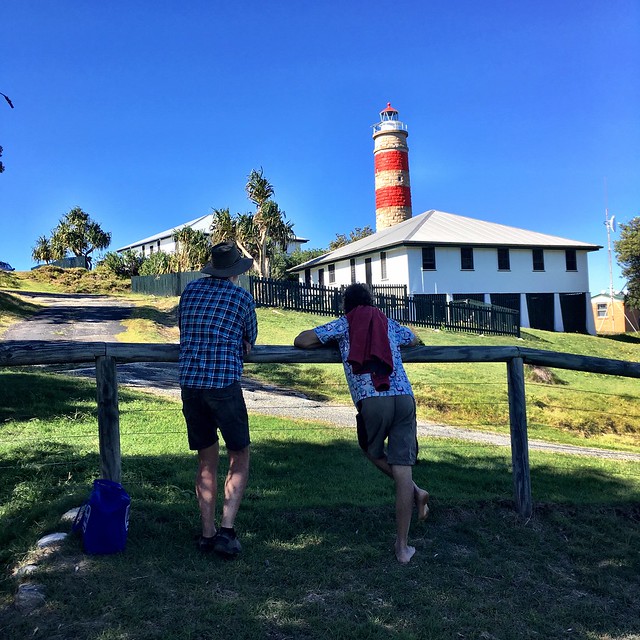 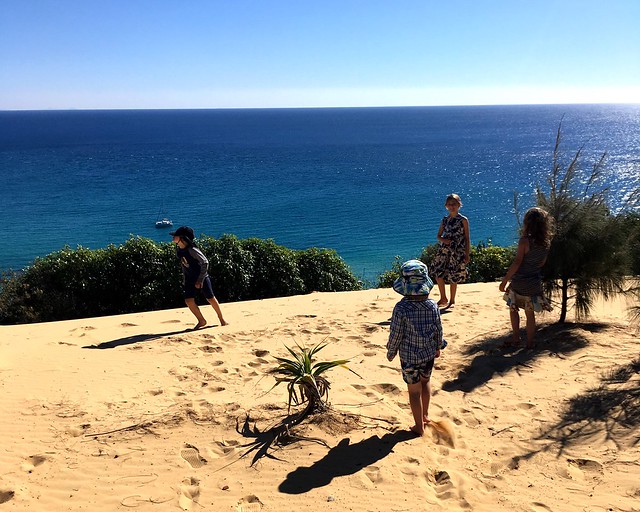 …and gradually made our way back down to Boulders Beach, where we settled on the sand under the shade of the trees. There was snacking, chatting, games, swimming…later we saw dolphins, spouting whales and sea turtles. The whole day was extraordinary in its easy wonder. It is so special to spend time, however brief, with YOUR PEOPLE! And in idyllic setting in a situation that depended on a large measure of serendipity… that added an extra layer of awesome. 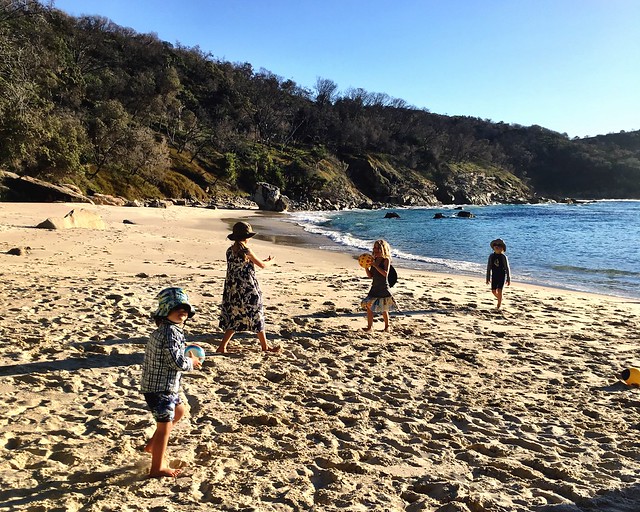 We said our goodbyes just as the sun was going down – they went back to their camp to nosh on kangaroo bolognaise – we climbed aboard and dined on ‘roo and rice’. We left Moreton Island as the sun came up – aiming for another big day sail. Destination? Double Island Point. The last stop before crossing the Wide Bay Bar.