It’s always the same after we have stayed somewhere for four or five days. In the case of Yamba, we were waiting for a part for the autipilot to arrive, having belatedly realised that Express Post does not exist in Yamba because it has no nearby airport.

“And that’s the way we like it,” stated our favourite post office worker. “If you want to live in Yamba, you should be chilled enough to wait three days for your Express Post to arrive.”

We could only agree. It was hardly a torment to hang about in such a lovely spot. I had to – yet again – hoist M up the mast to press the reset button on the Ubiquiti Bullet M2 antenna. It’s getting a little old… 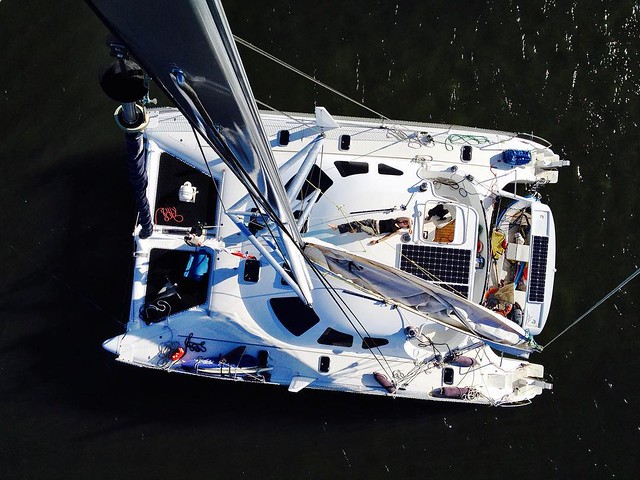 Our part arrived in Yamba-time, M installed it, and we waited for reasonable wind to make our exit and continue north. He also (glory be) fixed the generator starter-cord.

Yeah. We found that reasonable wind and headed back out to sea. Having spent four or five days in Yamba, my sealegs had walked out the door without saying goodbye. It didn’t help that the ocean was all sloshy with some added swell. I made us breakfast and almost threw up on my own feet. Glerg.

M had mentioned somewhere along the line that we might be able to stop-over at Byron Bay – it’s a known ocean anchorage. Meaning –> you use it as a rest stop, not as a hangout. I insisted on stopping for the night – which, retrospectively, was the right thing to insist on. We’ve done quite a few overnighters, and they are fine – but I remain pretty trashed for a day or two after each one – there’s just something about waking for three hours and sleeping for three hours that my body has a delayed reaction against.

An hour before we anchored in Byron Bay, but within sight of the lighthouse, M shrieked “FISH!” (While in Yamba we had buckled and bought a proper lure with a wire trace on it – the magician in the fishing shop made it up for us – M had whacked that on the end of some venetian blind cord wound around a handline reel.) 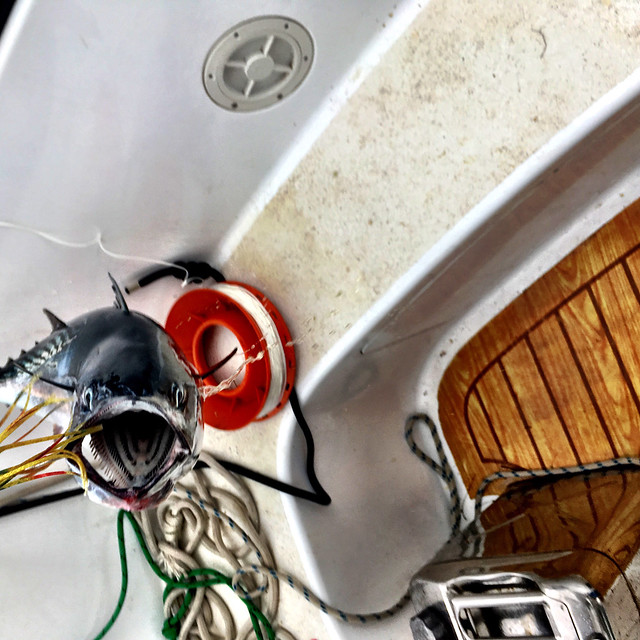 When M shrieked, “FISH!” he was not understating it. I turned around and saw him pulling in the biggest fish I have ever seen anyone catch. My first thought was, “WASABI!”, my second thought was, “CAMERA!” and my third thought was interupted by M yelling for a towel so he could grab the FISH…

In amongst all my brain activity, my feet had been moving of their own accord (attached to the sealegs I no longer had) and I had fetched our sharpest biggest knife and a cutting board. Ha! The cutting board was about one third the length of the FISH – but the knife was quite effective… 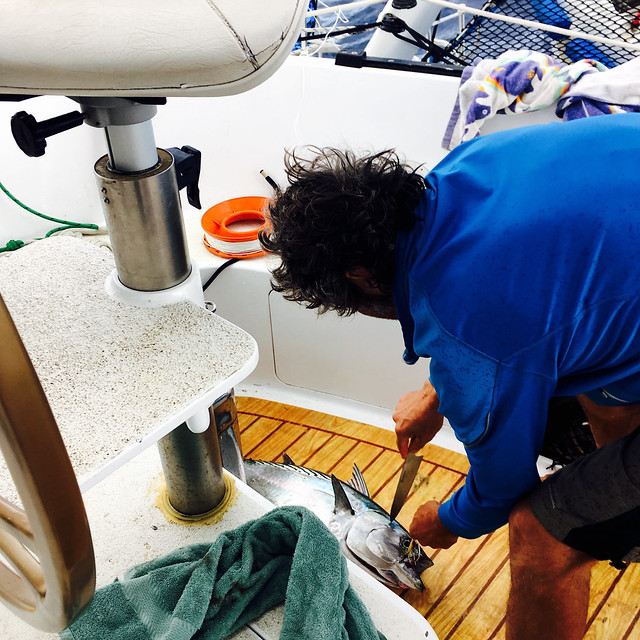 Then half of the cockpit was awash with FISH blood and I heard M utter the magical words….

He said it in the same hushed tones he used when he said, “I think it’s a boy,” when Small Z was born. Thankfully, on this occasion, he was a little more accurate. TOOOOOOONAAAAAAH!

Keep in mind, however, that this had never happened to us before. What do you do when you hoick about 8kg of sashimi out of the sea? SCRAMBLE! We lost our favourite collapsible bucket over the side, I tried to sluice the blood from the decks with an empty cut-down milk container we use for bailing out the dinghy – and in doing so succeeded in giving both M’s feet a washdown in tuna-blood… At which point, in savagely calm tones, he suggested I go inside for a spell…

I suppose most people wouldn’t think that being the arcitect behind someone else’s fish-blood feet humorous – but I was high on potential sashimi and thought it was hilarious (in an exploded black-pudding kind of way). After an appropriate staying-out-of-the-way period, I returned.

“Put the FISH on the front net,” I suggested to M. Because it apparently had to ‘bleed out’ before I could begin breaking out the soy sauce. This was done. Meanwhile, Byron Bay Lighthouse, on the southern most point of the mainland, got closer. 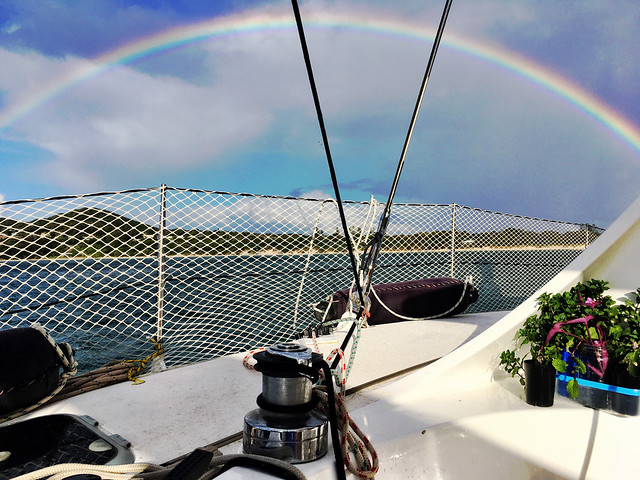 I steered us on a course to take us past it and into the bay – actually right near ‘The Pass’ – the famous surf break. This meant that we were kind of going sideways to the waves – a nausea inducing situation, particularly if you are M, on the front nets, chopping the world’s largest FISH into steaks. When he got back, he was as queased as I’ve ever seen him.

Once we had dropped anchor, it was obvious that it was almost impossible to get ashore. And what I mean by that is – if it had been just M and I, we would have totally done it – but with the Smalls? Too dicey. And what follows is why I love M…

The thought of endless sashimi but zero wasabi (because we secretly thought we would never have use for it, our previous lures being largely made of intricate knots of hope and longing) was too much for him. “I’m going,” he proclaimed – lowering Foamy into the water with his Yamba-hard-rubbish bike as his companion… He cranked the outboard and disappeared, scattering surfers in his wake.

What followed was (I imagine) kind of like that Cliff Richard Wired For Sound video clip – but M was on his bike instead of rollerskates. He rode through the blissfully scented and salt-brined air of Byron Bay along a wooden pathway, his eyes resting occasionally on Swedish backpackers and chilled out surfer dudes. He cruised on his magical bicycle all the way to the supermarket, stopped by an open air concert on the way back and eventually returned to Bella Luna brandishing a tube of WASABI!

And I ate more tuna… TOOOOOONAAAAAAH …..that night – both raw and cooked – than I ever had before. And there’s just as much again stuffed into our freezer. Glory be. Thank you FISH. Thank you Yamba fishing shop. *genuflects* 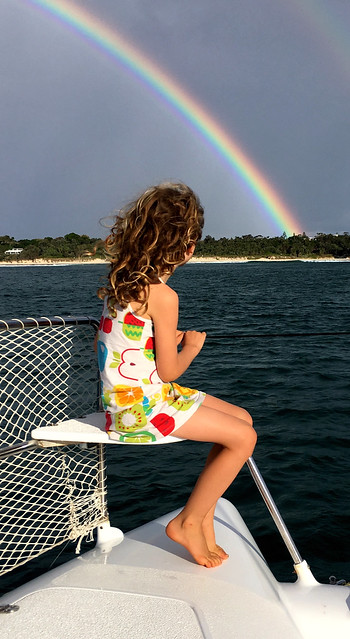