After leaving Orford, we dropped anchor at Passage Beach at about 11pm – back where we had seen a shipwreck before Christmas. The boat is STILL on the beach! (We did report it after we saw it the first time – because it had obviously not been there for long at that point.)

I do like waking up in new places 🙂 The water was super-clear. So clear, that I felt to commune with my dad, who began every day he was on the water with a naked plunge. So I nakedly plunged – from the front of the boat. Swam to the back steps and jumped out.

It was about the third or fourth time I’ve swum in Tasmania – after the last time (in Strahan) I got so sick that I was a little anti-swim for a while. Now I am just anti-swimming in crowded harbours… There was no real chance of repeating that here…

We moved over to Bryans Corner a little later on, where we saw a boat we recognised. The Daisy Belle! M and the Smalls went to visit, as they had a 10yo and 6yo on board – while I spent some valuable solitary time aboard, soaking up being solitary 🙂

Here’s a picture of DB in front of Daisy Belle in Hobart on Christmas Eve:

I took the Smalls ashore later in the late afternoon – they were fractious and annoying. It was time for M to have his draught of solitude – he used it to catch three flathead. We walked up the beach for ages…looking at shells and driftwood. On the way back, the Smalls practiced their handstands and cartwheels…

Where to next? Not far.

After a lengthy discussion the next morning about where we should head in view of the impending weather, M and I eventually decided to spend tonight at Wineglass Bay and then depart for St Helens, with the intention of being tucked away until the weather improves.

Two hours after our discussion we had left Bryans Corner… and dropped anchor half an hour later in Crocketts Bay on Schouten Island. Holy crap! The water continues to have an unnerving clarity!! We saw a shark, a stingray, a flounder and a school of fish. 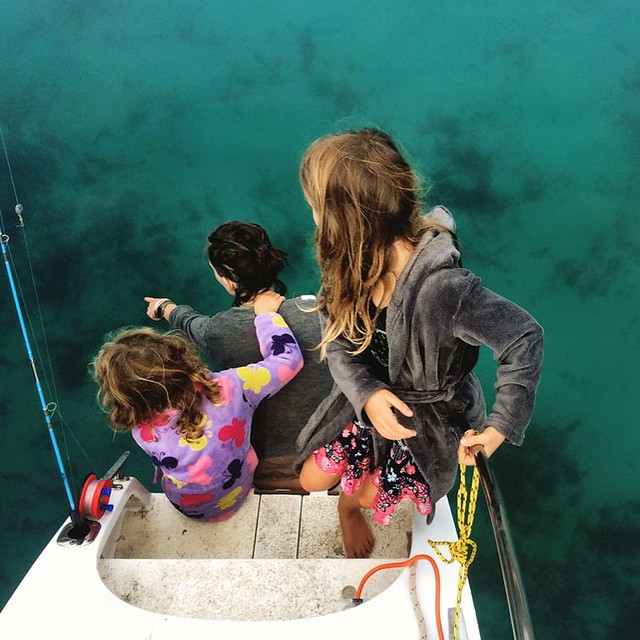 Once we got ashore, we saw a sign for a walk up Bear Hill. So we embarked on quite an epic climb…

We were determined to get to the top of Bear Hill, and this meant climbing steadily for about an hour, sometimes hauling ourselves up with hands and feets… The Smalls did very well. 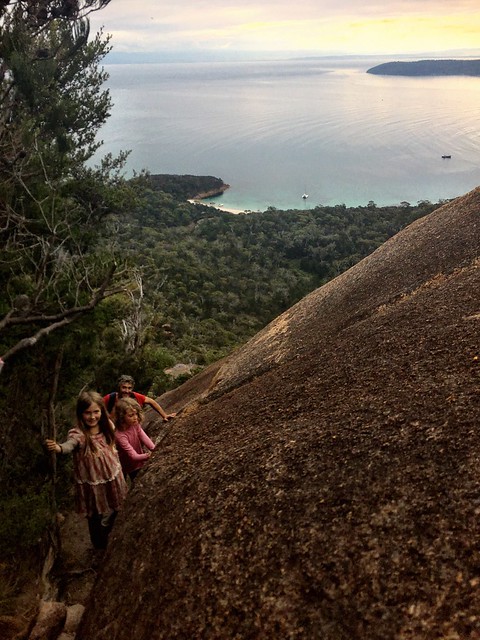 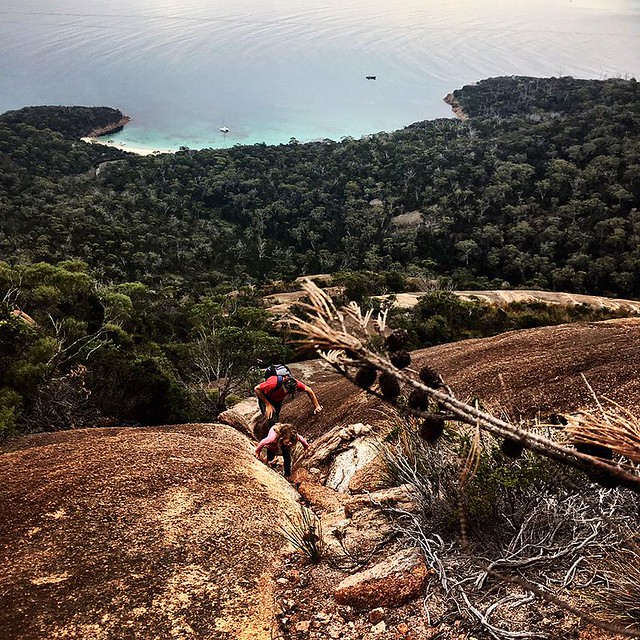 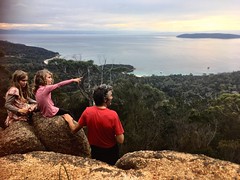 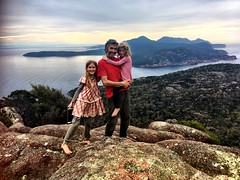 We departed the beauty of Schouten Island at about 5am or so – I helped pull the anchor up and then, despite my best intentions – after making M a coffee, I went back to bed.

I feel no shame in declaring that while I CAN sail in the ocean swells, it’s not something that I hanker for. M did 95% of the steering and handling all day, while the Smalls and I lay prone inside. It is possible to remain in the cabin…

AS LONG AS ONE IS LYING DOWN…

And thus I watched Sherlock and even did a bit of crochet. I did get up to make baked beans and some cheese and biscuits, and promptly had to go flat out again. Yucko.

The weather was grey and rainy. M, although preoccupied with the fact that we would have to cross the bar at St Helens, was secretly enjoying himself in the wet and the wind. Or not so secretly. He got us to the bar at the perfect time – with two hours to go until high water.

We found our way in over sandbanks, skirting around the wreck of a scallop boat from a few years ago. St Helens is a long way past the bar! A shallow, shallow bay, with the town right the end. It was dark by the time we got there – and although we had been planning to anchor out, we found a spot on one of the jetties, and tied up there.

It had been a long, long day. But huzzah! Our first bar crossing in Bella Luna!! Good preparation for all those rivers in northern New South Wales that I want to investigate at some point.