Franklin to Kettering to Hobart – hooray!

We left the Petty Sessions jetty early, about 7am, and left the Huon River behind us. Our first stop was, again, Copper Alley Bay. The blackberries were no longer in season, but we were able to plunder my favourite feral apple tree with enough apples to keep us going for a week or so… 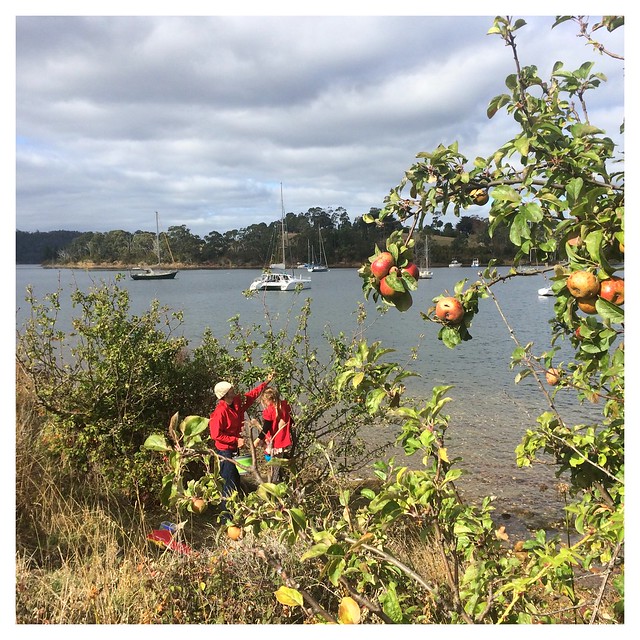 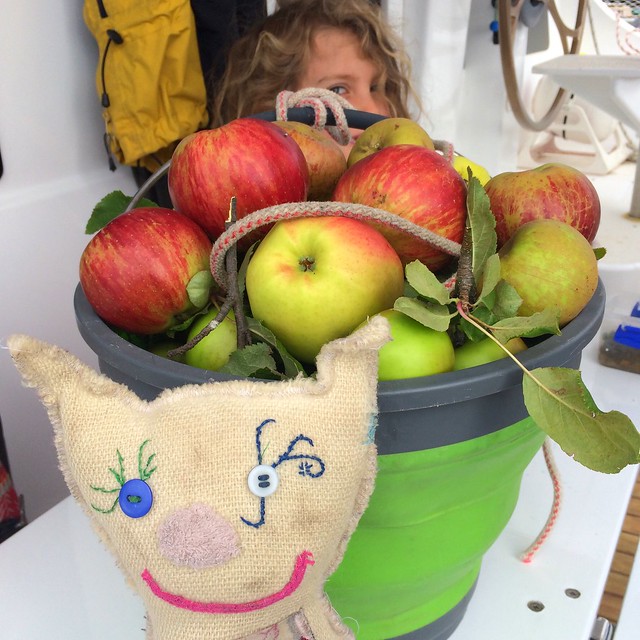 Then onward to Kettering, where we wanted to refuel and top up our water. M was keen to catch up with Ben, a guy we had met there before, and seen again in Strahan. It seemed to take an unnecessarily long amount of time to get there – M did all the work, while the Smalls and I lay prone inside and whiled away the hours.

About ten minutes after we’d tied up, I had the Smalls with me down at the excellent laundry – $4 a load. I put the clothes on to wash and then fed the showers three $2 coins and washed us all. I actually don’t even remember when the Smalls last washed, so it was quite the event.

On the way back we saw people looking down at the pylons underneath the dock: 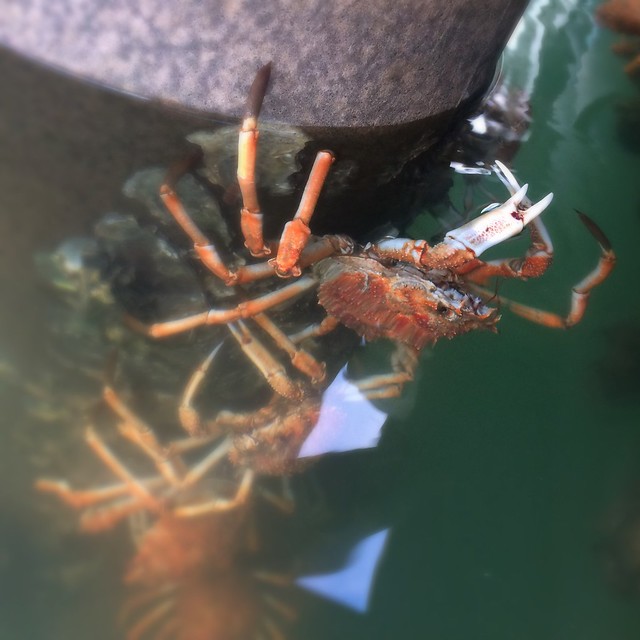 The wifi at Kettering is screamingly fast (via our Ubiquiti antenna) and Small DB delighted in being able to watch ABC iView for kids at whim. Being plugged into shore power can only be described as superbly decadent. Like someone paying for your hotel room, including the minibar. We can run all the lights, the radio, the stove – THE LAPTOP – without a thought for the batteries…

M, very unusually, went to the pub with his mates from the other catamaran and had a great time. In the morning we hung around until midday to get some more fuel and to catch up with Kerry – who runs the Yamaha shop in Huonville. We were swapping tales of Port Davey, and he described a photo of his son and his son’s friends on TV hill. He later sent us a copy, and it is a fantastic shot – they are all entirely naked… I would *love* to post it here…

The sail to Hobart took three and a half hours. During that time I had some kind of epiphany about my mobile phone situation.

[—here comes a tangent—] I have had my trusty iPhone 5s for a few years. About six months ago, Small Brother gifted me his iPhone 6 – for which I was grateful, but would have been much more so had it been unlocked from his US carrier. I tried several avenues – both legal and not – to have it unlocked. All failed. So I used it on wifi and in the last few months have been using it for photos, because it had a better camera.

But as we sailed toward Hobart on Tuesday, I had finally had enough of having two phones in my life, and got on eBay. By the time we got into Hobart I had sold Small Brother’s phone, and made it to the post office before 5pm to send it on its way.

My 5s sold later than night. I then had enough money to buy my dream-phone. The iPhone SE. On eBay, of course. It arrived the next day, having been express posted from Adelaide for free by a nice man called Les. I am so excited about the camera! Huzzah!!

At our favourite spot in Hobart, Apache was tied up and we caught up with Grant. We love you Grant!! And, we love you Hobart!! On Wednesday morning we boarded a bus and then walked up the hill to Wonderland the Tip Shop. M wanted a large hand-reel for fishing and found one almost immediately – and even more so when the guy on duty gifted it to him.

The books there are fantastic if you have the patience to look. However, it always seems like my patience is the longest – because I could stay there all day. I don’t have a problem with accumulating books on the boat, as we op-shop them or do book-swaps as we travel along.

Small Z got a couple of dresses and I scored a Waverley Wool Mills pure wool blanket for six dollars – JOY! JOY!! I had been hoping to acquire another because the nights are getting very much cooler.

We ended up walking all the way back from the Tip Shop – stopping halfway for a cup of coffee and tea and also visiting the best op-shop in the world in South Hobart. It was about 4km walk back – we had some proper lunch back a Bella Luna and then ventured back out to Eumarrah – where we spent a stupid amount of money with the intention of beefing up our supplies for the long trip ahead.

Stopped off at the library and then dragged ourselves back to the boat. A big day, well spent. It’s so lovely to be back in Hobart.