Old River, sheltering at Clayton’s Corner and a birthday

We spent one night at anchor near Old River, and explored the river in the morning in Foamy with the intention of finding some rapids to get some drinking water. M had been told there was a little track we could walk along. 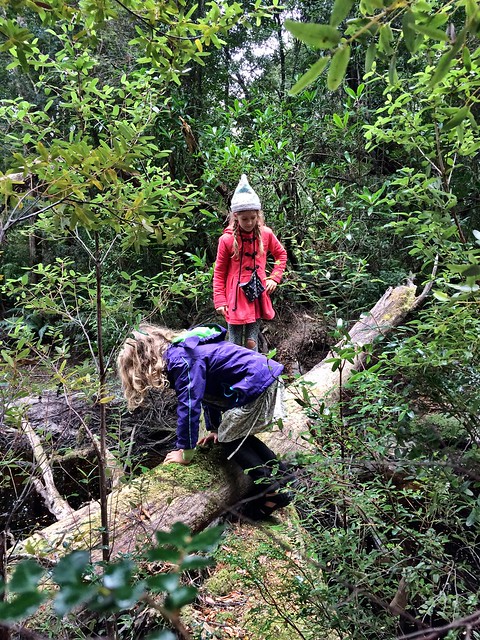 We eventually found the track, where someone had kindly left two well cut walking sticks. Leaving Foamy tied up to a tree, we went ashore and wandered along the track – I use the term ‘track’ loosely – it could easily have been made by a wombat.

The bush here was truly beautiful – wide gaps between big trees, mossy ground, all different shades of green. We saw huge Huon pines and a dry creek bed full of different coloured stones and pebbles. So many pink pebbles! At around that point I realised I could hear rushing water – the rapids!

A little further on, we scrambled down a bank on to a wide swathe of river stones on the other side of which was the river, swooshing along. It seemed that we had taken Foamy down a little offshoot of Old River, and had now rediscovered the river proper.

The river stones were too tempting to pass by, so we stayed a while… 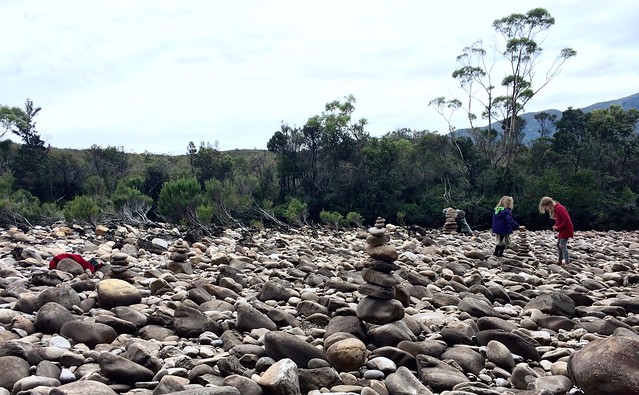 The walk back to Foamy seemed brief. We navigated back down and did a kind of u-turn toward the rapids we had found. We ate our very rudimentary lunch on an island of river stones and collected 40 litres of tea coloured water where it was flowing fast… 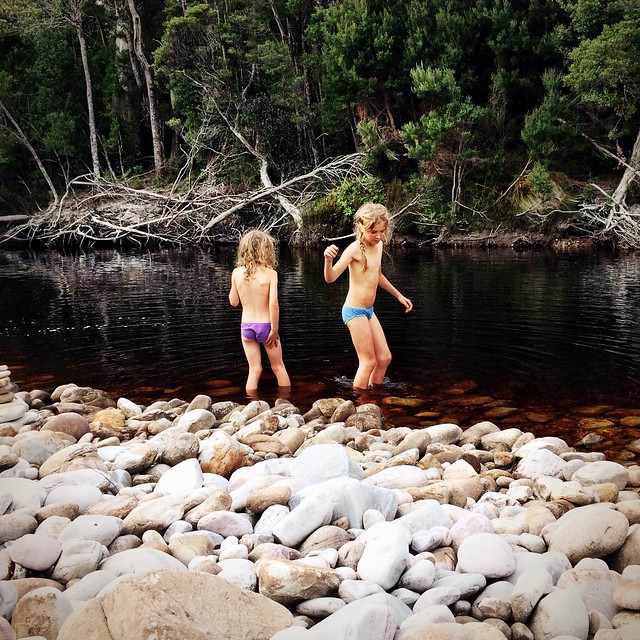 Back at Bella Luna the weather forecast was unobtainable, so we moved until our antenna could pick it up. Gale warnings were forecast in a few days time, so M decreed we should return to the shelter of Clayton’s Corner before anybody else got the same idea and there was no room at the jetty.

We tied up back at the jetty – there was one other boat there – Amnesia II – captained by the excellent Alan. 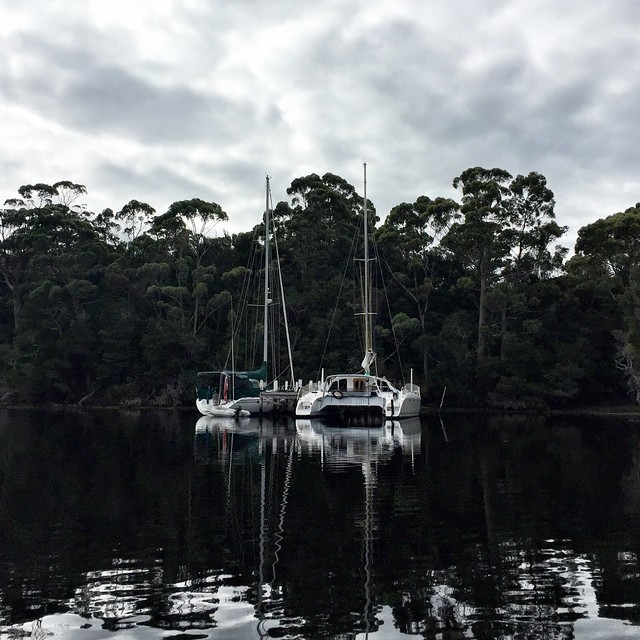 Over the next few days Alan joined in singing Happy Birthday to M and shared his cheese, crackers and smoked salmon with us in front of an open fire in the house.

There continued to be a steady trickle of visitors to the house – kayakers gliding through the rain to go exploring onshore and the little tin tour-boats with any from three to ten people aboard. The day before M’s birthday I stayed in the kitchen (I know that on a boat you are supposed to call it a galley, but I just haven’t got there yet) for what felt like most of the day. I must have washed up at least four times.

I can’t think why it all took so long, but it just did. We are down to frugal rations by now, but I had kept a tiny bit of maple syrup – and before we left Strahan I had bought the ‘Unbaked’ book of recipes from Whole Food Simply – and it saved me! I was able to make a raw chocolate mousse cake from the bits and pieces we had remaining.

Small Z made chocolate cheesecake bites (I think I’ve mentioned that we lack an oven) and these were another Whole Food Simply recipe – although we had no dark chocolate to dip them in. Small DB made her specialty – tinned fruit jelly. In addition to the preparations for the following day (including M’s present and card – I truly had not envisioned being tucked away in the wilderness for his birthday) – I also had to make soup for lunch…

M had been banished from the boat and had gleefully taken up residence in front of the fire at the house, watching Vikings on his iPad and sipping hot chocolate. He returned for a second helping of the aforementioned soup, heated up what was remaining and took two extra bowls.

“What are you doing?” I asked him.

“Taking some up for some people that just arrived.”

An hour or so later, the Smalls and I wandered up and there he was, chatting to his new acquaintances, Robert and Mischay. The room was warm and the rain continued… I told them of our plans for Frugal Birthday, Robert told hilarious tales of his bulletproof father, and Michaye, a painter, gave us the address of her studio so we could visit next time we’re in Hobart.

At one point, probably during some lament of mine about living on rations, one of them asked if we liked tuna. M and I nodded like labradors…
“No problem,” they said. “We’ll drop some by.”
I imagined that in their boat they had an excess of tinned tuna, until…
“We caught a huge tuna on our way from Hobart, and there’s no way we can eat it all…”

M and I fell over and died. Happily. And sure enough – just around dinner time that night, Robert returned to the jetty in his amazing watercraft – a uber-powered inflatable boat WITH WHEELS…

– and gave us almost a kilo of raw frozen tuna that they had caught two days earlier. He gave Alan some as well – and not only that, he let M decant a bit of his soy sauce into our own bottle. 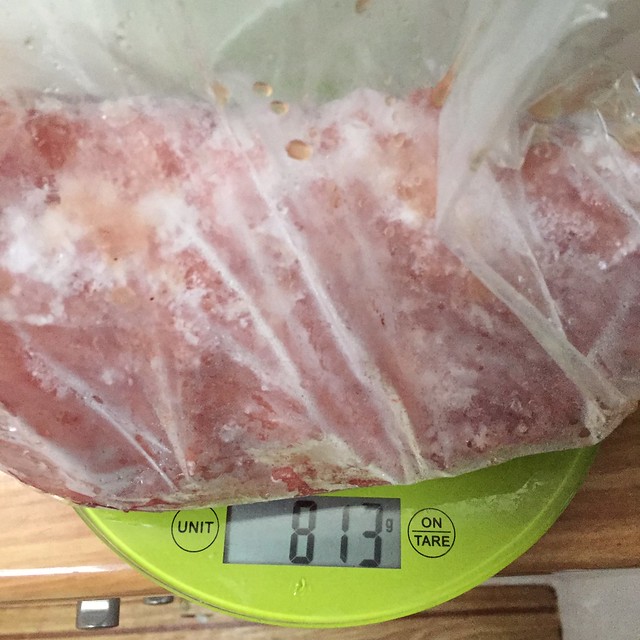 So lovely. M and I had the kind of dinner that we’ve not had for about ten years – we used to eat it now and again when we lived in the trailer. Raw tuna on cooked rice in a bowl. He had soy sauce and I, the glutard, had much salt and many seaweed flakes. It was heavenly.

The 29th of March, M’s birthday, was a hoot. It barely stopped raining for the entire day – the second day of gale-force winds. It did not matter. The Smalls decorated the main cabin, I made breakfast pancakes, and concocted some beautiful (if I do say so myself) labna with orange zest (last orange), vanilla, cinnamon and sugar. 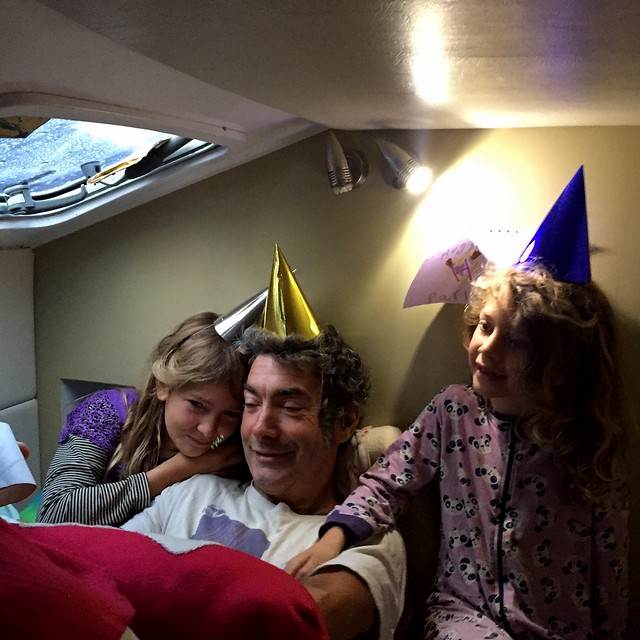 M had the last two coffees he will see until we get back to civilisation. Alan gave us a yell, and M went out to receive a goody bag containing six oranges (how did he know?), a tin of butter (I had never seen butter in a tin before) and…freshly baked bread rolls. M’s eyes almost rolled back in his head in delight – his very own fresh BREAD rolls that no one else could eat but him….

A bit later on there was another shout from outside – the Amazing Floating Wheeled Watercraft had returned, and Robert gave M a goody bag containing another BIG WHACKING CHUNK of raw frozen tuna, a purple cabbage, a bag of salad leaves and four carrots!! We literally went back inside (out of the rain) and had a dance party in the main room…and I immediately added two carrots to the dhal I was composing on the stove.