{* be prepared for some added navigational authenticity, as M has started his own journal and I can now refer to that for weather conditions and suchlike}

M and I were both relieved that our attempt to leave Macquarie Harbour failed. The conditions weren’t disastrous, but the trip down the coast would have been uncomfortable – choppy seas… Because I wasn’t well, I could not stomach the thought – and although I could have womanned up and done some nighttime shifts at the wheel, I didn’t want to. We have no deadlines, so there was no necessity to endure rather than enjoy.

Having left Strahan on Tuesday, we returned midday on Friday, staying until late afternoon on Saturday. This gave us the opportunity to stock up on a bit more food, top up the water tanks and M took the Smalls ashore most of the time so I could rest. I got to speak, via wifi, to Small Brother before he disappeared on his asian tour and I became incommunicado in Port Davey.

M was able to catch up with one of the guys who did some welding for us back in Kettering; he arrived on a big steel catamaran, and they planned to chattypants further in Port Davey – they were the only boat we encountered that planned to go back down the west coast rather than head up.

By the time we left I was feeling about 60% better – and the forecast for the ten or 15 hour sail ahead of us was too good to forgo. Minimal swell, and downwind all the way – although we would have to forgo stopping in at the Mainwaring and Wanderer Rivers. We left at about 4pm so that the majority of the sail would be through the night.

In the hour before we left there was a strong smell of smoke in the air, but I couldn’t see the source. I pulled up the anchor, and as I paused to take the rope bridle off before proceeding further, I saw something that had obviously just hitched a ride on the rope. A seahorse!!

“Stop! Stop!!” I flapped at M, who probably thought I’d caught my hair in the winch, or something similar. “A seahorse! A SEAHORSE!” It was the most energy I had demonstrated in days.

He ran up the front and grabbed it gently as I jigged about.

“Smalls! SMALLS!!” But they couldn’t hear over the noise of the generator (used to spare the battery when we haul the anchor up). He ran back down the boat to the main cabin and showed the gaping Smalls the lovely little creature – the showing was too brief for any photos because we wanted to return it to the water. I’ve never seen a seahorse in the wild before!

Leaving Macquarie Harbour was unexpectedly dramatic – and revealed the source of all the smoke. A bushfire – a big one – right near the heads and up behind the lighthouse. I posted a couple to instagram before we lost our unexpected patch of mobile coverage. 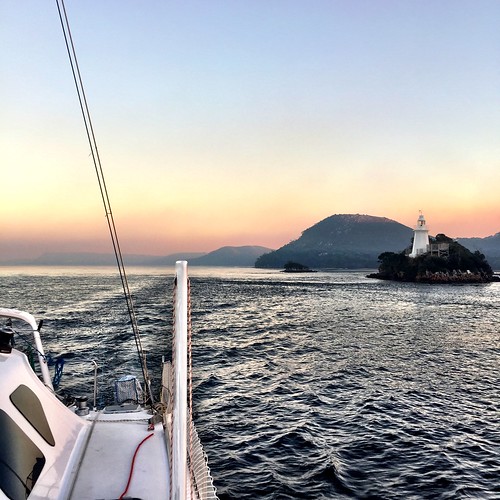 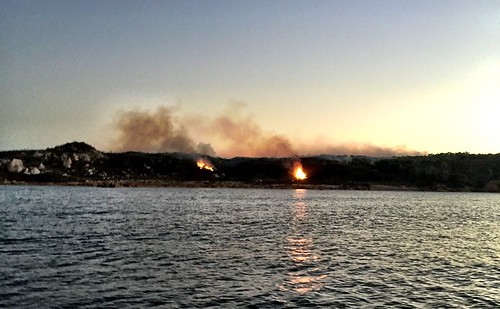 We sailed quite a way out to sea before bearing left in about a 2m south westerly swell with a 10-15kt northerly. After turning, we dropped the mainsail and continued with the jib, doing between 6-9knots (how’s my authentic sailing knowledge?! Amazing for someone who was prone on the couch…)

Small DB was sick almost immediately when she went to bed, poor little thing. M made her a nest in the cockpit near his feet, and that is where she stayed all night. Apparently she looked up and said, “Look at all the stars!” And was out like a light.

I steered between midnight and 3am, beginning just south of Point Hibbs – M had reefed the jib down before I took over, and I let a bit out toward the end of my shift because it seemed as if the wind was kind of dropping. Oh. I say, “I steered.” And until quite recently that would have been true – but acutally Hoo-Ray the Autopie steered for me, and did a very good job too, while I sat there scanning the horizon, sipping hot water and listening to podcasts. I still felt crap, but less so.

Wind continued easterly and Bella Luna was steady doing 5-6 knots. M took over at 3am, and I relieved him three hours later. I was hoping, HOPING we would reach the entrance to Bathurst Harbour while I was on watch – but…everything is slower than you imagine. That is true of pretty much everything boat-related… 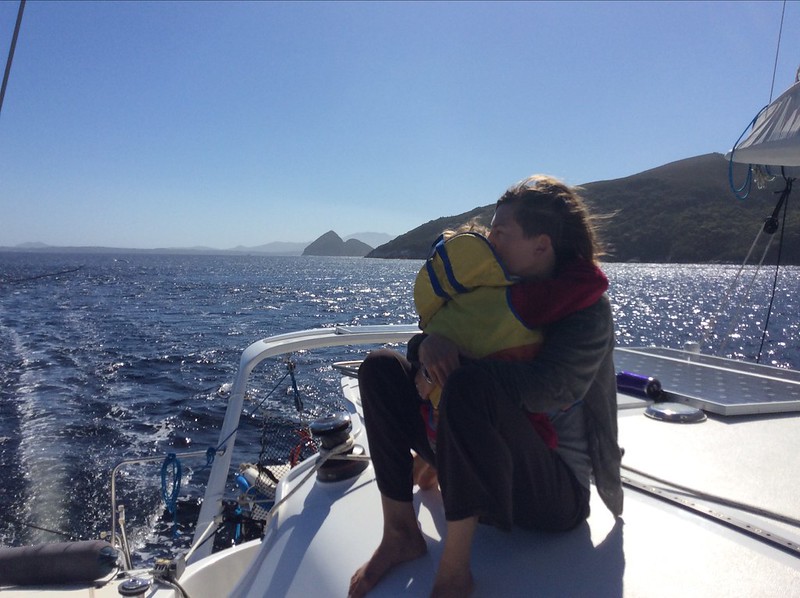 Zoe makes breakfast on the way to Port Davey

M reappeared at 9am and I passed out for four hours – when I awoke – we were in sight of the channel! Well, we would have been if it wasn’t a hidden channel. Instead we were looking at Breaksea Island, which hides the entrance to Bathurst Harbour. We sailed under a reefed jib all the way in and down the channel. 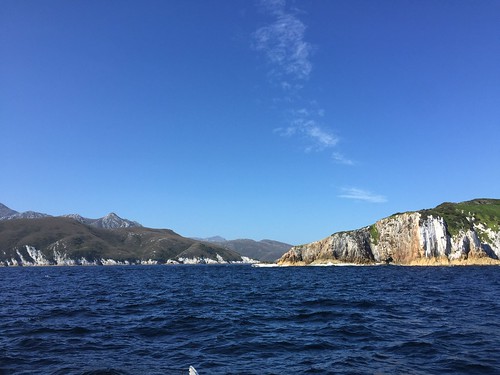 {To the right are the Breaksea Islands – we sailed around them on the left to enter Bathurst Channel.} 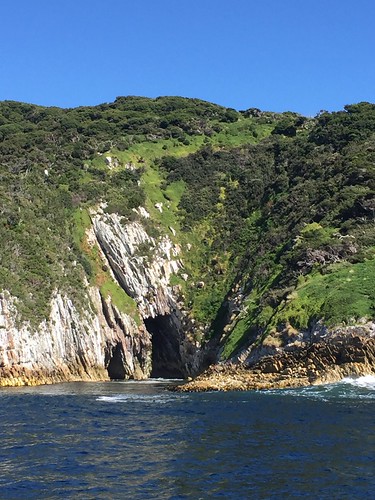 The rocky outcrops and cliffs and little white beaches… *boggle* I was thankful we only saw two other yachts. We had decided before leaving that we would sail right to the back of Port Davey to Clayton’s Corner and gradually explore our way back out over however many days it took (or whatever timeframe might be dictated by weather and/or food).

On the way we went through ‘The Narrows’ which, M tells me, breaks the famous South Coast Track. They get around this by having two aluminium dinghys for hikers to use to get across. They looked like they were in good nick – I did get a photo of the setup, but not a good one – my zoom is crapola.

We reached Claytons Corner at 3.30pm. From Strahan it had taken us 20 hours. There were two beautiful old double masted yachts anchored out together – but as we are able to navigate safely through water that is slightly less than a metre in depth, we tied up to the jetty. Such a thrill!! 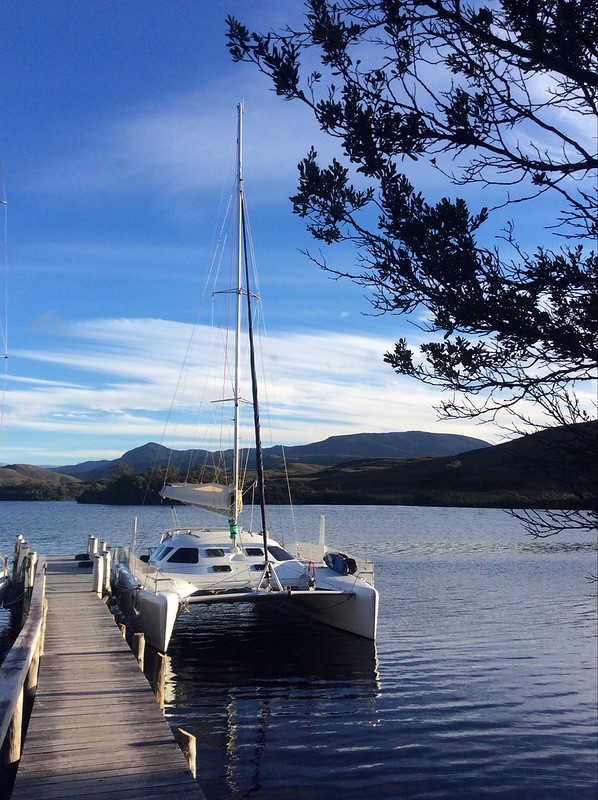 It was super exciting to be there – the place that I had read a lot about in the book Ian XPersimmon had lent me. The jetty leads straight on to the path to Win and Clyde’s house* – and the Smalls ran toward it.

Inside, the house was… well, it just felt like a benign and happy space. Small Z opened the door and instantly said, “This smells like Beard’s house.” XX And she was right, it totally did. Woodsmoke, books, an Aga and a big cast iron teapot. Some reference books, wood by the fireplace, a little swap-library and information about Clyde Clayton and Winsome King, who lived there between 1962 and 1976. We signed the visitors book and marvelled at the way the garden used to look fifty years ago.

We got an early night. 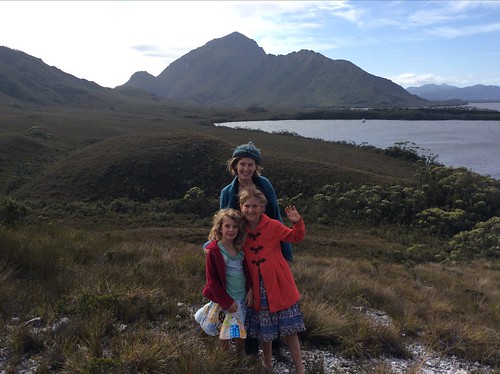