We left Franklin in the care of Grant and put the Huon River behind us – not sure of where we would get to before stopping. Leaving the river took quite a while, and we decided to head to Copper Alley Bay for another ride on our friend’s mooring.

The time there was almost a replica of the last time we stayed there – beautiful weather, stacks of blackberries and apples on the shoreline – the plums had finished (though there were some low hanging prunes) – we met a friendly dog. 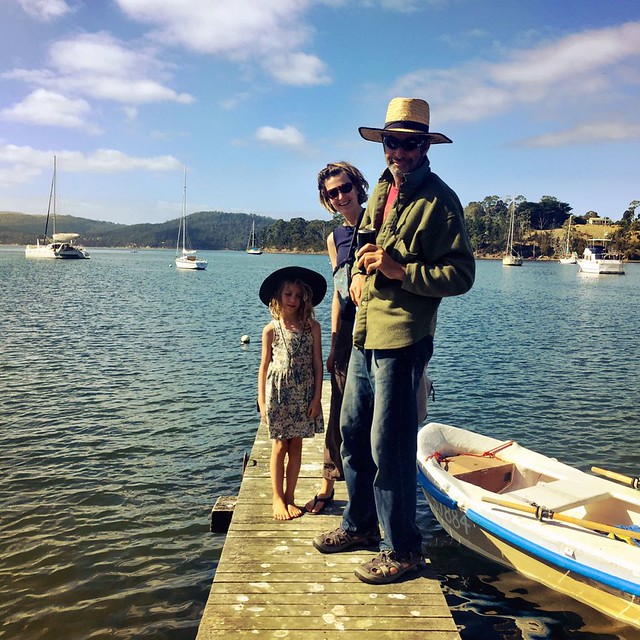 The Smalls and I could happily have stayed for hours and hours, scrumping and foraging, paddling and exploring; but M was keen to get away and start our long awaited journey to Strahan – the first step of which was to get to Southport. We left just after midday, arriving in the late afternoon in Deep Hole Bay – a place that would rival Wineglass Bay in a beauty competition. Clear water, white sand edged by trees and scrub and a sandbank… 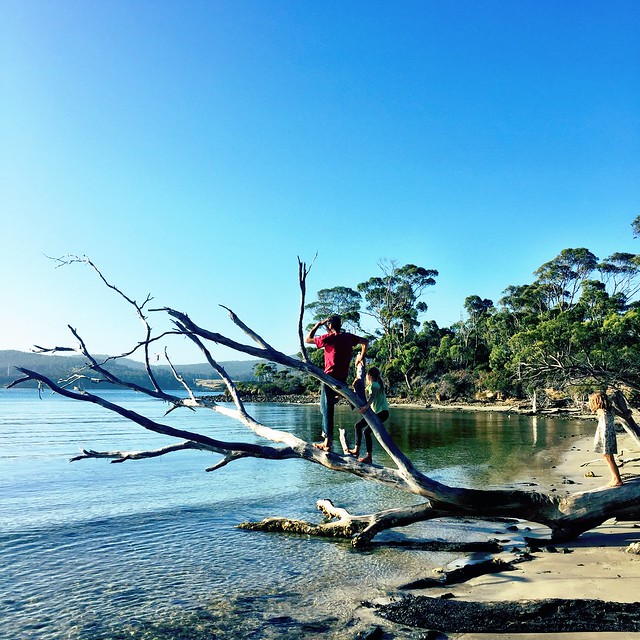 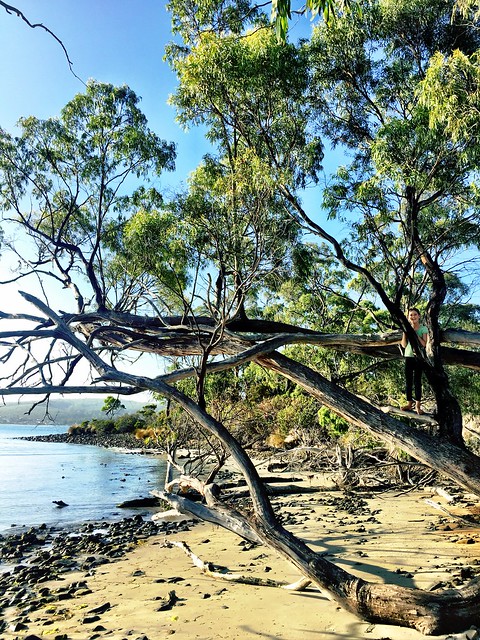 The sandbank is the key right here. M needed to put our new secondhand propellor on (the one we waited so bloody long for still having not arrived in Huonville – see ranting here). The other thing that has long needed attention is the state of the hulls – the bits that are constantly submerged in water.

Over the past few months we’ve watched, with mounting horror, the WEED and SLIME attach itself to the bottom and sides of the hulls on top of the antifoulX. Deep Hole Bay was the perfect place to address this, and so – on Friday 3 March 2017 – M and I had breakfast, donned our wetsuits, put the Smalls on surfboards over the sandbank, and set to work.

He did the propellor. I did most of the de-sliming, armed only with my savage strength and one of those green scrubby things you use for scouring saucepans. The water was about waist-deep. M had a momentary lapse in cool when an essential piece of outboard motor fell to the sea floor.

Such was his urgency and desperation that I couldn’t get out of him what the hell the thing I was supposed to be hunting for actually looked like. He kept diving under the water and spluttering – in the time it took me to grab a mask and snorkle and try and make sense of the situation, he had found it. Whatever it was…

I returned to scrubbing. M caught a few waves on his surfboard as a calming mechanism and impressed the Smalls no end. I did the starboard hull and started on the other side. This, unfortunately, was not in the sun…as I scrubbed, things started to feel different…. BARNACLES. OMG ?

Why there were barnacles on one hull and not the other made absolutely no sense to me (any suggestions welcome) – nevertheless, I scrubbed and wrenched them from the underneath of the hull. M, having finally replaced the prop, came to assist.

I returned to the first hull and, now I knew what to look for, found a few barnacles there as well – clustered around near the entrance of the centreboard – the same place as on the other side. However, there were about 80 percent less – weird.

By the time I had done two hulls I had been in the water just over two hours. Despite the fact I had a sleeveless wetsuit top on under my full length wetsuit, I belatedly realised that I was so cold, I couldn’t stay in the water a minute longer.

It took me over an hour to defrost and feel my feet. Small Z put me under her favourite blanket, Small DB got me a cup of soup and a hot water bottle. I don’t think I have been that cold since I almost ended up with hypothermia on one of my first dates with M, snorkelling at Port Campbell….circa 1997…

Just after midday, a motorboat overloaded with non-lifejacket wearing old blokes and accompanied by two jet-skis, pulled up on the beach. Our cue to leave. If I had known the conditions we were about to encounter I probably would have been more tolerant and just moved to a different part of the bay. Hindsight…sigh…

We were back in the ocean swell and I felt bleugh – but the wind was perfect to get us to our next port – Recherche Bay. Everything was going very well until we were about two hours out – the wind changed and the terrible tacking began. The hulls began slamming down each wave, as everything inside the boat jumped about half a foot every thirty second or so. (POUND — POUND — POUND)

“AaaaaaaaaaAAAAAaaahhhhhhh!” I shrieked, in what was not my finest parenting moment. “WHO THE FUCK LEFT THAT HATCH OPEN??!”

There was water pouring down from the hatch in the roof (POUND — POUND — POUND). I yanked it closed and realised I was ankle deep in water. All our backpacks hang near the floor – they were all wet. All our books were wet and damp as was my guitar (it was later found that the books and the guitar were fine).

It was then that I lost the plot, aiming my fury at poor hapless Small Z. To summarise, I screamed so loudly at her that my throat hurt – “I TOLD YOU TO CLOSE ALL THE FUCKING HATCHES – THIS IS A DISASTER – WHAT THE HELL WERE YOU THINKING?” I was so mindlessly witteringly angry that not only was I yelling at a nine-year-old who had not heard me tell her to close all the hatches, but I started throwing every towel on the boat into the salt water lake – where they sank gracefully to the bottom, making no impact whatsoever.

“I’m sorry mama, I’m sorry, I’m SORRY,” sobbed Small Z, but I was incoherent with rage. So furious, that I can’t even remember what I did next, but basically I lay facedown on the bed (POUND — POUND — POUND) while M steered and the Smalls took turns on his lap to defuse their seediness…. (POUND — POUND — POUND)

Meanwhile M – in about 30knot winds – was tacking in between rocks like a boss. (POUND — POUND — POUND)… while I remained face down on the bed, cursing my existence, my ongoing low-grade nausea, and my shouty horror-mother performance – trying not to think about the wet EVERYTHING scenario.

Finally, finally, the sea became smoother as we neared Recherche Bay, and I emerged from below, blinking and chastened. I think I’d slept for an hour, somehow. Apologised sincerely to my poor Small Z, and told M that I would make dinner, if he and Small Z could take care of the still-lakelike port hull – because I coudn’t look at it.

“Deal,” said M. He was far more exhausted than I, but got going with our Large Sponge and a bucket, and by the time dinner was assembled Bella Luna was bedecked with flapping wet towels…and theport-side floor was unusually clean.

Recherche Bay, as viewed from the boat, looked intriguing. A little blue weatherboard house sat with its front door opening on to the beach. There were about five or six other structures visible around the bay, each side of Cockle Creek, which feeds it from the top. 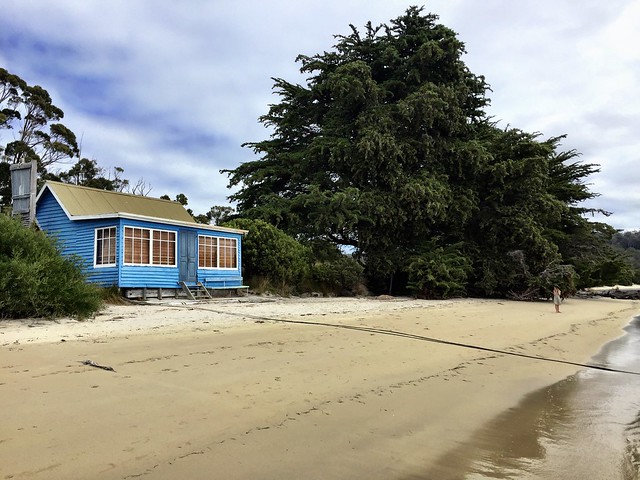 We could see campervans with solar panels attached to them, a bridge across the creek and the curve of the sand between it and a lifesize sculpture of a three month old baby whale.

“Tomorrow,” I told M. “There is no way I am going anywhere right now except bed.”