Every time I shower, I realise I should do it more often. But the logistics involve render it something to avoid. We could have just stood out in the buckets of freezing rain we had for a couple of days, but discomfort outweighed ease. The last two days have been soaked with sunshine – meaning washing, both clothes and – this morning – selves. 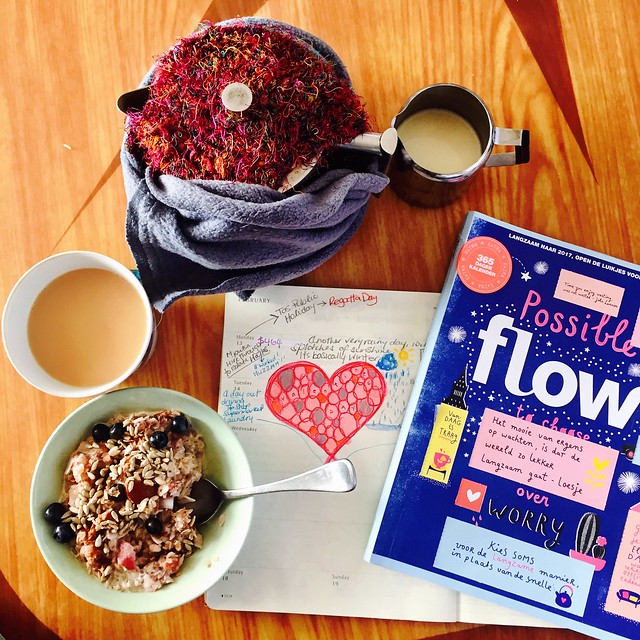 If our diesel water heater (the ‘Webasto’) worked, showers would be a far more frequent occurrence. But it has been dead for over eight months – so in order to shower we have to heat up a big pot of water, pour it into a bucket that has already been filled with cold water, whack the 12volt shower pump into the bucket and then do the maximum scrubbing in the minimum amount of time.

My approach is to wash my hair over the sink first (there seems to be no shampoo on the boat so I use whatever soap is about) and then rinse and leave the conditioner in. Start the shower, wet myself down, turn it off (being careful not to wet the non-waterproof switch) try and scrub everywhere and then turn the water back on (set to ‘low flow) and shower for a few minutes and rinse my hair. It’s possible to really string out that bucket of water!

I did that. Then I showered Small DB (no hair washing for Smalls – too hard) with a second pot of water – heated a third, and showered Small Z. It’s easiest if I am there to help and be in charge of the switch – I have taught them to be frugal with the water and scrub with the shower off too.

Ordinarily (if we were in the wilderness somewhere) there is no way we would embark on the showering – but having a tap in the park at the end of the jetty means that filling up our water tank is a no-brainer. 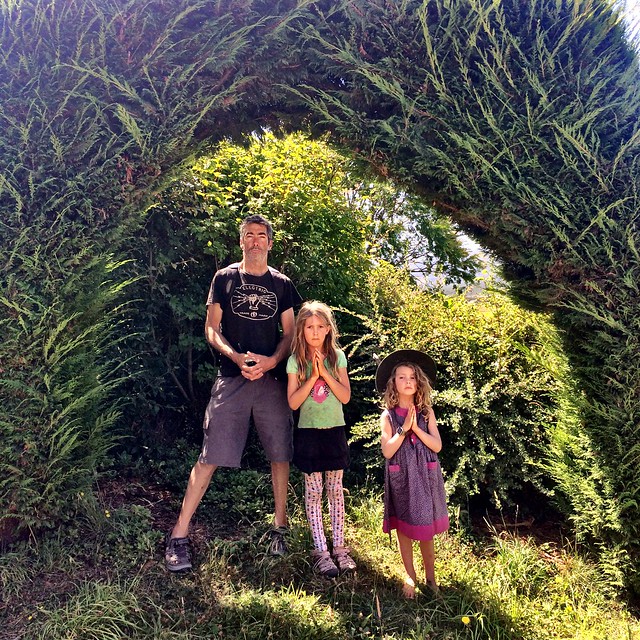 Eventually we had cleanliness… Revalatory! After lunch we set out On A Walk. M and I have been itching to go exploring in the hills – it wasn’t an ideal time to embark on this, because it was quite hot, but we took water and hats and set off regardless. Get this… we walked ALL the way up Old Street and then around and down New Street. Like a long narrow horseshoe. 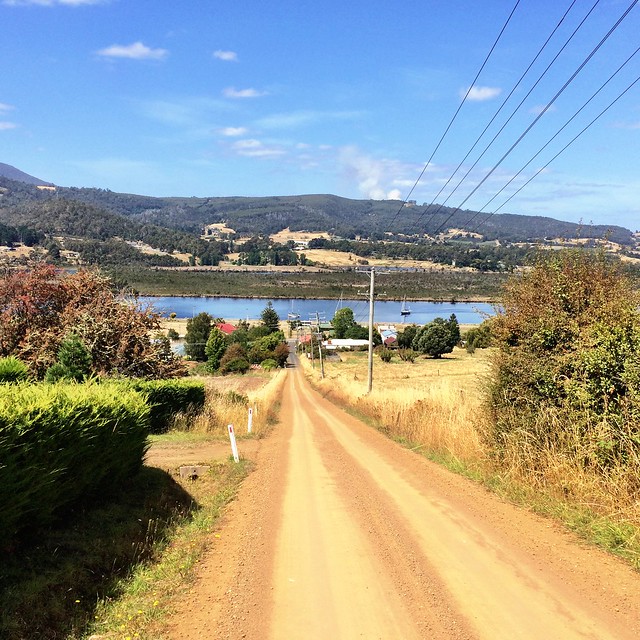 The views from up on the hill are just sweepingly beautiful. The hill swoops down to the town, where it flattens out and takes in the wide brown Huon River and does the same thing – in reverse – on the other side. We passed feral apple trees, a nectarine tree overhanging a fence and mounds of roadside blackberry plants.

“Can we eat the blackberries?”

“No. They’re alongside the road. They’re probably sprayed.”

Three and a half minutes later….

“Can we eat these blackberries?”

“They’re alongside the road, so they’ve probably been sprayed.”

“What about these blackberries? Can we eat those ones?”

“Are they NEAR THE ROAD? They HAVE. BEEN. SPRAYED.”

About two thirds into our walk we found a fast running creek with a small bridge over it – there were blackberries surrounding the creek that were not near the road, so we lifted the blackberry ban. Yum. 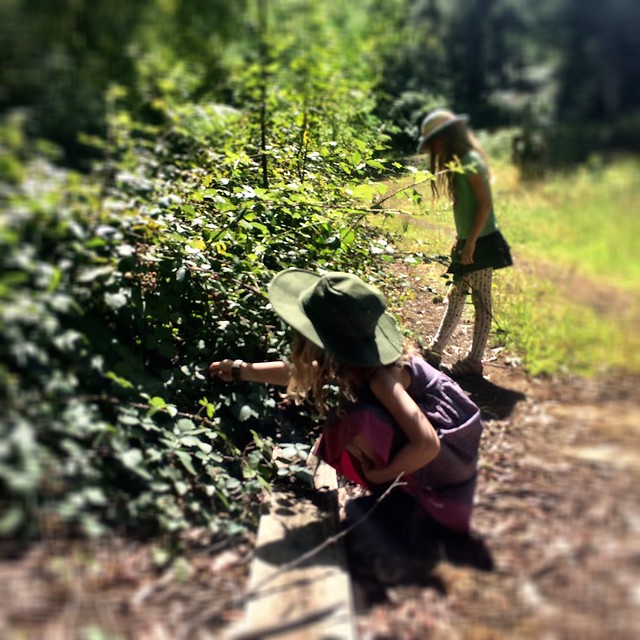 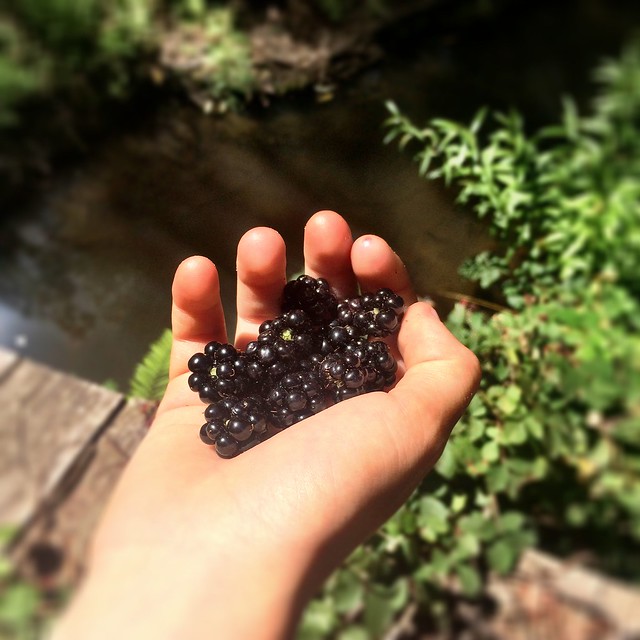 Back at the main road, we crossed over to a shed where wood handicrafts are made and sold. They had a box of wood scraps that included bits of huon pine, eucalyptus, blackwood… all ranging in between one dollar and twenty dollars. I had intentionally not brought any money on our walk…but the Smalls were whimpering for a bit of wood each. We all hanker after beautiful Huon pine.

The night before, as the Smalls had jumped on their friend Rory’s trampoline, M and I had gone for a quick walk. Alone. ALONE. We had walked along the river to where there are several boatbuilding sheds, including ‘The Wooden Boat Centre‘ – and seen a few piles of wood offcuts. 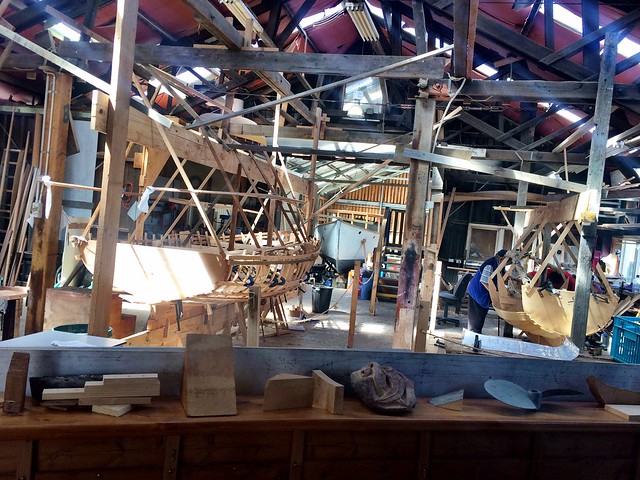 We took the Smalls back there, and as they and I started poking about looking for bits that might be Huon pine. A woman who was passing helped us. M went on to the pier and began chatting to a guy there who was making little decorative wooden boats.

He was a very helpful man – not only did he identify all the little odds and ends we showed him (celery top, myrtle, radiata pine, Huon pine…) he let us rummage for bits of wood in the back of his ute AND took a small plank of Huon pine into the boat centre and cut me a bit of it. WOOOOO!

I have dreams of making crochet hooks and Huon pine hearts…

On the way back to Bella Luna we were invited to crew in a rowing race on the river this coming weekend. I felt that it was just another Franklin tentacle pulling us in, and gracefully acquiesced. Back on the boat we drew designs on some of the wood and M cut them out with the jigsaw. We then all spent the next few hours honing and sanding our various creations… 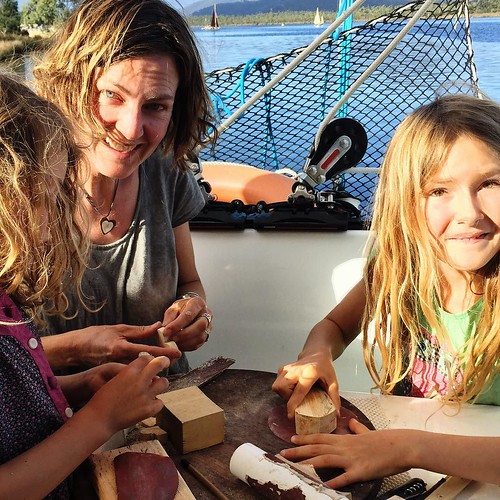 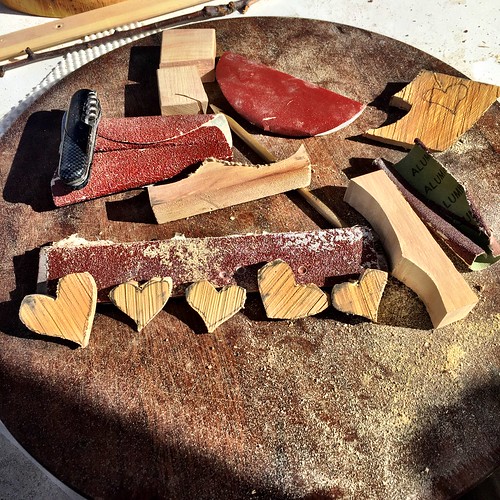 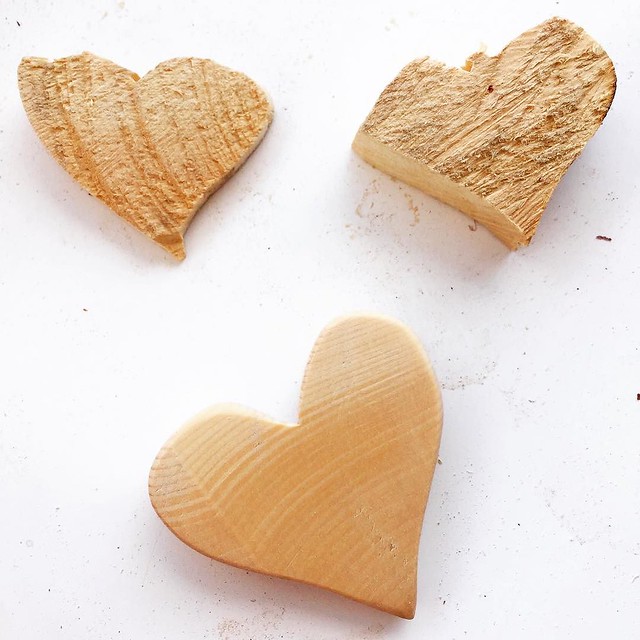