We spent three nights at the Prince of Wales Bay Marina. Although we have idealistic visions of avoiding such places because of the expense, sometimes the facilities available make them impossible to ignore. We were able to get a berth and use power, water, showers and laundry – our stay was primarily to give M the opportunity to install our new autopilot.

We have been repeatedly grateful for the kindness given to us by people in Tasmania. A long lost friend of M’s and her husband left a spare car for us in the marina carpark and then gifted us plums from their garden and a street directory with op-shops and a tip-shop marked in them. AMAZING.

A guy on another boat talked to M about where to get various bits and pieces from and then he offered us his car to go and get what we needed. Without wheels M would not have been able to complete the job, as he discovered he needed to go to quite a few different places to get the bolts, and steel and various other stuff.

Meanwhile, I spent almost eight hours battling with our recalcitrant wifi antenna. Holy shit. I have been trying to get that thing working since the middle of last year. Bear with me as I rant:

The Ubiquiti Bullet M2 Titanium is an antenna on the top of our mast – it’s sole purpose is to pick up wifi signal to occasionally give us free internet. I have been able to make it do this by plugging its network cable into my laptop – but the holy grail that has continually eluded me is the ability to instead plug the network cable into a wifi router – for Two Good Reasons.

1) to avoid using my laptop, which is battery hungry
2) to distribute wifi around the boat for various iPads to lock on to

Somewhere around the Tamar River M left my little Dovado Tiny AC router out in the rain and killed it dead. I was furious for several days. That left me with our HooToo Tripmate Nano wifi router that I have a 2TB hard drive plugged into with a million kids TV shows on it (and magazines, ebooks and films).

On numerous occasions I have tried plugging the Ubiquiti into the Tripmate, to no avail. However – at the marina I was able to power my laptop without fear of a flat battery. I was determined to solve the problem and promised myself I would not sleep until I had done so.

I am slightly geeky, but really not so much. I had read that the antenna and the router had to have different IP address neighbourhoods. I looked up all this shit so many times that whenever I went back to google stuff I would become increasingly disgruntled because it insisted on TELLING me the last time I had visited that page. Dear god.

No doubt this is hilarious to people with a rudimentary knowledge of networking, but I had NO IDEA how to make things work the way I wanted to. So I just sat at the goddamned desk for hours and hours, while M worked on the autopilot and the Smalls ran riot, until finally, at midnight – I got it working. And didn’t say a word. I was connecting the antenna to my own little mobile hotspot and I wanted to try the following morning to connect to the marina wifi.

Once I had the password, the marina wifi worked like a charm. Small DB was enraptured to be able to use her ABC iView for Kids app for the first time ever aboard the boat. I was so happy that I had won the war (the war created by my own tech-ignorance) that nothing bothered me – [/end of rant]

I worked on a new anchor-rope to chain splice… 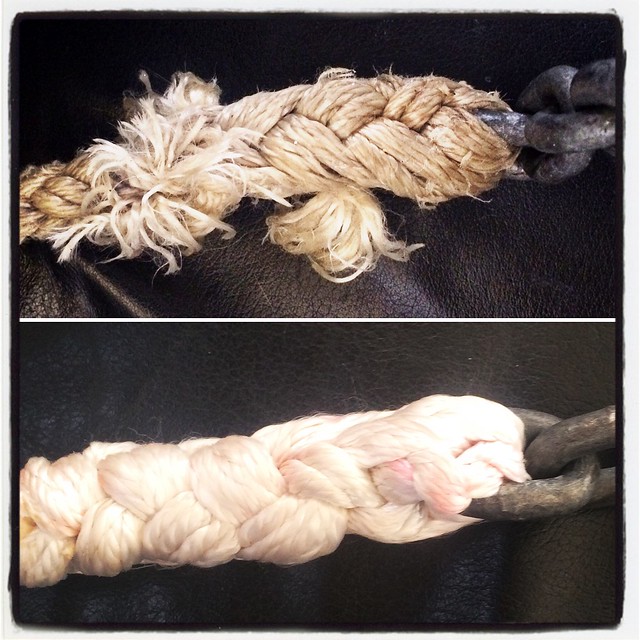 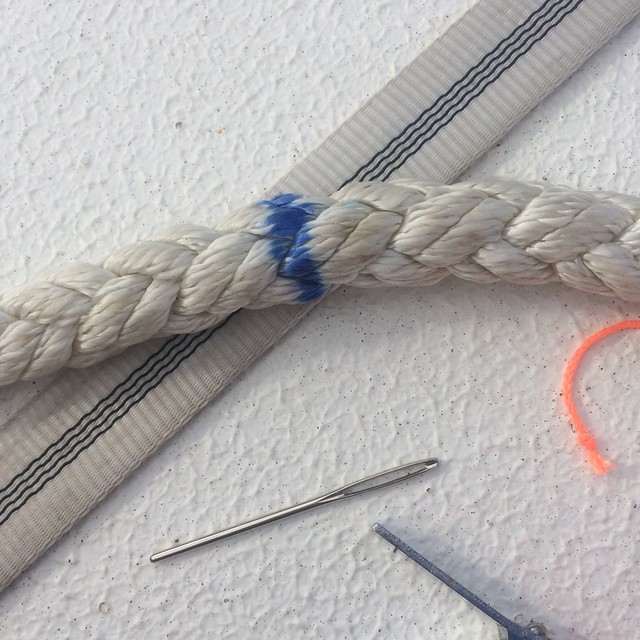 …while M did autopilot work and the Smalls revelled in the newfound fast, free wifi. By the end of the second day there, we realised that we should stay another night and leave with a tidy boat and calm occupants, rather than leaving then and there, still frazzled with stuff everywhere. 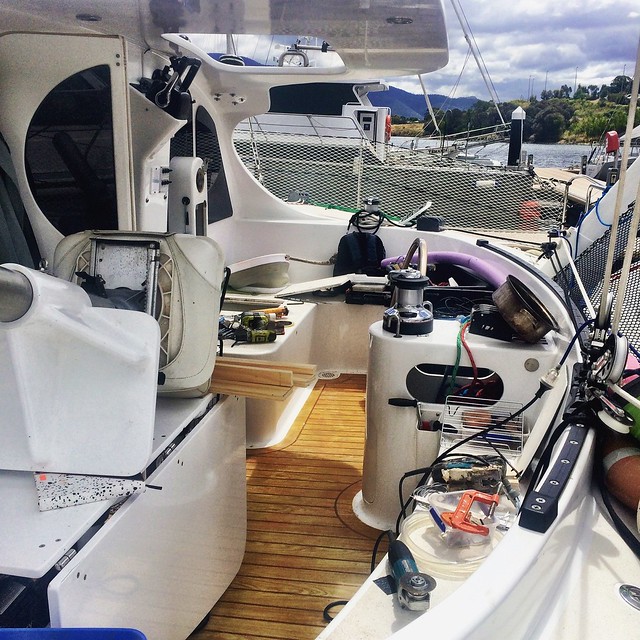 Serendipity smiled on us – the next morning a couple had a boat-garage sale down near the marina cafe. There they had a brand-new, never used, Rutland 913 wind turbine – the exact same model as ours. In addition to this they had a packet of spare blades – and THEY were what we were after. We also got the ‘Cruising Guide to the NSW Coast’ for $2, and felt very happy with ourselves.

We left the marina at about 2pm and motored against the wind down the river. We passed our friend Grant in Apache sailing in the opposite direction. 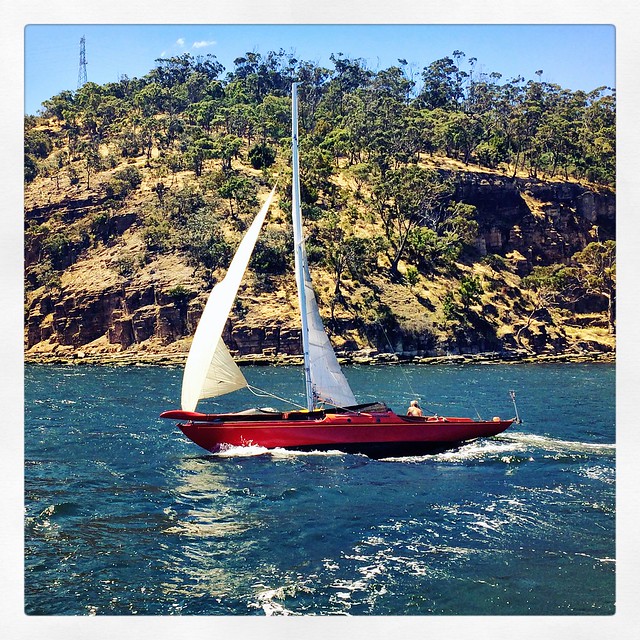 Tying up at the dock in Hobart (for what must be at least the tenth time) was unusually difficult, and I wished for the return of Small Brother as crew. The wind was pushing us away from the dock, and it was a struggle to get the ropes on properly.

However, I felt better about our difficulties about an hour later when two older guys sailed an old steel boat in with no mooring lines ready and no fenders out. It could have been a lot messier than it was without the intervention of M and the woman on her boat opposite us.

There was a great band playing outside the pub up near the Visitors Centre, and M and I drank a gin and water-kefir with mint in the sun after having done due diligence with the lines. It’s good to be back. We intend to head off toward Bruny Island tomorrow after getting more books from the library. There is a big whack of weather brewing that we want to be tucked away from.