Christmas 2016, Bruny Island and the rest

On Christmas morning the Smalls erupted at about 6.30am and went foraging for their stockings. We are very DIY in all aspects, and in the absence of stockings they had used my biggest wooliest socks, both of which had huge bulges in the bottom – mangos!

There were presents from Santa, us, and other family members. The Smalls handed out the gifts and cards they had made and bought. I scored a bottle of Hellfire Gin from Small Brother, and M received his obligatory bottle of red wine with the word ‘chocolate’ in the bottle blurb.

An egg and bacon breakfast with lashings of tea and coffee followed. I blasted Fairytale of New York [note: I have finally realised, since just adding that link, that the song is not;

And the bells of the NYPD choir were singing, beaujolais…

And is in fact;

And the boys of the NYPD choir were singing ‘Galway Bay’…

We waved in a Christmassy fashion at all the other boats – one of whom gifted us a box of marine themed magnetic poetry. The benefit of having woken up early was that it didn’t feel too weird to untie from the dock and sail away.

There wasn’t any other proper opportunity for us to take Small Brother sailing, and we thought it would be nice to drop the anchor somewhere and have Christmas lunch. Opossum Bay was compatible with the weather. We had an awesome lunch of happy ham, cherries, cheese, and finished with some amazing raw cakes that Small Brother had bought at the market the day before. They were sublime.

This is before we plunged into the food. Orange woollen blanket overhead to keep the sun off…

We went ashore, where there was swimming, snoozes in the beach tent, beach-combing and ripple jumping…. 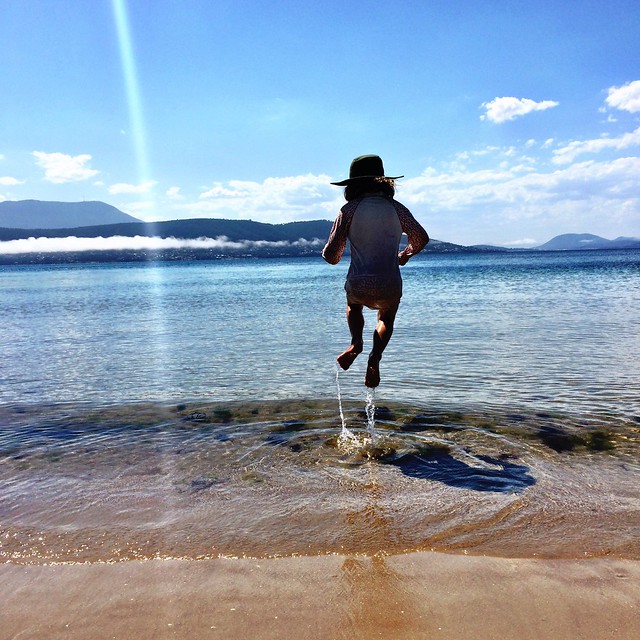 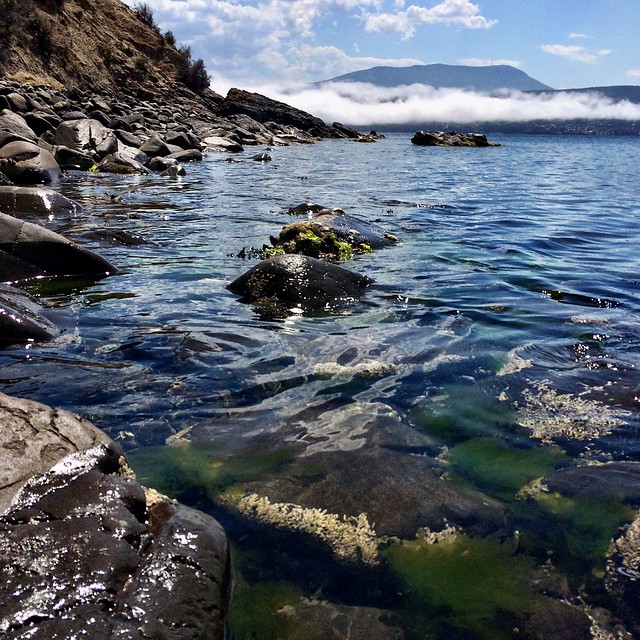 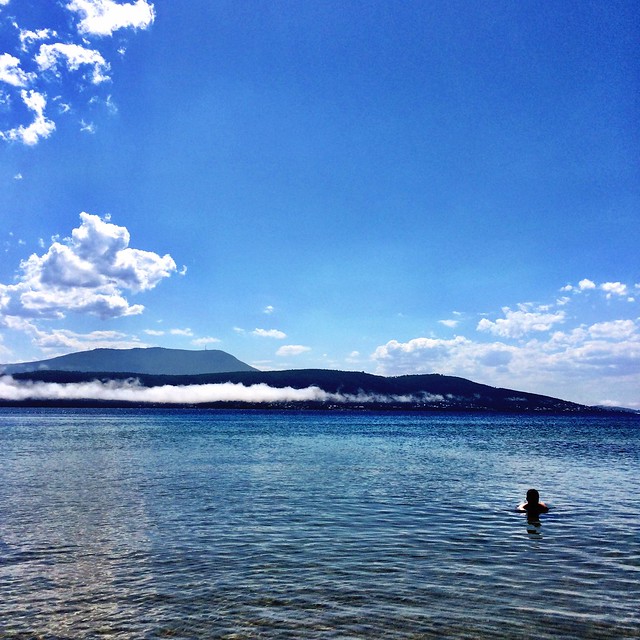 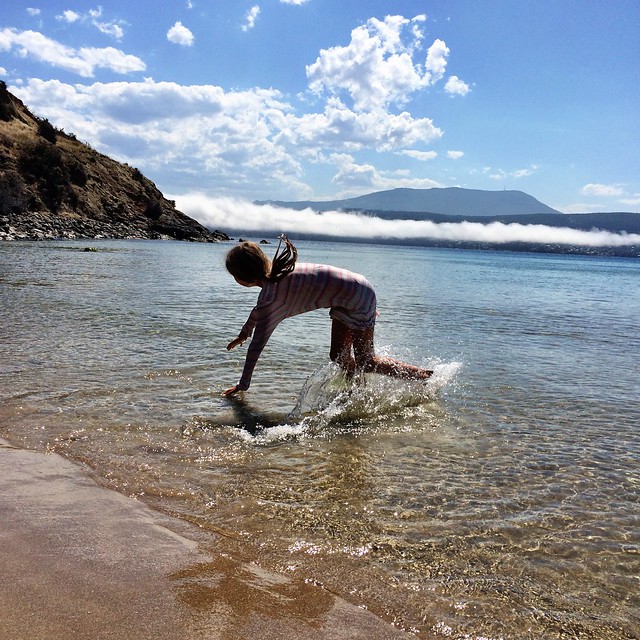 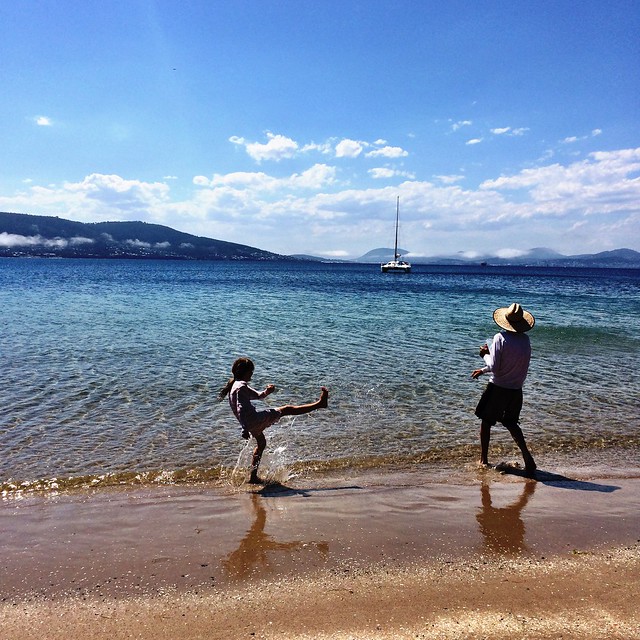 The wind came up during the night and our protected anchorage was no more. M was captainly and motored us around to The Arm, which was much calmer, and then had breakfast. Sometimes I forget he can achieve things without having had coffee.

Boxing Day was a lazy recovery day. We eventually sailed back to the dock in the city and said hello again to all the other boats who had stayed there for Christmas. We ate the fish that M and Small Brother had hauled out of the sea the night before and went to visit the Maritime Museum – where Small DB pretended to be a figurehead…

Day06 For Small Brother’s birthday we took him to Straight Up – my favourite cafe in Hobart. Entirely gluten free, and entirely awesome. His flight out was at lunchtime and I was trying to push away impending sad feelings…

However. Once we had walked back to the boat, and I had told him that it was supposed to be 34 degrees in Melbourne, he adjusted some arrangements and decided to stay on! Jubilation!

We were getting kicked out of the dock because of the Sydney to Hobart race, and so, after a quick gathering of supplies, we sailed away to Bruny Island.

It was a good sail. We anchored in the Duckpond, a spot in Barnes Bay reknown for its watery tranquility. We were joined by eight other boats, but all was serene… Unfortunately the weather gave up at that point. Rain. Rain. Rain. M and SMall Brother went for an after-dinner birthday walk regardless.

Kettering has an amazing pier running the length of its marina which is available to pull up at. It was one of the most hospitable and lovely places to pull up – it operates on an honesty box system. I think it was $5 for three hours, $10 for ten hours and $25 for overnight. This *includes* power and water. Spectacular. 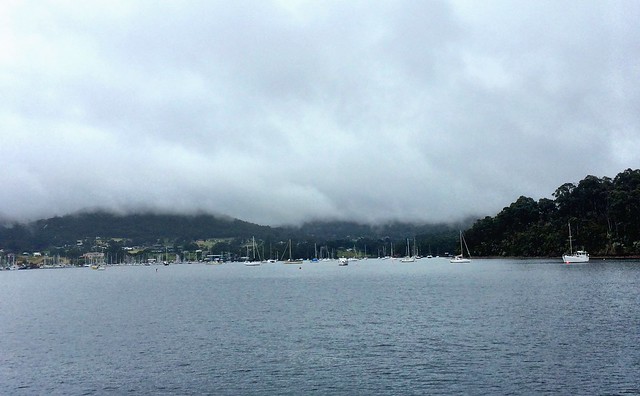 Did I mention that it rained, and rained, and rained? While we finished our soup, a bloke came up to the boat. “Permission to come aboard!” (I use that exclamation mark intentionally – they don’t actually *ask*, it is more of a declamation as they begin removing their shoes.)

“Sorry mate,” said M, who is still learning to be discerning about who he allows on and off his vessel. “We’re in the middle of lunch…kids…” he gestured in a way that took in Kettering at large. Luckily for him, the guy persisted, and M belatedly discovered that they had been in email correspondence a few times while they had both built the same boat.

This culminated in a frenzy of mutual labradoration™ and a lengthy tour of our (by now not so tidy) boat. We then had a tour of his boat and it was super weird to be inside what was essentially the same vessel, but laid out totally differently. It was also depressingly clean.

“Only someone who doesn’t liveaboard could have a boat as clean as this,” I whispered cattily to Small Brother. He, I and Small DB headed for the pub. He had a beer, I had a wine and she had her first ever lime and soda. Her delight knew no bounds. M and Small Z eventually joined us. And still it rained. 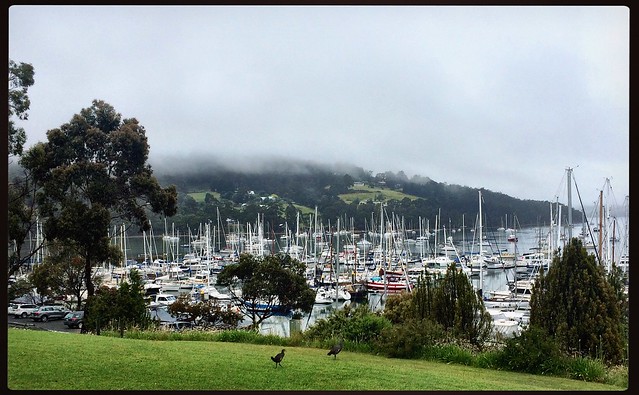 Small DB had her bunny with her, and decided she required a carrot. I told her that we had run out, but she could take $2 and go and see if they would sell her one at the bar…. 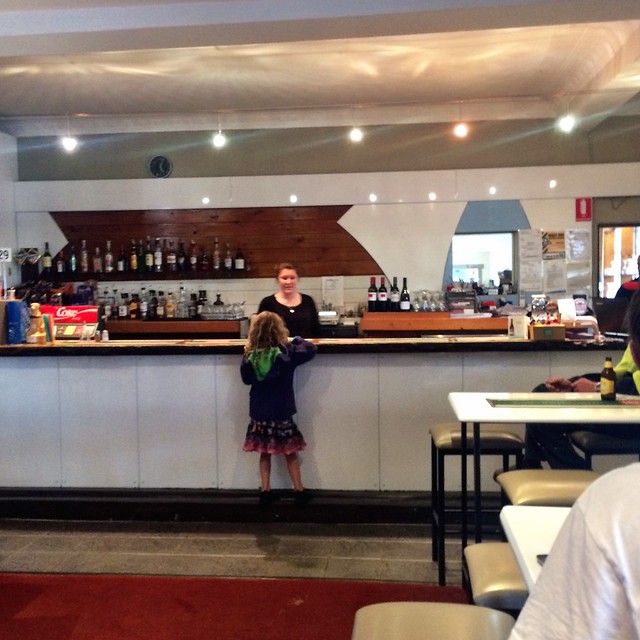 They gave her one 🙂 M heard one of the regulars say, on our way out, “Most kids are all after the lollies, but her parents made her get a carrot.”

We awoke around 5am to head back to Hobart. Everything dripping and covered in mist. Our batteries had been topped up overnight and our honesty box payment had been made. 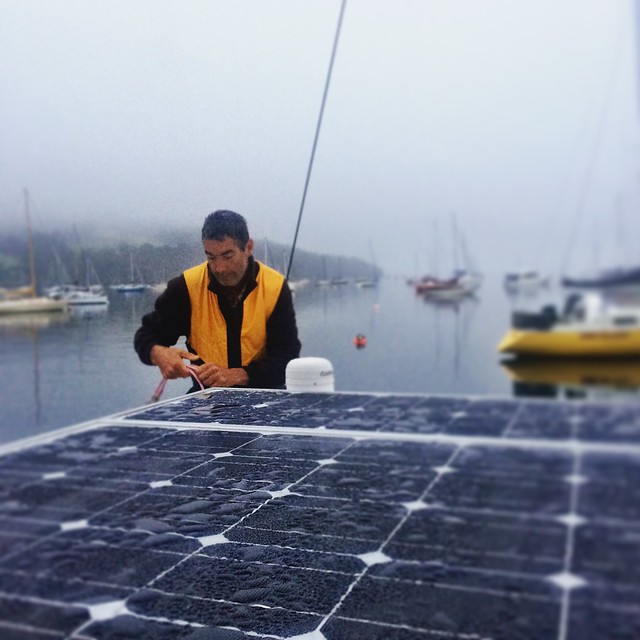 The sail back to Hobart was quick – we were particularly conservative about the time required because Small Brother had to fly to Melbourne at about 1pm.

The early start meant that we got into Hobart at just after 9am – which gave us time to shower and collect the car. The yacht club had very kindly said we could use a mooring for the day, which helped us out a lot. We drove into the city and went to look at the yachts that were the frontrunners in the Sydney to Hobart race. They were like Hagrid – too big to be allowed.

We spoke later to someone who had been aboard who said that all the money and the tech goes into the boat – there are basically hammocks for beds, a one burner camping stove and no loo! The opposite of my requirements – I like our boat being like a floating caravan with comfy beds, a glut of tinned food and mostly reliable wifi. I have no desire to race on a maxi yacht.

We said goodbye to Small Brother and, as usual, it sucked. I don’t know when we will see him again 🙁 I did ask him to crew with us if we head to New Zealand… I moped around the city, trying to console myself with the purchase of more microfibre tea-towels (they dry super quick and were half price – three for four dollars!).

The Taste of Tasmania festival had started and we frollicked with the Smalls in the kid section. We had thought that there would be a lot of ‘tasting’ of Tasmania produce…but we were wrong. It was all about selling Tasmanian produce, which was fair enough, but… our cruising budget had already been blown to hell by Christmas.

The Smalls had a great time – they were introduced to orienteering and were so enthused that they did every single level. Small DB excelled – so we are going to investigate further – geocaching etc.

I was exhausted from our early start, but just outside the yacht club we ran into a couple we had met a week before – catamaran enthusiasts and circumnavigators. Their daughter, son-in-law and grandkids also materialised and we went back to their boat for a much needed G&T – the Smalls all bonded immediately and were left to play in the park. HEAVENLY.