How good is it having someone fly in for Christmas!? ? Small Brother – who I haven’t set eyes on for 18 months (18 rather traumatic and crazy months) arrived from NYC before Christmas, hung with the Mothership for a bit and then turned up here – in Hobart – on Thursday.

M went to fetch him from the shore in the dinghy, and the weather (which had been perfect until that point) kicked in. As he boarded the boat (clutching bags, booze and computer case), the sea bashed the dinghy about and I barely greeted him. I had warmed up the motors.

“You’ve got the motors running?”

“Yep. This is gross. We’re getting out of here.”

It was good to have some extra muscle to help with extricating ourselves from the mooring – we motored back into the city – crossing paths with Even Keels, another catamaran we have become acquainted with. Serendipitously, they had just left the very position at the dock that we covet. The wind was too strong for us to dock properly, so we pulled up opposite where we wanted to be and worked some rope tricks to haul Bella Luna around to where we wanted her.

THANK GOD WE DID!! Over the following hour or two, every boat and their dog pulled in. We had nabbed the primo spot, purely by chance. We were sheltered and two minutes walk away from Salamanca. Our local informant had told us that on Christmas Day last year, there had been one other boat present. Not this time.

The sun shone…we took Small Brother for a wander and he and M had a coffee.

DAY01: we all hauled our butts out of bed at 7am and walked up Elizabeth Street. Small Brother – newly arrived, malleable and uncaffienated, had agreed to come with us to the Cat Cafe – a place that the Smalls and had rhapsodised about. A place where 12 or so cats wander freely, bestowing themselves on chosen laps and purring at random. 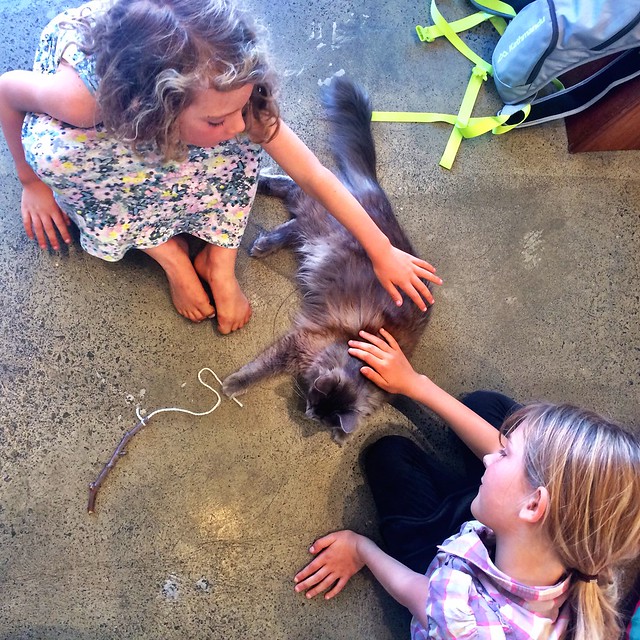 We’d booked the 8am half-price session. Woo! Oh – such joy! Super-coeliac friendly, with bread from our favourite place There was a room where you could eat cat-free, or you were able to take your breakfast into the cat room if you chose.

The Smalls were transported…particularly while we were the only ones there – although Small Z did tell me later that she wanted to return there for a session in the late afternoon when the cats are sleepier and not so buzzed. 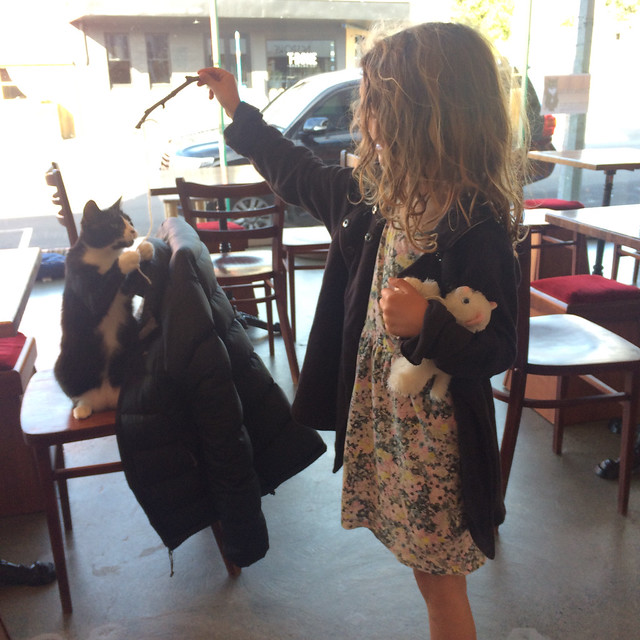 There are walkways going up one wall, cat toys, cat books, paper and and pens for doing your own cat drawings… We must have stayed for almost three hours. It was excellent.

Small Brother went back to the boat to take in some sunshine (there’s not a lot of that in NYC at present), M took the Smalls to the library and I went out solo on Christmas errands, happy as a clam.

Hobart was abuzz. The Smalls Christmas excitement was almost at fever pitch. Small DB has been asking daily, for at least six weeks, “How many days until Christmas now? The fact that it was only two more days was blowing her six-year-old mind.

DAY02: the joy of alternative transportation accompanied Small Brother in the shape of his rental car. I suspect he thought he would get more use out of it than he did – in any event, it was a total novelty to be driven around a bit. We journeyed to the top of Mt Wellington. At the boat, there was a strong seabreeze – we assumed that at the top of the mountain it would be blowing an arctic gale. Never assume. There was NO breeze at the top of the mountain – the day was clear and we could see down to where we had been moored on Sandy Bay – that seabreeze was still kicking up the waves….