The weather kept us on a mooring* at Port Arthur for three or four days. The absence of any shops and petrol stations meant that we were frugal with the stove – each time we boiled the kettle we also filled the thermos with boiling water – and were slowly eating our way through the last bits of food on the boat.

By the final night we were eating brown rice with tinned corn fried in garlic. Very minimalist. Being on the mooring, while initially a novelty, has worn off. As the boat moves around in the night, the mooring inevitably whacks her – M and I have not had any good we-are-tied-to-a-mooring sleeps.

(However, the mooring was useful as we sheltered from the 40 knot wind that hammered through on Wednesday – we figured a large block of concrete was less likely to drag than the anchor. It was the strongest wind we had encountered since e being on our journey – M took a picture of the weather map…)

Friday morning M had us heading out of (what I again belatedly realised was a very protected) anchorage and into the ocean. It was choppy and revolting for a few hours until we were able to change direction. Poor Small DB got out of her bunk, came into the cockpit and motioned urgently for a bucket – and started her day with reverse-breakfast ?

Inevitably M does not adhere to the three-hours-on-three-hours-off rule. He steered the boat for about six hours. I took over and he slept, but only for an hour. The scenery was dramatic – as were the conditions as we squeaked around Cape Raoul.

There were tour boats nearby, zipping around the base of the cliffs so people could check out caves and a seal colony. 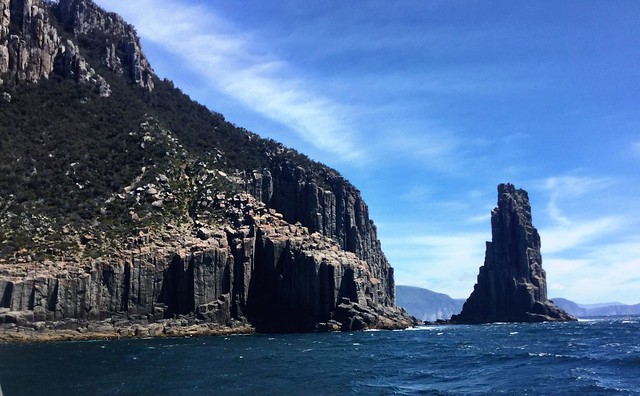 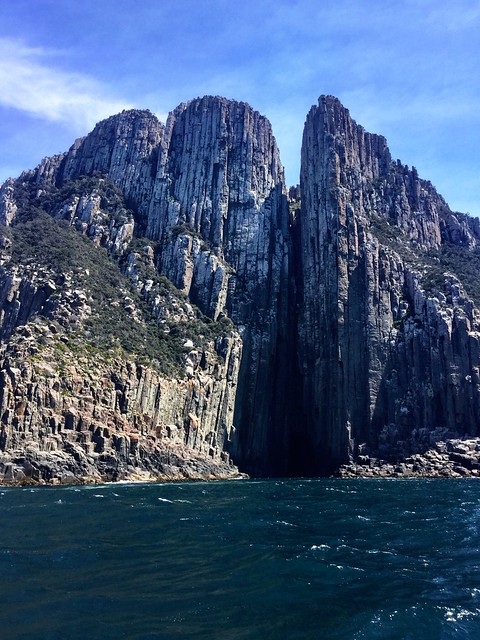 We sailed across Stormy Bay and saw Iron Pot Lighthouse – Tasmania’s oldest one – at the entrance to the Derwent River – it was exciting to be getting so close to the city, although the river mouth is so wide it was difficult, for a while, to differentiate it from the bay. 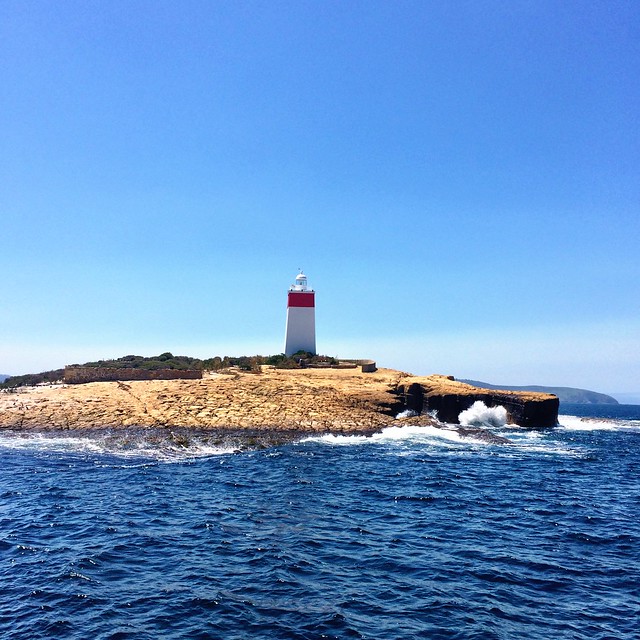 Sailing past crazy cliffs and seal colonies is thrilling, but sailing past civilisation is almost as good. We love to see where people have built their houses, check out little bays for anchoring potential and see all the infrastructure gradually increase as we get closer to towns – or, as in this case, the capital city!

We clocked Little Sandy Bay as a good place to stay as we went by. M radioed into the port of Hobart about going into Constitution Dock for a few days, but as it was nearly 3pm we were instructed to pull up at a public berth** and stay there over night.

It always feels a bit dicey when you’re among many other boats in a place you haven’t been before. It’s not like there are street signs showing you where to go! All along the waterfront of Hobart proper are different marinas and we had no idea where the one was that had the spot that we had been told to go to.

M turned in to the first one we came to, fully prepared to then turn around and go back out. Manoeuvring an 11m catamaran close to other boats is not for the faint hearted – and it was pretty windy, which didn’t help. We saw an empty berth ahead of us and decided to chance it.

M and I have become a lot more practices and berthing the boat – he does all the motoring and steering wizardry (which I am glad about, because I would much rather he crash Bella Luna than me) and I do the monkeying about with the ropes – jumping off and securing us.

Once we were sorted, we realised we had arrived right at the berth that we’d been told to use – HUZZAH! It feels so fantastic to be in HOBART!! One of my favourite, favourite cities!! The first person we met, Guy, was on a boat a few metres away – he is a sailing gypsy and lives on his boat, which looks very eccentric and is festooned with two kayaks and a bicycle. He has no motor (instant cred) and is a font of information about where to stay for free, where there are showers and what was going on.

Our first destination was the supermarket to grab a few things in order to expand our culinary experience outside brown rice and tinned corn. Then the post office, where we picked up some mail from the mainland (that was accompanied by a happy I-am-an-authentic-traveller feeling) – and we stopped to take a Christmas picture of the Smalls… 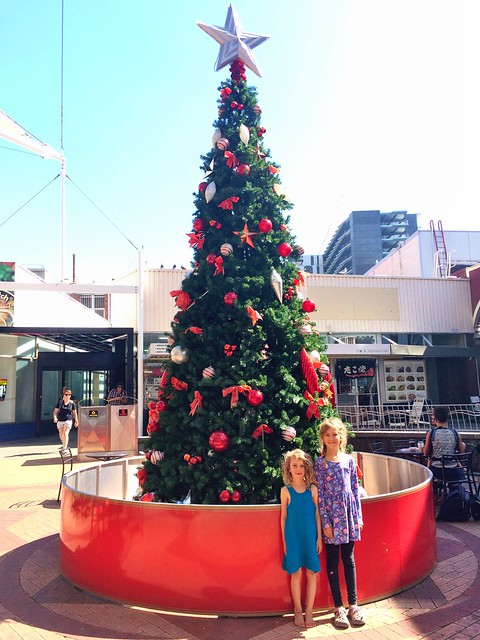 Of course, when you shop for things you have been desperately craving (TEA! MILK! CHEESE!) it’s a given that you have no idea what to cook for dinner because you neglected to get any actual dinner-food. Tomato and cheese toasties won the day – the Smalls were so excited to have bread in their lives, that it was quite celebratory! 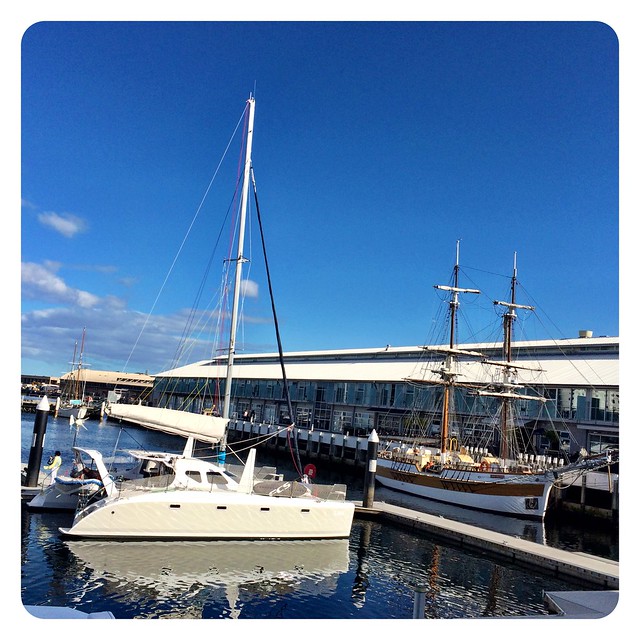 We headed over to Salamanca where Guy had told us there would be a free band playing. The evening was warm and the place was abuzz with people having after-work drinks and dinner out on the street. We saw lots of very dressed up people going to Christmas parties….

The band was too loud for the Smalls – but we were right near one of their favourite Hobart places. the fairy shop. Kill me now. A shop full of fairy stuff – tiny $4 bottles of glitter and boundless overpriced plasticky crap – kid bait. Thank god there is a good secondhand bookshop right nearby.

M stayed where the band was, chatting with Guy and having his first beer in Tasmania. The Smalls grew fratchy and tired – M and I were toast – so exhausted. We wandered back to the boat and had our best sleep for AGES.

________________
*Mooring – a big block of concrete at the bottom of the sea with a floaty on a rope above it. You can tie your boat to the floaty instead of anchoring. There are about 14 public moorings that are free to use around Tasmania.

**A spot at a pier or marina where it’s free to tie up for a few hours, or – if it’s late in the day, stay overnight