M had us underway around 6am – Small DB, becoming more and more of a night owl, slept steadfastly through the throbbing of the motors close to her head. Small Z came and snuggled in with me. There is a rather impressive storm predicted for Friday and we are keen to be tucked away from it – looking at the charts and reading our bible (lent to us by a friendly man called Ross in Gravelly Beach), it seems that Canoe Bay would be perfect.

I had brown rice left over from last night, so fried up small chunks of apple, added in the rice, some milk, heated it all up, threw some rhubarb and yoghurt on top and called it breakfast. The Smalls ate in bed and stayed there – sailing days are their free pass – we don’t care what they do as long as they stay calm, fed and happy. The one rule is that if they start to feel sick, they need to come up on deck and steer. 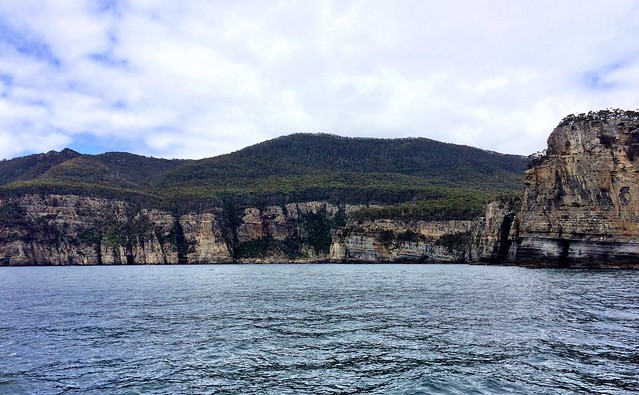 We sailed along the coast of Tasmania. It really looks as if it was shoved up out of the bottom of the sea by a giant in a temper. I saw cliffs rearing up – straight vertical lines out of the water like a cross-sectioned layer cake in graduating shades of chocolate, coffee and cream. 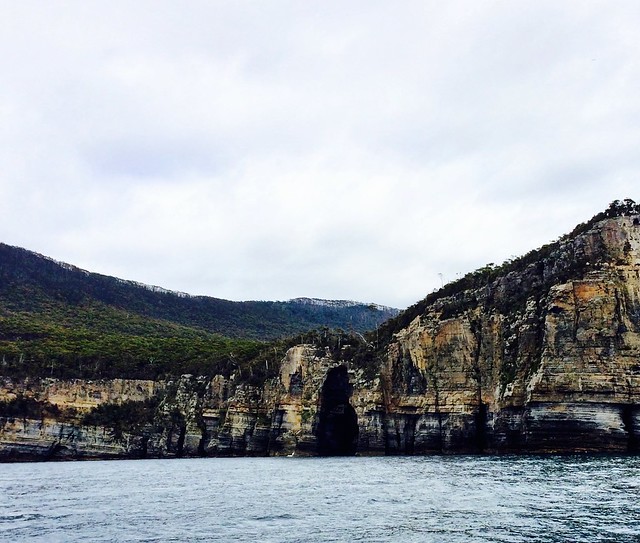 As we got nearer to our destination, the cliffs remained but their content altered. They were no longer horizontal but vertical – savage and jagged instead of layered gradients. They looked volcanic.

It was strange, sailing along the coastline, feeling quite remote, and having texts from the mothership pop through on my phone asking questions about Christmas cards. When I tried to send a message back, I’d lost coverage. We dipped toward the cliffs as we sailed past Waterfall Bay and looked vainly for the waterfall, but there didn’t seem to be one.

We rounded the corner into Fortescue Bay, at the top of which is Canoe Bay – our destination – around midday. Sixty five nautical miles in six hours – it felt like we had made good time. We motored down, down, down through the bay to an extra little bay that seemed tacked on to the end. It was so remote…and then a motor boat zipped past… and then we looked ashore and saw some people snorkling …and then about 30 hikers galumphed their way past. It was hysterical…

We are in the middle of a national park that is known for its walking tracks, so it shouldn’t have been a surprise. Canoe Bay is just sublime. I am typing in the cockpit with she shore quite close by on three sides – the fourth side is open toward the bigger bay which in turn leads out to the Tasman Sea.

It’s called a bay – but is the size of a large dam. The shore is lined with a metre wide ribbon of small rocks that give way to bushes and eucalypts behind which, presumably, are the walking tracks. The gum trees streak skyward, sixty or seventy feet – and we are so close that if one fell, the top of it might almost reach us.

With the trees so close to the shore, there are birdcalls aplenty – we had bellbirds calling on arrival – and I’m guessing we may have kookaburras on dusk. Bella Luna is tucked right at the back of the bay behind the wreck of a boat that was put in place during the 1950s to add some protection for sheltering vessels. I’m not sure it’s still performing that duty – it has deteriorated to the point of looking like an elongated, mostly submerged, rusted out combine harvester.

The weather is predicted to turn sometime tomorrow, by which time we need to stow away anything that might blow away – winds are possibly going to be up to 40 knots – bigger than any we have encountered thus far. Conditions are so serene right now that it hardly seems possible.