Small DB and I went for a crystalline early morning walk around Triabunna, her in her PJs and dancing bare feet. It was a Monday morning, November 28th. The further we walked, the more entranced I became. It’s a little tiny town with what seems like one of everything.

A little supermarket, petrol station, a butcher, a chemist, real estate agent and op-shop. Op-shop. Small DB and I went over and pressed our faces to the window. It looked like a good one. I was all ready to lament – everybody knows op-shops are always closed on Mondays…

Not in Triabunna!! When we came back, a few hours later, both Smalls ended up walking out in entirely new ensembles than those they had worn on entering. I had done a quick and stealthy declutter of the boat and handed over a very full bag of stuff that was no longer required. 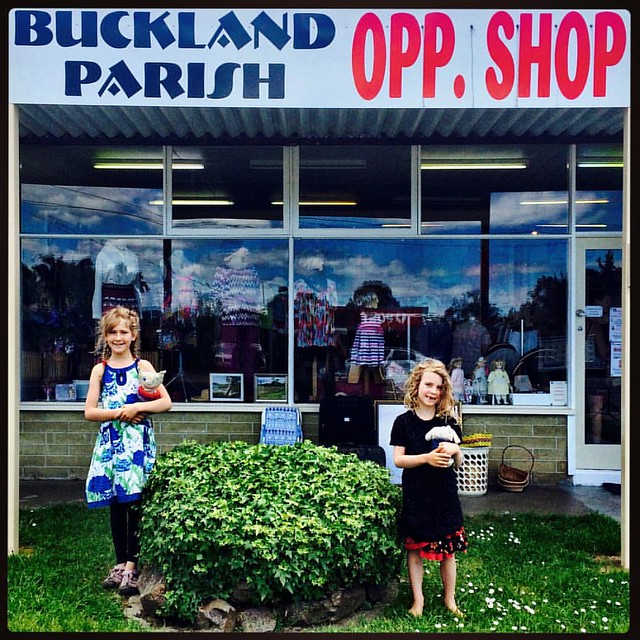 We did a supermarket shop and were able to take the trolley to the boat, unload, and then return it. Bacon, silverside and some roo sausages were purchased at the butcher. We paid Stan, the harbourmaster, our $30. Our lunch, after our shop, felt wholly decadent.

Triabunna is set up to be a fantastic place for caravanners – the vacant block opposite the pub and next door to the butchers was studded with motorhomes – the visitor’s centre was welcoming (and had hot showers – although they were about a dollar a minute – I warmed up pots of water and Small Z and I showered aboard the boat – her first shower since leaving Victoria…) and there were BBQ facilities, a coffee van… and helpful street signs…. 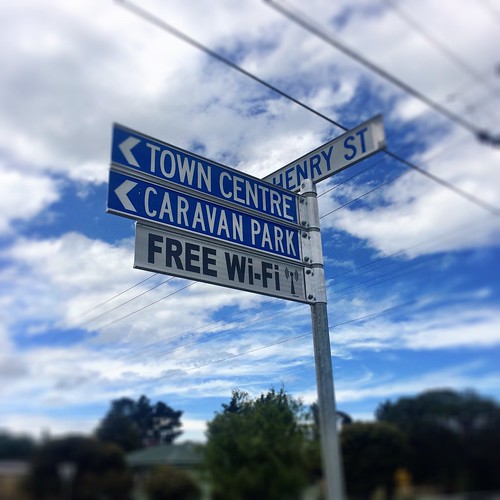 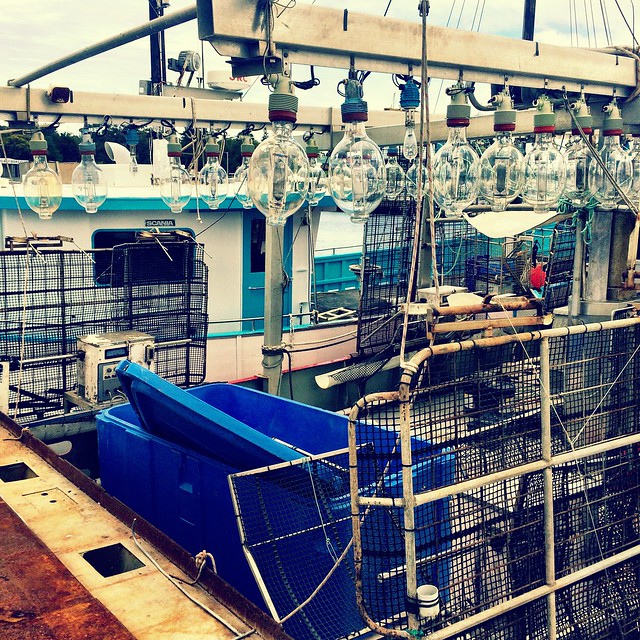 We sailed over to Orford in the afternoon and, for the first time ever, tied on to a public mooring. A little tricky. We went for a walk the following morning – Orford was like a ghost town along the beachfront – presumably many of the houses are holiday-houses. But the playground….! In addition to the normal climbing frame, swings and slides, there was a section with streets, round-a-bouts and working traffic lights! The Smalls, who had brought their scooters, were in heaven….

Small Z was thrilled to discover our secret intention behind going to Orford – it has a library! A tiny library, but still… We lugged ipads and the laptop there, only to find that there was no library wifi – but we were able to borrow books, which was excellent…. 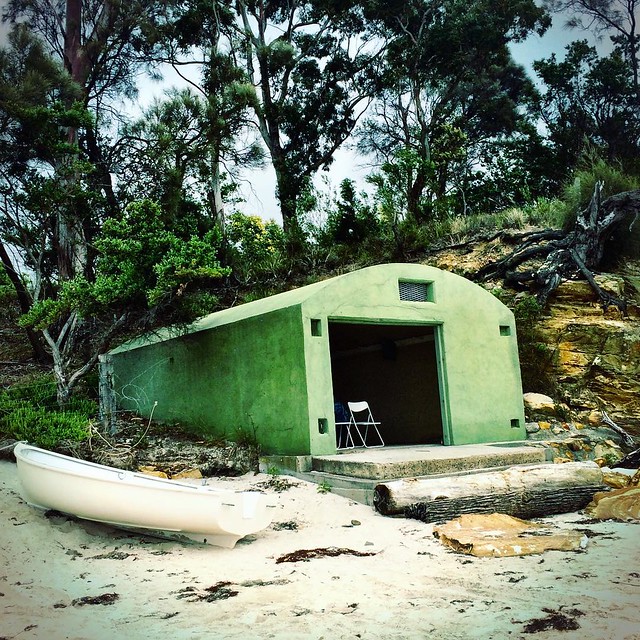 The next day we returned to the library via a little stall with an honesty box out the front of their house – there were raspberries, broadbeans, spuds, eggs and an enormous bunch of rhubarb. GLORY! We scooted down to the shop to get change of a twenty dollar note – but when we got back, the eggs and rhubarb were gone. So disappointed! So disappointed in fact, that I knocked on the door to see if they might have any secret rhubarb hanging about, but they didn’t. Woe. WOE.

On the way back down the main road we passed the little primary school. Small Z told me later that the kids yelled out at her and Small DB.

“What did you do?” I asked her. “Did you scream, “HOW’S LIFE INSIDE THE MACHINE?” or “WHAT’S IT LIKE BEING WITHIN A SYSTEM CREATED IN RESPONSE TO THE INDUSTRIAL REVOLUTION AND NOW PERPETUATED BECAUSE IT’S EASIER TO REMAIN STATIC THAN INNOVATE TO REFLECT CURRENT SOCIETY AND SCIENCE?””

“No,” she said. “I just stuck out my tongue and kept scooting…”

We consoled ourselves at the cafe, where there WAS wifi, although it plodded along. It seemed that everyone who did populate Orford had lunch there on Tuesdays – we got a few glances with our bags of shopping, iPads and laptop, all gathered around a cappuchino and two fuzzy milks.

The cafe looks out on to a lagoon kind of thing, where the Prosser River meets the sea. The entrance to the river has silted up and getting access in a boat is tricky. I had a brief dream of nursing Bella Luna over the bar and sitting at anchor in the middle of the lagoon siphoning the plodding wifi and watching the world go by. 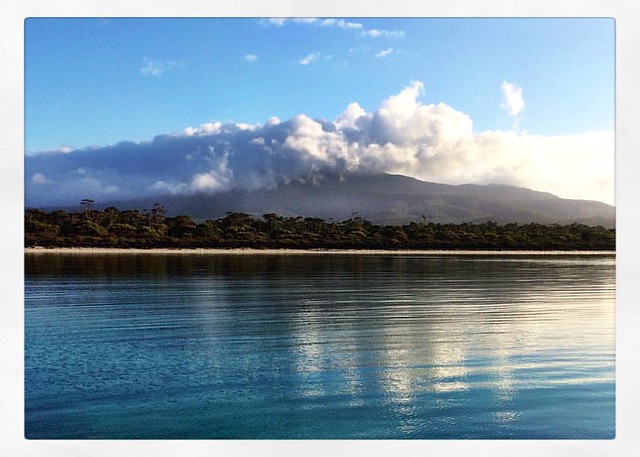 M (I suspect testing his solo sailing capabilities should I be swept overboard and gone) awoke at about 5am on 1 December 2016 – the first day of summer – released us from the mooring and sailed us over to Chinaman’s Bay on Maria Island. We arrived around 9am. The day was gloomy. M was exasperated with our inactivity, but the Smalls and I wanted to stay aboard – to abstain from exploring for the day. I delivered M to the beach so he could go on a lonely bloke-walk to look at convict ruins and wombats and the Smalls and I spent the day being leisurely. It was lovely.

On the second day of summer, we moved Bella Luna around the bay to the isthmus – there was a helpful gap in between the trees that seemed to indicate the narrowest point. M, somewhat overly-optimistically, brought the surfboards and we walked the 200 metres or so from our bay over to the surf beach.

The Smalls immediately wanted to surf, and both M and I made parental errors – whacking them on a board each and helping them catch waves (lying down on the boards). Both of them fell off, were dunked, and cried. M happily caught some waves and emerged from the water like a happy shaggy dog.

We did some calming shell collecting…and the afternoon culminated in the Smalls prancing in the waves as the tide went out and conditions became a bit more gentle. We sailed back to our favoured spot in Chinamans Bay, pleasantly exhausted.

After another super-early solo start on M’s part, we anchored at Darlington – the kind of ‘capital’ or main port – on Maria Island. It was so odd to sail into the bay and see the remains of SO much infrastructure – huge cylindrical towers belonging to an unfortunate attempt at exporting cement in around the 1920s.

There were also ruins of a grand hotel, houses, a kiln… A few of the buildings had been resuscitated/preserved – the visitor’s centre, the coffee palace and the accommodation area… 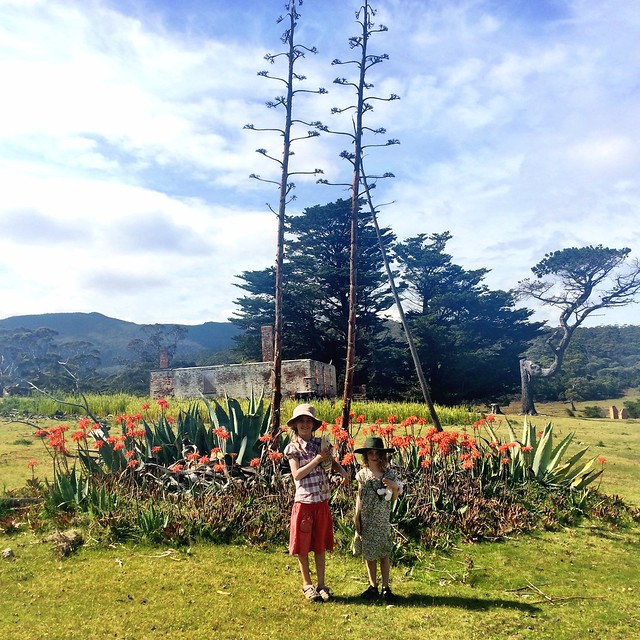 We did a circuit walk to Fossil Beach, where we spent an hour or so looking through the millions of rocks with fossilised shells in them. 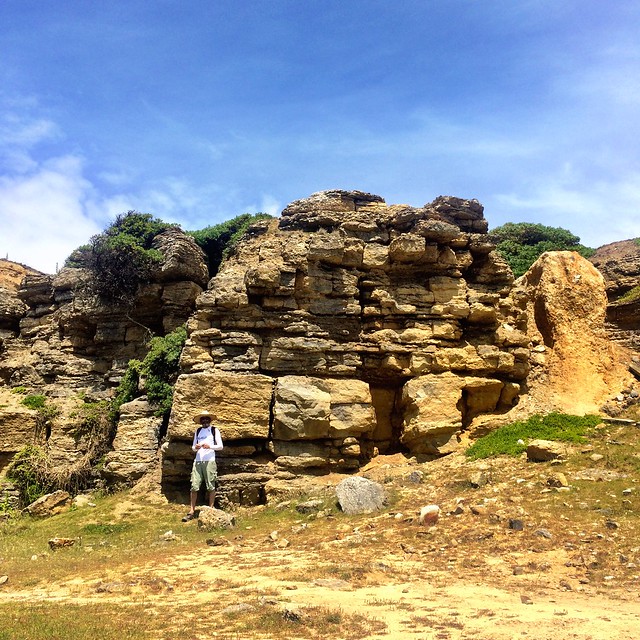 We made our way back to the boat for lunch and ventured out again in the late afternoon for further investigations. The weather forecast only allowed us to have the one day and a night in Darlington, so we tried to take advantage of the time we had there. 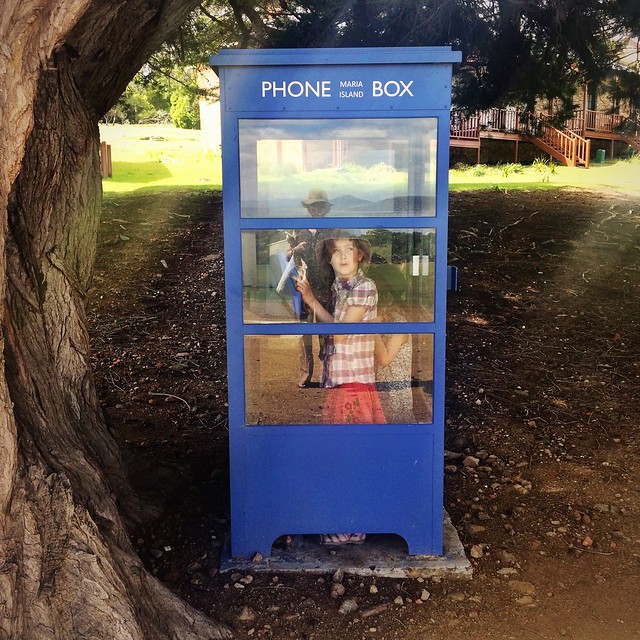 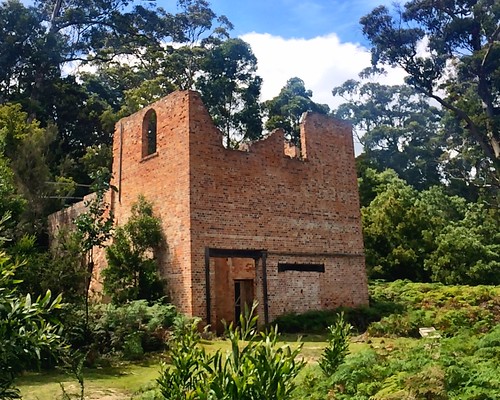 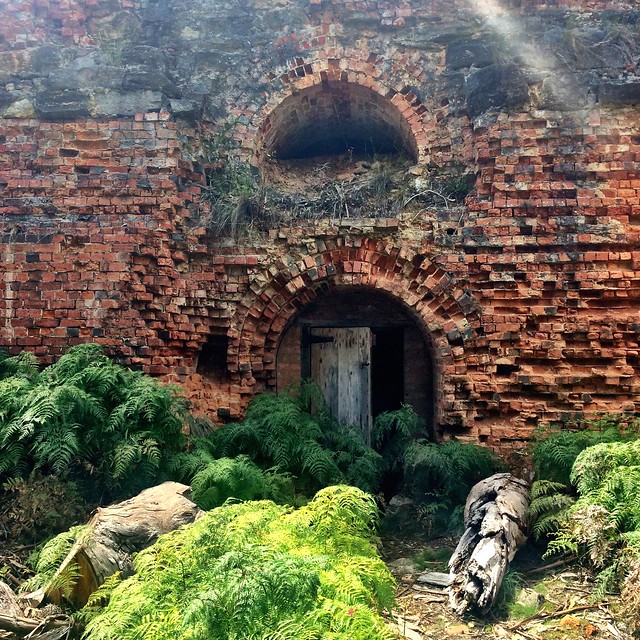 I was so glad we went back ashore – we saw WOMBATS!! Trundles of WOMBATS and most capital-lettery of all WOMBAT BABIES. There were also, not quite as cute, Cape Barren Geese wandering about everywhere, but it was the wombats that thrilled us. They wandered everywhere, both around the accommodation area and near the shore. 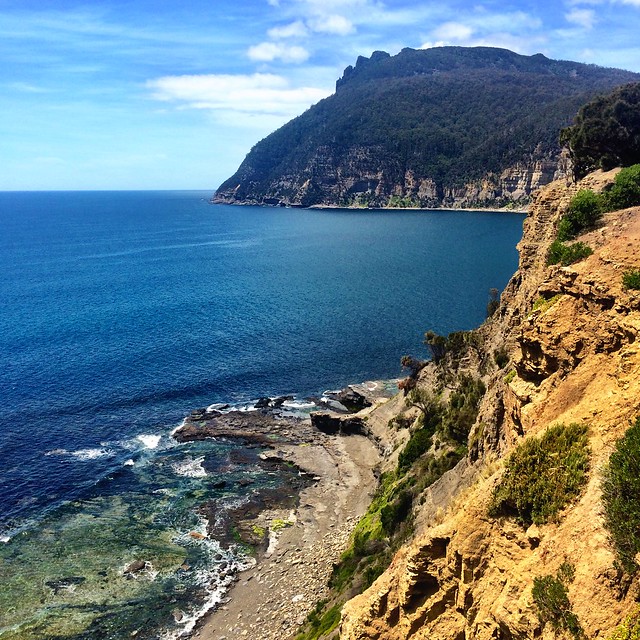 Maria Island is more like a big park than a tangle of bush – the land has been used in the past for sheep grazing, but now its large expanses of grass are munched by kangaroos, wallabies and wombats. We walked up to explore an abandoned hut and investigated the lean-to which still had newspapers from around 1930 or so stuck to the walls and ceiling…

We beachcombed our way back to Bella Luna – a beautiful sunshiney evening. We were all exhausted, and our plans to return and look at the old coffee palace at 8.30am the following morning were abandoned – we sailed back to Chinamans Bay at about 9am in order to be sheltered from the predicted wind.

We don’t have a wind meter, but it blew h-a-r-d through the night. M had put out a second anchor so we didn’t have to worry about dragging. The morning dawned super-sunshiney and we fanged our way across Mercury Passage – initially intending to go back to Orford – but deciding halfway to make contact with Stan – the harbourmaster at Triabunna – to see if we could pull in for the afternoon free of charge in order to do some shopping.

It was a little dicey heading up the channel to Triabunna – we pulled the sails down and motored, but even so, one of our centreboards hit the bottom – eeep! I was so glad it wasn’t me at the helm… We re-explored Triabunna – bought M some shorts at the op-shop, filled up our water tanks and had a nap…

For some reason, there are no spots to tie up in Triabunna that don’t cost money. In almost all of the other little towns we have visited so far, there are pontoons where you can stay for a few hours, or overnight if you arrive in the evening. The Spring Bay Boat Club didn’t want to know us – so, in order to avoid paying Stan another $30, we set sail for one of the public moorings at Orford.

Oh joy! Just before we left I checked my email and had a VERY welcome message about something that had been worrying M and I for a week. This was followed by a shout up on deck. “DOLPHINS!”

Oh my goodness. Our best dolphin experience yet! A whole pod of them danced around the front of the boat as we sailed toward Orford, chasing each other, splashing us as we jumped up and down shrieking and swimming on their back with their white bellies glowing…

They even stuck around when we had to start the motors, and didn’t leave until we neared our mooring.

“Bye bye dolphins,” sang Small Z, as they arced away, glazed in the afternoon light. “Thank you for your performance. Thank you for visiting us!”

Orford was much better the second time around – – purely because of the weather. In one short week it has become summer. I am hot at night under my woollen doona, and even as I type this at 7.30pm, I’m sitting in the last of the sun wearing a t-shirt.

M went ashore this morning at 9am to get to the stall outside the house where we missed out a week ago. Glory!! He got bunches of rhubarb and three dozen eggs 🙂

In the meantime, Small DB had woken up determined to pursue her dream of becoming a chef and had started making pikelets. Only we have no buckwheat flour left – so there wasn’t a whole lot of nutrition in her pikelets and with jam on top, by the time I got them into Foamy to take them ashore to meet M at the library, we were all hopped up on sugar and a little bit crazed.

It took us an a-g-e to get to the library – and it seemed particularly appropriate that I’m currently reading Wild by Cheryl Strayed – the majority of the book she is wearing a backpack that is way too heavy. Mine was full of library books, water bottles, M’s forgotten coffee and my lifejacket *groan* I think