Wineglass Bay via Passage Beach to Triabunna. A shipwreck and stolen tea.

We left Wineglass Bay as the sun shone and the water twinkled. M had deduced that conditions were to change and wanted to be gone before they did.

“Don’t worry,” he told us, “It will be champagne sailing all the way there.”

We settled in, anticipating a comfortable journey to Triabunna (a destination recommended by my cousin). I looked vainly for dolphins on the way out, but it seems that they only do welcomes, not farewells. Out in the ocean it was as if the weather goddess was trying hard to discredit M. There was a Very Large Swell.

Things were uncomfortable. Small DB quickly began to look peaky. There wasn’t a lot of wind. Basically, the conditions were the stuff of M’s – the boatbuilder – nightmare. Things were flapping and bashing and he was fixated on the little cars that carry the mainsail up the mast.

To be succinct, there was some captainly fury, lots of hauling of ropes and swearing. The weather continued regardless, as did the boat. Eventually, having motor sailed the majority of the way, we turned off to go through Schouten Passage – a narrow strip of sea between Schouten Island and Freycinet Peninsula.

Cliffs and rocks rose up on either side of of us and we were protected from the wind and swell. The mood onboard improved accordingly. 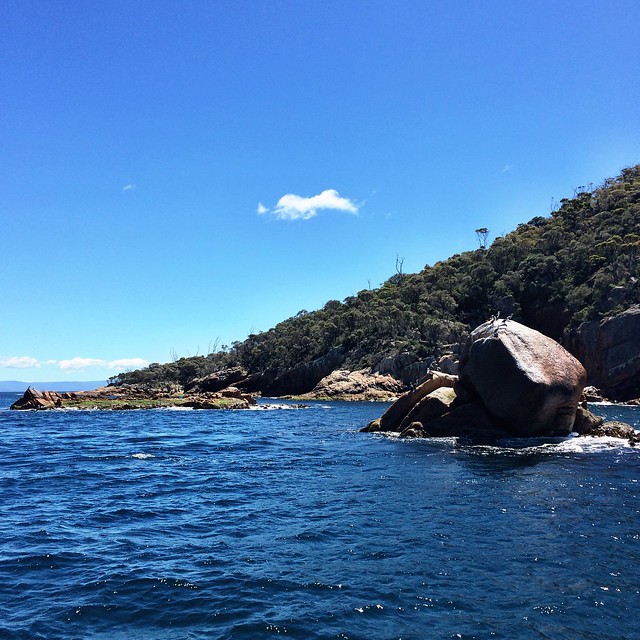 I felt we needed a break. There’s a well known sheltered spot called ‘Bryan’s Corner’ nearby, but on pointing in that direction, we saw Passage Beach – and I grandly informed M that we would be lunching there. It looked like a piece of subtropical Queensland had decided to plonk itself on the coastline. Gorgeous.

As we anchored we spied a strange thing on the shore – a lovely little wooden sailing boat, lying on its side. It looked like a scene straight of my favourite Little Golden Book – Scuppers the Sailing Dog. Oh woe. We jumped in Foamy and went to investigate. 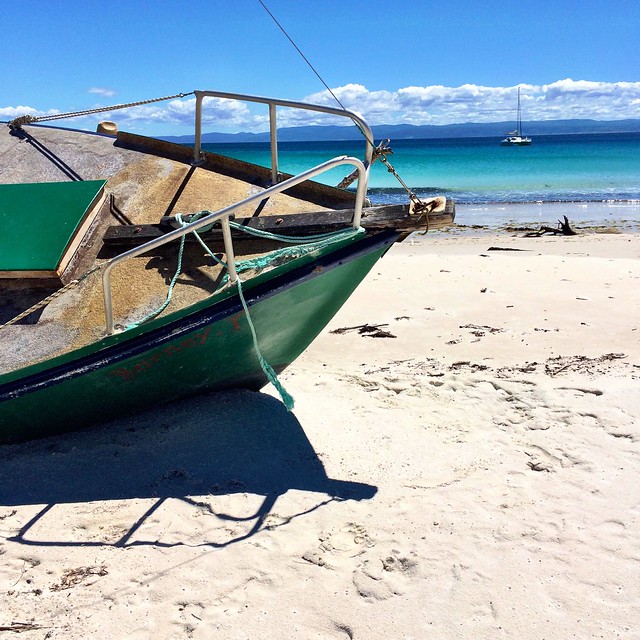 When I go to a beach I look briefly at the view or whatever and then focus on the ground. For I will one day find treasure. As an ancient crone, I will not only be surrounded by crochet, cats and knitting – I will also have a high-powered big arse metal detector – for TREASURE HUNTING.

So finding a shipwreck was Quite An Exciting Thing. Small DB and I ran over to investigate. Having read an extensive amount of crime novels, I sniffed gingerly before I let her climb aboard. I went first. I couldn’t smell a drowned person. But then again, I don’t know what a drowned person smells like…

The boat was empty of drowned dead people, but had quite a selection of drowned power tools. It was a well built and lovely boat – obviously still being restored/fitted out by whoever owned her. 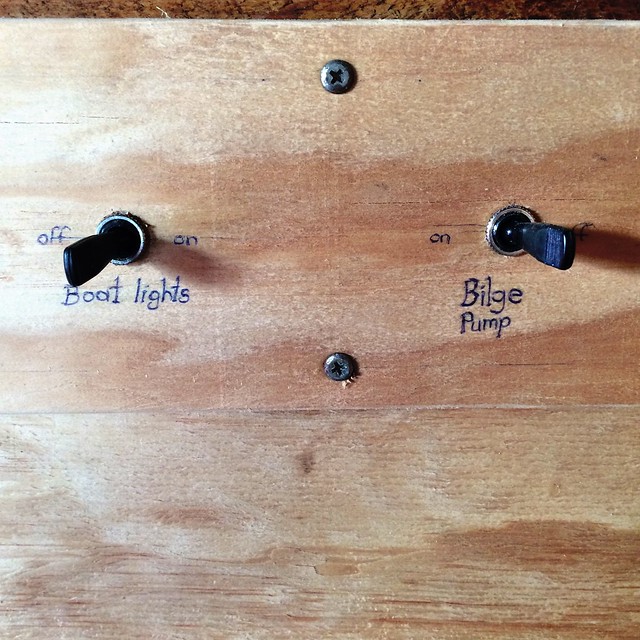 Obviously I fossicked through it, looking for gold. What I found was almost as good – TWO BOXES OF….TEA! Bushell’s loose leaf, to be exacting. As there was two, I felt that it wouldn’t be too evil to take one of them – the boxes were wet, but the tea was dry…

I also found an expired boat license, which I thought would help to track down the owner. The boat didn’t look like it had been there for more than a few days, although some birds had obviously explored inside…

Back on Bella Luna I made a pot of stolen tea… Bushells. Not my favourite sip – but tolerable if one doubles the amount of tea leaves one would usually require. And better than nothing.

Our sail to Triabunna was easy – notable only for one incident…. We have been leaving a fishing line with a lure on it trailing behind the boat (the proper word is trolling, which syncs perfectly well with cyber-trolling – throwing something nasty and sharp amongst people just to see who you can catch…)

Anyway, just as we got past the closed down timber mill in Spring Bay, the reel began fizzing. I took the wheel, M jumped for the rod. He had a fish!! I instantly decided it was tuna and wondered if we had wasabi. Meanwhile, M gave a yelp of dismay…. A huge sea eagle had swooped down and carried off his fish.

“I DON’T THINK SO,” M screamed at the sky, and began winding the line, fish and bird in as fast as he could. The sea eagle sensed what he was up against, and wisely dropped the fish, which promptly swam away. M was left with his rod, line and lure. I abandoned my dreams of wasabi.