Wineglass Bay and thank you Canada ??

It’s possible that if Wineglass Bay did not have a name that rolls from the tongue with beauty and precison, it would not be quite as famous as it is. I had no inkling that it was such a destination of choice – but it turns out that even the Mothership hit Wineglass Bay while backpacking in about 1971.

Our first 48 hours at anchor did not do a lot to impress me – I still hold West Cove on Erith Island close to my heart. The weather was not great and we spent 24 hours confined to floating barracks because of the rain that Would Not Stop. 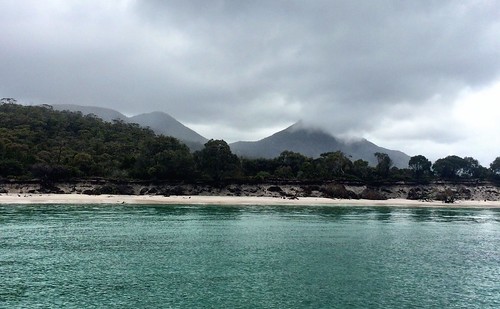 However. On Thursday 24 November (Happy Birthday Mung!) everything had been washed clean (except for us) and we decided to go walking around the beach, up over the pass and down the Coles Bay side of the hill. About an 8km round trip. The Smalls were forewarned about what was ahead of them. We packed some carrots, apples, and GLORY BE – encouraged by the exploits of Small DB – I BAKED SOME MUFFINS. OUT OF MY OWN HEAD. NO RECIPE!! Extraordinary.

The beach, when we stepped on to it just before 10am, was deserted. We hid our lifejackets in the trees and began walking. M said something to the Smalls that made them run ahead until they became hermit crabs on the horizon… I later discovered he had promised them one lolly each from the shop in Coles Bay if they reached the end of the beach before we did. 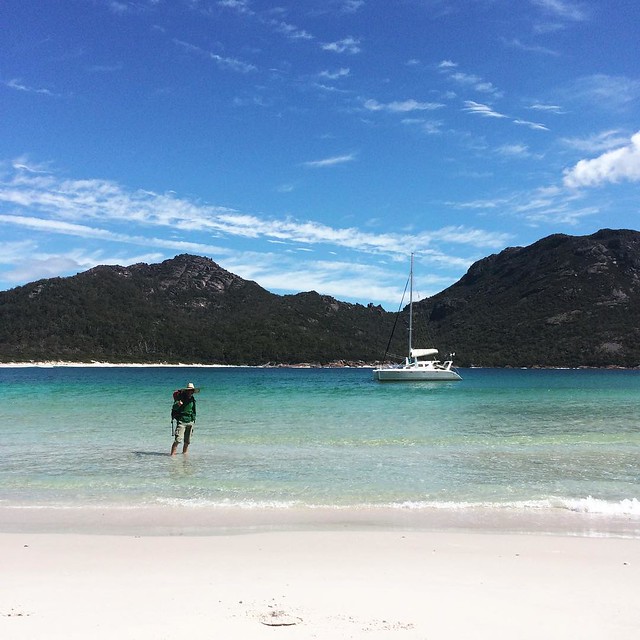 The day was sublime, and I got it. The whole Wineglass Bay thing. It is not any more beautiful than West Cove, but it is more striking – with the aquamarine sea on a sunshiney day bordered by the pale sand set against dramatic granite hills.

The closer we got to the end of the beach, the more people we began to see. All of them looking very put together. All of them in socks and shoes. I couldn’t understand it. Who wears shoes on a beach? Today it was everybody except the four of us.

M then told the Smalls that they would earn themselves one more lolly if they reached the top of the hill before us. I say hill, but it is a very mountainous hill. A considerable amount of it involves ascending higgledy piggledy steps made of stones going up like an escalator…without the helpful moving/escalating part…. 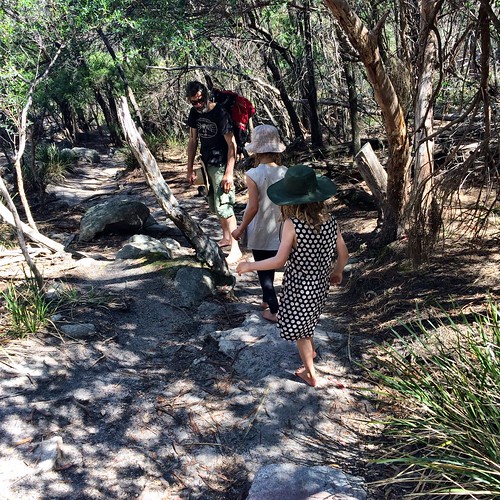 The Smalls hared their way along. We could almost tell how far ahead of us they were by the chirps of surprise coming from the well-shod tourists descending the same track. It seemed that no one could believe we were all barefoot – I even had a few coiffed women of a certain age gaze at our feet – all eight of them – and look too astonished to speak.

The track was one of the most foot friendly we had encountered on our travels. We assumed that all the people were from the same large bus tour – there were many nationalities but they all had one common factor (besides footwear) – none of them were as scruffy as we are. 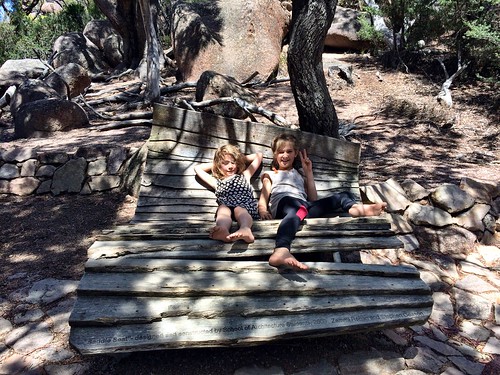 It wasn’t until we got down the other side of the trail that we saw the large carpark and realised that all these people were visiting Wineglass Bay separately – not on a big tour from a nearby resort. It was at that time M had the belated realisation that the shop he had waxed lyrically about to the Smalls did actually exist – another 10km away…

He asked several different people the same question, with increasing desperation. “How far is the shop from the carpark?” Small Z was measuring him up with her eyes, a mixture of fury and despair… But luck was on his side. The last people he asked, Keith and Bev from Vancouver, took pity on us. Not only were they happy to chat away to us for the last little bit of the trail, they took us to their campervan and gave us some of the promised lollies… and lo – the disaster was averted.

Bev and Keith – we are sad we didn’t get their contact details, because they were keepers – were super encouraging about our adventures and very sweet to the Smalls, telling them all about animals in Vancouver. Bev told us that snow in Vancouver now only happens in January, but that she remembered when she was a little girl, her father would flood their backyard in November or December and it would freeze over, making an ice-skating rink… 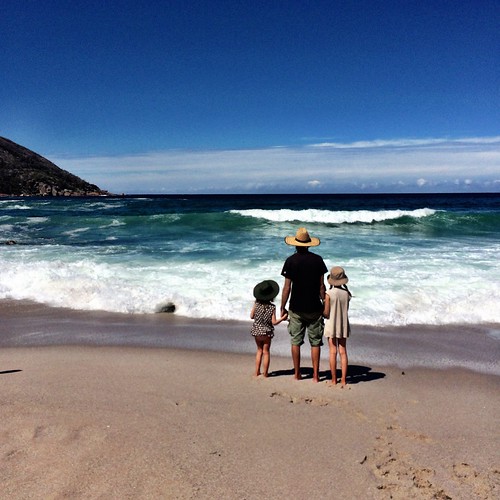