After a night protected by sandbank, at 5am we sailed off the anchor. I was up almost an hour earlier than that, determined to try and circumvent the awfulness of the day before in any way I could.

I took a tub out into the cockpit and the thermal cooker (to keep a few things cold) and filled them with snacks, breakfast supplies and a thermos full of boiling water. I did the all important hatch check (something we had forgotten the day before which had resulted in the mopping of floors and various items becoming sodden) and made the Smalls a nest on the deck.

Of course, the day bloomed into a beautiful one – far more benign than the day before. The Smalls were able to spend a lot of time inside as there was little bouncing around. I even got some reading and crochet done in the cockpit when I wasn’t steering. I had naps. M had one or two. My preparations made things a bit easier, but weren’t that essential…

It was my favourite kind of ‘champagne sailing’ – the kind where the sun is out, the wind is to our advantage and the swell minimal.

By midday we reached Eddystone Point, graced by the column of a lighthouse looking out over the Tasman Sea – which is actually the Pacific Ocean! Bass Strait was behind us, and I was not too sorry. We anchored in the bay behind the breakers and I toyed with the idea of staying aboard while M went exploring with the Smalls, but got talked into joining the expedition.

We motored to shore in Foamy and were slightly taken aback by there being two people on the beach. Ha! Only a month of cruising and we have the expectation that the first footsteps on the sand should be our own… ?? 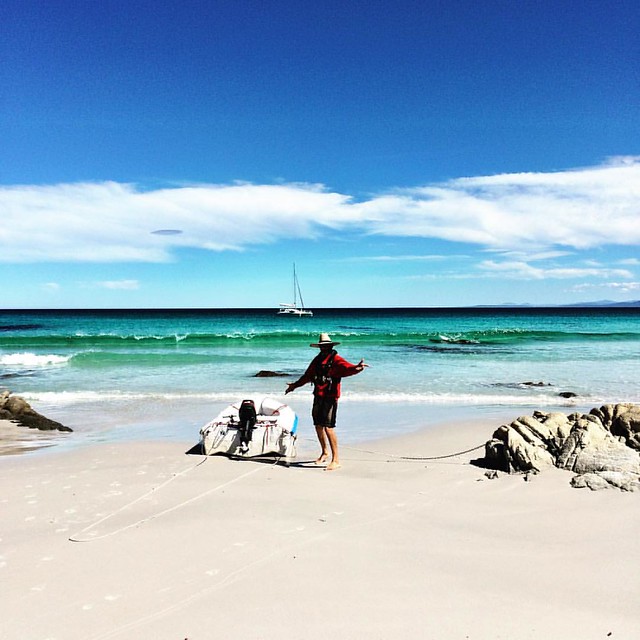 The walk from the beach up to the lighthouse found us on a tarmac road and a few cars passed us as we had the inevitable wrangle with Small DB about putting her goddamn shoes on. (She either has determinedly barefeet – which is fine unless there are lots of prickles around or the possibility of snakes – or shoes on, in which case she whines every few hundred metres because there pebbles in her sandals…this walk was completely whinge-laden.) 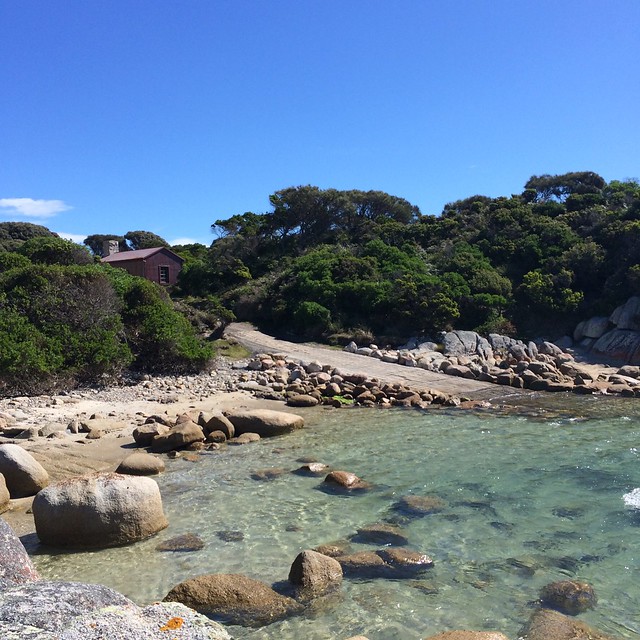 Just as on Deal Island we came across structures built back in the days where a lighthouse required the presence and attention of people. Firstly we saw a boat ramp heading down amongst the rocks…there were some guys there loading crates out of their uber-power boat into a van. M, the brother of legitimate abalone divers, clocked them as poachers. They definitely didn’t want to engage in any conversation and seemed to be trying to make a very quick exit…. Naturally I snapped a picture of their van, as I am a frustrated detective. 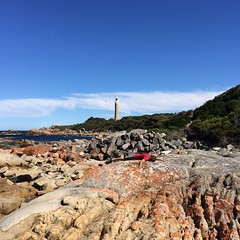 There’s a old structure at the top of the boat ramp – probably built in the 1940s or earlier. The door just had a bolt across it to keep it closed. The floorboards were long and wide – old hardwood from when there was a lot of it about – and a big fireplace down one end. 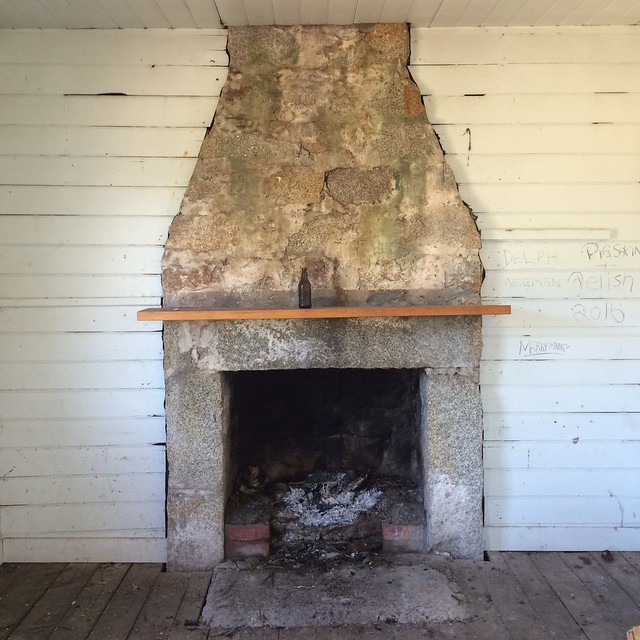 Over the short distance to the lighthouse itself there are three old stone houses – very similar looking to those on Deal Island – solid beautiful buildings with water tanks along the side. I look at these places – they appeared empty – and wonder why they’re not used as writer’s retreats or makerspaces. One seemed to be setup as a rudimentary place to stay – old beds in a bare room…

The lighthouse is a super-structure, a round pillar built with squares, a copper pipe affixed to each side – lightning rods. It was first lit in 1882 is the fourth lighthouse that has been on the site. The rectangle windows are buried in foot thick walls, deep enough to hide a whingeing six-year-old. 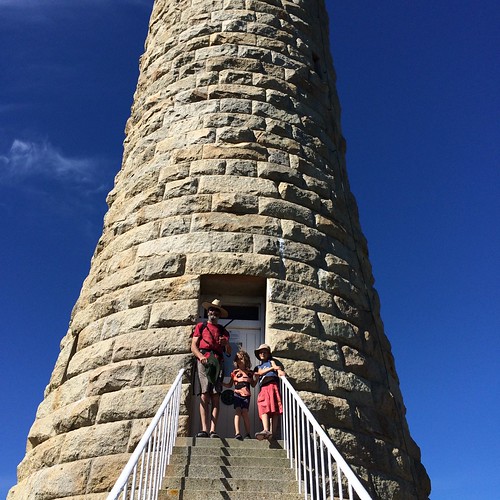 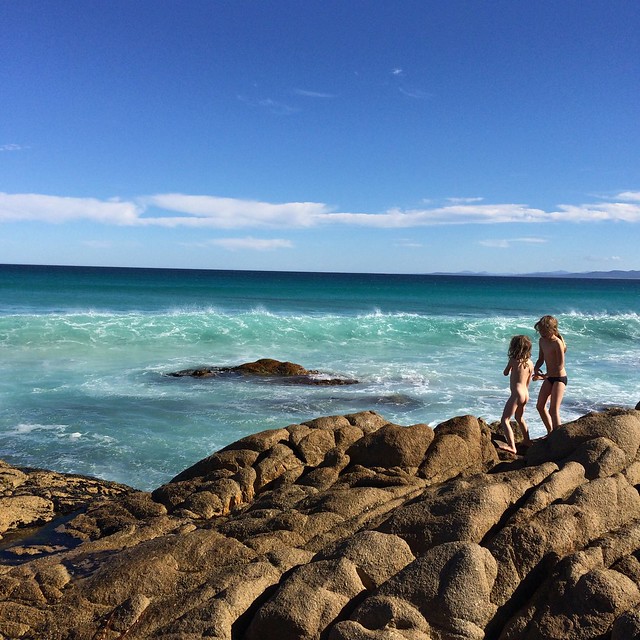 We found our way back down to the beach along a different, and shorter, path – and this was really where the Smalls wanted to be – rock climbing, beach combing, and finally getting their gear off and dancing in the spray as the waves hit the rocks. 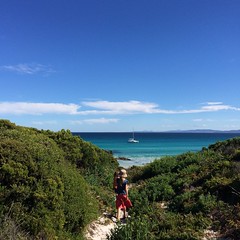 M eventually summoned us all back to Foamy – the breakers were getting bigger and the trip back to Bella Luna was looking a trifle dicey. Lifejackets on – we jumped aboard and went up and over our first wave – the Smalls, who had been looking a bit trepidatious, shrieked with glee.

“Do it again! Do it again!”
Regardless of their requests, we had to clear a few more waves to get back to the boat. We decided to stick there for the night, and spent the next few hours being lazy…until the breakers we had anchored well behind seemed to be moving closer and things were getting a whole lot more rolly – less than ideal. We pulled up the anchor, motored a bit further out and were able to settle in for the night.