We left Hastings at just before 8am on Wednesday morning – after days of strong wind warnings necessitating remaining tied up to the pier, it was our window of opportunity. It was initially straightforward, the closer we got to the mouth of Westernport, the bigger the swell got – it was like being on a rollercoaster – the Smalls loved it…

We were heading to Refuge Cove at Wilson’s Promontory. A big sail. I could write with more detail, but as I have to hike up a mountain in a few minutes to reassure the world that we are, in fact, alive, I will summarise as follows:

Arrival time at Refuge Cove: 2.20am

To provide a polite understatement, the journey was not pleasant. The beginning was fine. The last 90 minutes was sublime – we sailed into the blessedly calmer waters of the cove under the light of a (nearly) full moon. I had been sleeping on and off while M, in his element (putting in a 20 hour day) steered through the blackness of Bass Strait. He called me into the cockpit at about midnight.

“Check that out!” He was pointing to something that looked like a cross between a navigation marker and an oil rig – with an unearthly orange glow….

The moon was heaving up over the horizon – a huge orange beach ball peaching out of the black. Everything felt more friendly as it rose high enough to light our way…

Finally, after anchoring very carefully (thank you M nerding over screenshots taken from Google maps), it was time for bed. The Smalls had been stuffed into one of the big beds so I knew they were both together – we’d had to motor for over five hours because of waning winds, and they had both been lulled to sleep quite easily… I elected to go in DB’s bunk with a hot water bottle to revive the feet I had not felt for many hours. M headed off to his bed, and emerged in front of me like a morose shadow a few minutes later. One of the front hatches had been open and water had soaked his bed right through.

He had captained us so valiantly through the seas – I gave him the bunk I had just finished warming, and crawled in between the slumbering Smalls.

We slept, awakening four or five hours later to a completely different outlook. Blue waters, eucalyptus trees growing down to the beach and a cover lined by huge rocks and yellow beach. It was beautiful.. 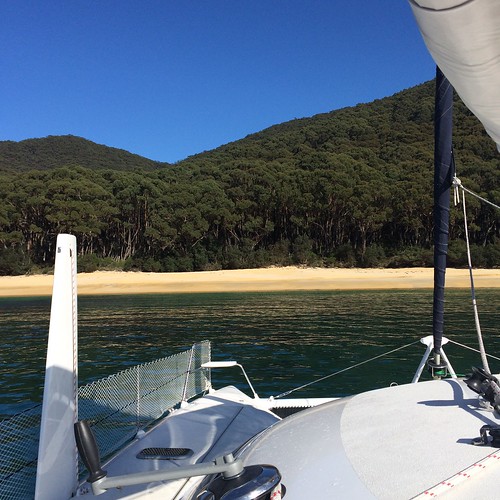