Out of the boatyard, into the sea.

In addition to the rules of ‘Don’t Fall Off The Boat’, ‘Wear Your Lifejacket’ and ‘Put Nothing In The Toilet That Does Not Come Out Of A Human Orifice (Except Toilet Paper)’ there is one other – simpler, but of equal importance: ‘No Deadlines.’

I tired, over the past five years, of telling people we were close to launching. Goldfishlike, I would start to periodically lose my mind, M would talk me down, repeat, rinse, repeat. Eventually the boat came out of the shed. YAY! We began living upon it.

“Yes,” I would say, as goldfish, “Yes, we should be launching in a month or so.”

First I couldn’t cope with another summer. Then another winter. Housesitting, beautiful wonderful housesitting, gave the Smalls and I some respite. An opportunity to have a dishwasher and washing machine purring in the background while we explored new places and prowled through gardens.

FInally, eventually, really and truly, we got the boat into the water. I quit my job that I had been doing for ten years in the goldfish-like expectation that we would be sailing away. But there was still stuff that needed doing. But the Smalls had stopped all their activities – violin, karate, most nature walks… I wasn’t earning money. And still there were Things To Do.

At the middle of each year I tend to find myself in a precarious financial situation and wait, with Bambi eyes, for my tax return. It came. I briefly struggled with the cost of lifejackets and tethers, and then came to my senses. Two offshore auto-inflatable lifejackets cost less than a new iPhone. Priorities, people, priorities.

I felt too idiotic to contact my work-friends, as it was so obvious (in retrospect) that I had left somewhat prematurely. M was making lists every morning that seemed to never ever get shorter. It felt as if we would NEVER EVER leave the GODDAMN BOATYARD.

And then it happened. “Ten days,” said M.
I nodded, as a goldfish would if it had a neck. I’d heard it before.
“No worries.”
As that tenth day – a Friday – drew nearer, M became uncharacteristically more frantic. He freaked out about my knot knowledge (or lack of), and various other things. The Friday materialised. “Do we leave today?!” shouted the Smalls.

There was stuff all over the boat, all over the dock and crap everywhere.
“No,” we said. “Two more days.”
We cleaned up the crap, took our last trip to the tip, realised that one of the Small’s lifejackets did not have a crotch strap and that our navigation wifi setup was complex. M and I were awake late into Sunday night, planning to sail in the morning. Planning to sail the boat that had been ten years in the making. Planning to jump aboard a gypsy life of no commitments and intense frugality.

But I didn’t feel right.

“I don’t want to go tomorrow morning,” I told an incredulous M. “There’s too much still to do – to tidy – to sort out. Let’s spend tomorrow getting our shit together, get an early night and sail on Tuesday feeling a bit more zen. I don’t want any SCRAMBLING. The whole point of cruising safely is to have NO DEADLINES. Let’s start as we mean to continue.”

I then exited stealthily to put away some clothes, and when I re-emerged, he was nodding. He agreed. And so it came to pass – the next day was a sun soaked Spring day and we were able pull everything together by about mid-afternoon. High tide, the morning after that, was at around 9.30am. After a last cup of tea with the boatyard elite, who had known us from before the time we had put our shed up, until now – with a 35 foot catamaran, an eight year old and a six year old – we cast off, into the inlet and motored down the channel into the bay – ready to begin a long awaited new chapter. Goldfish? Dead. 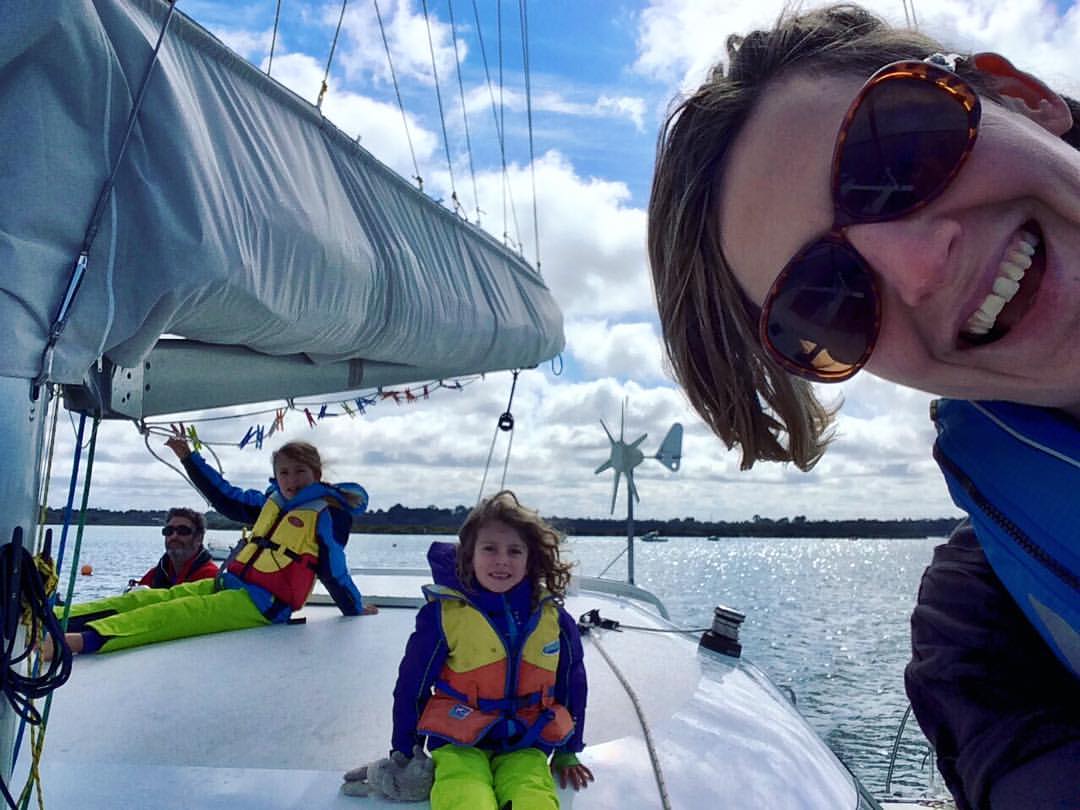