We left Dillons Bay for a little anchorage that we hoped would be a bit calmer – Ponusia Bay. The sail was fairly craptastic – everything banging around, the Smalls left all the hatches unlocked on the port side ceiling, I left the one above my pillow unlocked. Wet, wet, wet. Gah, gah, gah. Small DB was whey-faced and horizontal, her ear glued to an audiobook.

The redeeming occurrence was…

*WE CAUGHT A YELLOWFIN TUNA!* 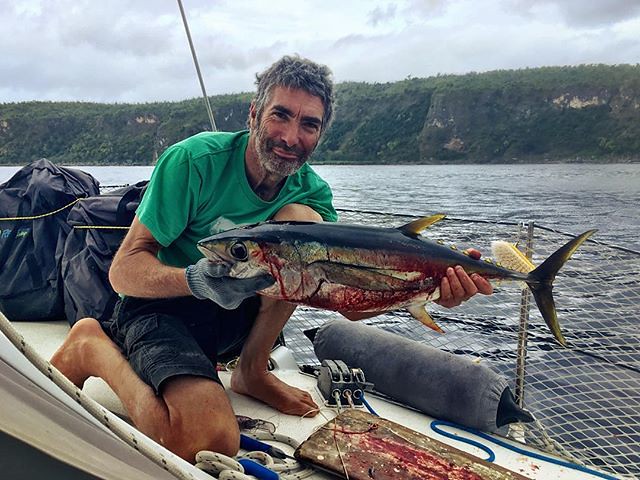 First fish we’ve caught outside of Australia (didn’t fish in New Caledonia because we were wary of ciguatera). WOW! It put quite a different slant on the day, knowing that once we finally arrived we would be dining on completely fresh sashimi. I did quite a bit of steering while M was busy gutting and scaling our fishy friend – we kept being whacked by bit pockets of wind that would fade out every five or ten minutes.

M, who inhabits an aquamarine-tinted world we describe as ‘the happy sailor’ sat at the wheel as we were being buffeted along, observing excitedly: “I LOVE THIS BOAT! We’re doing between eight or nine knots to windward!! This is so great!”

At such moments, the Smalls and I look at each other uncomprehendingly (if we’ve even heard him over the screaming of the wind) and ponder what must be Endured in order to get to Somewhere Good. Down in the kitchen, I managed to make M a coffee, myself a cup of tea, and slice up the tuna into chunks, which I bagged and threw into….

And then lay on my back, sipping tea, while M – fuelled by coffee – wrangled the boat toward a keyhole between two cliffs – Ponusia Bay. And yet again I search for the perfect word to describe the relief and gratitude that comes from a transition to calm waters. Expecto Patronus! A surreal anchorage, with room for only one or two boats… 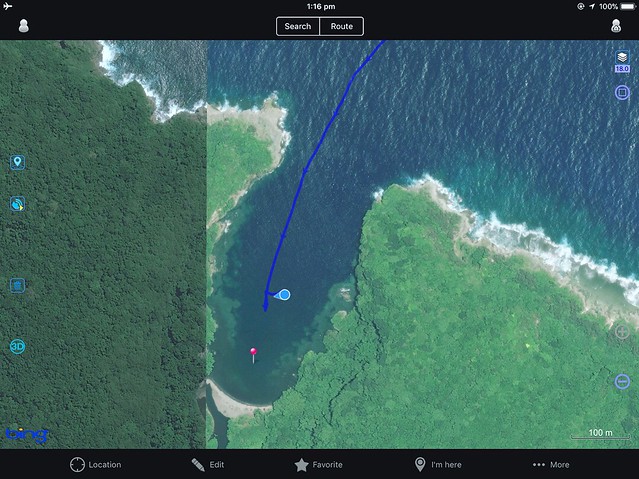 We thought that the immediate area might be unpopulated… 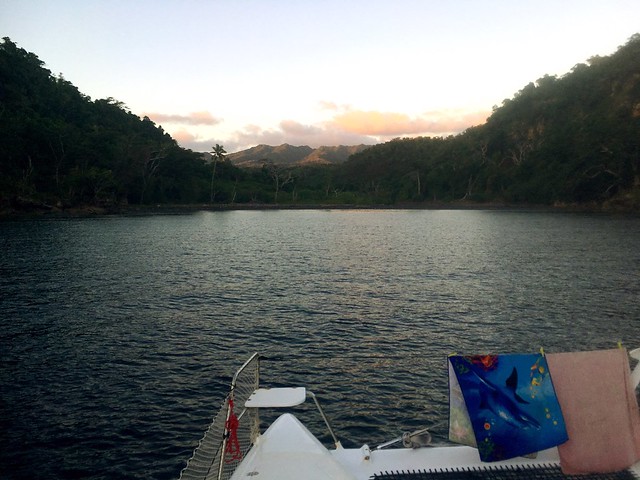 Then we began getting wafts of woodsmoke and a little while later we could see dome dark skinned people fishing from the rocky shore.

Meanwhile, as soon as the anchor went down, it was Operation CleanUp. Water was everywhere. Small DB and I dealt with most of the debris, Small Z soaked up the water from the floor of the port-side hull. A stealthy wave had entered the kitchen window / galley porthole at some point and had hidden itself in the bottom of two cupboards. Eventually we got it all sorted – the mattress propped up to dry and towels flapping from the front line.

M felt we should go ashore and request permission to anchor and go exploring, so he and Small DB set off to meet the locals. Small Z and I, too knackered to be social, stayed aboard. The following morning we all went ashore and met Rocky – the one occupant of the bay, and his sister, eight year old niece and three teenage guys who are related in some kind of way. 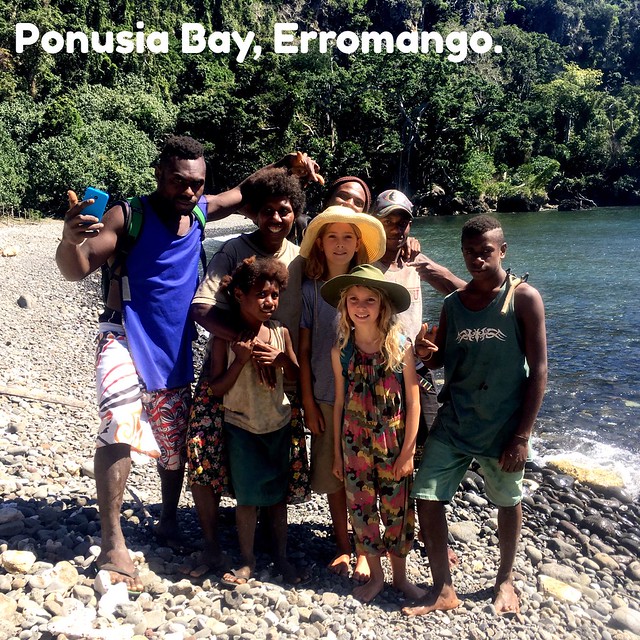 They told us that there used to be a village here, but there was a war between the occupants and people who had come to take sandalwood trees. They took us to see the caves where the villagers had hidden, gifted us pumpkin and papya and cracked open beach almonds for us to nibble. They don’t say, “Crack open the nut.” They say, quite correctly, “Kill the nut.”

In further conversations with Laewe, the only woman, she told me that people had been stolen by people on ships for slavery in Australia – the sugarcane industry. She said boats used to come into this bay to take sandalwood trees away. “Many people killed, no one left.” Her brother, Rocky, has only been living here for two years on the land he inherited from his father – for many years before that, there was no one living here at all.

All of the group were keen to come and see Bella Luna, and we brought them aboard in two trips. I had cooked up a bowl of chickpeas earlier that morning, so we all ate them from a bowl, while they looked around the boat. They were super excited to hear Small Z on the violin – something they had never seen before. M played them a song on the guitar, and the Smalls and Gwendoline drew pictures outside sitting at the table. 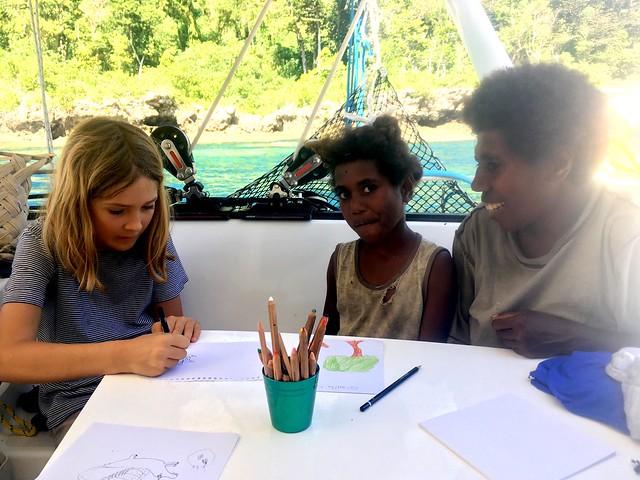 That night, as a result of a burst of daylight enthusiasm, M met Rocky by the light of the moon and they went snorkelling for lobster. HUZZAH!!! 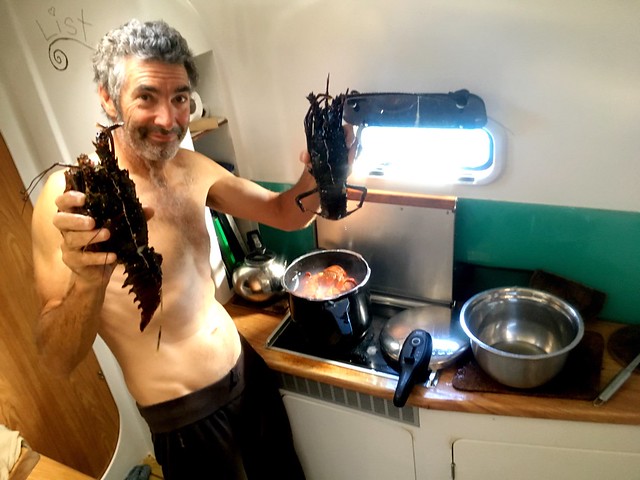 The ultimate payoff being that the Smalls don’t like lobster, so M and I shared three between us. YAAAASSSSS! 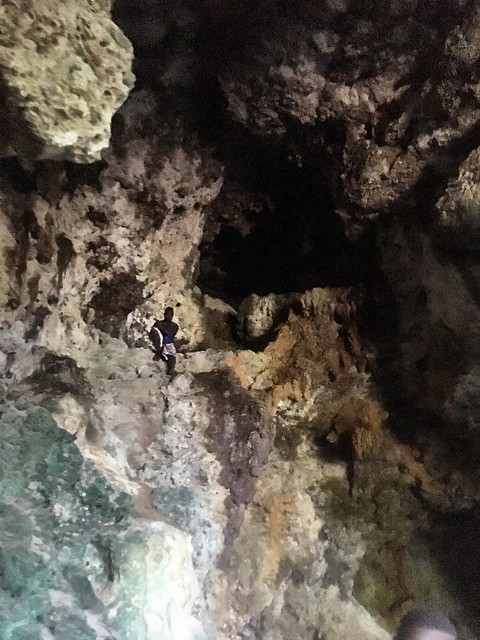