On our customs forms we had indicated we would be arriving in Port Resolution at lunchtime on Thursday 2 August. If you want to check into Vanuatu on the island of Tanna (not one of the check-in ports) you have to apply for special permission – which we recieved. It costs a bit of extra money for the authorities to come over the island to Port Resolution, so we hoped to split the costs with Pandion and Paws who had decided to make the same journey at the same time.

The forecast for our passage was good. When I say good, I mean straightforward and generally benign. I did not have a flutter about it. We left Anse Majic in Baie de Prony at around 9am; with our brains set on the 2pm Thursday arrival, we slowed our progress on purpose, using just the jib – it wasn’t until 2pm that we decided to change our plans.

Always, when planning a passage, we assume an average of five knots – sometimes it’s faster, sometimes slower. On this occasion we had enough wind to stay between seven and 10 knots, so we decided to whack up mainsail and jib. If we kept up our pace it might be possible to arrive on Wednesday evening. All my fingers were crossed for this outcome.

We fanged our way through the rest of the day. Small DB had made her normal nest on the couch. Small Z welded herself to her iPad. M and I did one hour one, one hour off during the day, and two hour shifts through the night. At about 2am Small DB appeared, feeling the quease, and I set her up on a beanbag in the cockpit with a blanket and an audiobook. There she stayed for the next 15 hours, reaching out occasionally for a carrot, a cucumber, a gummy, some frozen orange. 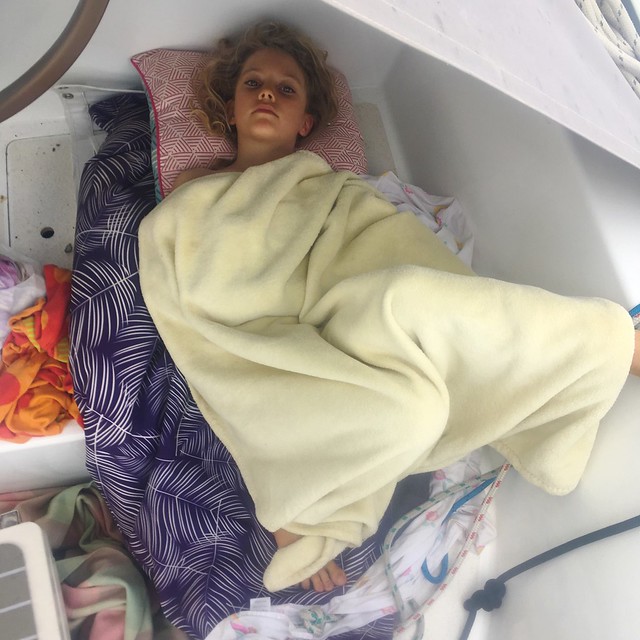 I am loathe to buy packaged snack foods normally, but even more so when I was provisioning in Nouméa, where a packet of seaweed rice crackers cost about $4.50AU. Small Z was not impressed with my provisioning and ate only an orange between breakfast and dinner on the second day.

Mid-morning of the second day, the autopilot broke. It’s amazing how differently you can interpret such news when there is hope of arriving later that day – had it happened in between Australia and New Caledonia, it would have been a totally different deal. As it was, we continued doing an hour each – I enjoy handsteering, although Captain M did more of it on account of the fact that he seems to be able to wring more speed from Bella Luna – and this was fairly imperative if we were to arrive before dark. 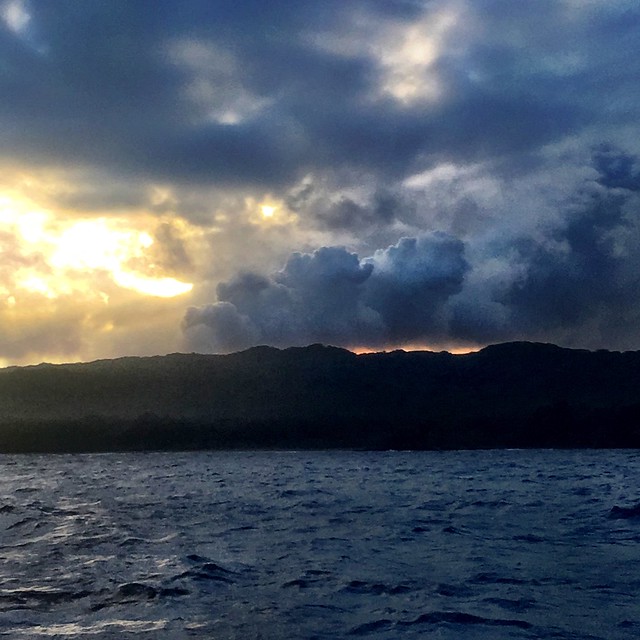 At about 3pm Vanuatu reared up from the sea, peaks shrouded in cloud. Unlike New Caledonia, it didn’t look like it had broken off Australia millions of years ago – it looked like it had been volcanically up from beneath the sea. It was quite mesmerising. By that stage we were confident of getting in before dark and Small DB managed to extract herself from her nest. 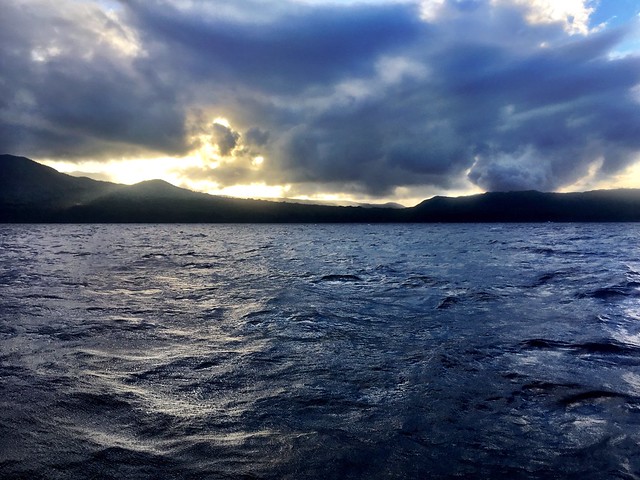 I could see the glow of the volcano – and somehow, as I steered, the volcano seemed to be slowly levitating… Which puzzled me for some time, until I realised it was a big fat moon rising from behind the volcano… I described this to the talented Cruising Cartoonist, who captured it perfectly:

Just as there must be a word for the feeling of motors being turned off and the sails taking over (Silencio!) there must also be one for the sensation of relief coming in from the sea to a protected harbour. Quite blissful. There were three other boats. We dropped the anchor at 5pm, just as dusk started sneaking in. Mt Yasur, the volcano, could be seen glowing – making clouds with smoke.

M took down our French and Kanak flags, replacing them with the yellow quarantine flag that’s required whenever you get to a new country (it comes down once you’ve been checked in) and the Vanuatu flag. Then we each had a stiff drink. Night fell.