Gold Coast. Show me the money.

Over two and a half weeks in this joint and a large part of it has felt quite fraught. The travel immunisations we had really knocked around the members of the crew who have an autoimmune disease (i.e not M) – who have correspondingly caught some kind of snot/sore throat / general malaise kind of thing. It’s gross. And demoralising.

Haemorrhaging money on going-overseas-preparations sucks no matter how good you feel. I have sold shares from some of my Dad-money and keep reassuring myself that;

3) other people (not us, who have a $5000 limit as what is acceptable to spend on a motor vehicle) spend more than this on ONE CAR

4) the majority of purchases have been secondhand…

What new (or new to us) items have we felt the need to acquire in order to leave Australian waters? Let me elucidate;

1) The aforementioned water-maker: I have always felt they were a cruising perk-too-far. Like taking a pillow camping. Seriously, people have been sailing for a hundred years without them. Catch some rain, goddamnit. But (there’s the ‘but’) – that’s all very well for Australian coastal cruising – we want to explore far flung islands around New Caledonia and Vanuatu.

Our water tanks are of a moderate capacity i.e we have a 60 litre stainless steel tank for drinking water and a 300 litre tank for washing dishes and (very occasionally) ourselves. We call this the ‘mank tank’ because it is entirely lined with epoxy (BPA) and we don’t drink from it (although of course we could if necessary – endocrine disruptors be damned).

I want to avoid having to make our cruising plans around having to get water (which is harder to come by over there). A water-maker will make this a non-issue, and will also help to avoid any health complications that might happen from potentially contaminated water. I’m happy to drink from fast-running Tasmanian creeks, but I’m not as confident off my home turf.

We know of people who have spent over ten grand on their water-makers – most others spend at least four or five. Of course, we like to discover the cheapest and best possible solutions – ours has cost $2100 and that includes delivery to Australia. Haven’t got it yet, but it is going to be awesome. OK. So we got it. After we coughed up another $400 to customs because we imported something that was worth over $1000AU – so…still cheap, but FAAAAARK.

2) A freezer. Top of my list for over a year and surrounded by rainbow hued unicorns. I dumped $1000 on a secondhand Trailblazer 60L fridge freezer after stalking Gumtree/ FB Marketplace /eBay for many months. Only had it for three days. We had to chop a bit of shelf out and remove a door to get it into where it now lives. M and I are not yet fully convinced it’s going to work out – power-consumption is an issue. As is the fact that it’s not a freezer, it’s a fridge / freezer. 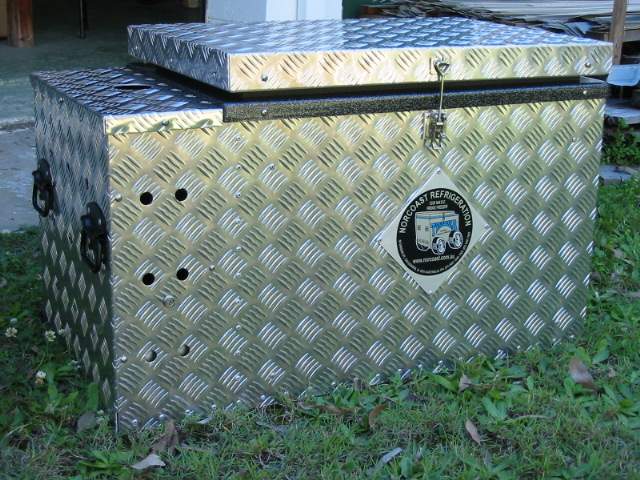 And, in the same way that I don’t necessarily have a fully understanding why we need a spinnaker AND a second jib, M remains unable to comprehend my freezer obsession. “What are you going to put in it?” he keeps asking. And I keep replying, “Bananas. To make ice-cream. Ice-blocks. For cold drinks. Frozen peas. For dinnertime excitement. Fish. That you will catch.”

I do not add PRE-COOKED MEALS, RAW NUTS, FROZEN BERRIES and VODKA. Hello? I could fill a freezer with necessities with my eyes closed and one arm tied down.

3) Travel Immunisations & Medical Kit. Never, ever, ever have I walked out of a chemist so gobsmacked at having my bank account bleed out. I didn’t really understand the logistics involving the administering of travel immunisations. You have to go to the doctor, get prescriptions for what is required, go to the chemist, put in your order, pick up the vaccines, keep them in your non-vaccinating friends fridge (to your secret hilarity) and then take them back to the doctor so she can stab the whole family.

In addition to that, I had a list of medications that our nurse/boat-friend recommended for overseas travel. I walked out of the chemist having said goodbye SIX HUNDRED AND SIXTY FOUR DOLLARS. Hello sore arms and a bucket of expensive drugs I hope we never have to use.

4) Boat Insurance. Our normal $2500 annual payment of boat insurance got another $1200 whacked on top of it for the pleasure of leaving Australian waters. *dead eyed stare*

5) Satellite Phone. Quite honestly, if the Smalls weren’t aboard, I don’t think we would bother with the satphone. It’s so frigging expensive – I would use a Garmin InReach. But anyway. Secondhand Iridium Extreme? $560 Even me. Queen of Frugal. But the phone is only half of it – then you have to dick around with phone plans, an “optimizer” – something that automates the communication between your satphone and your computer, a GPS external antenna, a subscription to XGate – an email compression service. It goes on, and on, and on….

Just setting up the satphone/Optimizer/XGate scenario somehow took four minutes of airtime. Cost $11. WHAT THE?!? The only reason I knew was because I got an email saying, “You have used $11 of your included value allowance of $15.” FFS. I could adopt and feed a meteorologist for less. Gah.

7) Spinnaker. We have always wanted one so we are able to harness the light, champagne-like airs I love to ghost along on. Now we have one. $300. Secondhand. (Thanks, Rea.)

10 Rocket Guide. The Rocket Guides to New Caledonia and Vanuatu are the other thing (besides the watermaker) that everyone tells you not to do without. They are, apparently, a digital compendium of ALL THE THINGS a cruising boat would ever need to know about those areas. They also suggest you wash out coral cuts with bleach, and warn against ever removing your shoes – because of the

At some point in time I will throw together a post that gives a solid rundown of what we’ve expended in order to get Bella Luna ready to leave Australia. This guy’s article (from October 2017) gives a great overview of his experiences. Reading it back now (as opposed to when I discovered it three or four months ago) it’s even more pertinent.