Although we hoped to be in the Clarence River by now, we are not. We remain in Brunswick Heads – and OH MY GOD – it’s hardly a chore! We love it here!! As I type this, M has taken the Smalls to a Hogwarts School Fete at Coorabell Primary, where our friend Marco is a student.

We have been kicking back, doing lots of swimming and the Smalls have been practicing on surfboards for the first time. (In the same week that M found two boogie boards abandoned in the park – they’ve been using them as well…) 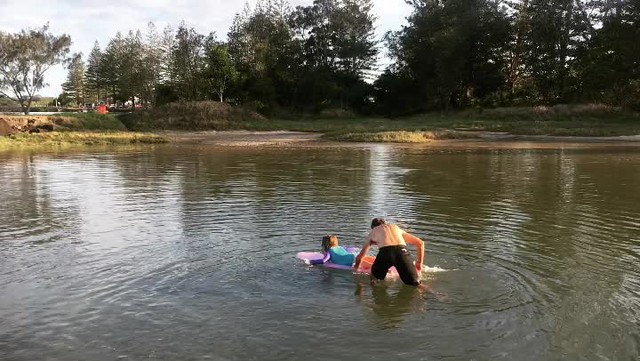 I love that we are catching up with our friends who we haven’t seen for soooo long. We are hoping they will meet up with us for a few days on the Clarence River once we make it there. 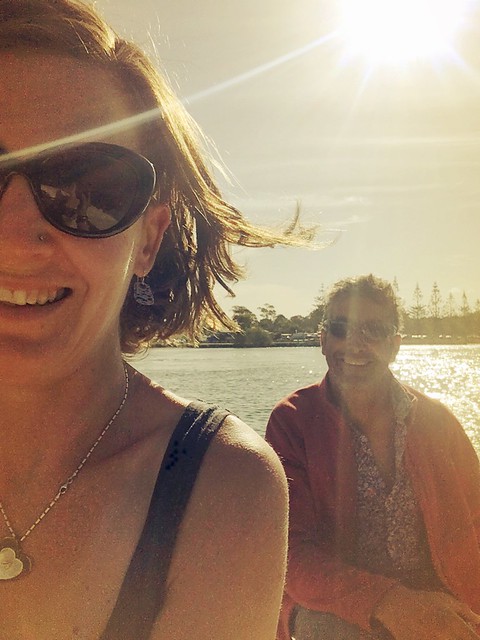 So… three weeks have passed. That’s what happens when you find a modicum of perfection. It happened in Hobart, Franklin, Middle Percy Island, Brisbane – and now here. There are just a few unimpressed local eyebrows raised – but for the most part, the people who use this beach regularly swim or paddleboard around the boat – toddlers swing from our ropes.

M had an encounter with an official guy last weekend who alleged that we weren’t allowed to anchor here. Wrong. We’re legally allowed to remain here at anchor for 28 days (I like how NSW regulations use the lunar cycle). He stated that the beach is used by many disabled people and we could be in the way – could we please move Bella Luna back into deeper water just over the weekends?

Not a problem. On Friday during the midday high tide, M and Small Z moved the boat about 15 metres further out. When I got back from the library and laundrette I was thrilled to sit in the cockpit and take in quite a different outlook.

All of our time until that point Bella Luna had been secured with anchors fore and aft – so instead of swinging freely and the cockpit remaining out of the wind, we copped whatever the weather served at us and had a constant view of the beach.

It was like a lovely e-x-h-a-l-e to sit outside with a cup of tea and look left, down the river where the road bridge cuts between the water and the sky. The sunset that night was just dreamy… 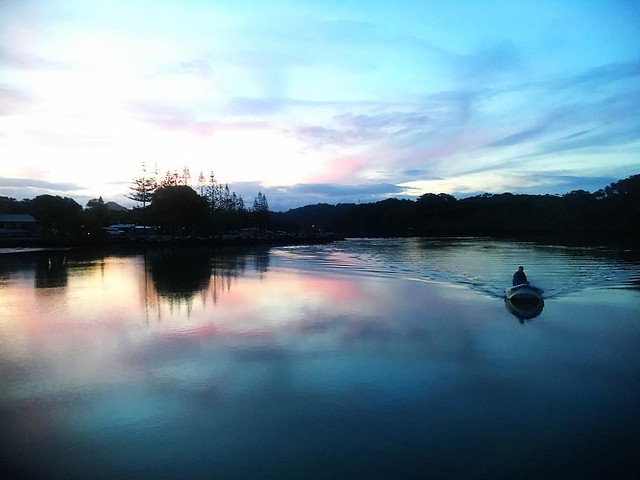 We’ve been so lucky to spend some chunks of time with our friends Jen and Ian – and their offspring. Small Z and Small M are just a month apart in age and they enjoy each other – and, also importantly, seem to be able to include Small DB in all their potions and plans without her feeling like a tagalong.

My dear little Claudia (the kid who made me think that parenthood might not be so bad after all) is now tooling around in her own set of wheels, balancing the demanding social life of a 17-year-old with school work and a part-time job.

Gosh, I remember seventeen being such a blast. More than almost any other age – a time of massive change and emotional ups and downs. The awesome feeling of finally being in charge of your own self. Yes!

So my not-so-little Claudia and Small M both elected to be hoisted up the mast – where they took in a 360 degree view of Brunswick Heads from about 12 metres above deck height.

The Sunday market was a buzz – Small DB did a little bit of busking. Small Z and I got two wetsuits for $40 – and I am so happy about that – particularly mine, which is a long-sleeved, short bodied number – exactly what I’d been looking at in all the surf shops where the cheapest one were $130.

We tried them out, swimming from Bella Luna over to the shore where the caravan park is – at our old Site 130 – and then jumped under the freshwater shower there. I had, of course, forgotten we needed to get back to the boat somehow… D’oh. Back into the briny I went.

Time is passing so quickly here. We are library regulars and pretty much go there everyday, feeling so thankful they gave us cards so we can borrow both hard copies and electronically. 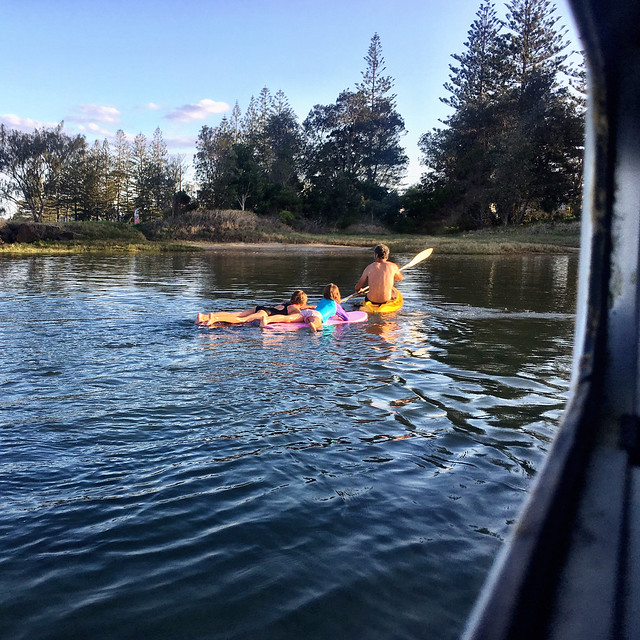 The first ten or so days here, it was basically SUMMER. I mean all capital letters S-U-M-M-E-R. About 30 degrees every day – something that would usually make me faint in despair – but how different things are when you can just jump over the side to cool down?! This was exactly what was lacking from our time in the Brisbane River – such a fantastic location, but swim in the river? Never, ever, ever. 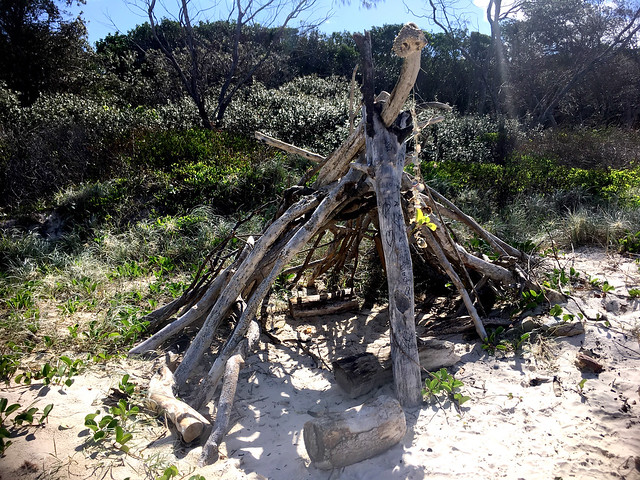 We heard rumour of a legendary rope swing that someone has hooked up to go out over the river somewhere near the bowls club. We motored in Foamy under the little road bridge, and then the footbridge and further and further down Simpsons Creek (one eye on our very low petrol level) and the other on the bank.

“It’s there!” I pointed – if there hadn’t been a bench there, it would have been easy to miss it…. 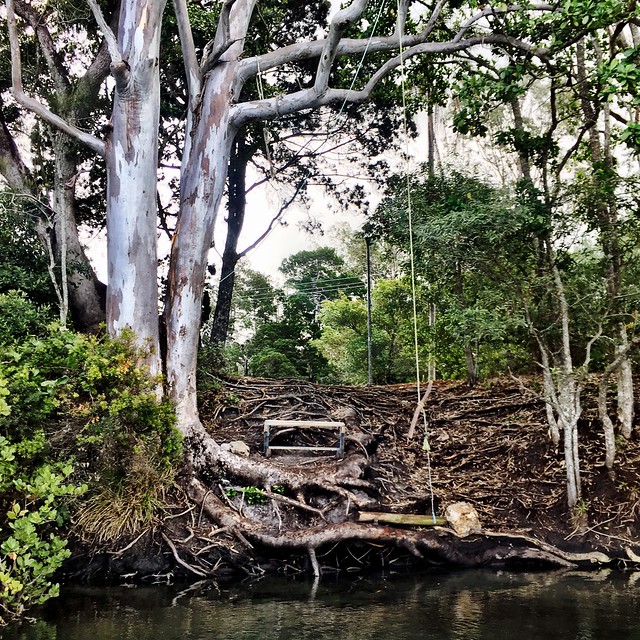 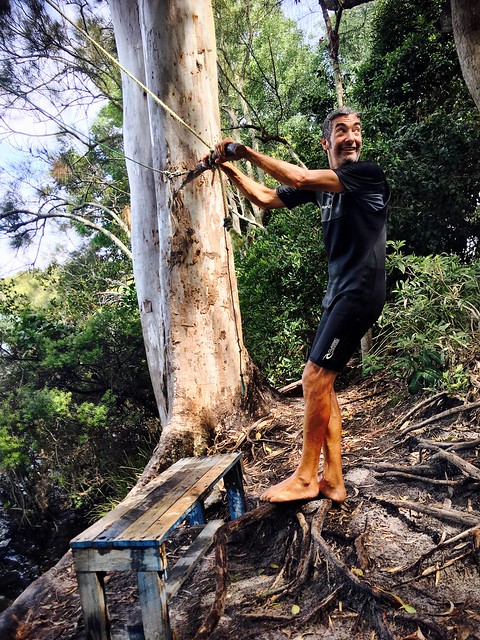 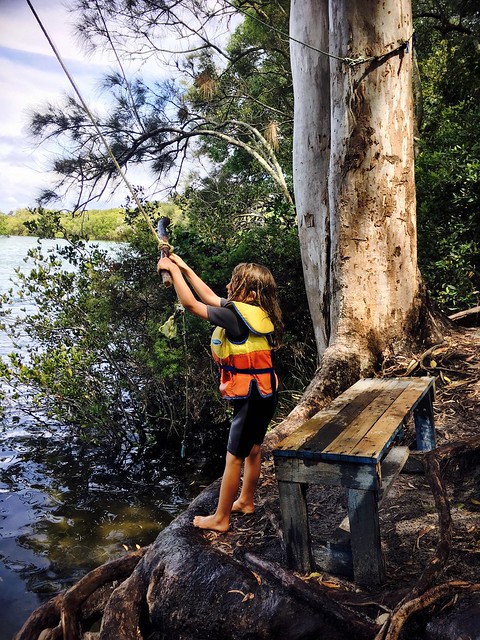 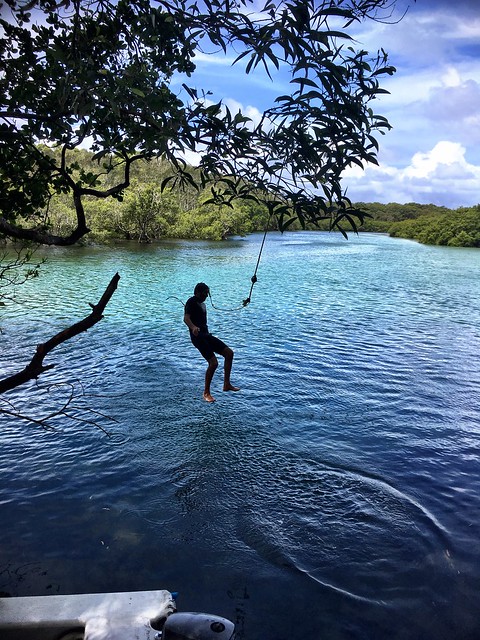 Yesterday we walked through the rain to the library, where we spent a consoling hour and a half. M had just stopped for a coffee on the way back when I received a text from Ian. The kind of text that sends shivers through anyone who tries to keep up the pretence that they live in orderly surrounds i.e. neatly

I did text him back in a chastising fashion, ending in AAAAAAARRRRRRGGGGHHHH. He had promised to text to let us know they would actually be coming – not that they were IMMINENT. M and I went into mental tailspins at the state the boat was in – not so much for our friends, but because they were bringing IAN’S MOTHER!

However – it was a lovely lovely reboot to our day. Lorraine (mother of Ian) was so delightful that we offered her a (very slow) sail back down to Sydney, which she happily declined. We drank cups of tea and coffee, ate a bag of peanuts – and were generally minimalist hosts (being in the more poverty prone side of our fortnight).

We had a very nice afternoon – the Smalls all ran around doing what they do – plunging in and then out of the water, drying off and then gathering to do some Minecrafting in the bedroom. I lent Lorraine my copy of Frugal Hedonism and we all discussed whether stripping out Bella Luna and AirBNB-ing her (as we camped somewhere) might be a possible summer earner…

Even though we haven’t taken a great deal of notice of it, the hours time difference between here and Queensland has given a different rhythym to our days. I think I preferred the Queensland one – waking up between five or six in the morning, and going to bed earlier. On NSW time we’ve started going to bed later and later, and not getting up until about 8am. Gah…

Last night, when we ordinarily would have been eating dinner, we went for an exploratory wander over near Torakina Beach (that’s what I learnt the Babies Beach is actually called) and out on the breakwater. The bar continues to look quite crazed, and this picture is a great explanation as to why we are waiting for a day when conditions are calm. And we will wait as long as necessary. 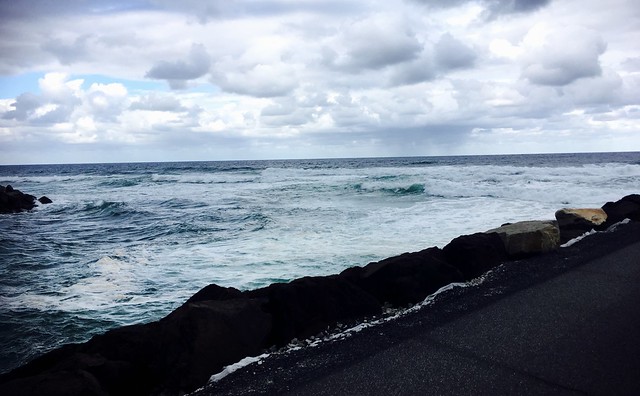 We walked down the only street in that area, with the surf beach on one side and then houses that front on to the creek… I found a pair of ‘Made in England’ Dr Marten boots on the road, but left them to their own devices. A size too small.

M took a liking to the tennis club building… 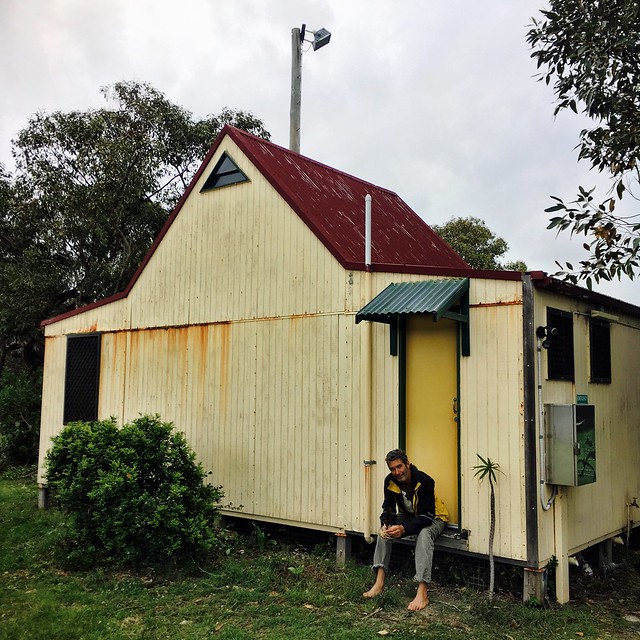 We found another fairy glade near the start of the footbridge… 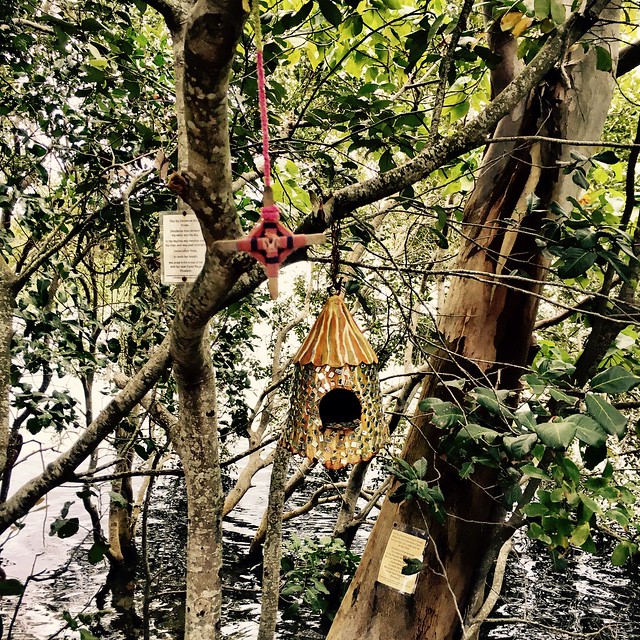 And ended the day by running back to the boat in the pouring rain. Spring rain. No bad thing. 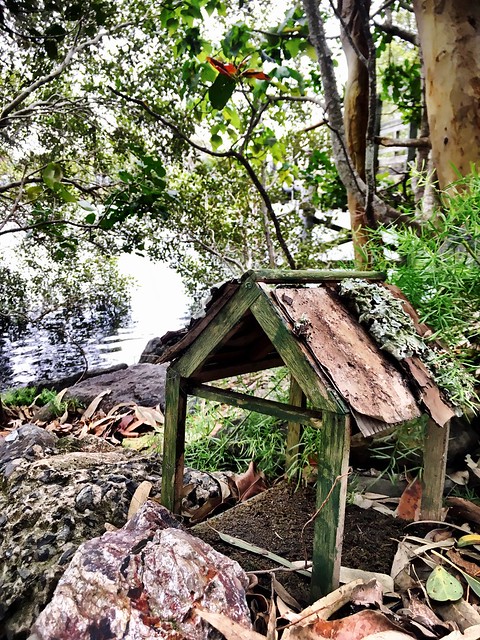