Genesta Bay and on to Goldsmith Island

We actually did finally manage to leave Airlie Beach. It took three attempts – the first being thwarted by Small DB having her leg sliced open on an oyster shell, the second by staying at Hill Inlet for five days and getting so low on water that it was silly not to return 20nm to Airlie – so we filled up on fuel and water, did some more provisioning and departed (again) on Wednesday 16 August.

Even though I am intimately familiar with Melbourne weather and know the dirge of getting up in the cold and the dark, schlepping myself to the train station and doing the same thing in reverse at the end of the day, it is almost impossible to summon it in a visceral sense. It’s as if I am in a different country – it is as if I am in a Melbourne summer; sweating gently in 28 degrees and thinking wistfully about slightly cooler climes.

I can’t say any of that to southerly friends, however, and I am not entirely disparaging of winter. I like the soups, the fires, the bracing walks and the slow cooker – but I suppose that spending the past few winters in the boatyard have soured me a little – the cold made everything so. much. harder.

If I was, let’s say, in a strawbale house in Daylesford (like my friends Tania and Adam), I’m sure my outlook on a Victorian or Tasmanian winter would be a lot more positive. Except when it gets to late August and feels like it is never going to end. But I digress —> back to the Leaving of Airlie Beach… 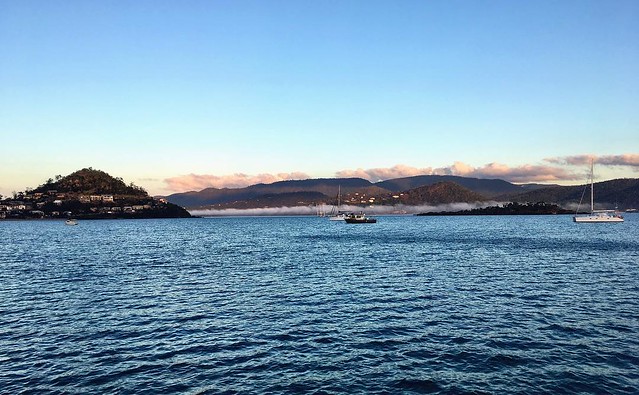 It was hat-and-zinc-cream-hot. We had only focussed on the actual departure, not on what our destination would be. Thus, we decided en route to anchor for the night in Genesta Bay.

We arrived about an hour before sunset, so there wasn’t really time to explore, but we were the only boat in the bay – a lovely change from the caravan park nature of Airlie Beach.

M, Small DB and I went ashore in the morning, leaving Small Z with a radio and some nine-year-old solitude. We gave ourselves an hour, as the tide was on its way out. 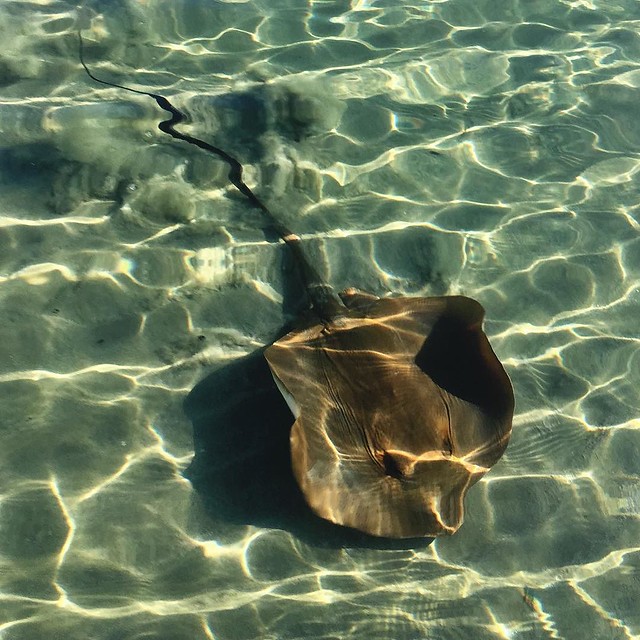 There was an expanse of flat sand that eventually gave way to a softer, looser texture the further we got up the beach. 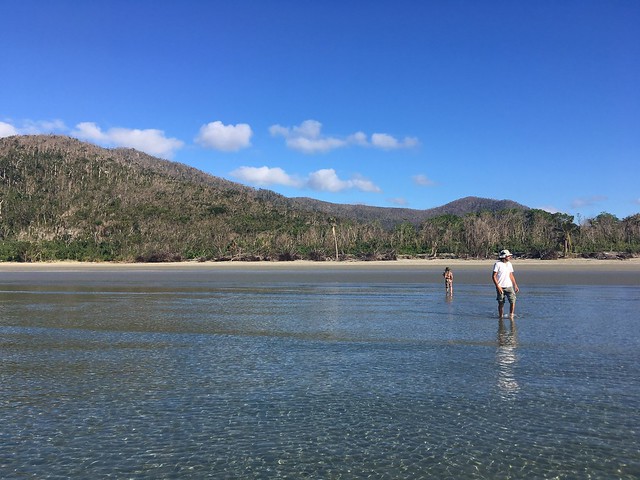 What we hadn’t been able to see through the binoculars from the boat were the trees. They lay on the ground, their root systems facing the shoreline. These were big trees – with ropes, flotsam and jetsam tangled amongst them. Swathes of pumice and driftwood and the inevitable plastic were way up beyond, intermingled with the grass and vines that were overlaying the edge of the sand. 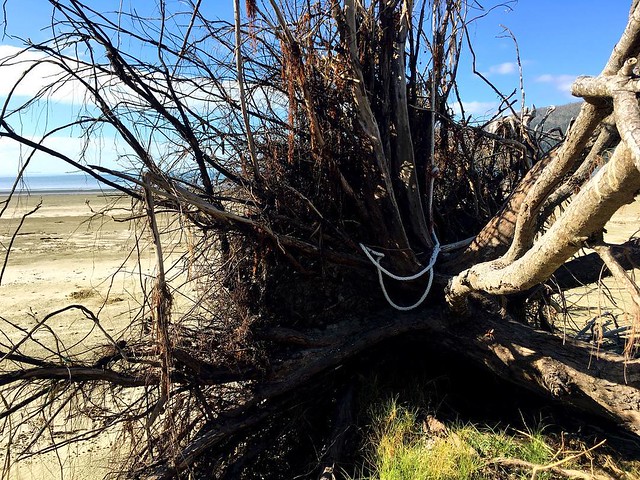 Genesta Bay had been s-m-a-s-h-e-d by Cyclone Debbie – it looked like the storm had come straight down the bay and flogged the hell out of it. Here and there were a few solitary palm trees that had somehow withstood the onslaught – one of them was simply a trunk – a leafless stick. 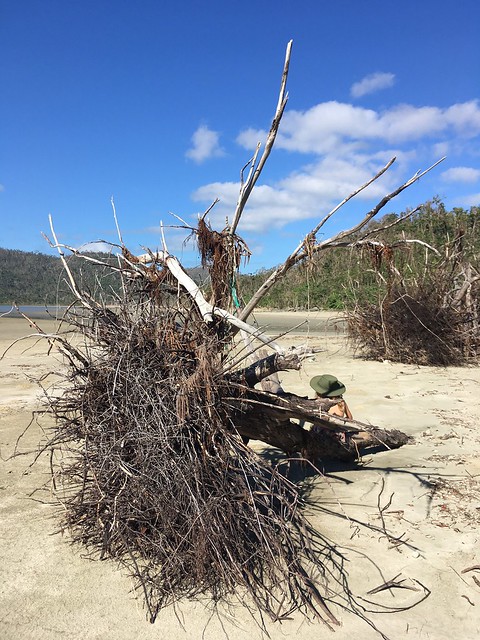 There were no human footprints anywhere on the beach, but we saw goat tracks.

M and I had a walkie talkie each and after we’d been exploring different parts of the beach for about 20 minutes I heard him yell – not over the walkie talkie. I depressed the button on mine and spoke into it.

“What?” In the distance I could see him fumbling his own unit out of his pocket.

“Oh,” said M, sounding flustered. “A huge big enormous wild pig just came out of the bush and it’s standing on the beach right now looking at me. It didn’t even do anything when I yelled!”

“This is serious! Keep an eye on Small DB and grab a stick. They can be really dangerous…”

I had the momentary and unique impression he’d been killed by a wild feral pig, but then his voice crackled back out.

“It did a huge snort. It has TUSKS! It ran back into the trees…”

Small DB and I selected beautiful driftwood sticks to twirl at potential beasties and continued our exploration. We found a little creek. We collected a big pile of rubbish – so much rope, bits of random plastic, ice-cream containers, soft drink lids. It’s super frustrating not to be able to take all of it, but I try and get either the biggest things or the most lethal looking tangly things. 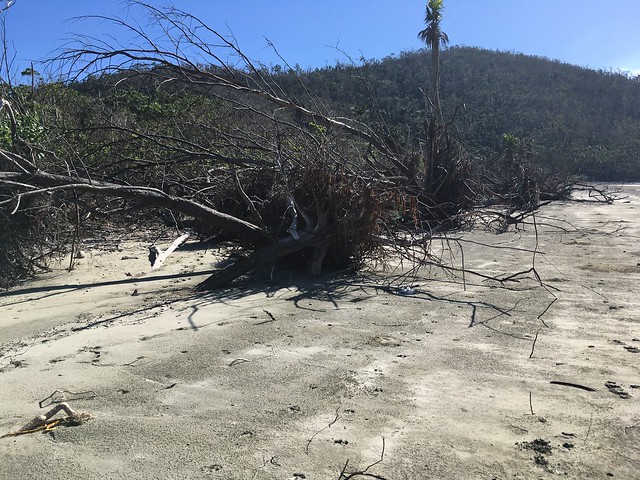 M, armed with a pig-stick, wandered further down the beach and discovered the creek he had read about – so big that we could have taken Bella Luna down it at high tide. We poked about hither and thither, until the tide necessitated our return to Foamy – it was going out so fast we didn’t have time to put all the rubbish in a bag, but just had to throw it in the bottom of the boat and push until we got out of the sandy shallows.

By about 3pm we had arrived in Stingray Bay at Goldsmith Island, an anchorage that is only tolerable in a northerly, and as the winds up here are more often south easterly trade winds, we were happy that a northerly was forecast so we could take advantage of it.

Basically, our passage south will be dictated by northerlies – apparently they don’t really kick in until later in the year, which is why most cruisers wait until then to head south. But not us! We (that is to say “I”) want to get to Tasmania ideally before summer officially begins.

So we chase the northerlies. Back to Goldsmith Island. There were two boats already anchored there (this is the problem that comes with everyone consulting the same cruising guidebook that describes the bay as ‘magnificent’). It actually is. 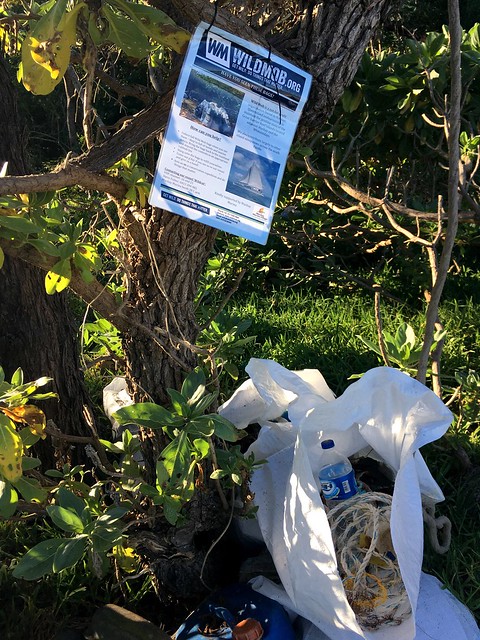 When we got ashore we saw these bags and a laminated sign that introduced us to the work of the WildMob – you should check out their work and their volunteer program. They use the same white rubbish bags as we do – we had no more room on Bella Luna for rubbish, but collected quite a lot and put it in these bags that were waiting for someone with more room than we have to take them away… 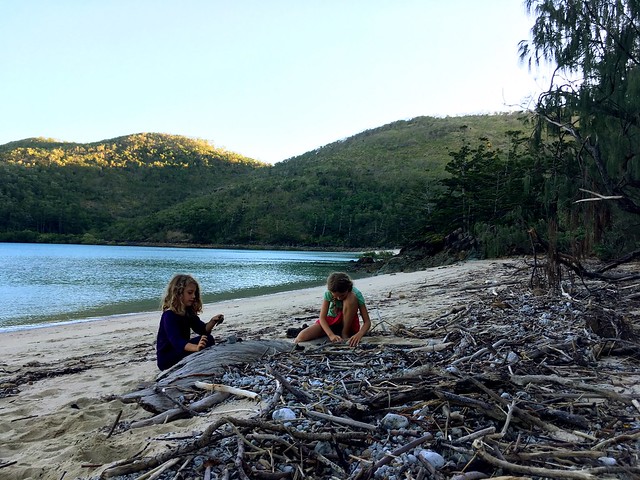 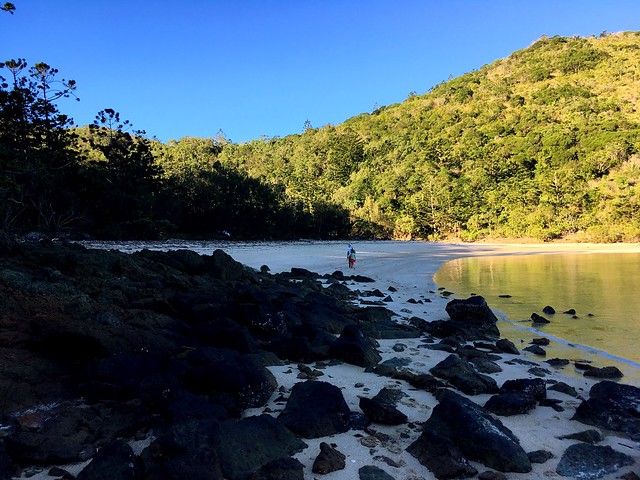 We met a couple of guys from a catamaran called Even Keels and were able to tell them that we had happily drunk a gin and tonic aboard their vessel when we were in Hobart!! It is a boat that has about six different owners, and it’s always on the move – a cheaper way of accessing a very expensive boat! 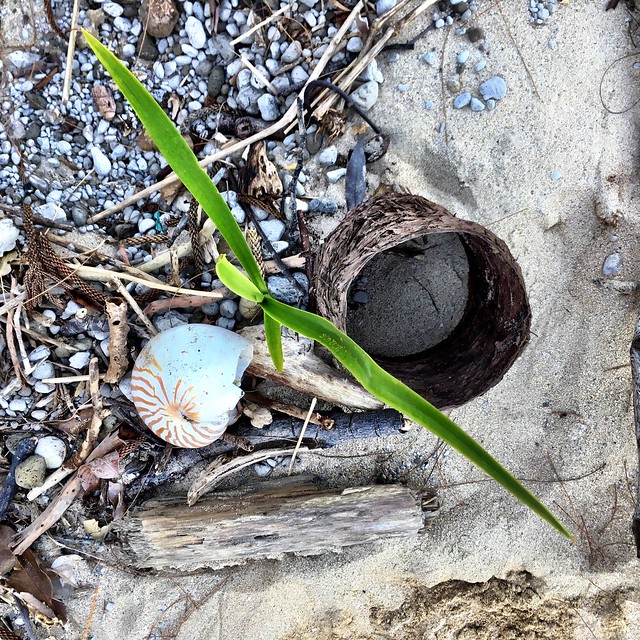