We hoped to spend a couple of days at Hill Inlet – a spot at the back of the famous Whitehaven Beach (one of only seven silica sand beaches in the world) that is generally only accessible by multihulls as the water is very shallow.

In some places the water dries out – and we were hoping to take advantage of this, because our craptastic antifoul is now barely existent and we need to scrub the hulls.

M also has to fix a plate under the starboard motor and replace the through-hull thingy – all things that can be done far more easily without being afloat.

Getting into Hill Inlet was a little bit epic – the day was overcast, with chunks of fleeting sun, and the sea was messy – we were therefore unable to see the channel that snakes its way among the sandbanks into the calm of the inlet. 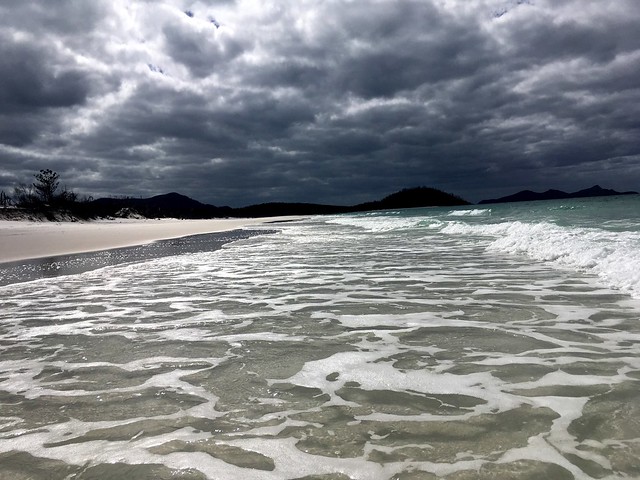 Thus, there was some tension between the captain and first mate, which was gently compounded by us running aground. I had been warned repeatedly to be ready to spring like a panther and raise the centreboards if this occurred.

It seemed that in order to dispense with any of the sailing terminology that might befuddle my brain at a crucial point… therefore, instead of shrieking, “STARBOARD!!” as our hulls met the sand, he screamed, “RIGHT! RIGHT!!”

Unfortunately this led my brain, for a few crucial seconds, to cogitate on the rightness of things. Did he mean I was, finally, right? Had I misheard? Were we alright?

He meant starboard right. Pantherlike (except for my reaction time) I sprang to the centreboard line and yanked it.

“Doesn’t matter,” panted M tersely, who had whacked the motors into reverse. “We’re off…”

Our second attempt to enter the inlet was more calm and measured, and we squeaked our way in. This… THIS was what I had expected the Whitsundays to be like. White white sand, sparkling blue water, stingrays scudding about, and only two other boats in the anchorage. 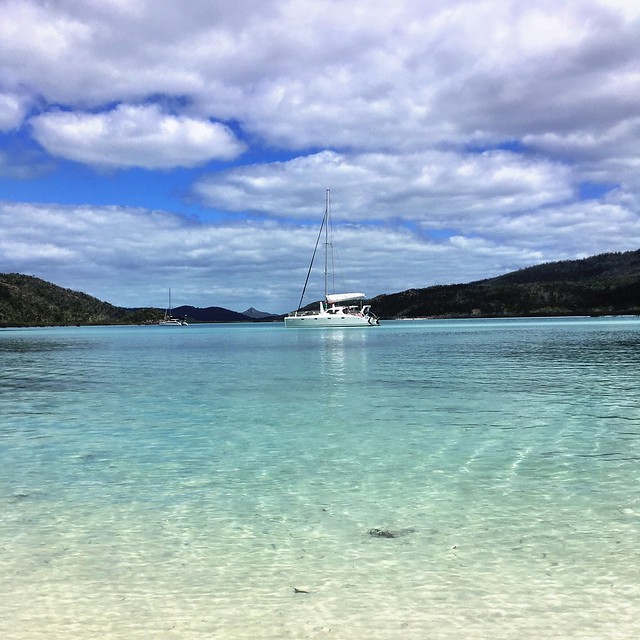 Poor Small DB was crying at the awesomeness of our surroundings. “I want to SWIM!” she wept. But she was not allowed to get her leg wet – still healing. I had all sorts of good resolutions about keeping her company and not swimming, but I am weak – it was too hard to resist. 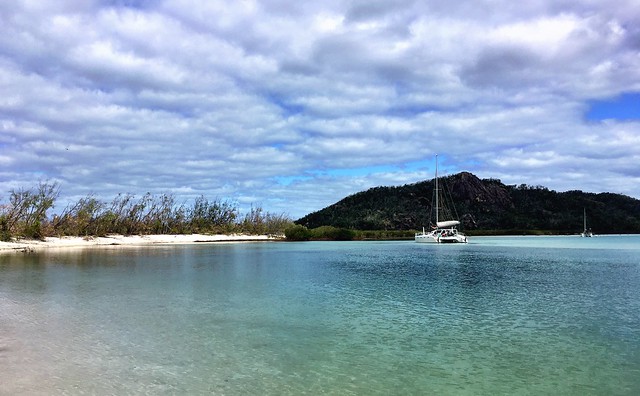 We ended up remaining at Hill Inlet for about five days. I cannot overstate how good it was to Stay In The One Place. Not only that – we dried out every day, so it was easy for the Smalls – for all of us – to get on and off the boat. 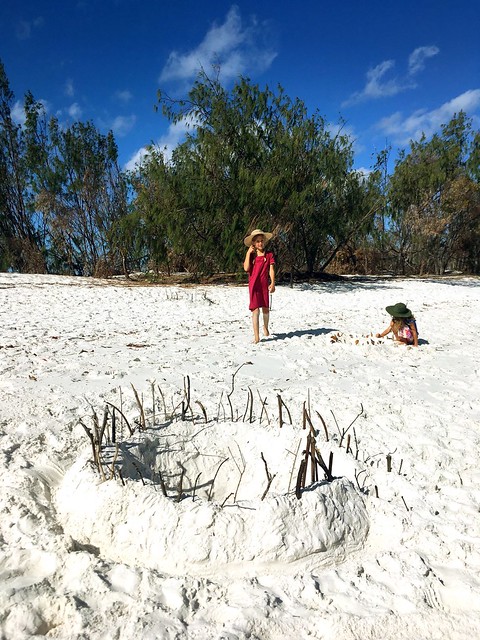 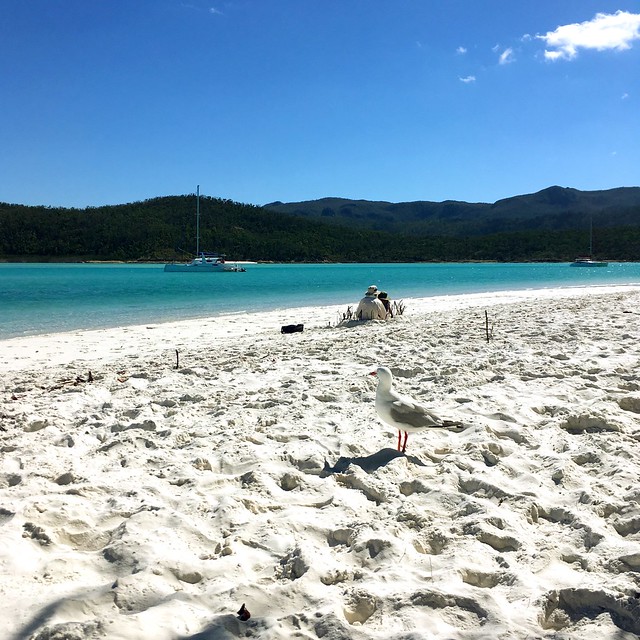 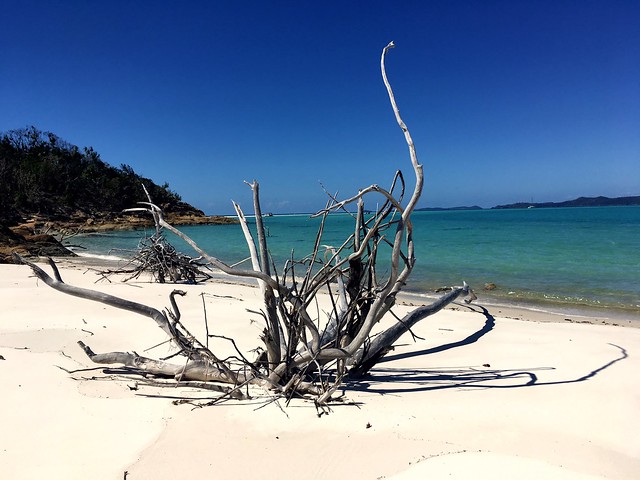 In addition, we were able to clean the hulls. Most importantly, I was able to read, wander, explore without the feeling that we were about to lift the anchor and sail on to the next spot some time in the next 24 hours. This excellence was heightened by M having Things He Needed to Get Done, and thus not chafing about me having boat-time (i.e. not exploring my surroundings)… 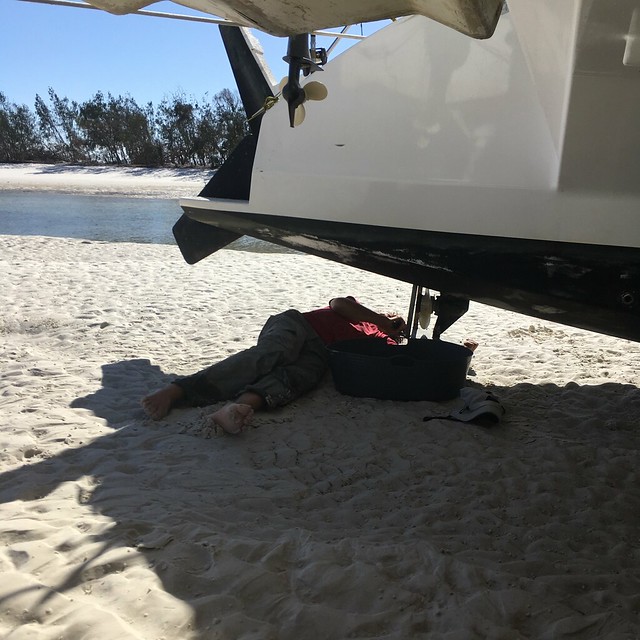 We had one boat raft up to us for a chat – something that we hadn’t experienced before. The boat was Eagles Wings – we enjoyed meeting Doug and Rosie and had a cup of tea on their boat. And we met our second boatcat – the 14 year old Dixie… 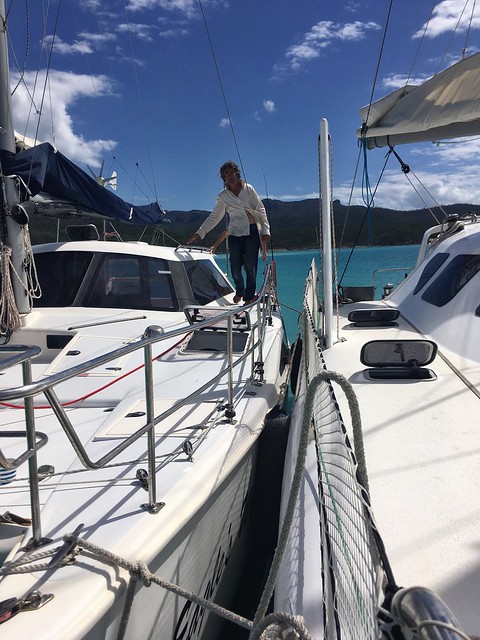 After they left, we were alone in Hill Inlet for about 24 hours or so – not realising that this was in any way unusual, but relishing it all the same. M, who had gone for a Solo Manly Adventure in Foamy the previous day, had discovered a lookout, and took the Smalls and I over to see it for ourselves.

It was TOURISTLAND over on the beach where the track to the lookout began. Lots of different languages, different degrees of sunburn – I have never travelled in a group, and so I forget that this is what some people do.

They were brought to the beach in power boats, and then guided up to the lookout in lots of about thirty. Besides the fact that we were all mammals, the other thing we had in common was an appreciation of the vista. It was an extraordinary view… 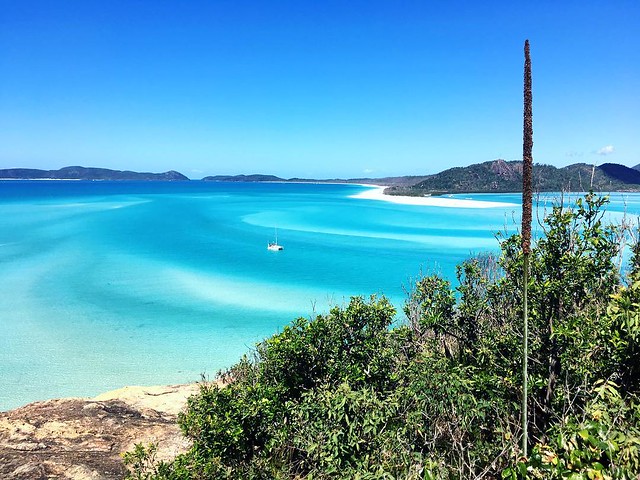 We could see Bella Luna in the distance, alone in Hill Inlet. I looked over to the left, where the channel we had found so hard to navigate was perfectly obvious with the help of clear skies and barely any breeze. There were FIVE catamarans there, waiting for high tide.

Sure enough, by the time we had returned to Foamy and were investigating a little beach a bit further down the channel, all the catamarans were making our isolated wonderland into a multiple multihull meetup. 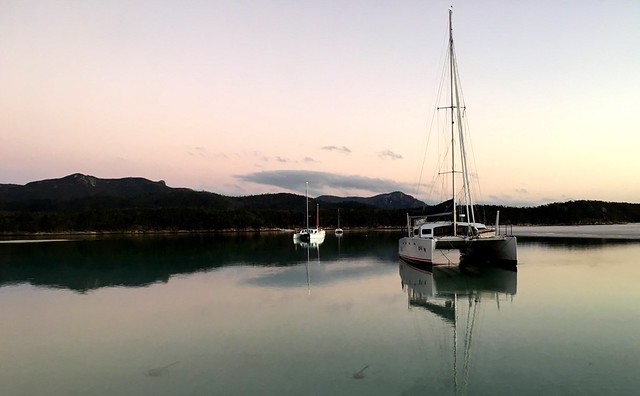 Over the following days we met Tania and her cat Captain Jack Miaow from the boat Somewhere, Phil and Faye and their cat Nobby on their boat Jigsaw and Jenny (with no cat) aboard Slim. I actually became something of a labrador one morning – M had gone off to scale yet another mountain thing, and the Smalls and I visited Jigsaw, where I interviewed Faye about the logistics involved in bringing your pet back into Australia. I also confided in her about Small DB’s upcoming birthday and our lack of oven.

“Oh,” she said. “Go over and see Jenny on Slim – she doesn’t have an oven, but she makes wonderful cakes!”

We scampered down the beach toward Slim and found Tania already in residence. I was given a cup of tea, the Smalls were plied with lime cordial and a GF ginger biscuit. Jenny very kindly schooled me on how she makes successful cakes in a heavy bottomed saucepan on her stove. Huzzah! It CAN BE DONE!

To top it all off, our friends and neighbours from the lagoon on Middle Percy Island XX showed up in their boat, Easy Rider with Small DB’s favourite entity – their little white poodle called Pippie. We had a fire on the beach together and ate marshmallows… 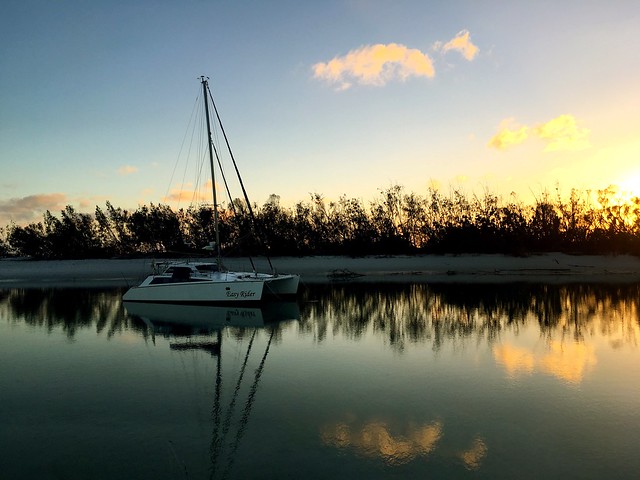 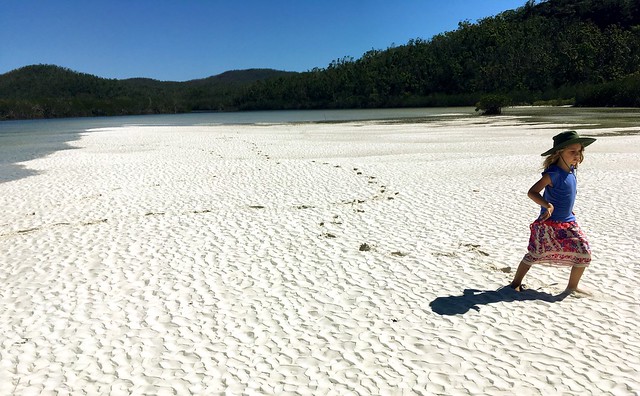