Five days in Airlie Beach was enough. M fought the toilet and won – although he was literally sprayed with shit three times during the process. Bella Luna stank like a sewer and the Smalls and I tried to make ourselves scarce.

The toilet itself wasn’t the problem. The pipes had gradually built up layers on the inside until there was no space for anything to pass through. 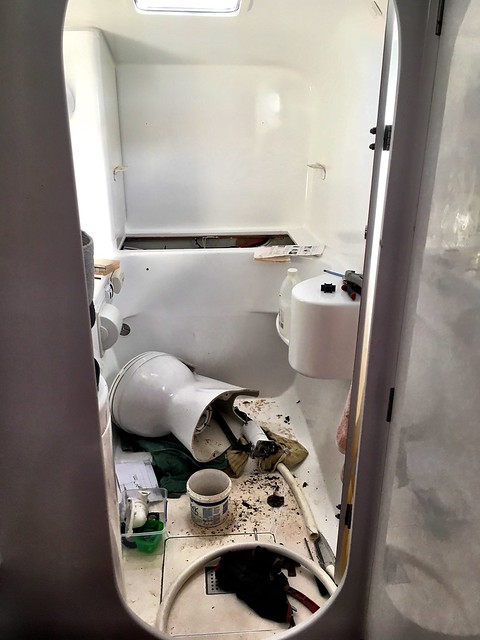 The Saniloo was also unhappy – because the outlet pipe had calcified via a mixture of salt water and waste and had blocked up. This had led to us over-stressing the system, breaking the impeller and M had to replace ALL the pipes and the three way valve to the holding tank.

However, it should be noted that the toilet has been in use for almost three years, so we haven’t done too badly – we just need to be a bit more preventative to try and avoid the situation recurring.

We stayed around for the Saturday market – M got up early and bought fresh beans and six big bunches of basil. We did our Woolworths provisioning shop – filling two shopping trollies – and the following morning headed out of Airlie Beach for the last time, having topped up the fuel and water. 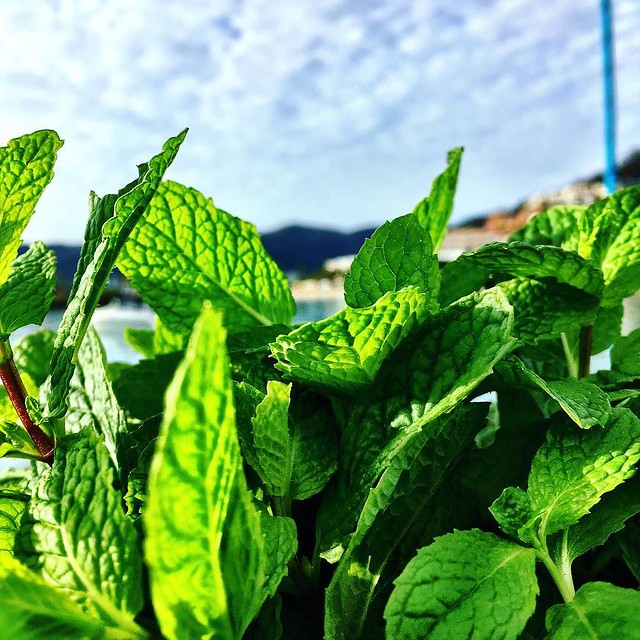 There was zero wind. I hate zero wind. Because it means we motor. Thus, we motored all the way to Nara Inlet. Had lunch, went ashore to look at a shipwreck… 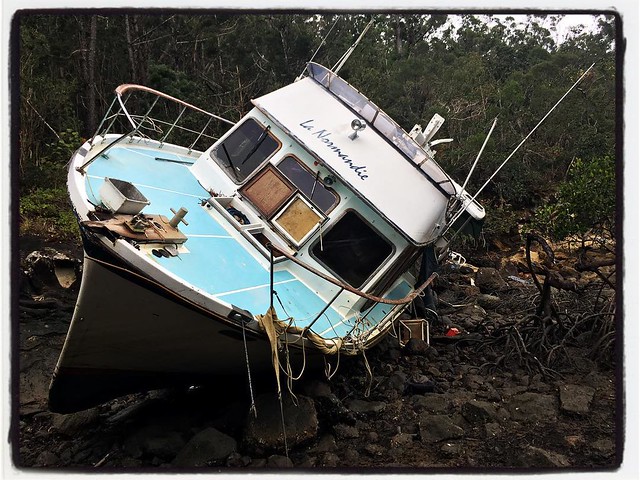 Then Small DB slipped on a muddy rock, fell over and had her leg sliced open by an oyster shell. Ow…

Five hours later we were back in Airlie Beach, having motored all the way back. I had spent half an hour cleaning Small DB’s laceration – it was deep and ugly – like she’d been slashed with a Stanley knife. Our cruising guidebook did not mince words on the topic of oyster cuts; “almost a 100% rate of infection” – so I had her at the medical clinic at 9am the next morning (a Monday).

The wound was examined and cleaned. Too much time had elapsed to stitch it up, so she was given a prescription for antibiotics and instructions to keep it clean and not to go swimming until it had healed. (Oh, that is going to be soooo easy. Not.) 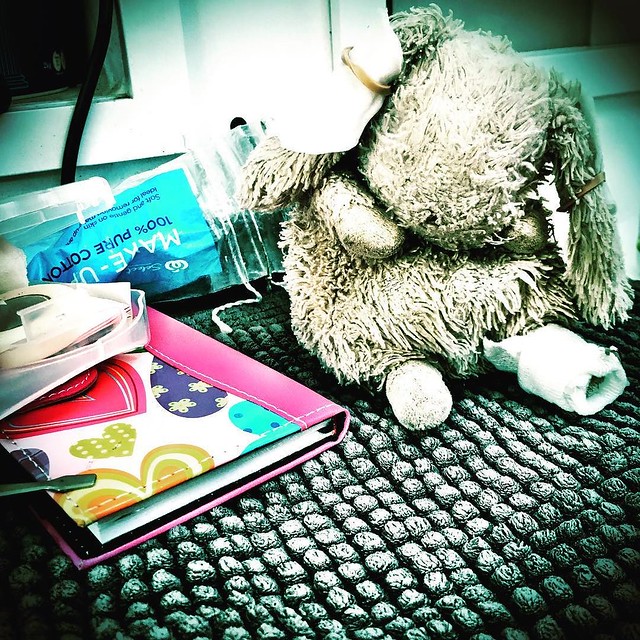 We stayed over in Airlie Beach that night, which led us to spending more money on stuff we had forgotten (not enough cheese, more bananas, Small Z’s shoes, antibiotics)… 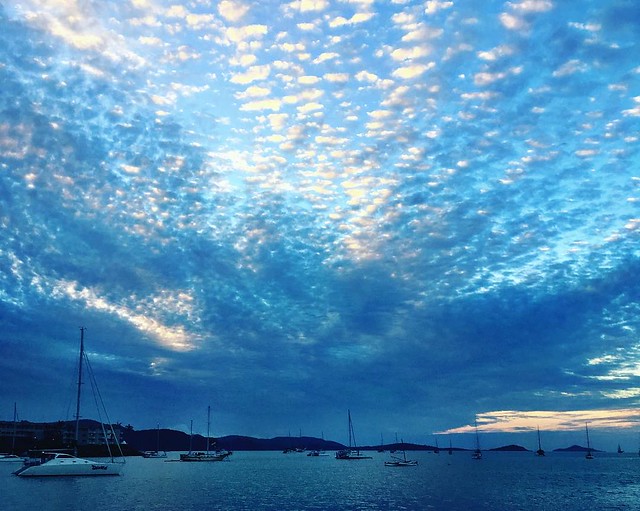 We left the next day, saying yet another goodbye to Airlie Beach…

The journey back to Nara Inlet was a vast improvement – we were able to sail – although it was significantly put-away-anything-that-might-fall-over bouncy.

Nara Inlet is quite protected, and very very beautiful. As we motored ashore, first boat we saw was Sarah McGill – I had been in contact with Ann on the #WWSA Facebook group – our boats were in Airlie Beach at the same time and she had posted that she had a 7kg furball aboard – a cat called Captain Jack.

Once I’d mentioned this fact to the Smalls, they were obsessed, looking everywhere for Sarah McGill – now that we’d stumbled upon her, there was no diverting them. (Or me – I wanted to meet Captain Jack too…)

“Ah!” said someone from the cockpit, “We’ve been expecting you!”

We were very kindly invited aboard, and stayed – probably for too long – but it is always lovely to meet a boat pet, and we could have talked for much longer to Ann and Peter, who not only built their own boat, but design them and have been cruising the Whitsundays for 40 years.

Back when they first came to Nara Inlet, it was a scramble up the cliff to get to the cave with Aboriginal paintings. Now there is a walkway with signage and even recordings you can listen to – stories from the Ngaro people, the owners of the land. It’s quite excellent. 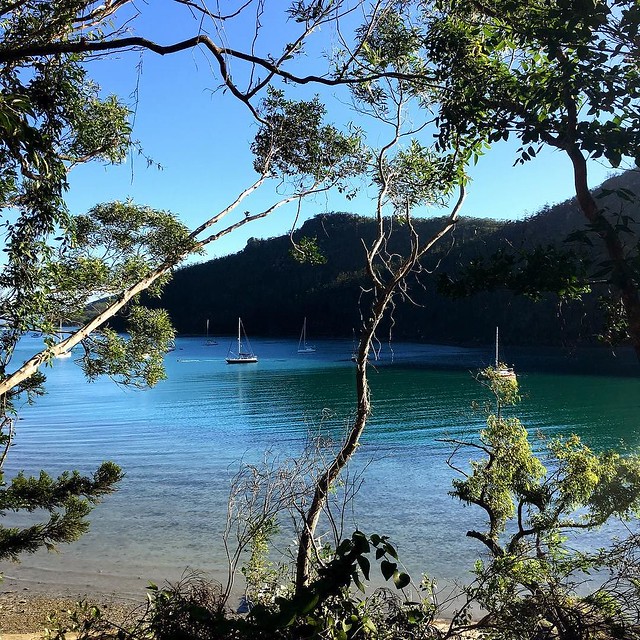 The next morning we waved goodbye to Sarah McGill and a bit later, we headed out as well. 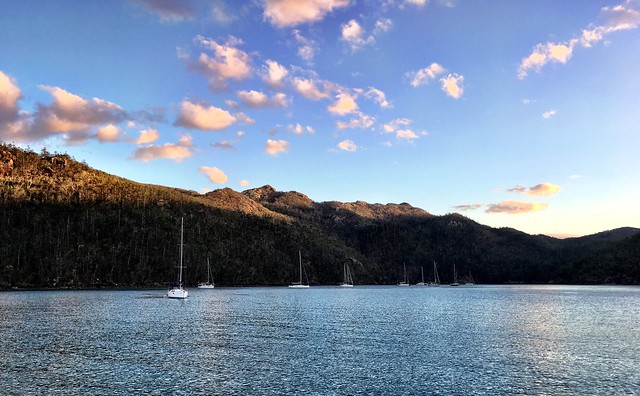 It was like going from a quiet massage room filled with birdsong and zen to front of stage at a NoFx gig. It was like being back in Bass Strait near Flinders Island. Messy, chaotic.

We were, however, making good progress. M was aiming at Sawmill Bay – he told me it would be better to go there for a night instead of battling all the way to Hill Inlet. This was probably true – but it was also true that he had the ulterior motive of climbing Whitsunday Peak. Either way – I was keen to pursue the route that would return us to relative calm as soon as possible.

I lay on the floor on the beanbags, getting up to hel ptack whenever required. M, teeth gritted, sailed onward – every fibre of his body quivering with sailing-joy. The Smalls, eyeballing their iPads, barely looked up as Bella Luna whacked her way through choppy seas.

The difference between this sort of journey and the more epic Bass Strait kind of journey is the knowledge that it’s going to be over in an hour or two, rather than persist for another day and night.

We said hello to a few whales before arriving in the calm of Sawmill Bay. It was as if half the occupants of Airlie Beach had magically relocated there – M counted about 40 boats. We performed a marine version of my friend Jen’s parking philosophy (possible lifted from George Castanza) – go straight to where you want to be, and work outward from there…

Startlingly, a power boat was pulling up its anchor, and we slid into its spot as it departed. Perfect. I took M and Small Z ashore to scale Whitsunday Peak, while Small DB and I stayed on the boat (M hinting desperately that we go ashore and explore a bit).

Instead we got out the sewing machine, that then required fixing…while Small DB grew increasingly impatient and irrational with the dress she was trying to sew for bunny and we both melted down from there. ?