Scuppers, the treehouse and Tasmania

From when I was tiny I loved the Little Golden Book called Scuppers the Sailor Dog – about a dog who was ‘born at sea in the teeth of a gale’ – and his adventures. At one point he gets shipwrecked on a desert island and builds himself a little house from driftwood… Both the A-Frame and the treehouse remind me of Scuppers…

When they’re not keeping the A-Frame tidy and explaining to people like us how to husk and spike a coconut, they are making mudbricks for their pizza oven, tending their garden, composting, fishing…

On our first night here we swopped them some potatoes for a fresh coral trout. The next day we bartered more spuds and some apples in exchange for some passionfruit. They fed us startling tasty rolls of grated cava root, coconut and honey that were bound in a banana leaf – beyond delicious. 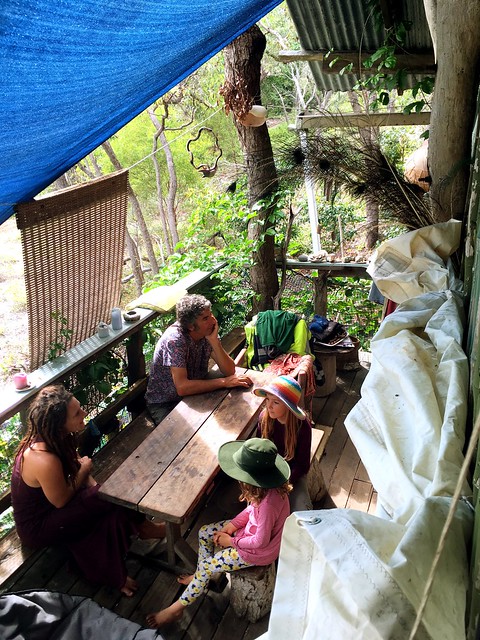 They have been kind enough to let us into their amazing dwelling – make us coffee – give the Smalls lessons in clay modelling – and tonight they are putting a goat stew on for anyone who wants to come along. Goat. Maaaaaa!

Both the goats and the palm trees were put on several islands up along the Queensland coast many years ago to sustain shipwrecked sailors while they waited for rescue. We have been eating coconut every day and tonight – yes. Goatland. Of course, the Smalls and I can’t eat the stew for fear of gluten contamination, but they are putting some aside for us and we’re going to team Billy Goat Gruff with some jacket potatoes done in foil in the fire. 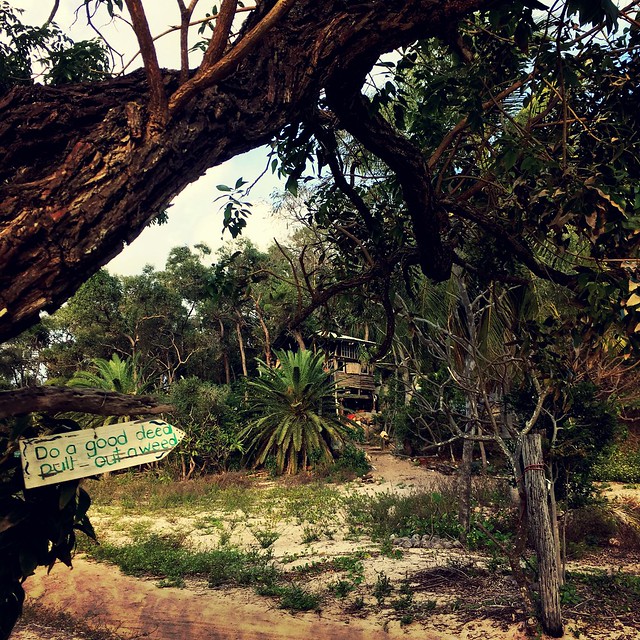 We have been able to get about 40 litres or so of fresh water which runs off the roof of a little shed into a tank. And some lovely people we met in Lady Musgrave Island have let us buy some of their diesel to run our stove – so we are able to hang out here a bit longer, although we’re getting down to tinned food and chickpeas. And cheese. But coconuts fill the gaps. 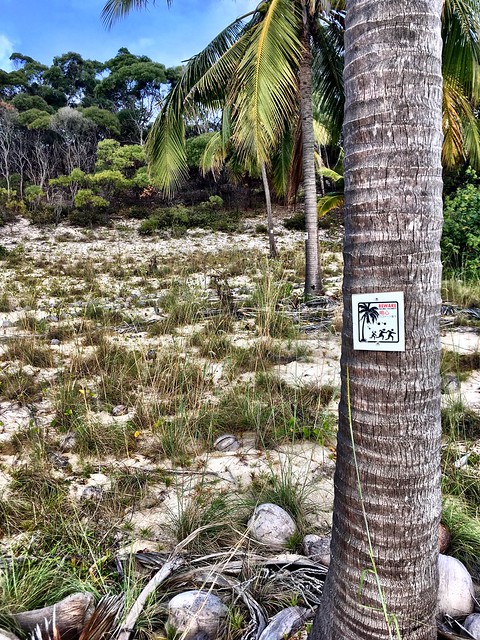 Today is exactly two months since my birthday – it feels like a year has passed in eight weeks. Two months ago we were tied to a pier in St Helens in Tasmania, waiting for a weather window to see us safely across Bass Strait. We had celebrated my birthday the night before, and then celebrated again at breakfast, joined by our potential crew member David the EggMammal – who we had met on that very pier.

In the late morning of the 2nd of May we set sail and did not touch the ground again until tying up at Bermagui in the south of New South Wales. From there we stopped in at Jervis Bay, Sydney, Pittwater, Coffs Harbour, Yamba, Byron Bay (one night), Tweed Heads, Moreton Island, Double Island Point (one night), Fraser Island (one night), Hervey Bay, Maryborough, Hervey Bay, Lady Musgrave Island and now – Middle Percy Island.

Over eight weeks, powered by the wind, we have made our way up the east coast. With our progress has come the realisation that we really did the hard stuff first. In addition to our general inexperience (as Bella Luna had never been in the water before) the sailing was much more demanding – more tricky.

It’s possible (though maybe not totally probable) that had we headed north when we left Refuge Cove in Victoria, we might not have decided to go to Tasmania at all. The east coast might have been the measure of our experience – in the last weeks we have certainly met several people who are happy to cruise the east coast, but blanch at the thought of heading south to Tasmania.

Many times I have offered mental thank-yous to Phil and Stewie Hames (from the boatyard, where we knew them for the ten years we were there). The day before we sailed away they not only told me to keep my 5kg bag of rice, but urged me to head to Tasmania rather than New South Wales. I am so glad I heeded them.