Anchorages Conversations Cruising
by beth on Sunday, May 28, 2017

It’s a bit of a tug to drop in at beautiful places like Refuge Bay and then leave after a night, but we are comforting ourselves that we will have time to explore when we noodle our way back down the coast. And I mean NOODLE. Once we got out to sea, leaving Pittwater behind us, the sailing was fantastic. 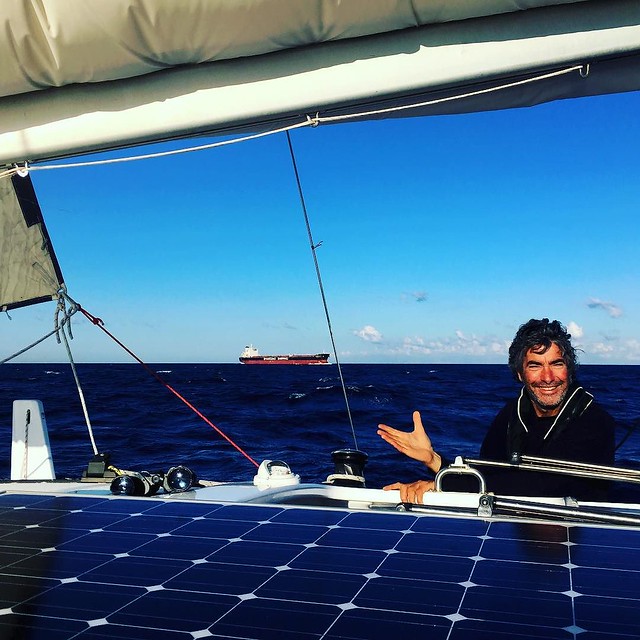 A mutual comprehension has dawned in M and myself – sailing is SO. MUCH. EASIER. when the weather is warmer. Being cold seems to add an extra layer of difficulty into an already (sometimes) difficult situation. 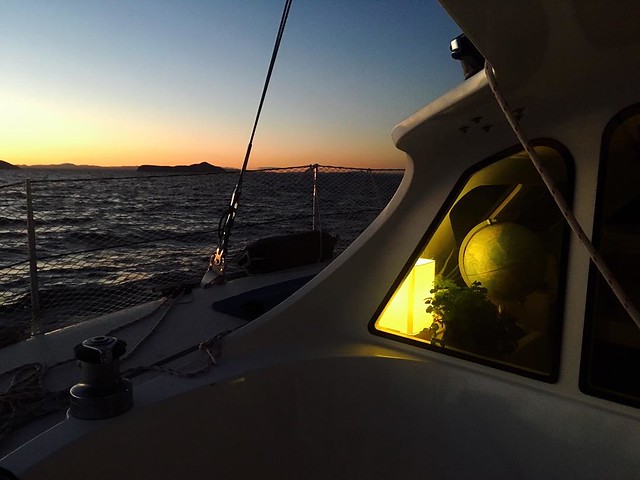 The wind kept up until the late morning on Thursday 25 May. As it eased off, we checked the forecast and it looked like very light winds for the rest of the day – we would be making little progress if we continued, so we pulled into Trial Bay. We had travelled 201nm in just over 24 hours. 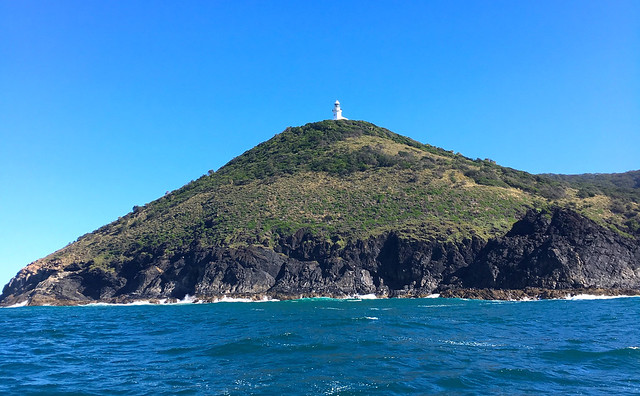 South West Rocks is the town that is at one end of the bay – a town that looms large in M’s childhood. His uncle had a trawler that operated out of the creek near the town and lived in an old fibro home near the pub and grew his own tomatoes. He once held the title of ‘Best Beard in Town’ for his luxuriant chin tresses…

We anchored in Trial Bay and jumped in Foamy to go ashore – M headed us gallantly toward the creek across the bay. There were quite big waves waves breaking on to the shore – we looked vainly for the creek, but it was gone! There were large earthmoving machines around where the creek empties into the bay and no way of landing…

We tried to get close to the shore to investigate further, but the breakers were quite intimidating. M, I knew, was hankering to get to shore. We headed back down the beach, away from the town, to where the waves breaking on the shore seemed a little less savage.

M timed our landing attempt…and was largely successful. Foamy was a little bit swamped and about a third full of water. M and I were lightly soaked and the Smalls, who we basically threw ashore – landed on the sand and were barely wet at all. Despite the dramatic landing, it was still good to BE ON THE GROUND.

I held the nose of the boat and M bailed. In between waves we endeavoured to fit the wheels on Foamy for the first time – it was too heavy to drag up the beach without them and we had to get away from the waves. The waves. The waves paid us no heed as M lifted one side of Foamy and I tried to slot the wheels in…

We eventually began pushing Foamy out of the water and up the beach. It was hard work – I was at the back and M was pulling at the front. Of course, at that crucial point there was a shriek from the sand – Small Z was jumping up and down, a forlorn looking Small DB behind her.

Getting the dinghy up on the sand was (sadly) more important than the tiny little tooth. M and I were making progress. Some bloke walked past and nodded a greeting…and KEPT WALKING.

We kept at it, and finally got Foamy up and away from the water. I found a tiny container in my bag the perfect size for a tiny tooth, and we all marvelled at the newest gap in our gappy.

Feeling like we were brave and intrepid, we headed up into town and did some exploring. I went into the post office to withdraw some cash and got a lecture from the man behind the counter.

“Yep. Withdraw some money. Do you come in here to pay your bills, or pay them online?”

“You pay them online. You know what that means? It means less money for the post office – it means the banks are making a profit. Do you know who used to stand here?” He gestured to an empty space next to him. “A lovely young girl. Who isn’t here any more….”

Was she dead, I wondered, or had she just stopped coming in because she couldn’t put up with him anymore?

“…she isn’t here because people keep paying bills online rather than coming into the post office. The banks are profitting and we’d all be better off if…

“Um.” I tried to interupt again. “I actually don’t have many bills, so…”

I thought of the Humber Car Club registration that was looming in the near future. “Well…”

“Everybody needs to pay something. All this…” he swept his arm around, apparently encompassing the entire town. “All this’ll be gone in ten years. Gone. We’ll all be swallowed up by the banks…”

Small DB and I did a quick exit before he could take another breath. By the time I found M again, my brain was flagging from the onslaught. It was, however, soon soothed by the opshop, the little museum and the local craft shop – there’s a lot of crafty people in South West Rocks! Beautiful things!! Quilts, clothes, hot water bottle covers, babies things, bears… 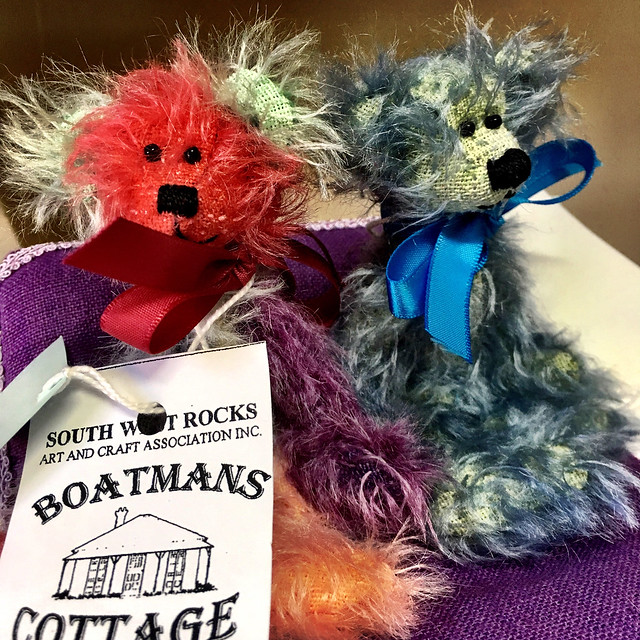 We walked back to Foamy via the park, where there are two excellent flying foxes – which occupied M and the Smalls as I sat in the sun and crocheted on the beach. We timed our departure through the waves with a bit more precsion than we’d done earlier, and didn’t get a bit wet. Huzzah!

Small DB composed a brief letter to the Toth Ferry – and her request was actually answered! The fairy’s name is ‘Cloud’. Small DB then added her own comment, in great appreciation. 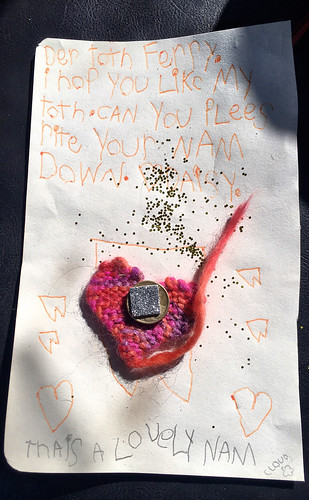 M was up at 4.30am and had us underway within the hour. We were heading for Coffs Harbour… Late morning, the wind dropped out, leaving the sea glassy – and we saw our first dazzle of dolphins since leaving Tasmanian waters. They were smooth, effortless, and so so fast. Because the water was so clear, they were incredibly photogenic… 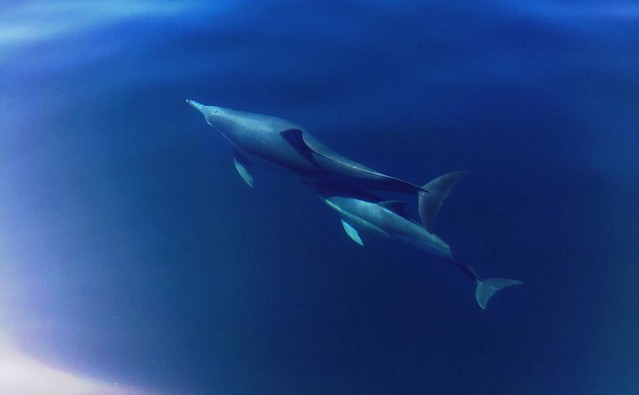 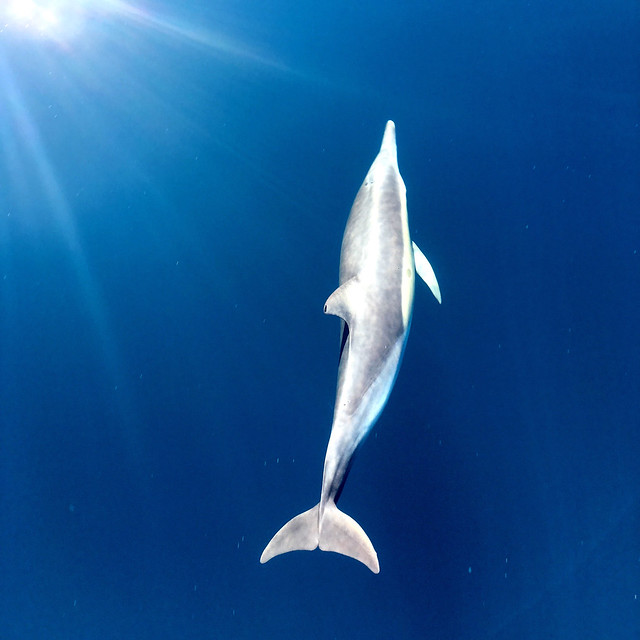 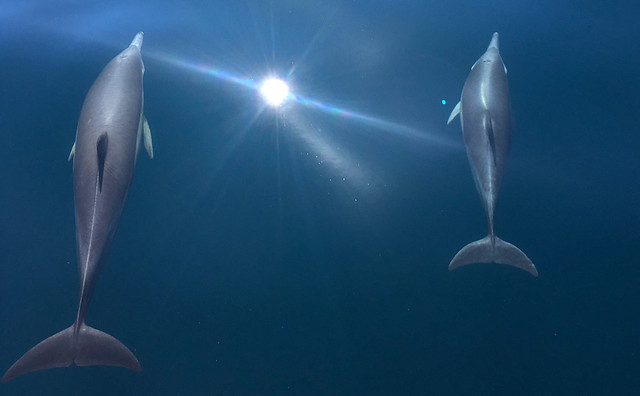 We pulled into Coffs Harbour late in the afternoon, anchoring in the outer harbour near the old wharf. This had happened on the way… 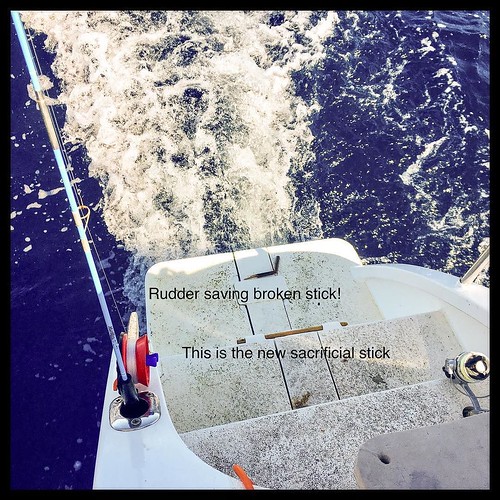 A few boats we’re acquainted with had gone to Coffs Harbour as well, but they’re a bit more moneyed than us and stayed at the marina. We immediately went ashore in Foamy to poke about a bit before the sun went down…

We discovered a stupendously well supplied IGA supermarket, a bottle shop, Telstra Air wifi and a few other bits and pieces. We bought me some GF beer I had never tried – Wilde – and it actually TASTES LIKE NORMAL BEER!! *revelation* We scooted back to Bella Luna before dark – the anchorage was a bit rolly, but I comforted myself that it was keeping me in shape for heading back out to sea.

Coffs Harbour. Hmmmm. I’m still not really sure what to make of it. The area around the marina was lovely, but it was a very big walk to get into town – and once we got on to the main drag it was all very bling, but fairly deserted. It was much more ‘city’ than seaside town. Quite a few shops in the big shopping complex had closed down…

It felt that maybe Coffs Harbour had begun as a town around the harbour and some bright spark had decided to head about four kilometres inland and urbanise it to the hilt. I guess that we walked so far along the main road to where the big supermarket was that we didn’t get to see much of the more lovely part of town, except the area that is called Coffs Harbour Jetty. 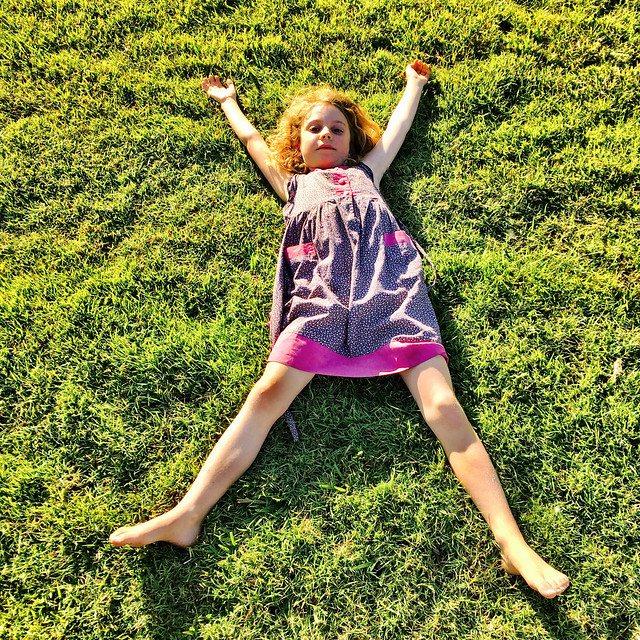 Our fatigued state was not helped by the discovery, when we got back to Bella Luna, that the autopilot had staged a revolt in our absence and now would not work. The Ubiquiti Bullet antenna had stopped working properly as well, and then I went to turn on the generator and the starter cord snapped off in my hand. 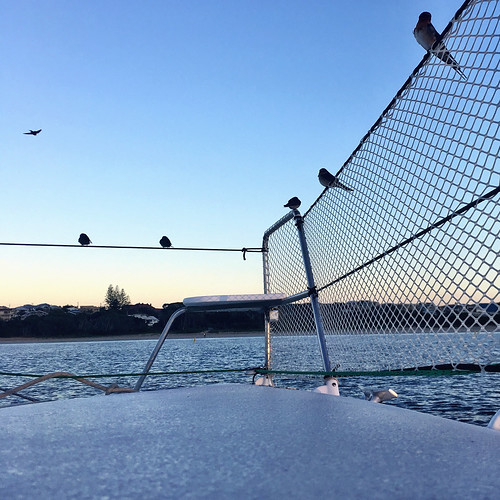 The following day was rainy and the Smalls and I elected to stay aboard for the morning and get our craft on – while poor M had to traipse back into town (he got the bus one way, which helped somewhat) and try and get 5amp fuses and some electrical contact cleaner spray. He was successful – and walked a different way back, which he said was actually quite splendid.

We slept, that Sunday night, to the sound of DOOF DOOF DOOF DOOF from a nearby dance party. We would have liked the opportunity to use one of the two 24hr courtesy moorings, but the two yachts that were hanging off them had not yet looked up ‘courtesy’ in the dictionary and had been there for at least two days. Fuckers.

Not having an autopilot meant that we weren’t too keen to do any more long journeys. Early Monday morning we embarked for Yamba – a place I have been before and loved. Coffs Harbour disappeared in our wake, and I wasn’t particularly sorry.