Belatedly, I have realised that the area we are in is called the ‘Northern Beaches’. A few years ago longtime friends of our disentangled themselves from Melbourne, where they’d lived for more than 20 years, and upped and left for Narrabeen – which is apparently not too far from here. Their move perplexed me – but perplexed no more! I would probably up stumps and move to Manly right about now – it is truly delightful.

We motored over from Blackwattle Bay on a bit of a whim, having found out that there were five public moorings here near the ferry terminal.

“No way will any of them be free,” M declared, steering us through Sydney Harbour as ferries and flashy speedboats weaved around us. “If we get a mooring at Manly I will officially decide that Sydney TOTALLY ROCKS.”

I had a bit of a quease going on, so just nodded politely, eyes on the horizon. Half an hour later it was officially decided that Sydney does indeed TOTALLY ROCK. Two of the five moorings were free. It’s not as protected as we were in Blackwattle Bay – there’s a bit of a roll, and this is accentuated by the ferries that are constantly coming and going, however…it is MORE than worth it. 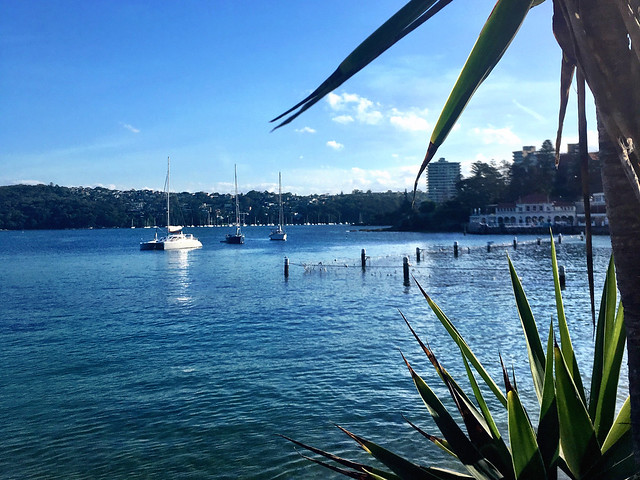 Once we got ashore, we had only walked about 20 metres when I saw a boatish looking person striding toward us. He was carrying a 12pack of organic long life milk. In a manner far more reminiscent of M than myself, I intercepted him;

“Hello. Where did you get that? Do you live on a boat?”

Arms full of milk, he nodded his head in the direction he had been coming from. “There’s an Aldi just in there,” he said. “And yes, I do live on my boat. Manly is a great place to do provisioning. There’s a Coles supermarket just down there.”

I was staring at him with huge, bright, happy Tweety-Bird eyes. “Really? An Aldi?”

He nodded, and put down his milk on a nearby bench.

“Where are you headed?” asked M.

We all nodded. “North. Whitsundays. Somewhere we can SWIM.”

We had a lovely chat about the benefits of Blackwattle Bay, and the hitherto undiscovered wonders of Manly, which was starting to glow gently around me. His boat is called Blackwattle and its past life features in this book. It turned out that he was tied up to one of the same moorings as us.

Manly. Although I would have expired if I had not been able to cruise the back streets of Glebe, I am happy to be somewhere that is a bit more accessible – for fun, and for provisioning. And because we visit them wherever we go, here’s a shot of the… L-I-B-R-A-R-Y!! Can you imagine a world without libraries? That would totally suck. 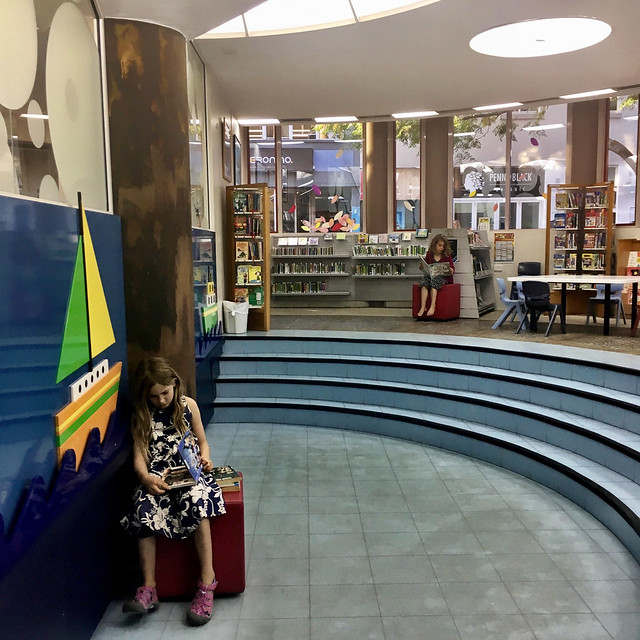 I went op-shopping with a vengance, and found M a waterproof and amazing Columbia jacket (that’s correct, we have sailed in three states and M has not had a proper waterproof jacket – now he does) for $20 and Small Z got a very nice wetsuit for $10 that fits her much better than her last one. 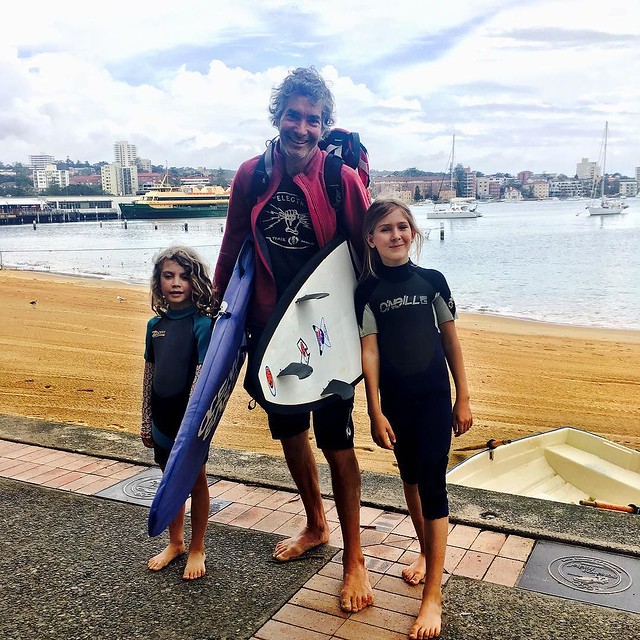 Some of the time while the others were frollicking in the sea, and some of the time accompanied by them, I shopped. I provisioned. I crushed out the credit card in the anticipation of not seeing another supermarket or bulk whole food shop for a few weeks. I’m sure I’ve mentioned before that I feel much more at peace with the world when the two pantries are full. I figure that buying healthy food is never a waste of money, because it will all get eaten – and in the time that we don’t have to shop, I can accumulate some money to pay of the Card of Evil. 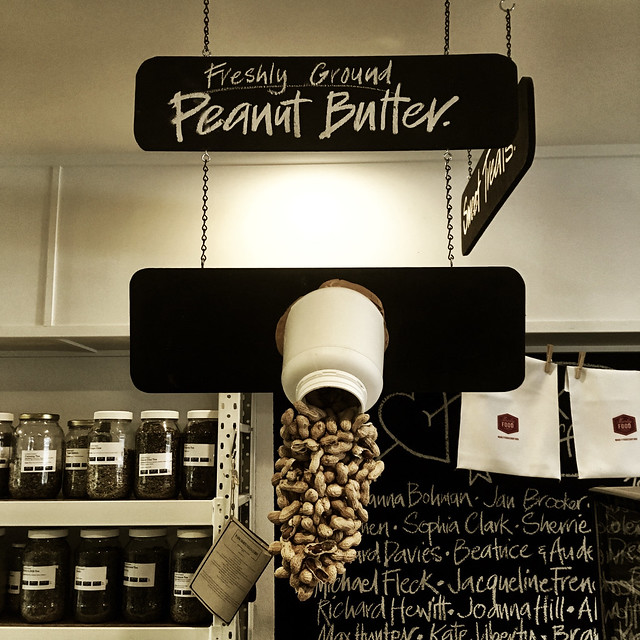 My only complaint about Manly was that I could find no cheap peanuts – in Tasmania we became accustomed to whizzing up our own peanut butter at whim – spread on bits of apple it makes such a yummy snack. But Manly was as devoid of unsalted peanuts as it was NATURE’S CUPPA ENGLISH BREAKFAST TEA. What the HELL Manly??! I went in every supermarket and health food shop and NOTHING… I have had to slum it and buy Nature’s Cuppa Ceylon – which is not the same at all. FIX YOUR TWO BROKEN BITS MANLY. 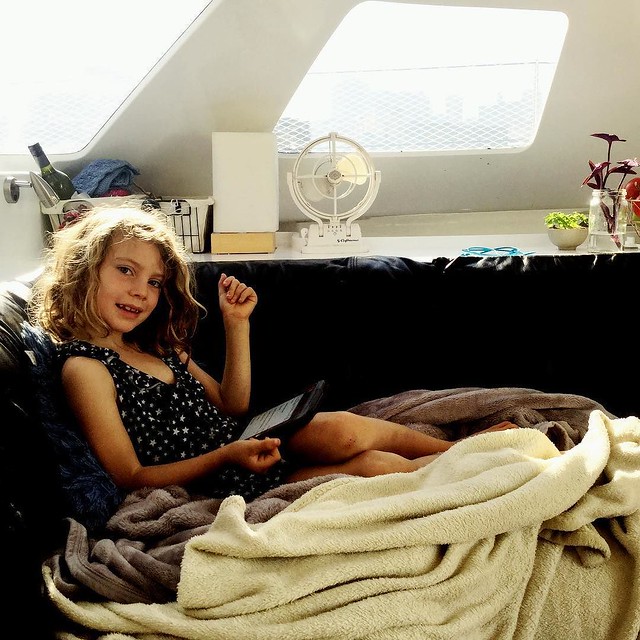 A little landmark for Small DB while we were in Manly was finishing Roald Dahl’s Danny, Champion of the World on her Kindle – huzzah!

There was one afternoon of rain and we visited an excellent exhibition at the Manly Museum and Art Gallery called ‘Human: Child Artist Response Project‘ – a lot of which was artwork by children as inspired by a particular work of a professional artist. 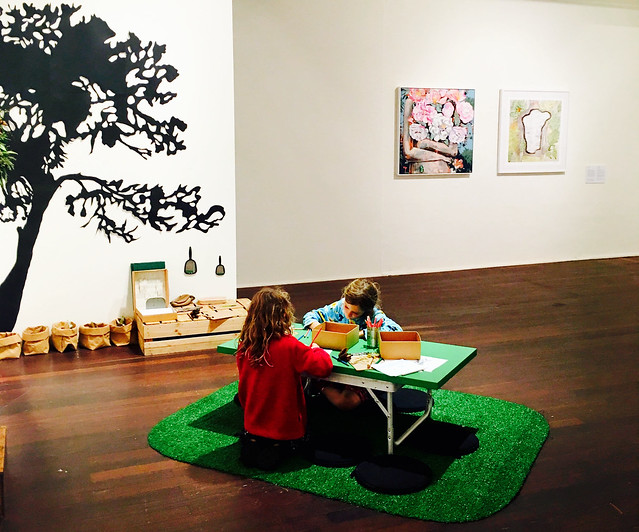 Friday and Saturday nights in Manly were interesting. The place was pumping – or the restaurants and bars on the ferry wharf were anyway. There seems to be quite a bit of money sloshing around here, but a lot of backpackers as well. It was lovely to sit in Bella Luna at night with the doors open because the weather is so mild. A novelty we hope to repeat more often! 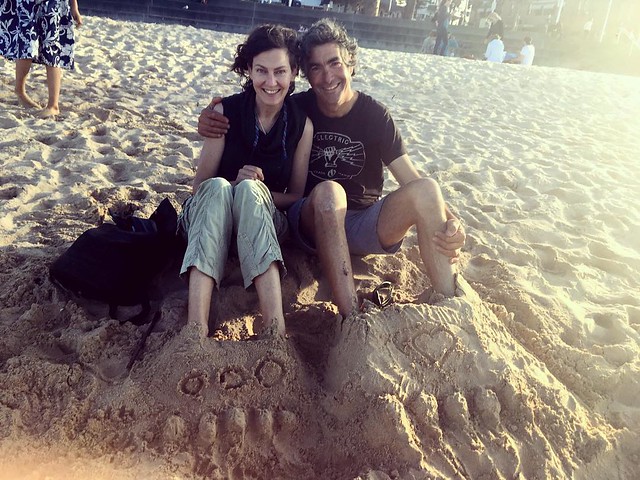