The first of May is last day of my forty-third year. In fact, I had to do some counting to figure out how old I actually am. Two years ago I was in Tasmania for almost a week and it was both fantastic and appalling. I had to say goodbye to my dad the day before I left, knowing I would never see him again. Awful. Last year was a boatyard birthday, and it was impossible for my brain to jump forward and imagine where my next one might be… 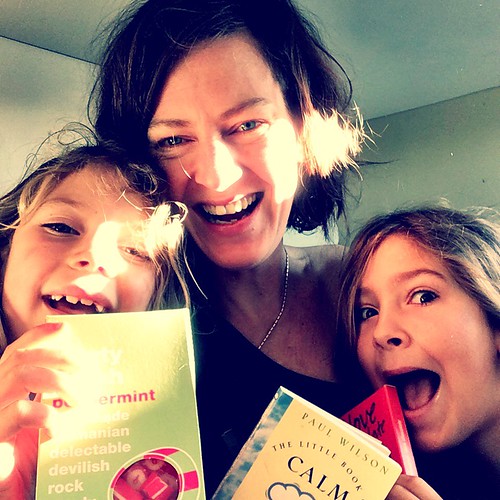 The night before we left St Helens our new friend Dav(id) cooked us a birthday-eve dinner. It was terrifically novel to have someone that wasn’t us in the galley/kitchen while we sang/danced/nibbled in the main cabin – he created a beautiful tomato chickpea rosemary soup and potato rosti – and proclaimed that the latter was the worst he had ever made. We had no objections to it – the Smalls hoovered it up.

There was champagne, GF chocolate cake with mounds of cream and a candle for me to blow out. Joy! A lovely night was had. The following morning – proper birthday-day – David appeared with gifts, and not just for me. M scored a cask of red, the Smalls some chocolate and I was gifted Dilmah tea (which I have since converted to while I’m unable to source any Nature’s Cuppa Engligh Breakfast) and AND a little jar of caviar! What the?!

As a birthday present to my own self, I bought three green plates – to match our others.n Thank you me, and the Life Buoy and Quail St Emporium… 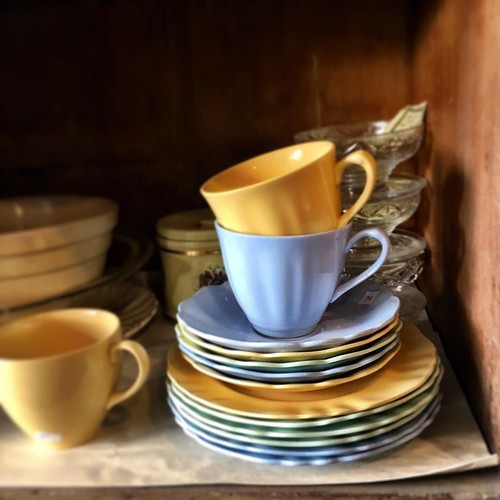 One of the things about cruising – you meet many more people than you would in your normal stationary life, and with some of them you have an instant and easy connection. And so it was not strange that we had Alan (from Amnesia II) singing ‘happy birthday’ to M in Port Davey and sharing cake and champagne – and David in St Helens.

I was sung-at by the Mothership over FaceTime and spoke to Small Brother and SWWNBB. I missed my dad. The Smalls gifted me sweets and beautiful cards, M presented me with a handmade card, a bottle of white, gourmet curry paste, fudge and ‘The Little Book of Calm’. It was a very lovely morning – we paid a final visit to the library to return our books and do some digital borrowing. 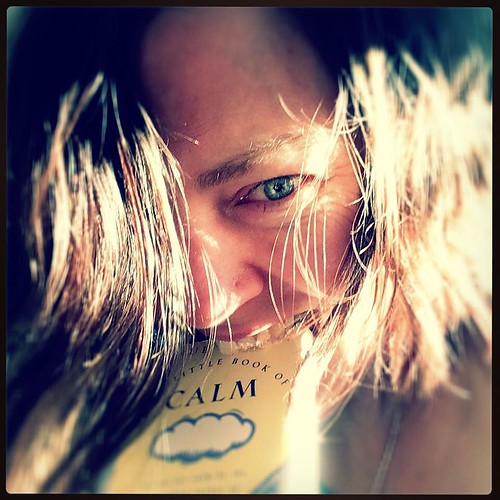 The forecast was holding. At around 2pm, feeling mostly sorted, we had a last cup of tea/coffee with David, said our sad goodbyes and he let our last line go from the pier. We were sorry to see him go – and had offered him a spot onboard to come north with us (he possesses the attractions of seasick-immunity, foodiness and the ability to sing songs about farting with the Smalls), but he had other committments. 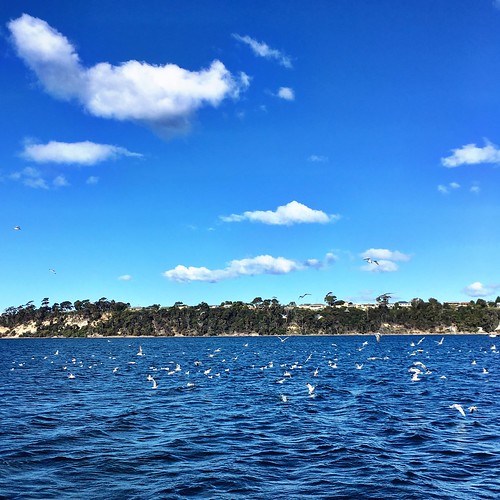 It felt odd to be sailing back out over the St Helens bar. Our six or seven months in Tasmania have been e-p-i-c. I can’t get it into my head that I will love anywhere else quite as much. But the only way I could tolerate a Winter there would be in a strawbale house… If it hadn’t been for the increasing chill-factor, it would have been far harder to leave.

As we looked back behind us, there were splashings and exhalations of air at the front of the boat ( I am aware that anyone vaguely nautical reading this must flinch frequently at my lack of proper terminology – the bow of the boat – the BOW). A dazzle of dolphins threw a party all around us for about an hour, as Tasmania disappeared behind us. I decided that it was a combination farewell and birthday gift. We were away… 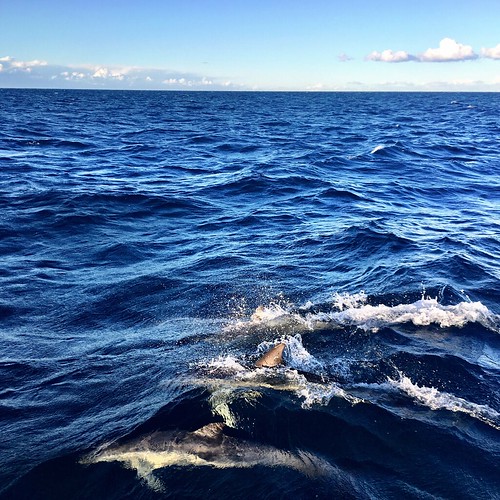 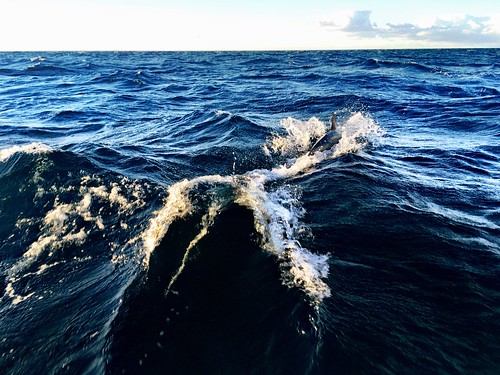 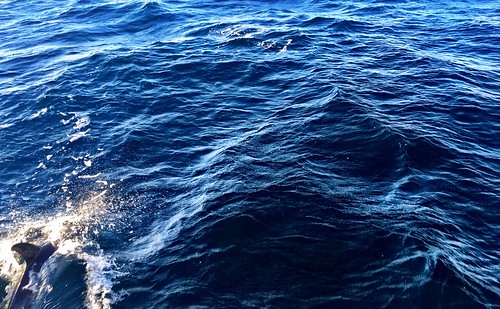 This was our longest passage to date. Our plan was to cross Bass Strait, head up the east coast, and keep going until conditions dictated that we stop. I mentioned in the post about sailing from Westernport Bay to Wilsons Promontary how I had found the experience similar to labour. This was no different.

We started late in the afternoon – the Smalls know the drill. Small Z sticks to my bed, Small DB makes a nest for herself on the couch. M and I got things in order and then I went to bed, leaving him to do the first shift. I took over at about 11pm. Quite honestly, it is all a bit of a blur. M, being lovely, greeted me with a cup of tea.

Already feeling ordinary, I shouldn’t have drunk it. But I did.He went off to bed. I sat at the wheel feeling nauseous. I ate some potato and leek soup I’d kept warm for such a purpost. I felt worse. We sailed on, and were making good time, but the whole area when we were passing Flinders Island, was pretty mess.

Eventually, for the only time in seven months, I vomited gracefully off the back (stern) into the ocean. Repeatedly. Oh god. I am a pathetic vomiter – it immediately makes me want to cry and go to bed. However. I swallowed a teaspoon of cement and toughened up. That was the last thing I swallowed for the next day and a half except sips of water.

[I am going to give this post to M in case he would like to add his own, more positive experience, of the crossing to the mainland, as mine has very few.] 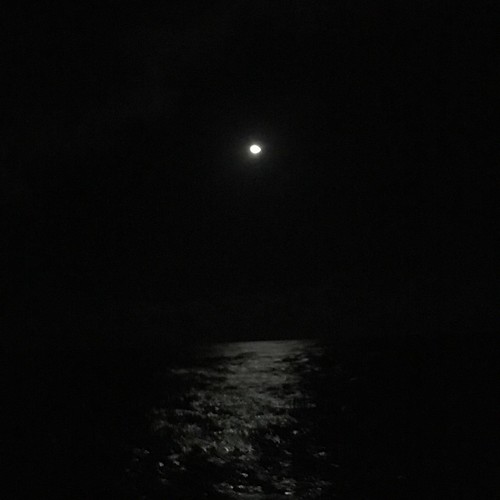 M took over at about 2am and I collapsed into bed. The sea got messier, but the wind was good. Like a zombie, I did the dawn shift. Quite honestly, I don’t remember there being daylight on the journey. If I wasn’t on my steering shift, I was prone. M kept the Smalls fed and relatively happy. 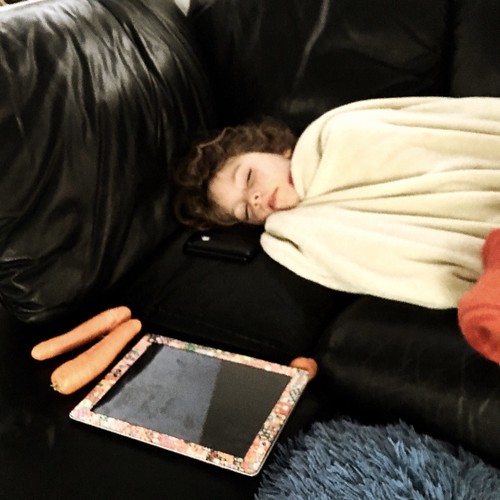 The second night was again like a dream. The frustrations of this kind of sailing for me are my inability to do anything but keep us on course (more often done by Hoo-Ray the Autopilot) and keep a watch for other boats. I can’t crochet, write, read – and when I’m feeling particularly haggard, I can’t even listen to podcasts. Oh the woe… 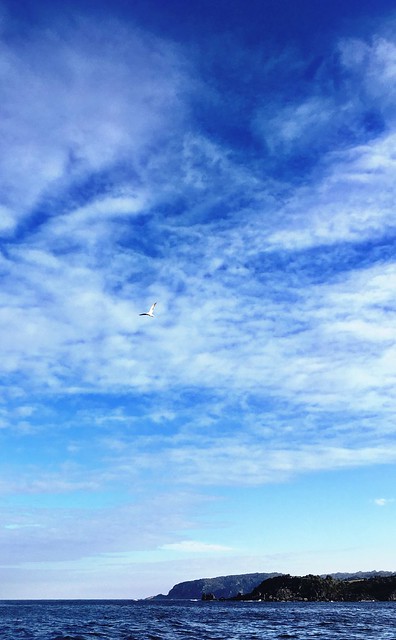 As we neared the mainland, we also entered the shipping route – where those huge hulking monoliths piled with shipping containers come around doing the Sydney to Melbourne run, or similar. We have an AIS (Automatic Identifcation System) receiver built into our radio – this enables us to see any ships within a radius of 15nm (15 nautical miles). Some of those ships are so big that you see the lights marking each end of the vessel and it looks more like two ships.

Anyway, by this time the only way I could function was to put my phone on a ten minute timer, lie down, doze off, wake up, check the AIS/the horizon/the steering – set the timer for another ten minutes – repeat, repeat, repeat. For three hours. M did most of the sailing-the-boat stuff during the daylight hours (the ones I don’t recall) while I continued to lie flat. 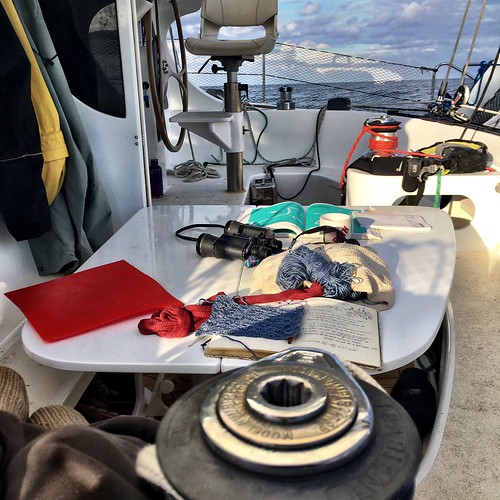 By the second day we could see the NSW coast. Finally, I was able to sit outside in the sun and broke my fast with two soft-boiled eggs. We continued to track north – but as we neared Bermagui, the lure of the land was too much and I threatened mutiny unless we pulled in. The timing was actually spectacular – we scooted over the bar ten minutes before sunset. 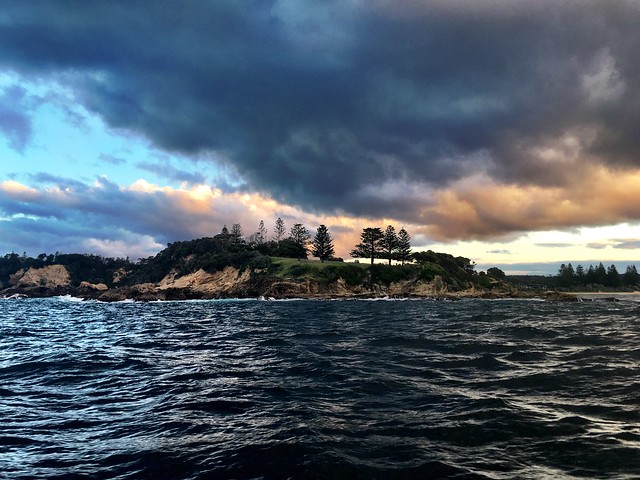 My beautiful Bermagui – never have I loved a pier so much. We tied up, plugged in some power – chatted to the pier guy who said that it was (as we had thought) $25 a night. Markedly more expensive than Tasmania – and particularly St Helens, where $20 had bought us a week. Too knackered to care. 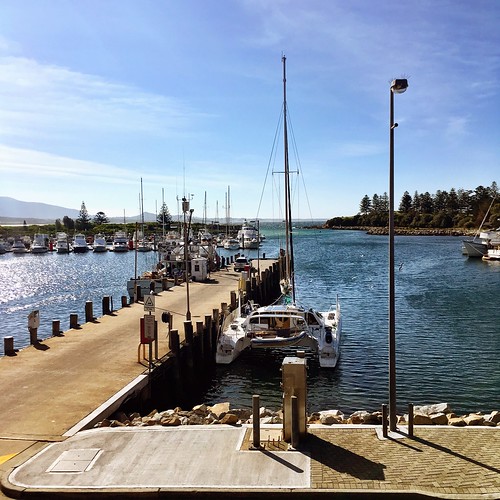 I slept for 12 hours, being cheerfully awoken by Small DB at 7am. We went exploring and found the library, two playgrounds, houses we liked the look of, and a showroom of a Woolworths supermarket – where we bought fresh Tilba milk and marvelled at how cheap all the fruit and vegetables were.

We saw some galahs – an even number of galahs is aways a Good Thing. 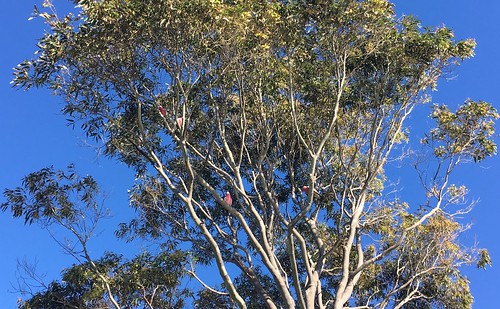 The two days we spent in Bermagui, in retrospect, were ESSENTIAL for my headspace and coping skills. I had agonised in St Helens about what we would eat on the journey, what meals should be pre-cooked or kept in the ThermoCooker – but what we actually required were plain and simple:

That’s it. M, the Ever-Powerful, was able to fry up some chunks of sweet potato and eggs for himself and the Smalls here and there as we made our way up the coast, but I cannot stand up inside for the length of time it takes to cook ANYTHING.

We took the Smalls to see the Blue Pool, which was, as ever, too freezing to swim in… 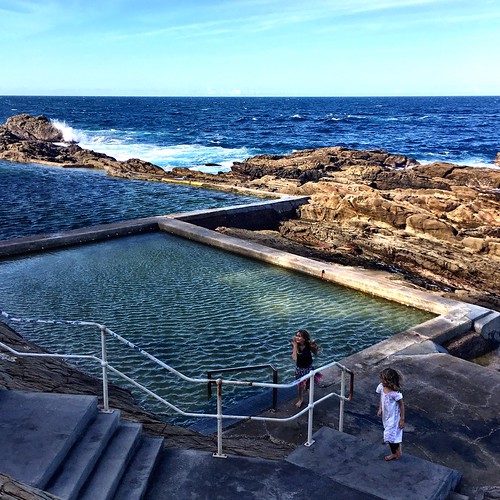 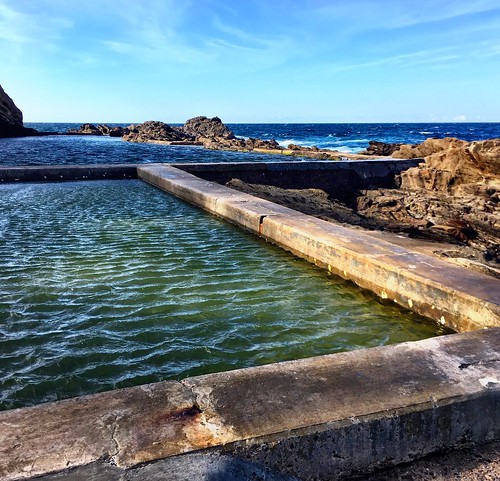 Anyway, on our second Bermagui day, I shopped according to my new realisation, and so far it is going well. Fruit is our friend. However, all attempts at making popcorn have failed. There is some incompatability between the hotness of the stove, the pot and my brain that seems to prevent any sort of success.

The bulk wholefoods shop on the main street is inspirational and prices were great. 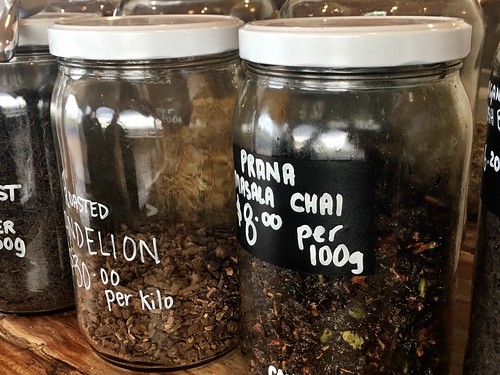 I bought dried salted broadbeans, and these were my sailing snack – there is a theory that if you keep your jaws moving your inner ear will be less confused by the whole scenario… (UPDATE: although the broadbeans fixed up my seasick, or at least kept it at bay, they made my butt so bionic that I could have doubled as a backup outboard motoer, so I have abandoned them out of compassion for the captain and crew.)

M changed the oil and sparkplugs in our two outboard motors, which made them (and him) very happy. It was also a relief to be able to dispose of our recycling in recycle bins – of which St Helens had none. NONE! WTF ST HELENS?! You were fantastic in every other way!

We had some guilt over not contacting mine and M’s relations that live not too far from Bermagui (mine in Tura Beach and his in Eden) but we were exhausted, and focusing on getting everything together to try and improve conditions for our next chunk of journey.