Goodbye money. Goodbye Hobart. Back up the east coast.

Our time in Hobart was brief – just a couple of nights. The days were spent (ha!) haemhorraging money – everything in the bank went on food and fuel, a bit of tip-shop frivolity, a bottle of beer and a bottle of wine. The Smalls both went busking and raked in about $60 each – school holiday time seems lucrative!

We spent our last night packing stuff away and having a nibbly odds and ends sort of dinner with Grant (you can see a little film about him online here – it’s from a series that we already enjoy, we just had never seen his one!) from Apache. Our friends, Karyn and Jim, pulled up to the same pontoon to meet some friends – it was good to have a little catch-up.

M had us heading out of there at 6am ? – no time for any early morning goodbyes. We had a long day ahead of us. 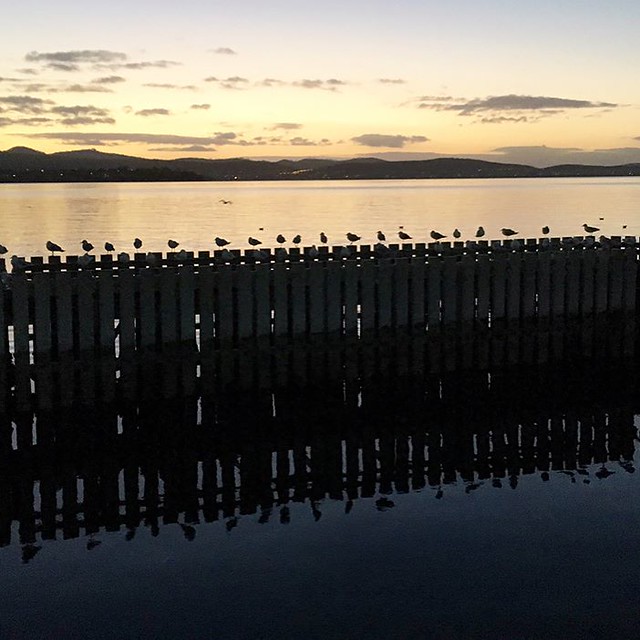 In contrast to our trip down the east coast, this time we followed Slippery Gypsy – Ben’s catamaran – through the Denison Canal – it was kind of cool to see all the traffic banked up as the bridge opened to let us pass…

M had hoped to stop for a surf in Marion Bay, but we plugged onward, eventually reaching Orford at about 7pm. It was a relief to drop anchor. 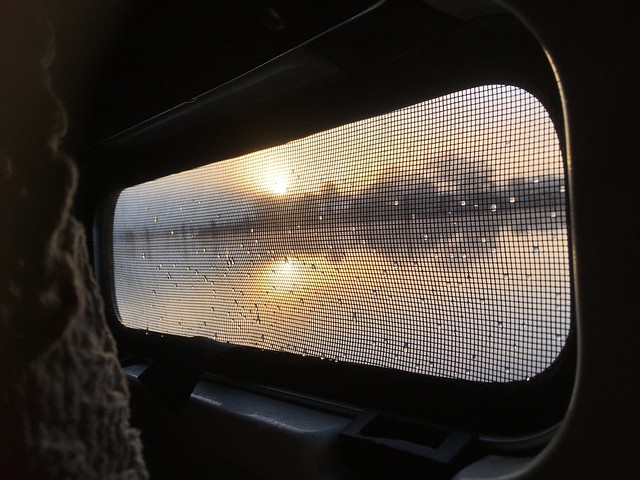 The next few days were full of beautiful sunshine – I had some solitary boat time while M took the Smalls to the mouth of the Prosser River to practice their surfing. 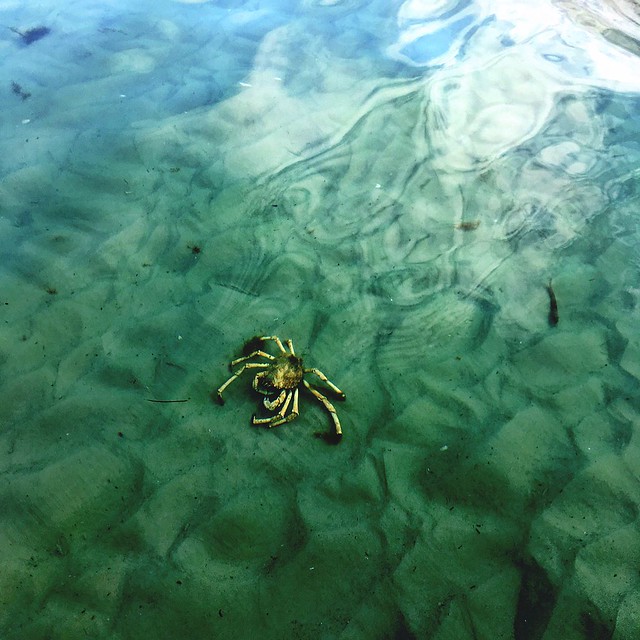 This gave me time to actually edit and fix almost all of the tracks on the map of our travels (which you can find by clicking up the top – or here – on ‘ROUTE’). Yay me! It was a somewhat steep learning curve! 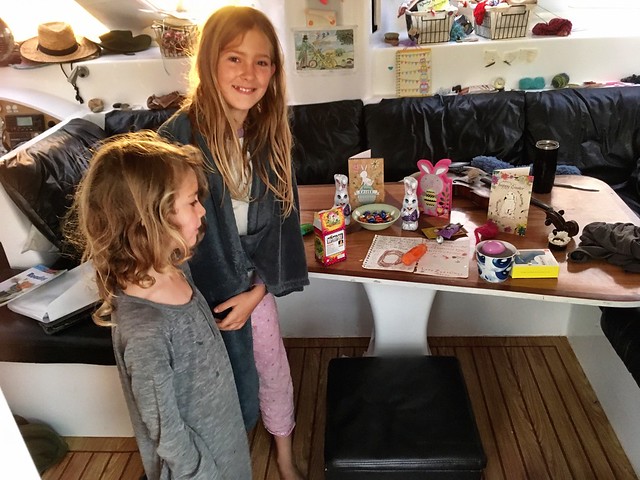 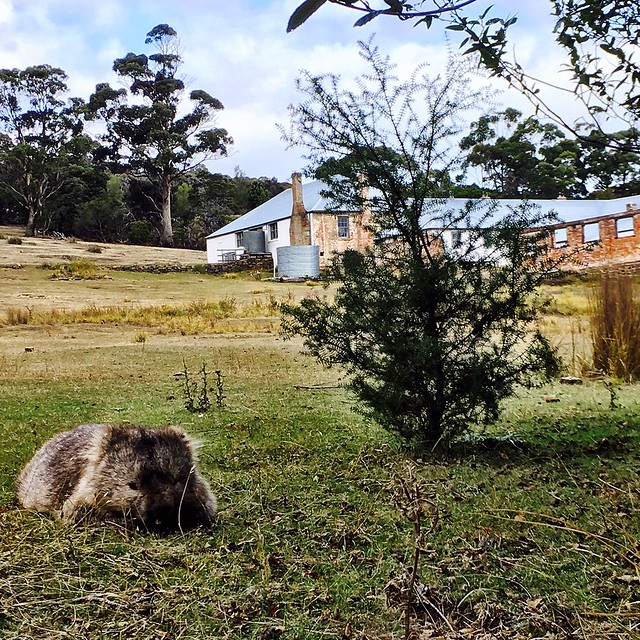 We spent Easter Sunday on Maria Island doing some wombat-spotting and had a bumpy night in Darlington Bay. So bumpy, that we headed back to Orford, on another spectactular morning, to get the hell out of there. 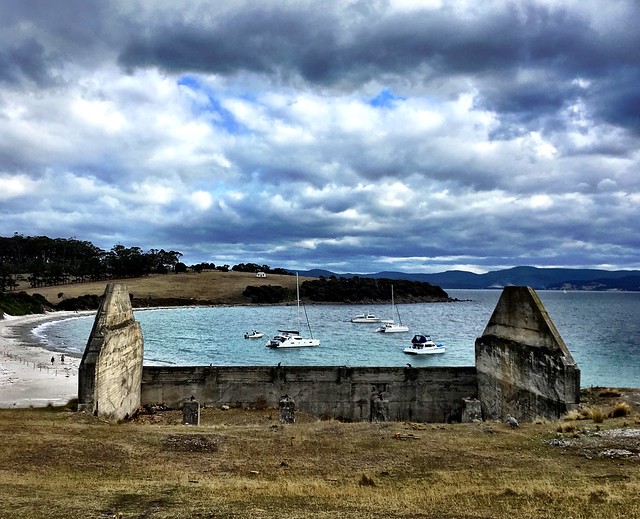 Why were we hanging around Orford, instead of continuing up the coast? Because I had ordered new shoes for Small Z a week or two earlier and was having them sent to Orford Post Office. I had not counted on three things:

Thus I tweeted Australia Post – begging to have a delivery date. No matter that the shoes had been in Australia for over a week – they were unable to deal with specifics. In the end, it took a shorter time for the shoes to get to Australia from the USA than it did to get them from Victoria to Tasmania. Hopeless doesn’t even cover it.

Of course, they arrived the day after we left – and of course we could have stayed an extra day IF WE HAD KNOWN. Gahhhhhhh. In the middle of the shoe-waiting we visited Triabunna for the night to top up our fuel. Stan, the harbourmaster, was no longer in charge, but we were told we could tie up for the night. Huzzah!

Small Z made us breakfast… 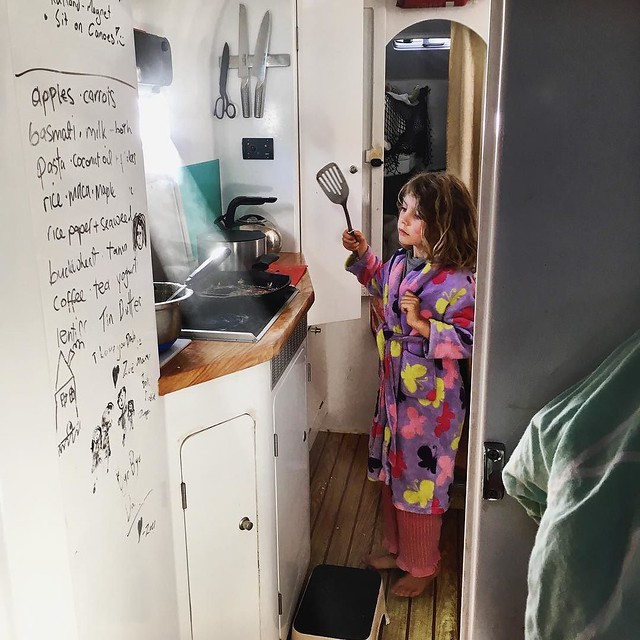 Mr Chattypants was out in force and people gave him a quince, a book of violin sheet music and two amazing apples…as well as a little bag of coffee (an original blend).

Both in Orford and Triabunna the Smalls had the opportunity to bust out their scooters and enjoy themselves. This is Small Z’s ‘Death-Hang’… 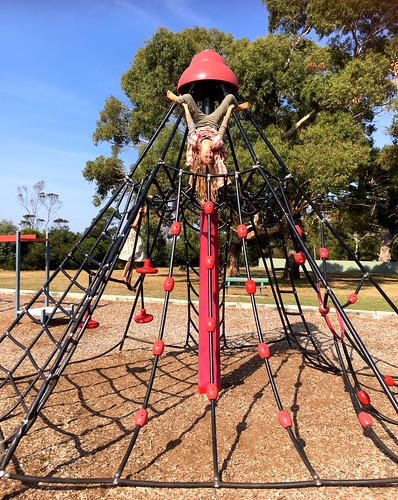 We spent our last morning in Orford double-checking on the inadequacy of Australia Post (and my opinion of them has no relation to the Orford Post Office, which was incredibly helpful – they agreed to forward our mail and return our library books – it’s a pity they aren’t running the whole bloody company).

After a consoling wifi session at the cafe, where I downloaded a handful of library books for the weeks ahead – and (at the request of M) an animated knots app – we motored back through clear water spotted with spider crabs, and got going.