The trip back to Franklin did not daunt me; the weather forecast was good, and the Smalls and I had our minds firmly fixed on the gluten free fish and chips there. We left at about 6am, bidding farewell to Spain Bay and the Breaksea Islands.

It was useful to have the track we had taken on our way to refer to. We could see Stephens Bay, where we had walked yesterday. This time we went between Flat Witch and De Witt Islands (the latter also known as Big Witch).

There was a 15 knot northwesterley coasting us along…which sadly dropped away as we got around South Cape…and then turned into an easterly, which was not what we wanted. This necessitated some motoring, then some sailing, then some motoring, and finally at about 9.15pm we arrived at our old anchorage in Recherche Bay near Cockle Creek. A spew-free voyage.

Just as we arrived I heard my phone ‘BING’! The first mobile coverage we’ve had in over two weeks. It was the Mothership – a message from seven days before. I called her straight back…the phone call was a long one, as there was a lot to catch up on.

Particularly the part where another family member had started to worry about us having been out of contact for so long, and that seemed to have caused the worry to become tangible for the Mothership and T – the latter tracked us with sniffer dog precision via the telephone, finding people who had seen us in Strahan and then others who had seen us in Port Davey.

All assured him that we appeared intact. However, I was told to expect some communication from the Search and Rescue services, who had been notified that we appeared to have gone AWOL. WHAT THE!?

Sure enough – there was another ‘BING’ on my phone…

I called them. Spoke to a guy called Phil.

“Hi Phil, this is Beth from the catamaran Bella Luna – apparently some of my family members got a bit excited while we were down in Port Davey?”

He laughed. “Don’t worry about it. Happens fairly often. Where are you now?”

“We left early this morning and have just put the anchor down in Recherche Bay. Sorry for any drama.”

“No worries. Sounds like you’re having a great time!”

These were my first communications with the outside world after a fortnight off the radar. I needed, and made, a strong cup of tea – then passed out.

At 7am we were back on our way and sailed to Port Huon. Who did we meet on their way downriver? Grant on Apache!

090/365 • neither we or @teamtwodogs knew when we would see each other again, but we just passed each other on the Huon River and stopped for a chat and a tack or two. A perfect coincidence ✨• . #apache #huonriver #serendipity #friends #flute #seagypsies #discovertasmania #tassiestyle #bellalunaboat #Autumn2017 #cruising

He had arrived in Franklin the day before we left – had loved it and stayed there a month and was on his way back to Hobart – we caught up and tacked alongside each other before heading our separate ways – we will see him in Hobart soon.

We had dinner with Ian, Juleen and Rory at the Aqua Grill – home of the GF fish and chips, with outstanding handmade sweet potato cakes. It was so good to be back – we told them of our adventures and our horror of the impending cold weather. They couldn’t believe we weren’t even going to stay a whole week.

Over the next four days there were many cups of tea. We borrowed the ute for a whole day and did our MOUNTAIN of washing at the excellent laundry in Huonville, and a very big shop to try and replenish our foodstores as best we could until we can make it to Eumarrah – the bulk food shop in Hobart. 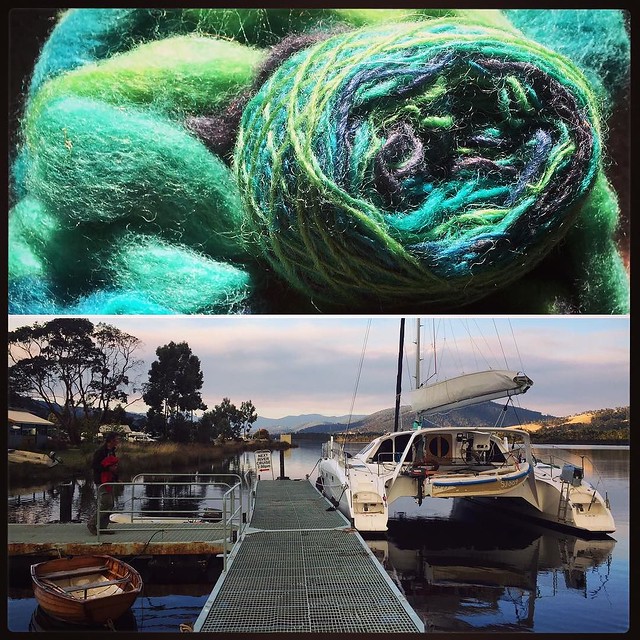 It was lovely to see Calamity – their little wild kitten – she had become much tamer and happier during our month away. She was very shy of the Smalls, who are a bit noisy and unpredictable, but I managed a pat or two… I wish so much for a boat-cat – but that is another post entirely.

We collected mail from the post office and mourned the loss of the beautiful apple tree that had made us so happy. The vacant block it was on had sold in our absence and the new owner had seen fit to chop it down entirely. I somehow think that I would not get along with that person, should we have the misfortune to ever meet. Dickhead.

Our last night in Franklin was spent sitting by the wood heater in Juleen’s loungeroom – the Smalls hot-chocolated and happy – but desperate to stay and have Easter with our friends. We all ate dinner aboard Bella Luna, where M was cranking out the rice-paper rolls.

Goodbyes are awful. We swapped our last stories, last digital files and I said a wet-eyed goodbye to Juleen and her blokes – they had let us into their house and their hearts. 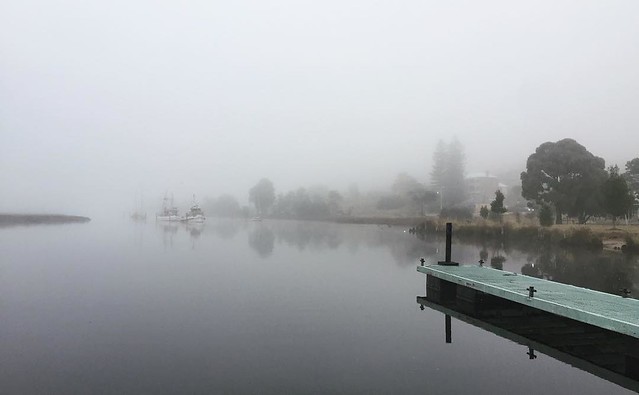