At 5.30pm today I was leaning over a fast running creek filling up a 10 litre bottle of water and rinsing a bucket of salty clothes. It was the first time that we had been able to leave the boat all day without getting soaked by rain or pummelled by hail.

All day it showered, pelted, bucketed and hailed on and off – with an added blast of lightning and thunder – just the once, but uncomfortably close by. At 5pm it stayed clear long enough for us to get on all our foul-weather gear and set off in Foamy to top up our water from a fast running creek M found yesterday.

Before we left, M had declaimed to Small Z, “There are no leeches there. Let’s go! We’ll search for gold in the creek!”

Small Z has an irrational fear of leeches. More on that later.

“Do you need to go to the toilet before we go?” I asked her, as she layered on her clothes.

“No.” And neither did Small DB.

I tried to dress Small DB as warmly and weatherproofly as I could, but there was one layer too many between her longsleeved top and her coat, and she cried the whole way (a long ten minute dinghy ride), saying that she couldn’t bend her arms properly.

On arriving at the creek, I removed one layer, and her mood improved. M and I filled up the water containers, I, as I said, rinsed the clothes, and then we all had a go at panning for gold in the creek bed. Until, of course, Small Z needed to wee – and had to spend much time divesting herself of all her layers in order to do so.

Then Small DB needed to go too…. I sent her off to get help from M, who was on flat ground. About ten minutes later I heard a commotion further up the creek and Small Z’s voice shrieking. I could only discern one word.

I clambered back down the creek to Foamy, and a tear-streaked Small Z joined me a few minutes later.

Trying to banish the vision of her having a leech the size of a small black pudding hanging off her butt, and what that would mean in the middle of Tasmanian wilderness, I told her to take off her sandals and check her feet and to wash them off in the sea-water. Leeches don’t likek salt.

There were no leeches on her, but her wails did not abate. And then, as I looked at my own feet – between my toes – and found A LEECH, her sob-decibels increased – and as I discovered FOUR more, her volume grew accordingly. I have never had a leech on me before. It was quite novel.

M returned to Foamy with a placid Small DB. Tight clothes she cannot deal with, but a leech in her pants? No problemo.

By this time, if there had been any leeches remaining on our persons, they would have had to all migrate to our torsos, because our limbs were numb with cold and devoid of any discernible blood. We departed amid the sound of Small Z’s wailing.

M swung between thinking her distress was hilarious, taking photos of the scenery and stating ever more stridently that leeches do NO HARM and that Small Z didn’t even get one ON HER she was not to develop a PHOBIA about things that WEREN’T A BIG DEAL.

Le sigh. By the time we got back to Bella Luna I had snapped at him to stop filming the scenery and to get us back as quick as possible, he was feeling wronged but whistling as if it was all peachy and the Smalls were panting to take off their wet things, be declared leech-free and given cups of hot soup.

Which brings me to now. It’s 10pm. It is freezing. I have used the stove to cook dinner, boil the kettle and boil a pot or two of saltwater for hot-water bottles. The walls are dripping with condensation throughout the boat. I have had to wipe down the drips from the Smalls bedroom ceiling to they don’t wet Small Z in the top bunk while she sleeps. 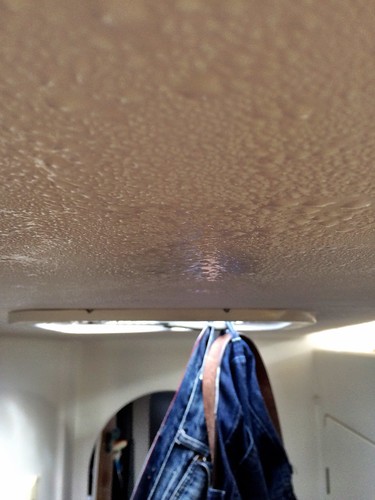 Everything is wet. All our clothes are wet – even our clean clothes are damp. Our food supplies are low – we have a red cabbage, brown rice, chickpeas, some spuds and sweet potato, a bit of frozen tuna, some chia and polenta. There’s barely any milk powder left. We’ve got a little chunk of cheese. #firstworldproblem but…

I’m over it. If I awoke tomorrow morning and there was some kind of magical wind that would take us to Brisbane, I would not hesitate. Sorry Franklin, sorry Hobart, sorry Flinders Island. If this weather does not improve, I want OUT OF HERE.

I have done two Victorian winters in this boat in the boatyard and I am not going to winter again on this boat anywhere. My quest is for temperatures in between 18 and 26 degrees. It is currently about seven. I don’t want to explore any more of Port Davey, I want to leave. Now.

But first we need to get to somewhere where we can get a weather forecast on the VHF radio – because even with my loathing of the current conditions, I do not want to get slammed by unfriendly winds, seas and swell out in the Southern Ocean.

First thing in the morning (if no magical Brisbane-bound wind appears) we will pull up the anchor, untie the ropes from the trees, and venture out to get a forecast.

And now to sleep, thinking enviously of the two women I have met this week, both of whom vacated their partners and their boats and flew out of here on little planes taking off from the Melaleuca airfield. *whimper*