We left Clayton’s Corner before 8am on 31 March 2017. En route, M had a driveby from Robert in his Amazing Floating Wheeled Watercraft who was beginning his fang back to Hobart*. I decided I would prefer to eat breakfast once we had anchored. Unfortunately this was not until 10.30am, after it took an extended time to secure Bella Luna to the bank with ropes from the stern, held by the anchor at the bow.

I could tell, even as he leapt into knee deep water in his comfy cold-night sleeping trousers, that M was taking an obscure Boys Own Adventure delight in the difficulties that were ensuing. Foamy got wedged under Bella Luna and then the dinghy anchor rope stretched tight and held her there.

“Get my wetsuit,” he bellowed in a deadened, resigned kind of voice – inferring that he would have to dive down to free it.

Meanwhile, I was trying to untie the knot holding the end of the anchor rope from the shackle holding it in Foamy, but it was quite difficult with benumbed fingers.

“Hang on,” came M’s voice, suddenly perkier. He had walked around the top curve of the cove and was doing exactly the same thing to the anchor end of the chain, and far more efficiently. He removed the anchor and chain so there was only rope remaining.

“Pull this,” he instructed, “And we’ll see what happens.”

I pulled the rope and it slid happily through the water, not wrapped around the propellor… No more was said about the wetsuit, but I couldn’t resist;

Eventually we were secure. Apparently this is how you often tie up in the mediterranean – and if so, we’ll need a lot more practice before we consider visiting! But it was very nice to be on our own again, surrounded by water, trees, sea and sky.

We crowbarred the Smalls out of the comfy boat, with some effort, later in the day. It had been supposed to rain, but there was none, so we ventured out over the water to the bottom of Balmoral Hill. M becomes inordinately frustrated at the time it takes the Smalls to extract themselves from the boat – particularly when they don’t want to, and our expeditions often start out with us all under a cloud of irritation.

The Smalls and I ascended Balmoral Hill, singing marching songs and playing “I Went to a Party” thus:

At the top there were some Good Views and after viewing them, we sat down amongst the button grass to eat some oranges out of the wind. There was a hardy banksia right on the top, with wombat trails around the base beneath long long grasses. 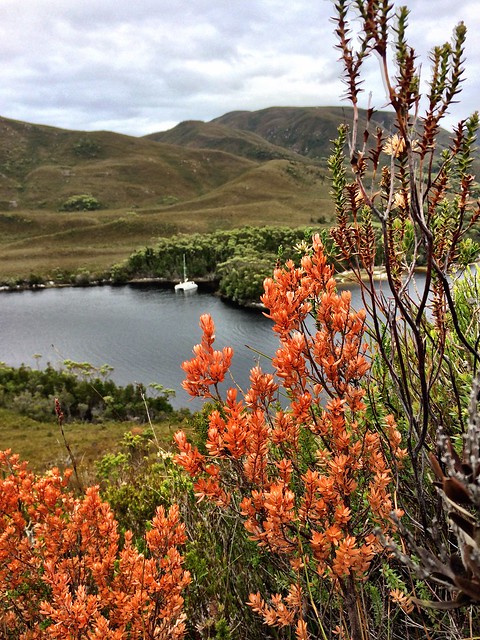 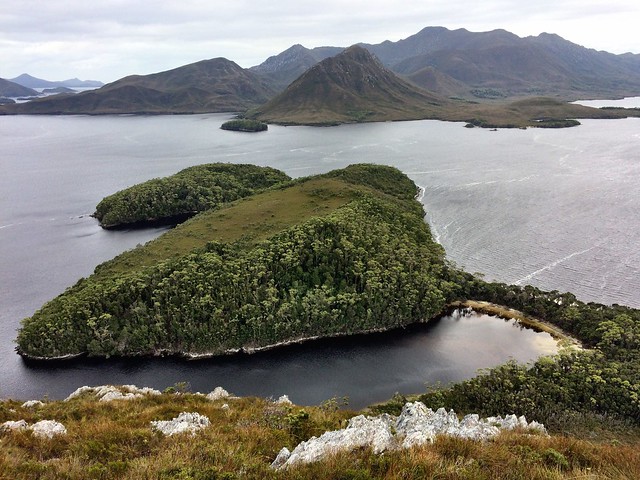 [That little isthmus at the back of that little cove in the above photo was our destination when we got back down the hill.]

The wind at the top of the hill blew off the irritation cloud, but then we began to make our way down… Small DB had been the leader as we ascended. Small Z was to lead the descent…but her sister had other ideas. This turned into a giant scrambling brawl that, at one point, had Small DB slipping over and Small Z accidentally cartwheeling over head. 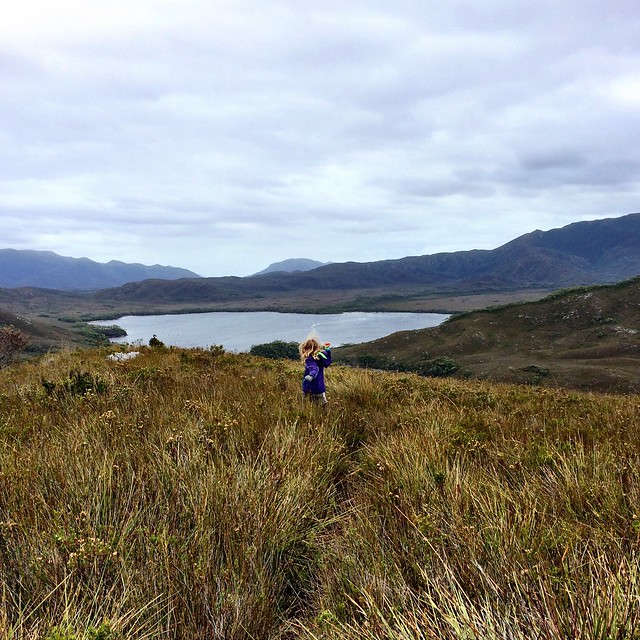 I sent M down in front of me to do some parenting, whereupon he yelled at them and continued on down the hill as Small DB laid down on the grass in disgrace and Small Z’s brain started leaking from her ears. Then I started yelling… In the end they both apologised to each other of their own accord and were soon chasing each other down the path, counting how many times they fell over – with Small Z in the lead.

The Smalls had regained their humour and M and I wanted to explore the little isthmus we had seen from the top of Balmoral Hill. Gosh… it was beautiful – both the cove side and the beach side. Small Z and I lined up all the different coloured rocks we could find… 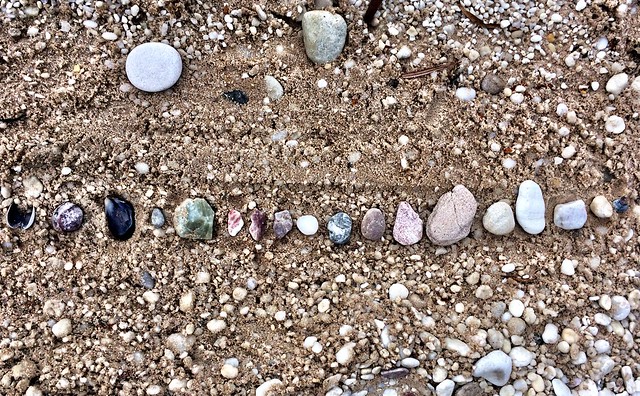 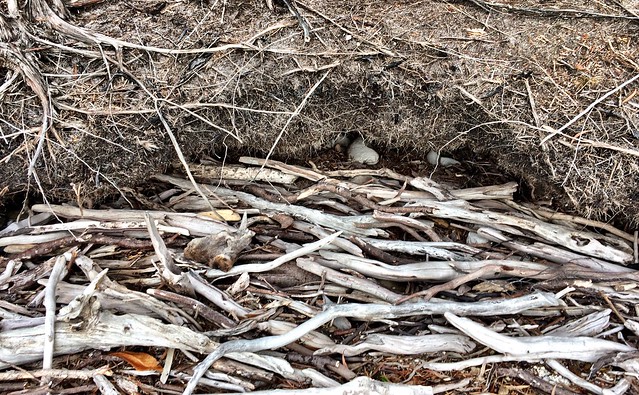 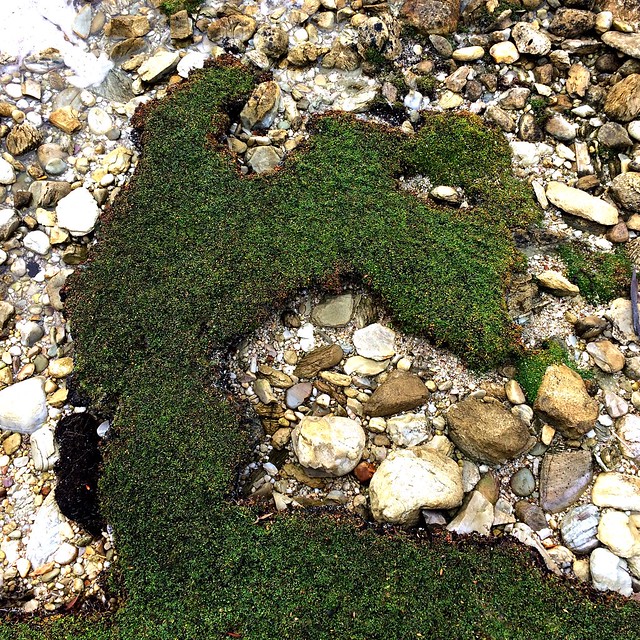 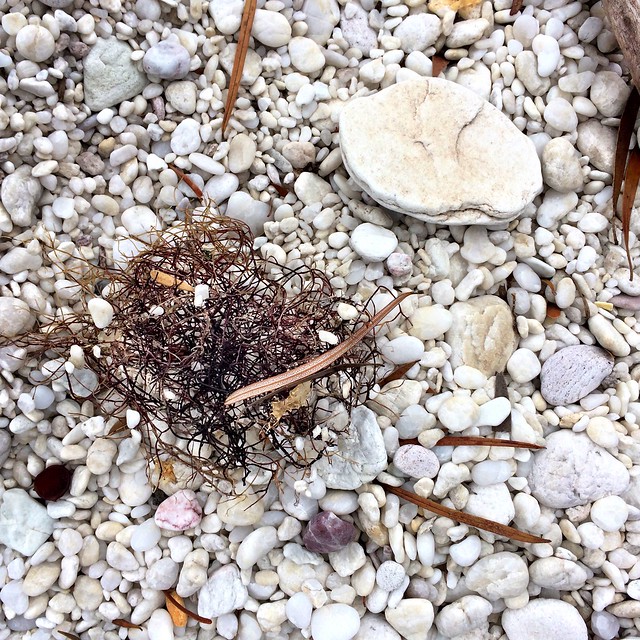 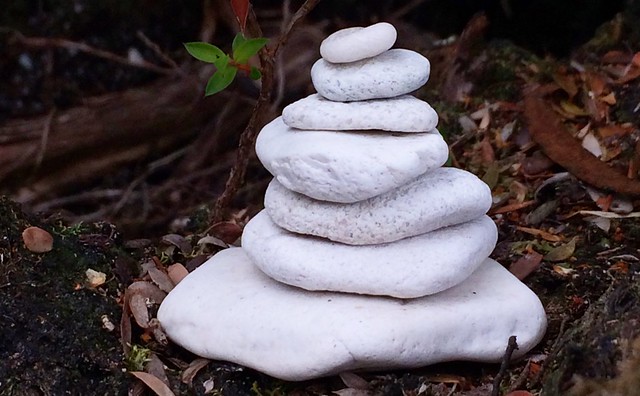 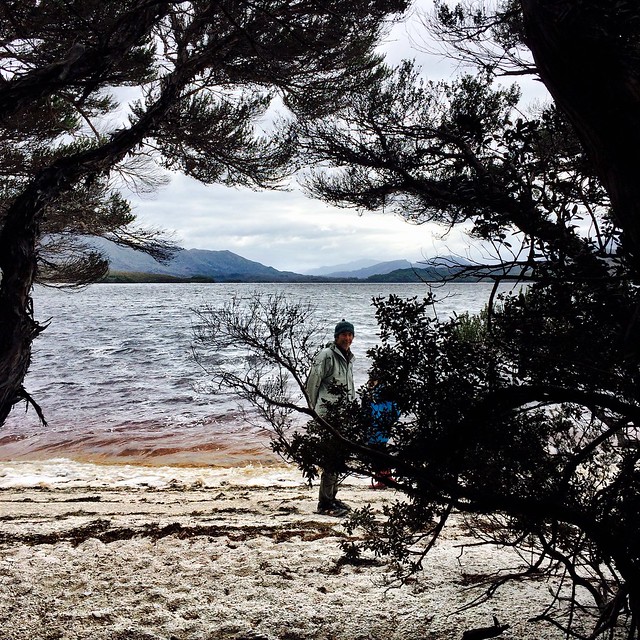 Small DB elected not to explore the beach, but remained in the cove…