After a few days at Clayton’s Corner recuperating and exploring, we left our lovely spot and went down Melaleuca Creek, about which I have read so much in King of the Wilderness. I had begun to realise, after discovering a pilot laying a tablecloth on the table in the house and putting out the contents of two or three eskies on it (wine, biscuits, cheese…) that Port Davey hosts far more tourists than I had been aware of.

We tied Bella Luna up to some pylons on Melaleuca Creek and used Foamy to travel the rest of the way to the landing near the airstrip, originally built by Deny King. He could not have forseen that in 2017 there would be at least one or two planes a day flying in and out. 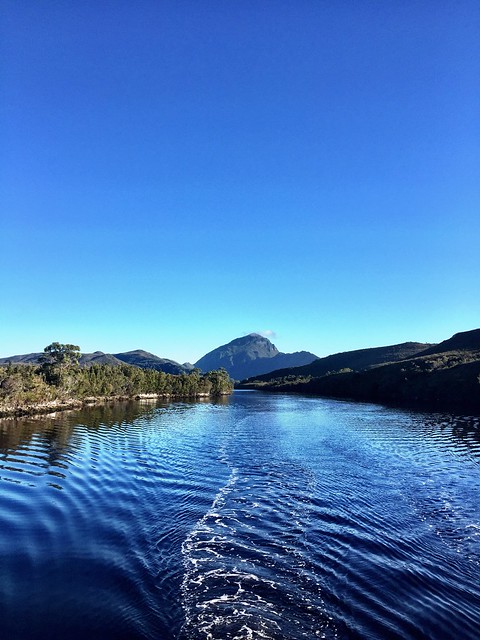 There were a few tourboats tied up at the landing, an over-powered tinny and a bank of kayaks branded Roaring 40s. We nudged our little refrigerator foam dinghy into an unobtrusive spot and went ashore. BUTTON GRASS. Lots of it. And a beautifully built boardwalk. An aboriginal sculpture… 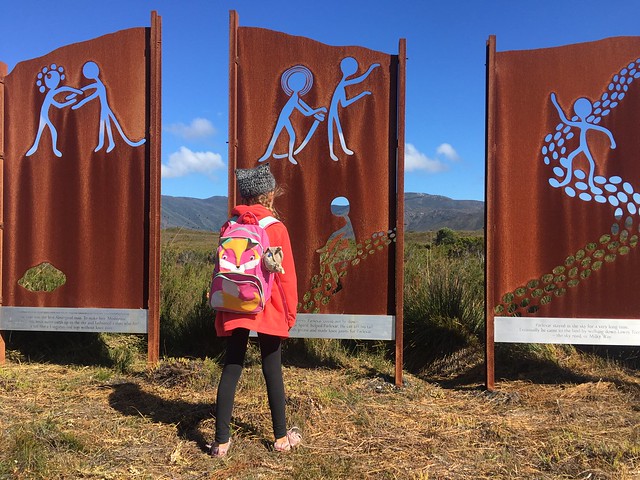 We lunched in the Charles King Memorial Hut, built by his son Deny King in 1960. This was a particular thrill for me – to sit at the Huon pine table in front of the original fireplace, with three sets of old cast-iron bunk beds. We read the visitors book – always interesting. 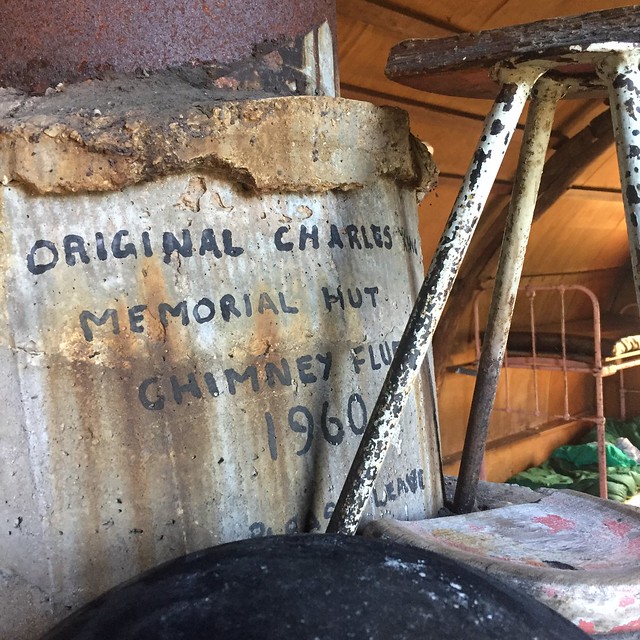 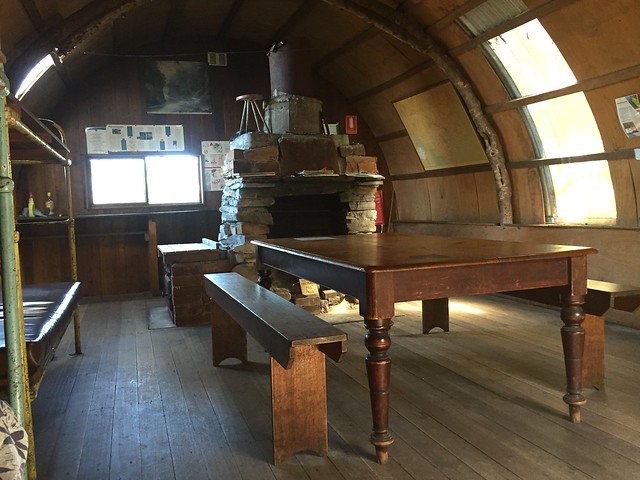 The Deny King Museum was great to poke about in – great presentation of information and artifacts. The building is also a bird watching spot, but spending ages using their telescope and our binoculars failed to show us ANY birds at all – even though the logbook revealed that orange-bellied parrots had been seen the day before…

The Smalls were stroppy by that point. M dropped us back at Bella Luna, made a coffee, and went back down the creek to where we had just been to do further exploring. I began cooking dinner… He returned much sooner than I had expected, and he looked full of some kind of crazy secret.

I did actually think he had stumbled over a dead body or found a gold nugget. But no. He had discovered another bird-hide, occupied by a bird-watcher called Helen, who had invited him in. There, he had seen six… SIX… baby orange-bellied parrots. There are only about 50 of these parrots left IN THE WORLD – and he was beyond thrilled. He knew Small Z had been very disappointed in her birdless explorations earlier in the day and had come to take her back to see them. Small DB elected to stay behind with me.

Joy of joys! Small Z saw some baby orange bellied parrots as well. We stayed on the creek that night – and it was the coldest night we have had so far in Tasmania. A three-wool-blanket night. I got up early the next morning and motored Small DB and I up the creek to try and see some of the parrots for ourselves. 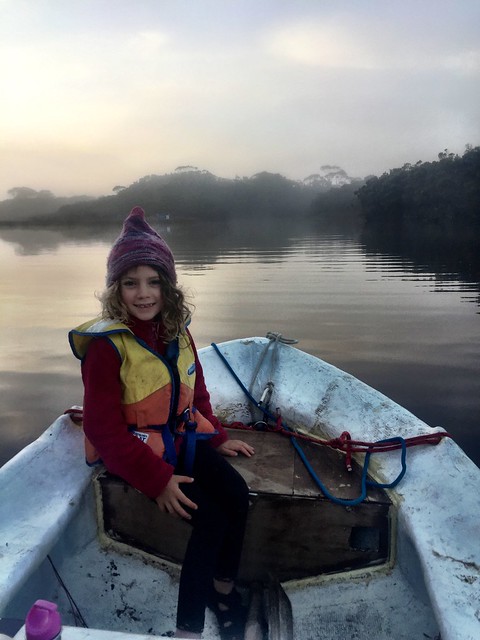 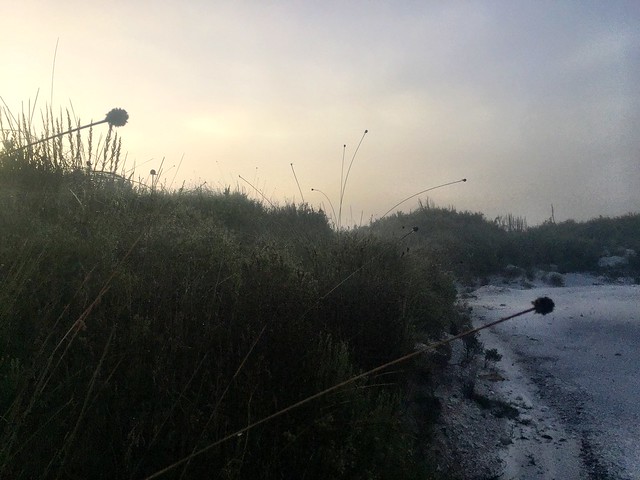 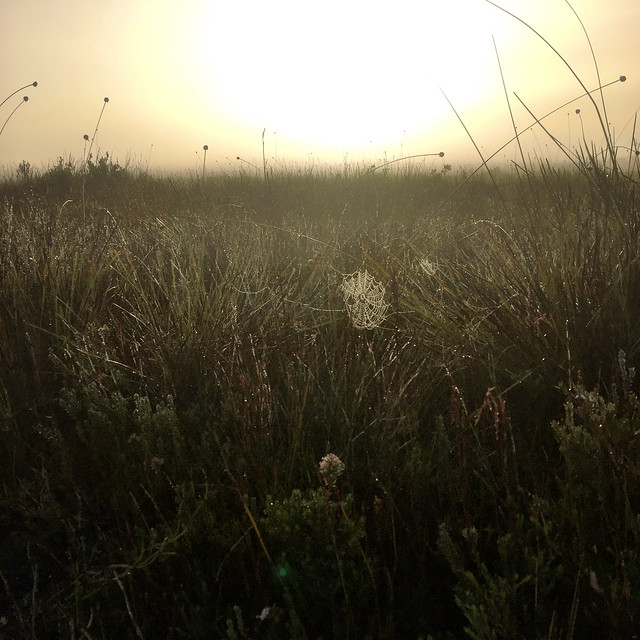 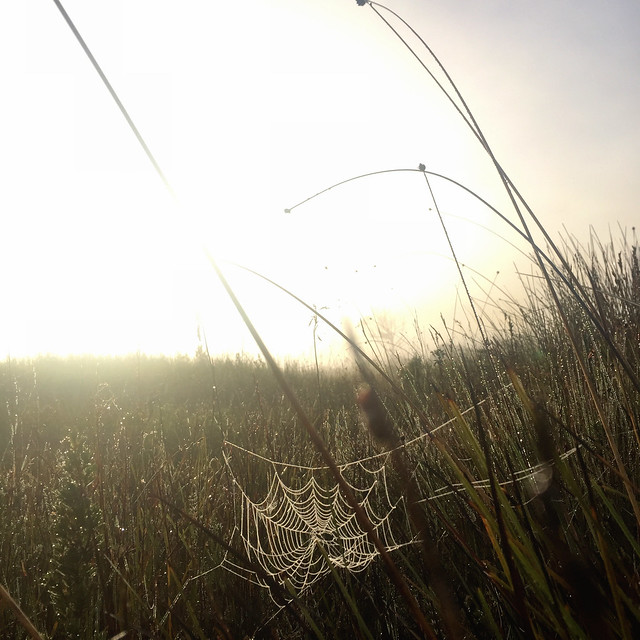 Sadly, our expedition was doomed, because we could not find the bird hide, and wandered around looking for it in vain for 90 minutes, before returning parrotless, to Bella Luna. I’d given up by that point, and had accepted my parrotless status. What I was dreading was the response of M, who I knew would be inordinately perplexed by our failure.

Sure enough, upon discovering what had (or had not) transpired, he tried desperately to figure out why – had we walked the wrong way (we had not), had we walked over the airstrip (we had), maybe we walked too far? Maybe not far enough… He was unable to comprehend our failure.

In the end, as I made the pancakes I had promised a cold and disappointed Small DB, I had to tell him to shut-up. It was a bird-HIDE – it was constructed to be camoflaged and the only reason he had found it in the first place was because Helen-the-bird-watcher had left her bicycle on the ground outside it….

He shut up. A little while later he and Small Z returned to see if they could reprise their success of the previous day. Small DB and I remained onboard, stout of heart, parrotless, but coping.