We spent the morning in Recherche Bay digging for cockles with our toes in Cockle Creek – M also got some oysters – and we ate them all for lunch. DELICIOUS. 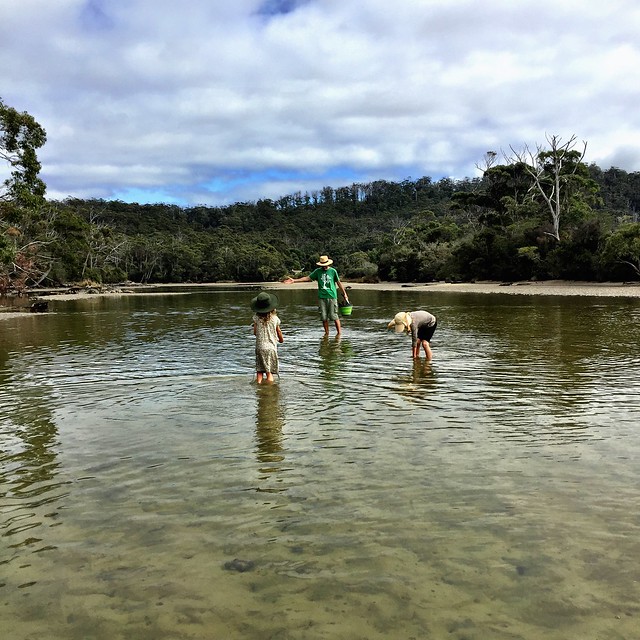 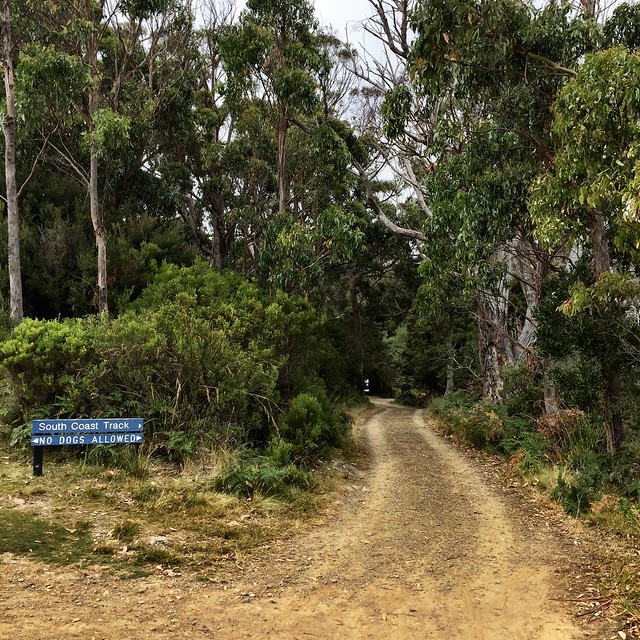 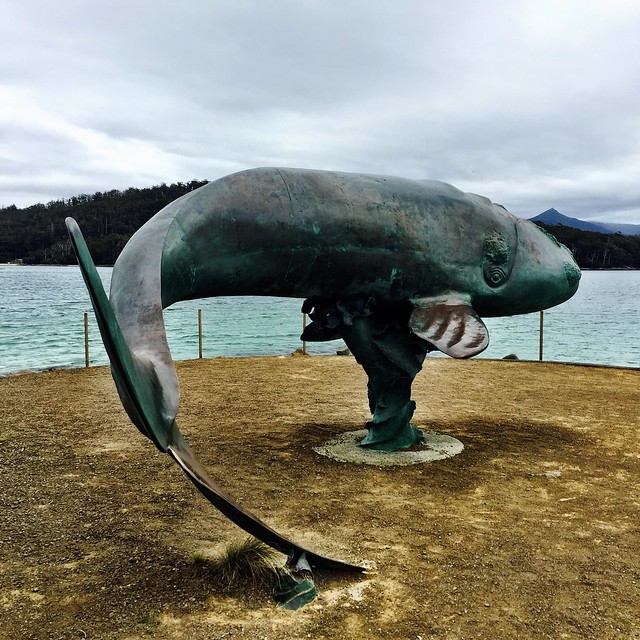 Small DB enriched our morning by the worlds longest tantrum. Small Z equalled her performance just before lunchtime. M and I were ready to leave them with two volunteer rangers who we had chatted with.

Realities of full-time cruising – pretty much zero respite. Gah. We pulled up anchor at 3.30am to begin our 27 hour sail to Hells Gates at Macquarie Harbour. M tells me that things were generally fine and that our speed varied between surfing down waves doing about 15 knots to almost completely becalmed.

My notes indicate that we motored for ages after leaving Recherche Bay and that I went back to bed after helping get the anchor up. The ocean swell hit and I felt revolting. I took over at about 8am or so. The Smalls stayed in bed – thankfully right next to a plastic container, which was useful when Small DB threw up in it.

M took over from me around lunchtime and I went back to bed for about three hours because I continued to feel vile. This seemed to be a combination of the usual crap I endure in the middle of my cycle, a bit of a bug I’d picked up and a bit of seasickness. My sleep made me feel heaps better. So did the dolphins… 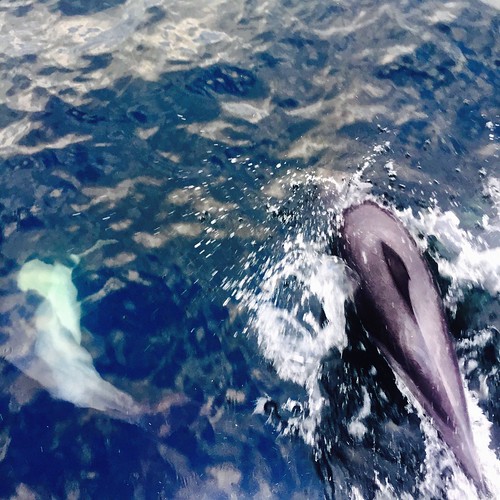 I took over after we passed Maatsuyker Island – I could see the lighthouse and the lighthouse keeper’s accommodation on the steep edge of a hill. As we left it behind us a helicopter flew over carrying something swinging underneath it.

I made dinner at around 4pm as the conditions were lovely – warm and breezy. We saw some seals swimming dolphin style! However, when it was time to actually serve it up, being down in the galley (kitchen) organising bowls and cutlery, sent me into the spiral of bleugh again. 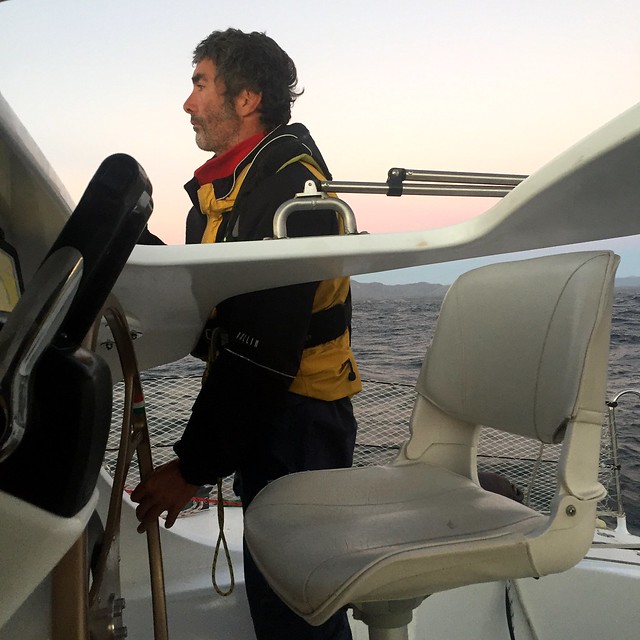 I took over steering and M took over dinner and getting the Smalls off to bed. He allowed them to take iPads in with them (unheard of) and Small DB vomited up all her dinner half an hour later… He steered for a few hours and I took over at about 9.30pm and stayed on until after midnight, steering by the stars and listening to podcasts.

I hit 14 knots once or twice, whizzing down waves. It was a bright half-moon that lit up the sea ahead of me. Even with the lowest brightness setting the navigation iPad made steering difficult, so I turned it off and kept the two pointer stars between the jib and starboard halyard.

There were two weird lights that we could see off to starboard – in the direction of the coast. One must have been a fishing boat or a marine farm, the other we were not sure what it was. The chart stated that the nearest lighthouse was on Low Rocky Point and that it would shine a white light every 15 seconds.

I spent a long time counting the duration of the flashes – every 11 seconds and every six seconds. What the? M took over until 5am – the Smalls and I had a difficult night – lots of mozzies appeared and ate us, then M had the stove on and we cooked gently in our own sweat. I had gone to bed with two pairs of everything on, because steering in the Southern Ocean is cold work… 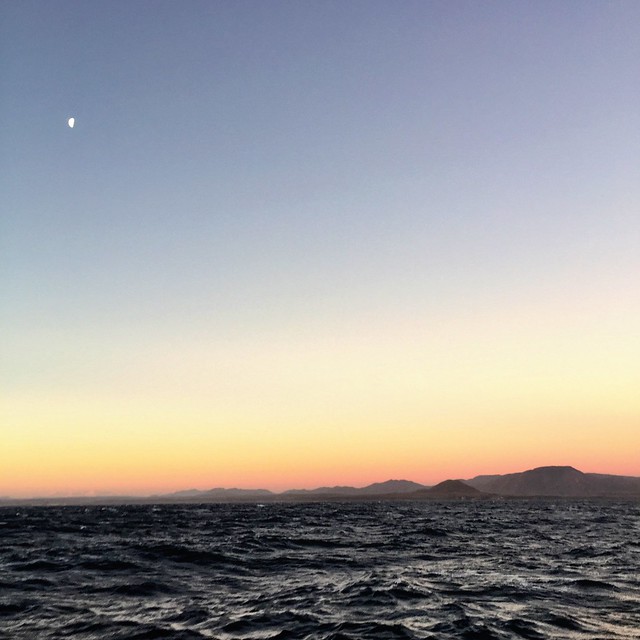 I took over again at about 5am to give M some sleep before we got to Hells Gates. As the sky lightened I could confirm that the light I could see was from Low Rocky Point Lighthouse. I was so happy to see it!! So either its light flashing pattern has changed, or the chart is wrong… 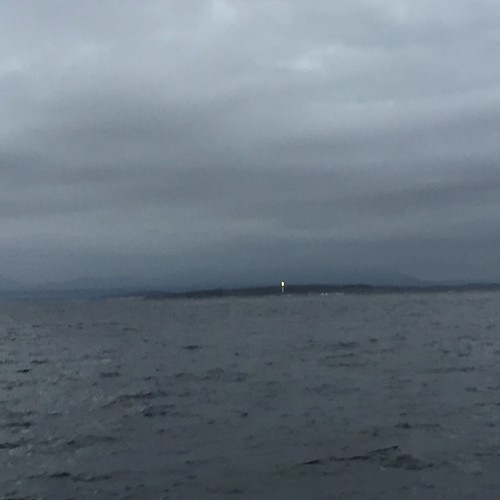 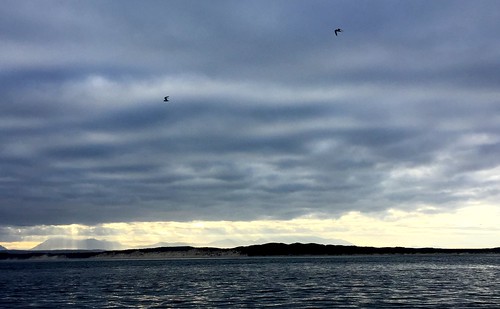 M only got to sleep for an hour or so, as we reached Hells Gates at about 6.30am. Bella Luna pushed her way through against at least a three knot current. It was quite exciting to be out of the ocean and finally so close to Strahan! 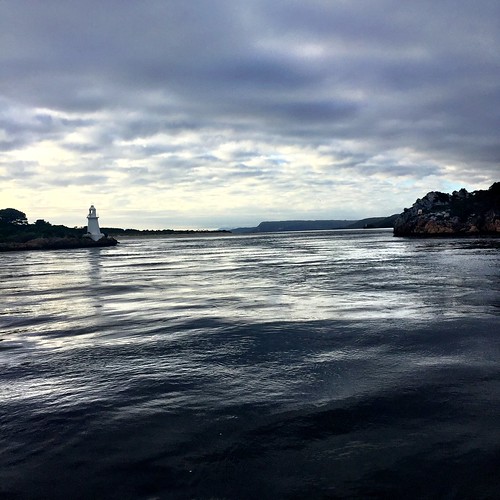 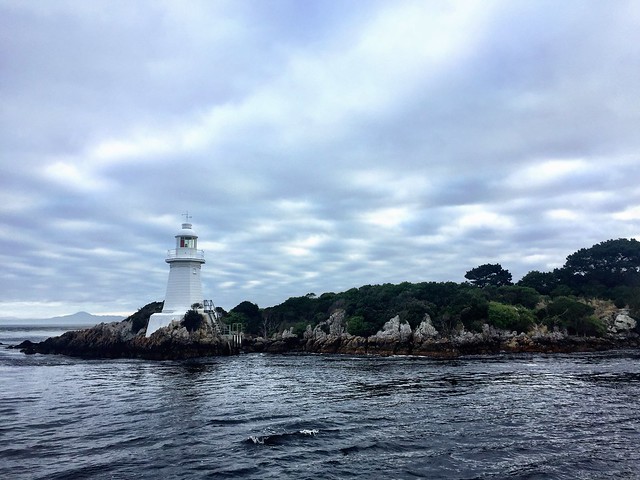 But….not that close. It took us easily another five hours to get there. As we made our way down the channel, at least three or four huge motor catamaran tour boats passed us at speed. We sailed and then motor sailed, finally arriving around 1pm. Exhausto. The Smalls, thankful for calm waters, worked on their books… 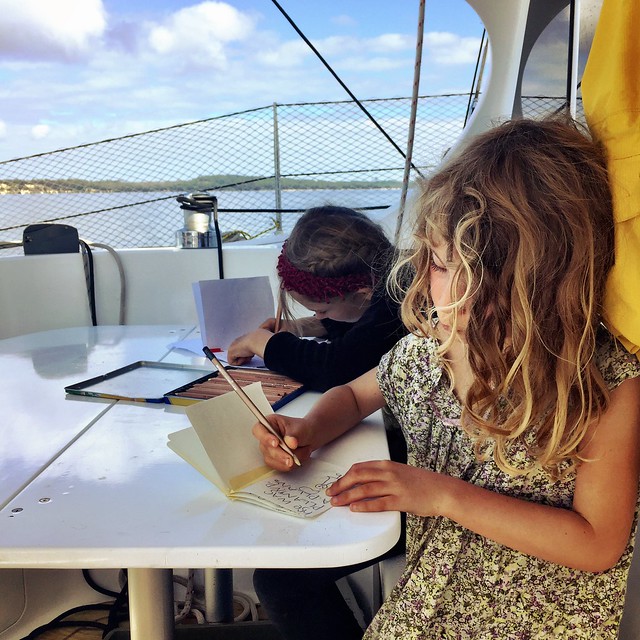 It was somewhat odd to see a little town smacked down in the middle of nowhere! We followed our friend Greg’s advice on this occasion and went straight to shore. From a very cold night it had turned into a very hot day! We trudged up the hill to our holy grail – the little supermarket! Holy avocado! Holy fresh milk!

We shopped for basics, pledging to return tomorrow. We made our way back down the hill. “Yes!” said M expansively, “We’ll go back to the boat and then I’m Going For a Walk!”

I looked at him like a dead-eyed mullet. I was too exhausted to speak without slurring.

“Yes,” he added as an afterthought. “You guys can come with me if you want to…”

His superhuman schtick lasted until we got back to Bella Luna, where, like me, he crumpled into bed and stayed there for quite some time. A few hours later we got up, had dinner, and collapsed again.