Heading up the Huon

What follows is a round-up of our last six days on the Huon River. The problem with getting comfortable somewhere is that there are always things to do and people to hang out with…and documenting non-sailing days gets pushed to the back of the drawer!

The weekend of the 25th of February gave us some glorious weather. I discoverd my favourite lane in Franklin – Walpole Lane – and wandered up and down with with Small Z, salivating hopelessly at all the blackberries… and cute houses… sigh… 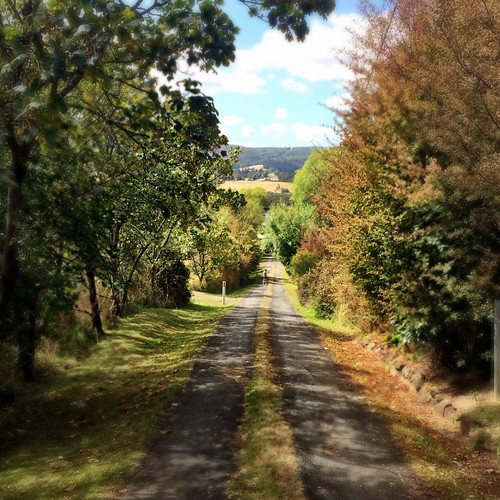 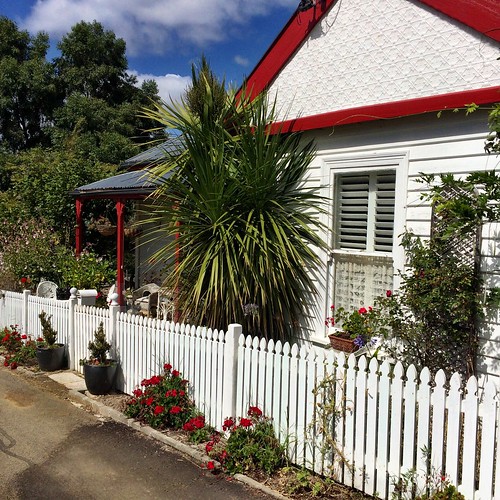 Later we went blackberrying at a place nearby that locals told us was not sprayed… It was excellent to finally fill up a container with berries. We all had stained fingers and purple tongues.

The market, that I had assumed we would not be still around to attend, was the next morning. Huzzah! It’s held at the beautiful old theatre, which also houses the local food/crafts co-op and is also a venue for music and films. Wandering around it was a joy… 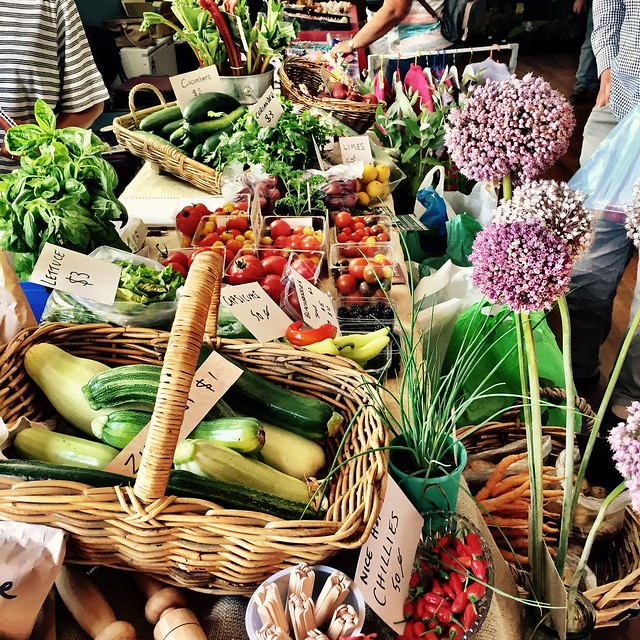 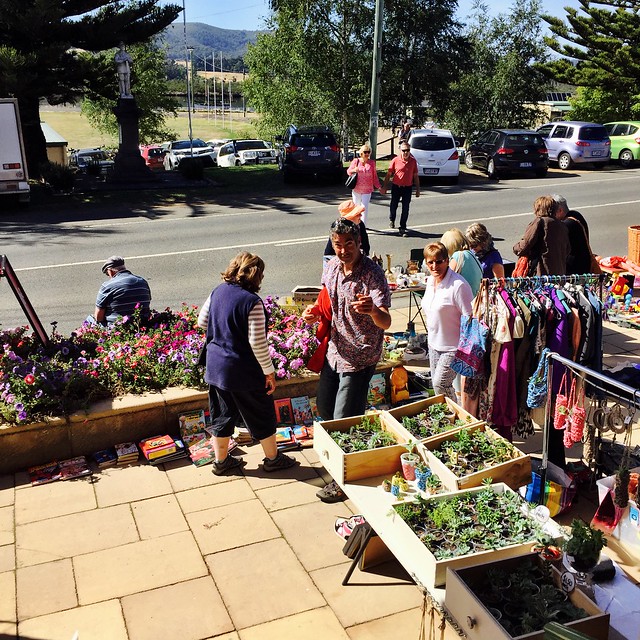 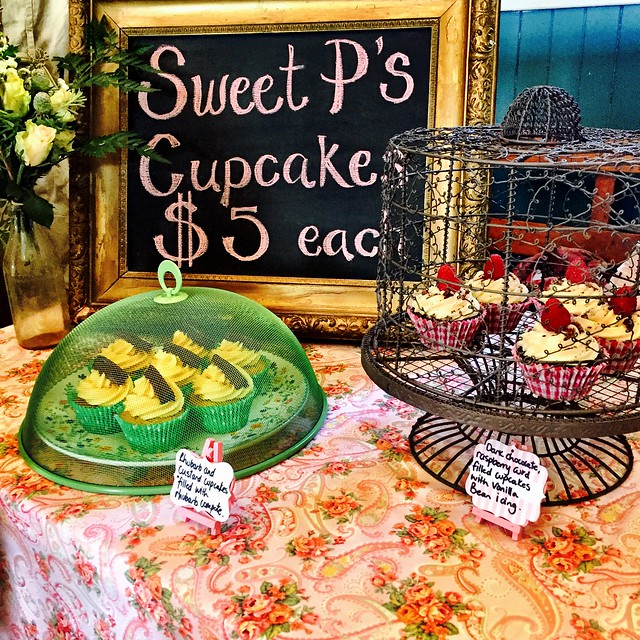 Those beautiful cupcakes! There were some chocolate ones labelled ‘Gluten Free’.
“You’ve got gluten free ones – that’s great!” I gushed at the woman selling them.
“Yes,” she said. “They’re made with gluten free flour.”
“Awesome! And the chocolate – that’s gluten free?”
“Ummmm. Actually…”

And there you go. A coeliac can never trust even the most well meaning people – because even while they’re trying to do the kind thing, they can’t know what they don’t know! They are unaware of the lurking possibilities of gluten in almost every goddamn thing….
But I digress… 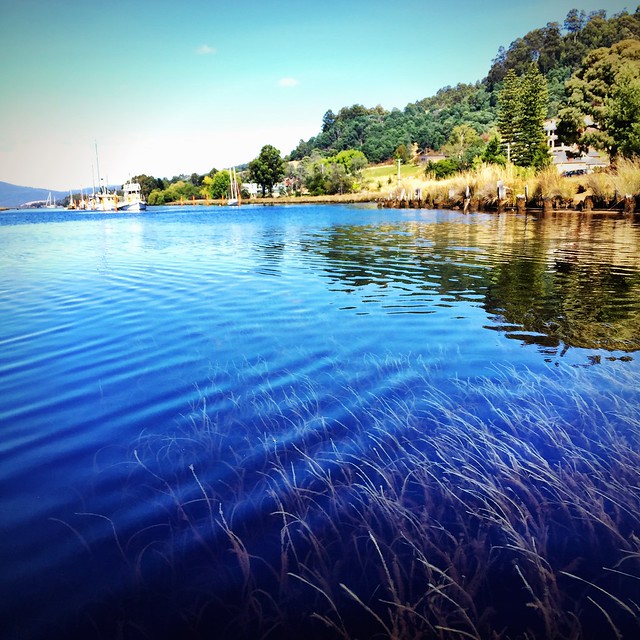 Straight after the market, we took Bella Luna for a long awaited trip further upriver. We had prevaricated for several weeks, trying to get a definitive answer about how high the electrical wires that cross the river are. In the end we were given so much conflicting information that on one of the days we had access to a car, M drove to where the wires are and checked them out himself. However, I think we both briefly held our breath as we passed underneath them… 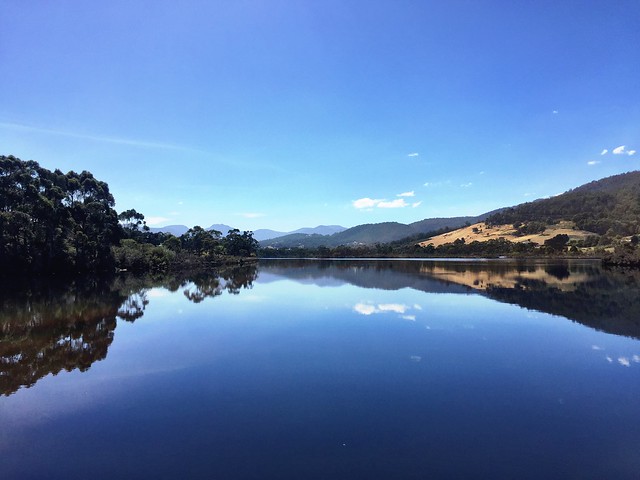 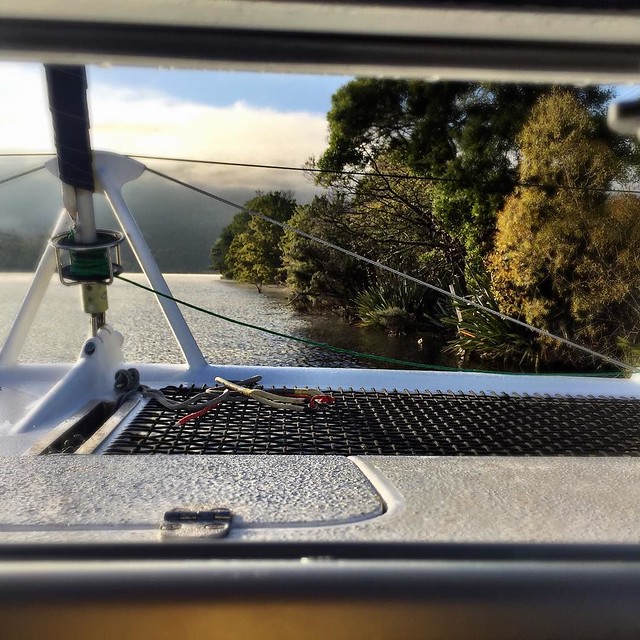 There’s a new spot to tie your boat up near the bridge in Huonville. The presence of the bridge means that pretty much any boat with a mast can go no further, so we were happy to see the new jetty – it’s well padded for tying up against, and very central. We were able to whizz straight across the river in Foamy to the playground and walk to the main street.

We spent time at the library, poked around in the op-shops and found a great secondhand bookshop at the back of a plant nursery… M was hugely impressed with their nautical section. 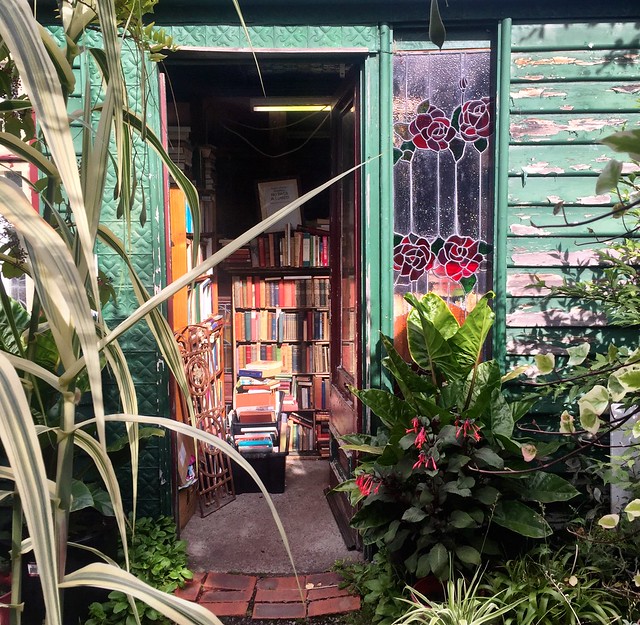 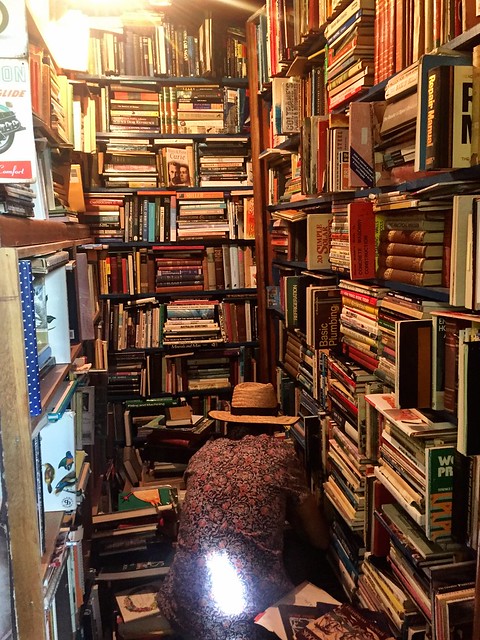 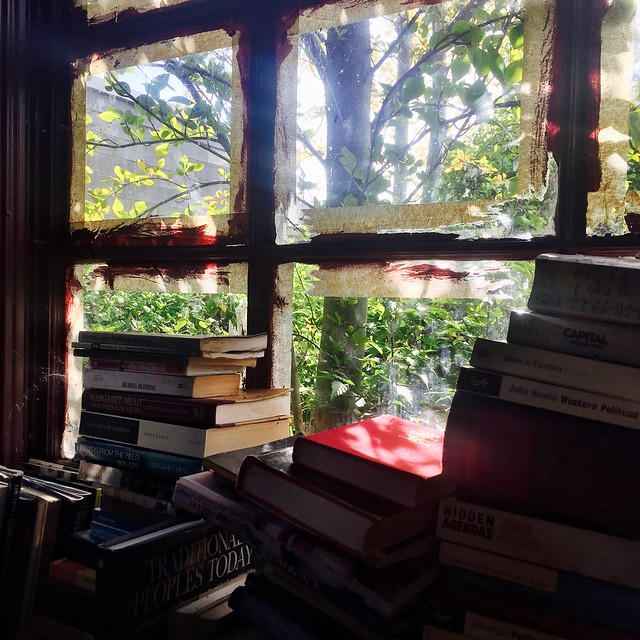 The whole point of our extended time in the Huon River was that we had ordered a new propeller from Baily Marine. But then they (and every other dealer in the nation) was crippled by a massive computer error that was affecting Yamaha Australia. Which was hardly their fault – but it kind of became less about Yamaha Australia and more about them, because:
– They called us and said it would be available on Monday, so we did our journey up the river. Monday came. It wasn’t there.
– They called on Tuesday morning. It had arrived!
– I went and picked it up. Brought it back. M’s eyes rolled back in his head. He grabbed it and stormed off back up the main street. They’d given us the wrong one…
– He returned with a secondhand propellor they’d lent us until the proper new one actually did arrive – why they couldn’t have given it to us ten days before was not explained.

After dealing with all the craptastic propellor crud, we got into Foamy and went exploring up the river. It was a bloody hot day – we were aiming to find some small rapids we had be told about, and maybe have a swim… 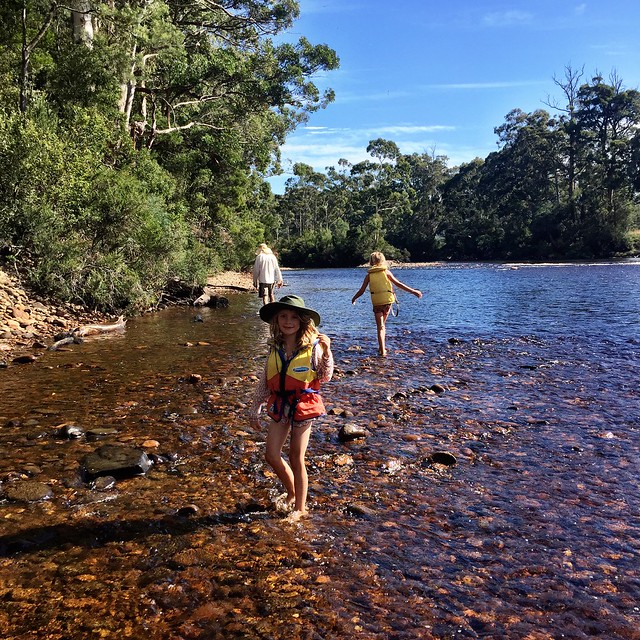 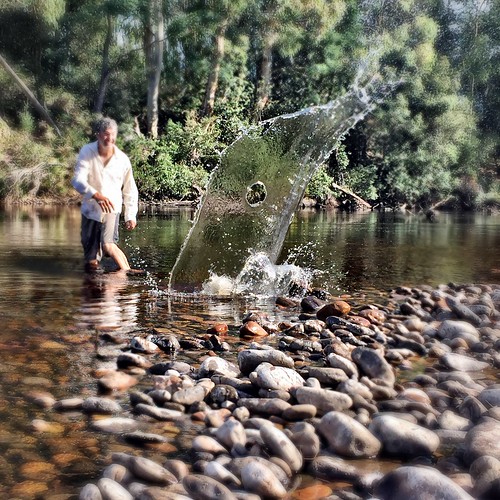 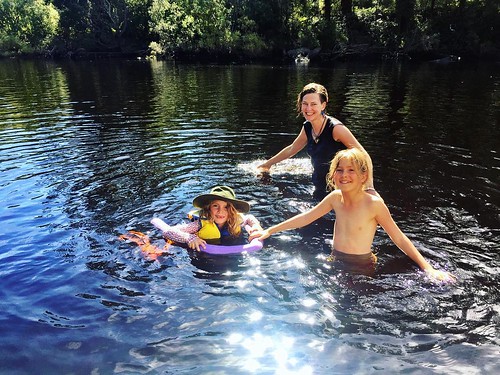 We had a brief chat with Steve Smith – one of the kayakers we passed – and he appeared very familiar with the river. He was on his way down to Huonville from Judbury. Check out his very short clip of a brown trout jumping out in front of him.

A late motor back down the river to Franklin – it was good to tie back up at the Petty Sessions dock, next to our new acquaintance Peter. Breakfasting the following morning we saw a familiar red boat sailing upriver – it was Apache!

Lovely to see our Hobart friend again! We dragged him blackberrying and apple-picking and tried to convey the delights of Franklin to him. Small DB climbed the apple tree (as her sister had done earlier that morning) and threw down apples to him. 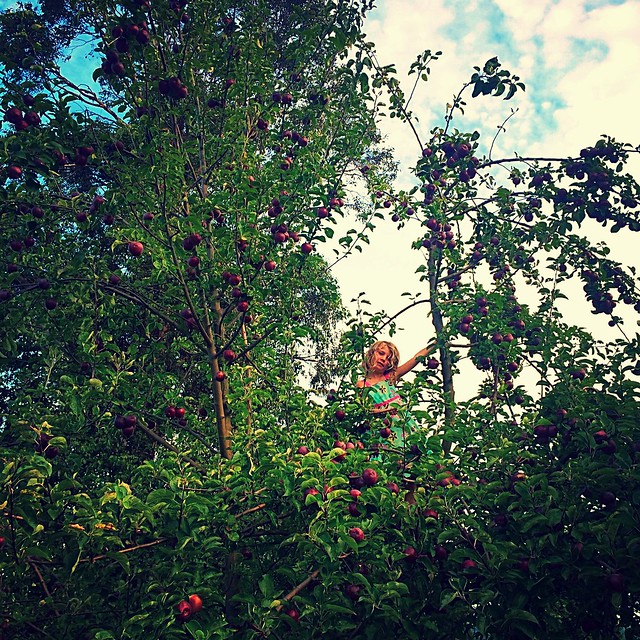