Two days after the departure of the Mothership and T, Mung and the boys turned up. The weather was inclement, but they seemed happy enough to spend a night on the mooring at the Royal Yacht Club of Tasmania (RYCT) and a second night in Hobart proper. 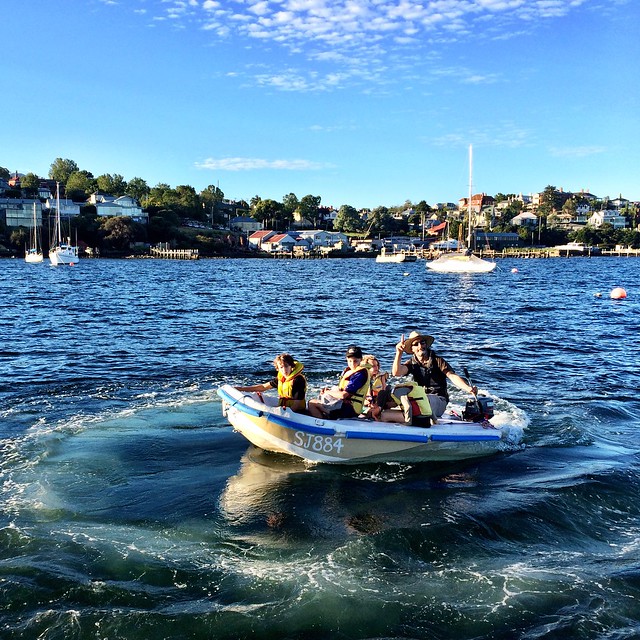 Those boys. If I could keep them, I would. They are so kind to the Smalls even though they are 11 and 13 – they had the Smalls fishing immediately. And if they weren’t fishing, they were playing cricket ashore. The Smalls did not look at an iPad for the entire duration of their stay. 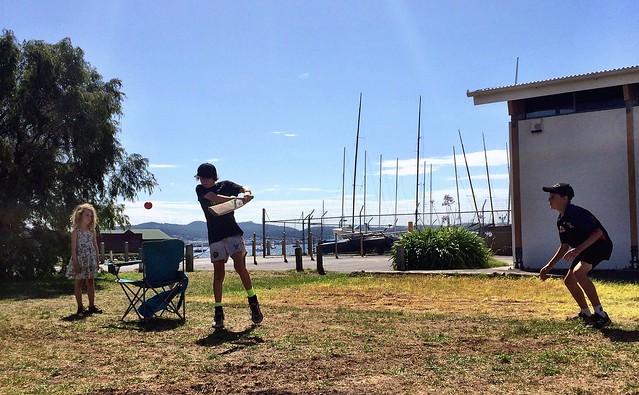 Mung took the Smalls and I to the shed where his friend Yves makes Miellerie honey. We drove from Sandy Bay past Kettering, Margate and Snug down to Woodbridge. Oh my. The bees, the beeswax, the machines, the HONEY. I was SO glad I had gone along – Yves gave us a fantastic tour and answered all my billion questions… Mung bought us a jar of my fave… 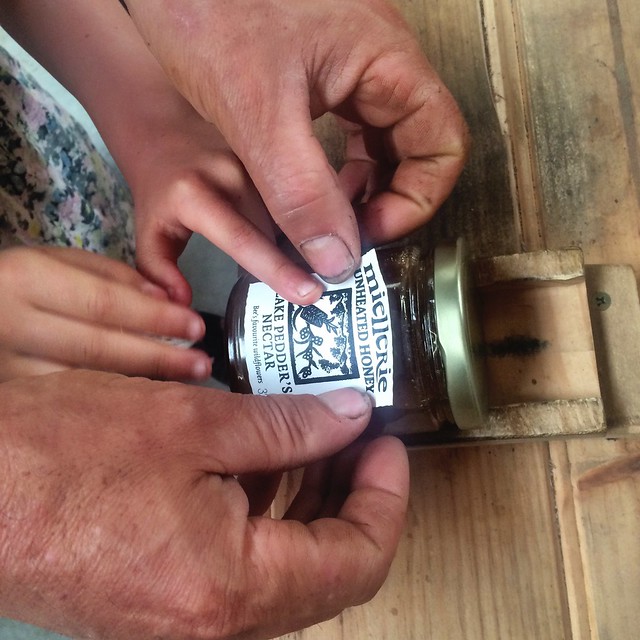 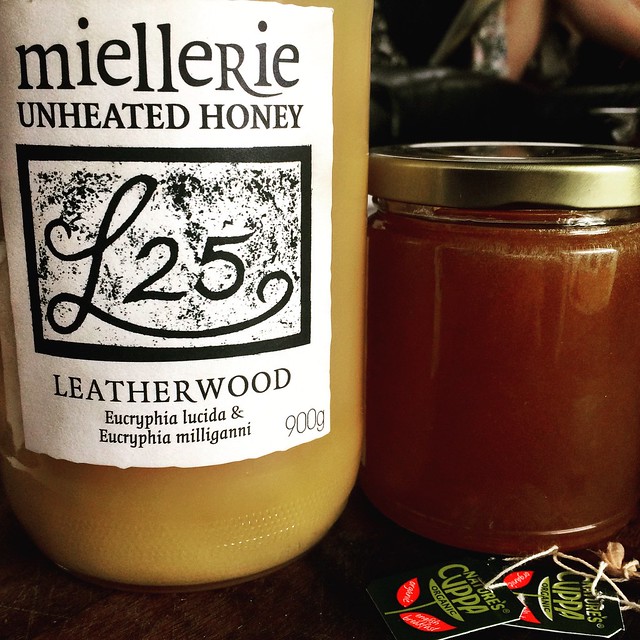 The darker honey is from the Christmas bush (Prostanthera lasianthos) and Yves has been trying to get enough of it to do a proper run of jars for about five years. This year, the bees have finally done it – he looked very happy when he told us this.

One of the many things I didn’t know about beekeeping and honey is the travelling involved – he has hives at Lake Pedder, out near Bay of Fires and many other places I can’t remember. Their honey is pure, cold processed – and different honeys are never mixed together.

We stopped at two other amazing places on the way back to Sandy Bay. The first was a roadside grocery store that had apples for $1 a kilo and pretty much everything else you could think of – all cheap. One of those places that we hear about but is difficult to get to without the use of a car.

Then I navigated us a ‘short cut’ (I use that term very loosely) to the South Hobart Tip Shop. 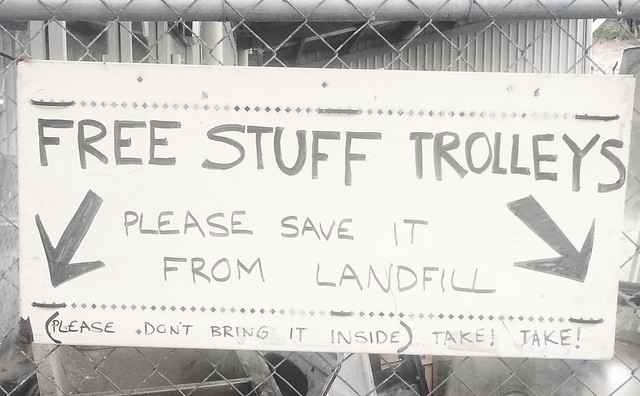 They basically had to drag me out of there – it’s an op-shopper’s Holy Grail. It has EVERYTHING. And EVERYTHING is cheaper than you could possibly imagine. I immediately bought a shopping trolley – something we have been looking for since October – hauling things back to Bella Luna in a haversack has got very old. 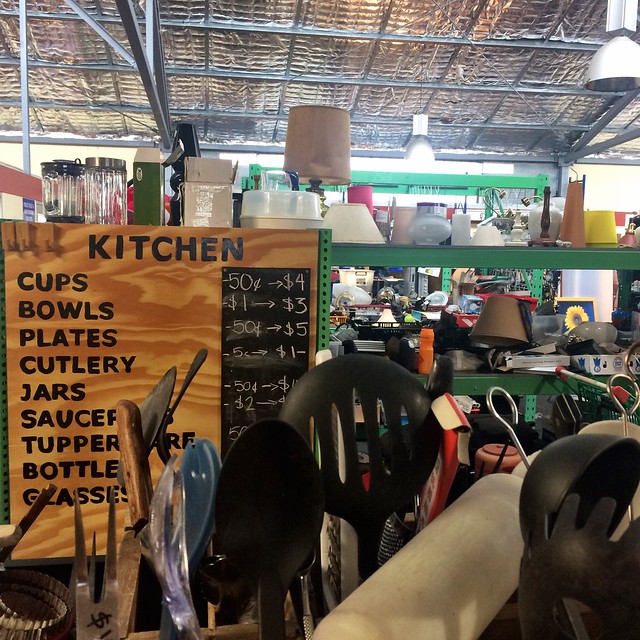 It was fully of marvellous things… Eventually Mung did have to drag us out of there, with me vowing to return. It made me want to go back to our days of Hervey Bay house renovation…

Back at the boat, M took us all on a noodle down the Derwent River. Luka steered as we sailed under the Tasman Bridge and Mung rolled his eyes and tried to control himself as M motored in circles conversing at the top of his voice with someone anchored nearby.

We headed into Hobart and spent the night at the dock, with the Smalls and the boys pulling in vast numbers of flathead, rendered plentiful and inedible by river pollution. This left the Smalls with some ethical dilemmas about fishing for sport rather than food – they have both since decided that they will only fish for the latter. 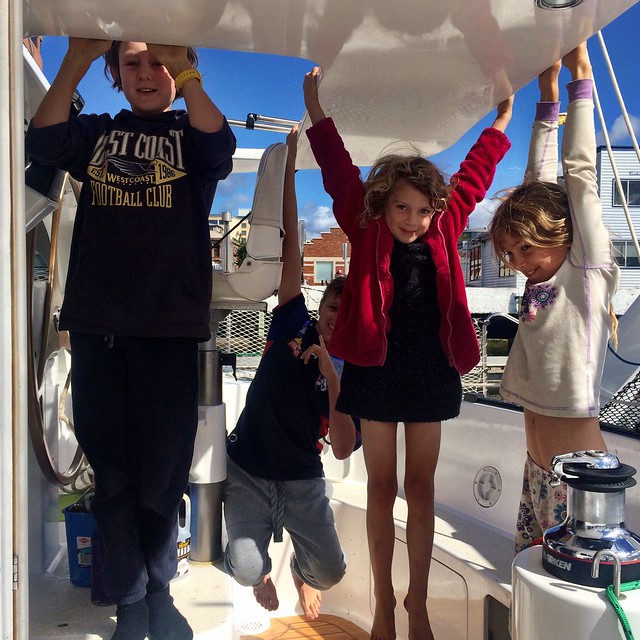