We were too skint to buy tickets to the Cygnet Folk Festival, but based on our previous folk festival experiences, we were pretty sure there would be a whole lot of stuff on for free anyway – CORRECT! The weather was hot. Hotter than I thought Tasmania got! We tried to keep to the shady places, browsed the market stalls and watched some music on the stage in the park. 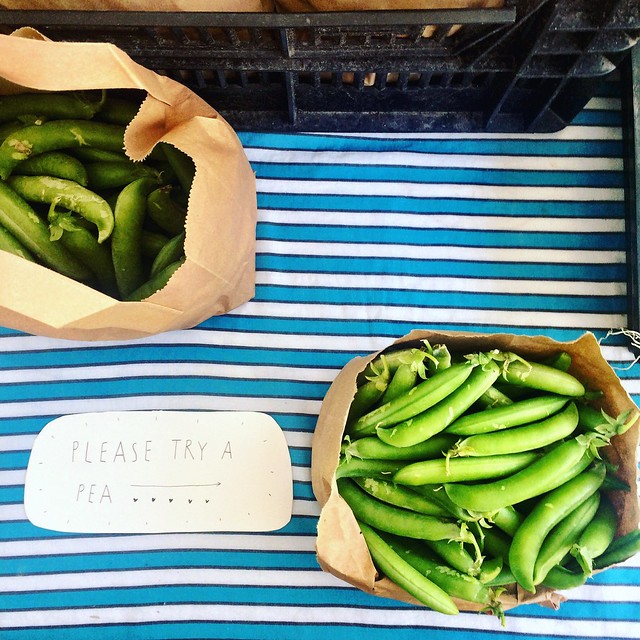 The Smalls were thrilled to see Woody’s World (veterans of Maldon Folk Festival) – and their day (and ours) was made vastly easier by the fact that the Mothership and T had a hire car and were able to ferry them from town to boat and back again. 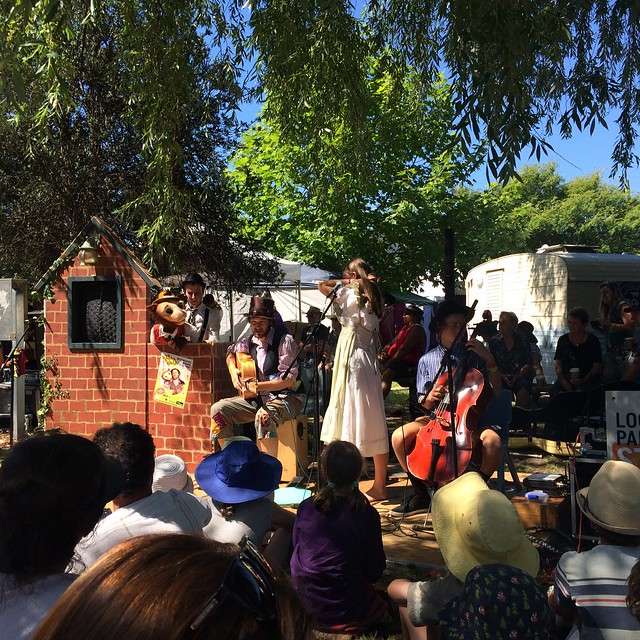 Inevitably we ended up at the pub with more chips. M and I tried to have a game of pool, pretending that our skills haven’t withered with the passing of the years. Then the Smalls wanted to learn… 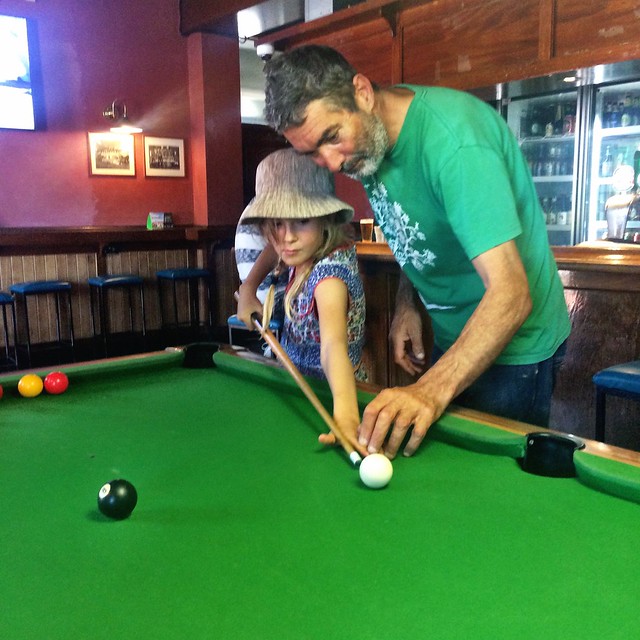 Later we had a drink in the back bar and an impromtu singalong with a lady who brought her guitar in… …and you won’t matter anymore….

Back at the boat we saw two boats that we’re familiar with Apache and Tardis – Grant, who sails on the former, paddled over in his kayak to return M’s cordless drill and stayed for dinner and, at Small DB’s invitation, a game of Cat Bingo… 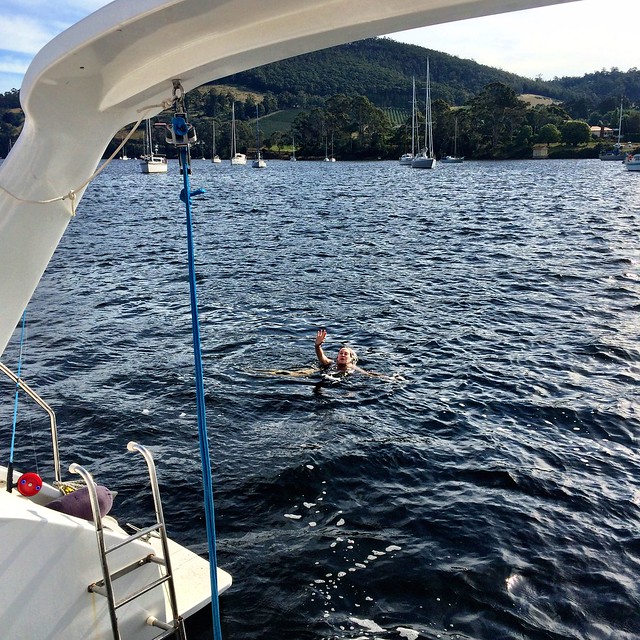 The following morning (after breakfast and Cat Bingo)… 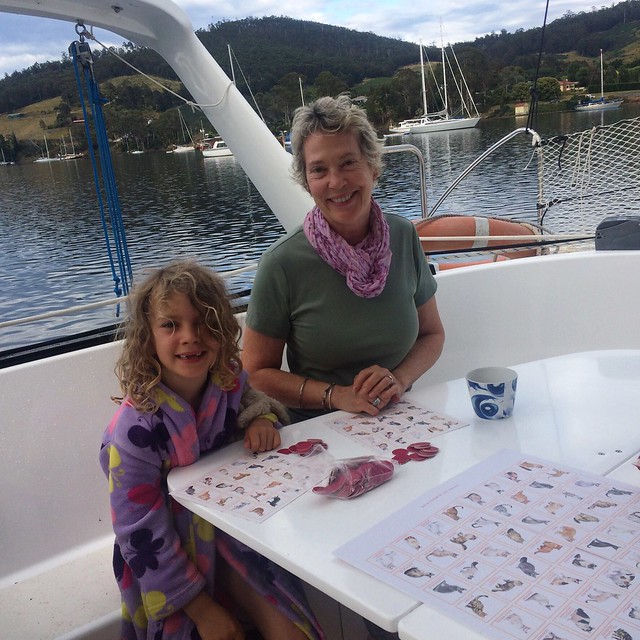 …the Smalls and I went driving with the Mothership and T along the scenic route that runs along the river. Grant had recommended the drive, and also an ‘amazing gluten free bakery’. We eventually found the bakery, which did look amazing, but was not remotely gluten-free. I had not brought anything for the Smalls to eat, so after visiting a little market in Judbury – where I bought punnets of spray-free raspberries for $3 each – we headed back to the Commercial Hotel in Cygnet for sustenance. 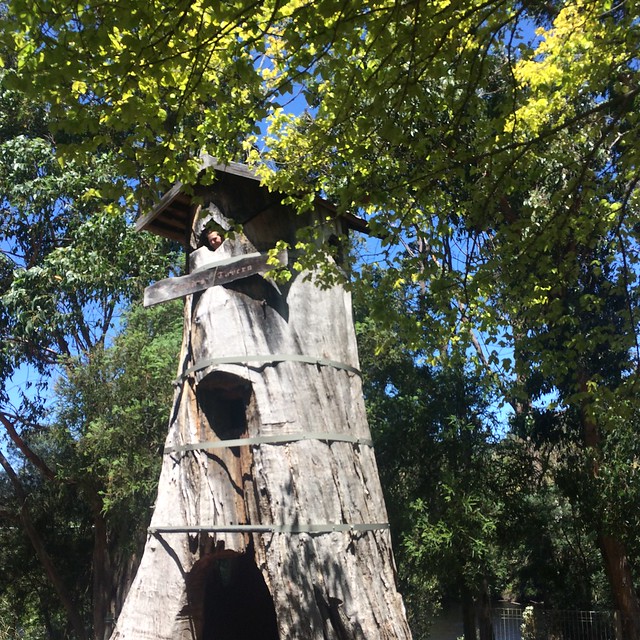 However, on the way I had a call from M. The anchor had dragged. Significantly. He sounded exhausted. Anchoring Bella Luna alone is doable but not ideal, but anchoring where the bottom of the sea is not anchor-friendly is bloody hard work – M had to motor into place, run forward, drop the anchor, tie on the bridle, run back, reverse to see if the anchor would hold, maybe put out a bit more line. He had been through this process more than five times, in addition to having the second anchor (we had a second one out – to no avail) wrap itself around the centreboard, then one of the ropes from Foamy got wrapped around the propellor.

Things were Not. Going. Well.

“I’m OK,” he said. “But of course it all had to happen in front of the sailing club – I was the entertainment. Someone actually motored out to help, but I told them I was fine.” A pause. “And we hit Jack’s boat.”

“Well, his boat’s fine – obviously – because it was built to go to Antarctica. I haven’t looked at Bella Luna. Haven’t had a chance.”

“Do you want me to come straight back?”

“Nah. Just keep an eye on your phone. I still don’t think the anchor’s right.”

To the joy of the Smalls, we went and lunched at the pub. I let them both eat their bodyweight in chips, because once we left Cygnet, where on earth else would there be any that were GF?

At 3.30pm I took them back to see ‘Woody’s World’ again – both Smalls got up on stage to demonstrate the ‘heel and toe polka’ – they had a ball… I sneaked off half way through to buy Small Z the dress she had been coveting, having told her that there was no way she would ever get it because it was waaaay too expensive…

The Mothership, not as enamoured of Woody’s World as the Smalls, had gone for a wander. T had sneaked off for a massage… And it was at that moment my phone rang. M.

“Can you come? The anchor’s dragging and I really need to get us sorted for the night. And I’ve got to dive down and get the rope off from around the prop. I really need a second pair of hands.”

I handed the Smalls to the Mothership and fled. Even as I walked as fast as I could back to the sailing club I had time to marvel at the speed one can travel if one is not encumbered by one’s offspring. The 20 minute walk took me about 12 minutes.

M was at the dock, and zoomed us immediately back to Bella Luna – who was looking suspiciously unperturbed. M, seal like in his wetsuit, slid into the water and had the rope unwrapped from around the propellor in about two minutes flat. He emerged dripping with relief. “I didn’t know whether that was going to take two minutes or two hours,” he said. “Right. Let’s try and anchor…again.”

We tried a few different spots. On the fourth attempt, the anchor held. I called T and said M would collect them all in ten minutes, please bring him some beer.