A few days ago, while freeing a shark from his line (the Smalls and I have instituted a ‘flathead only’ rule) M‘s fishing rod fell gently to the bottom of Wineglass Bay. Gone. We don’t have a lot of classy stuff, and the rod was no exception, having cost four dollars from Balnarring OpShop. However, M is fond of it, and having a fishing rod is better than not having a fishing rod.

After looking at the weather we had decided to leave Wineglass Bay late this morning. M was doing all the readying things above decks, and then squeaked excitedly.

It sounded as if he had seen a dolphin. I went over to look. Aquamarine water as clear as glass, and there, lying on the bottom, was the fishing rod. M donned his wetsuit. The boat, as boats will, swung gently on the anchor and we immediately lost all sight of the rod.

I was grumpy. My morning felt as if I had awoken in paradise and paradise had been mugged by parenting and domesticity. And, I had run out of tea and I couldn’t f!@#ing believe it – I had made sure M had coffee – THIRTY DOLLARS worth of coffee – but did I have any Nature’s Cuppa English Breakfast? I did not.

“Spot me,” said M. I nodded and continued wiping down grimy cockpit surfaces. I didn’t hear him plunge in. I glanced up. He was waiting.

“Spot me. I’d rather not be eaten by a shark. So spot me. It’s called being a dive buddy.”

He spoke the last two words to me too loudly and too slowly. As if he had no sense of self-preservation tied to his knowledge that I had No TEA.

I went over to the side of the boat and obediently fixed my eyes on the water, inwardly wondering how I was to alert him if a shark appeared while he was submerged. Or whether I would. He descended, sylphlike, into the water. I sang a brief shark welcome song…

“Bugger it.” He removed the mask and snorkle. “I’m going to have to use the dinghy.”

He rowed around the perimeter of the anchor chain and eventually found the rod. I have begun to realise, since we have left civilisation, that he often needs a sounding board for his thoughts – so as he shouted instructions to me about how to pinpoint the location of the rod – under the water, in the middle of the bay – I nodded agreeably and fastened my eyes on what he said was the spot, as he rowed back to the boat, re-snorkled, and jumped back in.

But not before saying, “Can you put the stove on? I’m going to need a coffee after this.”

My eyes were still locked in position. “How can I put the stove on if I am still LOOKING AT THE SPOT?”

But what, I thought to myself, what about the flocks of sharks that I am to see with my xray waterproof polarised vision? Do they come second to coffee? Very probably. I put the stove on and then zipped back on deck as the words,

“SPOT ME!!” wafted plaintively from the sea.

I realised, belatedly, that in telling me where the rod was, he had actually been telling himself – because he swam straight out, dove down (thank you weight belt) and reappeared like King Arthur holding Excalibur – the image only slightly tarnished by the mask, snorkle and reproachful looking fishing rod. Victory. 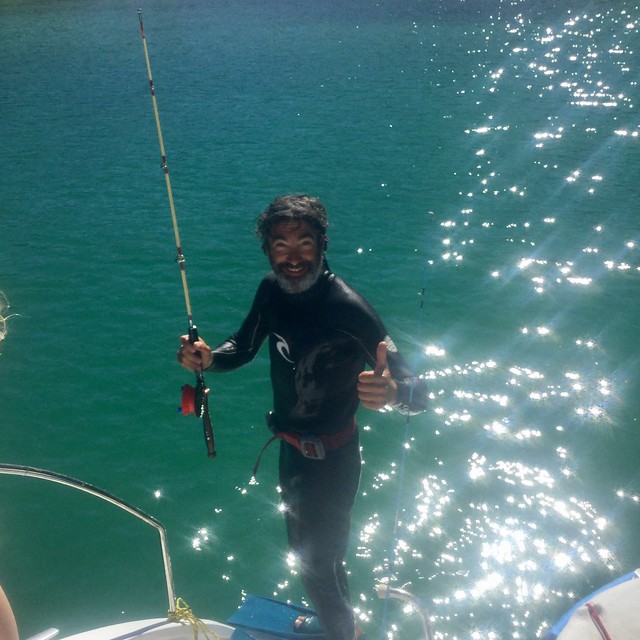 He’s good at diving for things, that M. Luckily. Because half an hour later, when he returned from an attempted diving endeavour orchestrated by Small DB in the shallows (during which she commented, “This water is as cold as a thousand melted icy-poles.”), he handed me the masks and snorkles, and I immediately dropped one of the latter over the side ?

I shook my head. “Nooooo. You’re already in your wetsuit. Noooooo….”

The boat began to swing around. Small DB was commanded to keep her eye on the snorkle that had begun to make its way, crablike, along the sea bed toward the ocean.

“Spot me,” said M, again. And swam down to retrieve it, returning intact a minute later.

“We shall never speak of this again.” 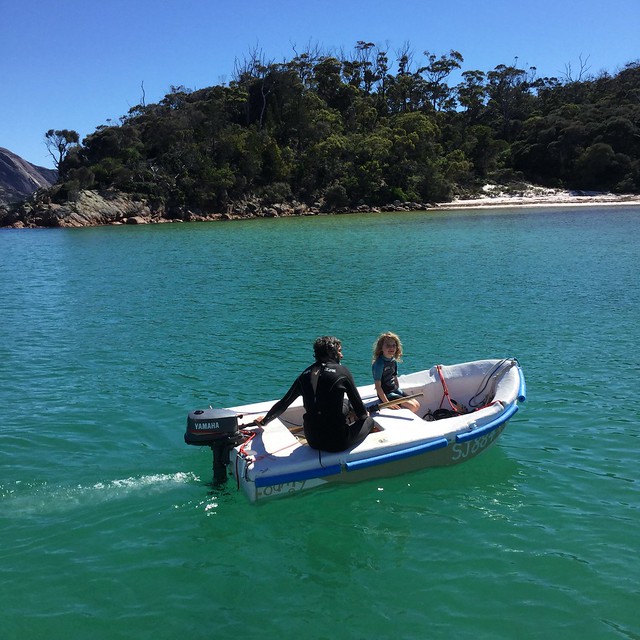 Further adventures with the Mothership & T